Earlier this year, I pulled off a feat that never in the past two years I would have considered a sure bet by any means: I got my two best girlfriends to meet me in the lobby of the Fairmont Century Plaza in Los Angeles.

We came from far (East Coast metropolises) and near (Culver City, Calif.,) for a “girls weekend,” a time-honored tradition that is now definitely doable thanks to the easing of pandemic restrictions and the need to reconnect with close friends and family. In our case, we desperately wanted to escape our homes — with kids and husbands, demanding jobs and Covid-era routines — and sip cocktails, get spa treatments, gossip by the pool and drink in the Southern California sun for a few days.

As a meet-up location, the Century Plaza was ideal.

The hotel just completed a top-to-bottom overhaul under the Fairmont banner, keeping its distinctive Minoru Yamasaki midcentury facade but shrinking the number of rooms to 400, overhauling the lobby, adding two residential towers and basically making everything fresh, new and luxurious. It reopened last year and is comparable in amenities and style to other L.A.-area luxury hotels.

I spent 24 hours as a guest of the hotel and during my time there hit most of its high points for pampering and fun. Here’s one way to spend your time, whether with friends, family, a solo getaway or business-travel break. 2 p.m.: Check-in. My room, a deluxe sunset-view double, was light, bright and airy. As a warmth-starved New Yorker, I immediately rolled open the balcony doors and enjoyed the afternoon sunlight (hence the name “sunset view”). And since the hotel is in Century City, built on part of the former Twentieth Century Fox backlot, it nods to classic movie lines with little quotes and sketches scattered around the room. A “Coffee is for Closers” note sits next to the Nespresso machine, a “Go ahead: Make my day” notepad is on the nightstand. My Angeleno friend darted around, taking pictures and exclaiming over the quotes.

Even with two beds, the room isn’t truly big enough for three women, their suitcases and accouterments. But there is a solution: adjoining rooms.

3 p.m.: Pool time. If there’s no rooftop swimming pool, are you even in a fancy Los Angeles hotel?

The Century Plaza’s rooftop setup is a must-visit, with 360-degree views and the Yamasaki-designed Century Plaza Towers as a backdrop. Living walls and teak-wood accents enliven the space. We staked out three comfortable loungers and settled in for a chat, pausing occasionally for a dip in the pool. The rooftop bar is not yet open, but guests can order room service for poolside delivery; starting mid-July Fairmont is also planning a sort of poolside picnic menu, with food and drink packaged and delivered in a cooler.

Checking in at the Fairmont Century Plaza 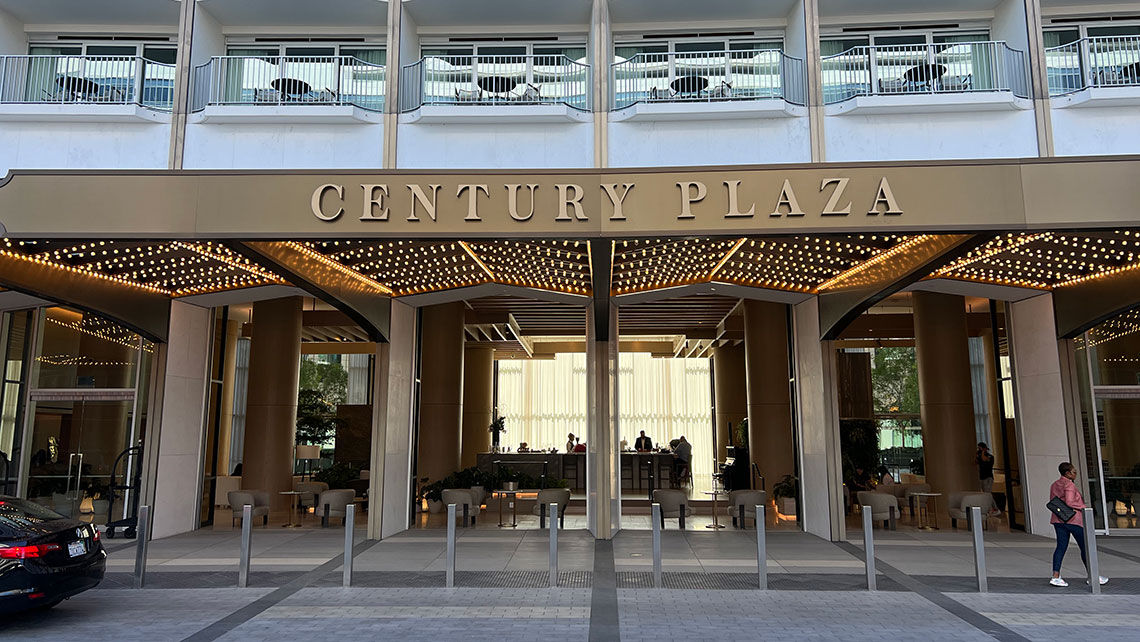 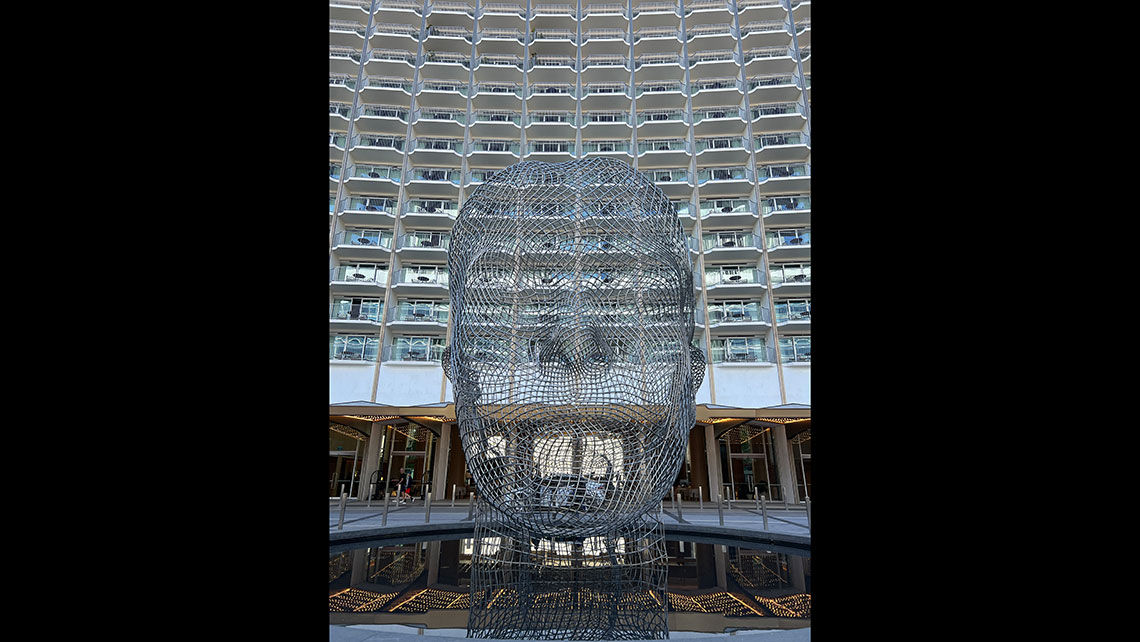 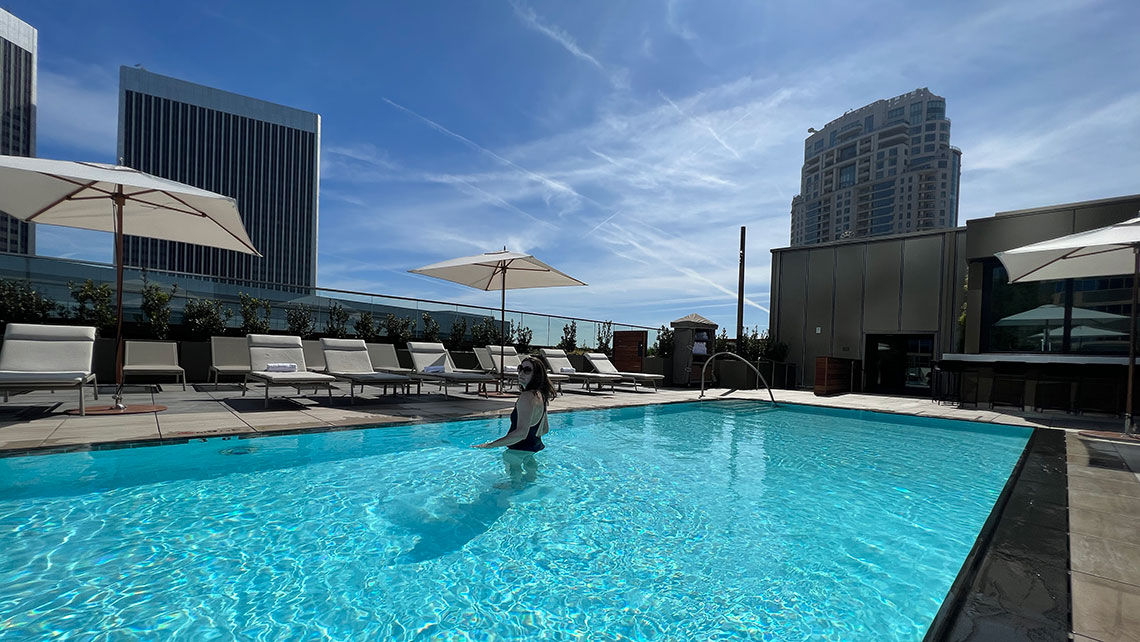 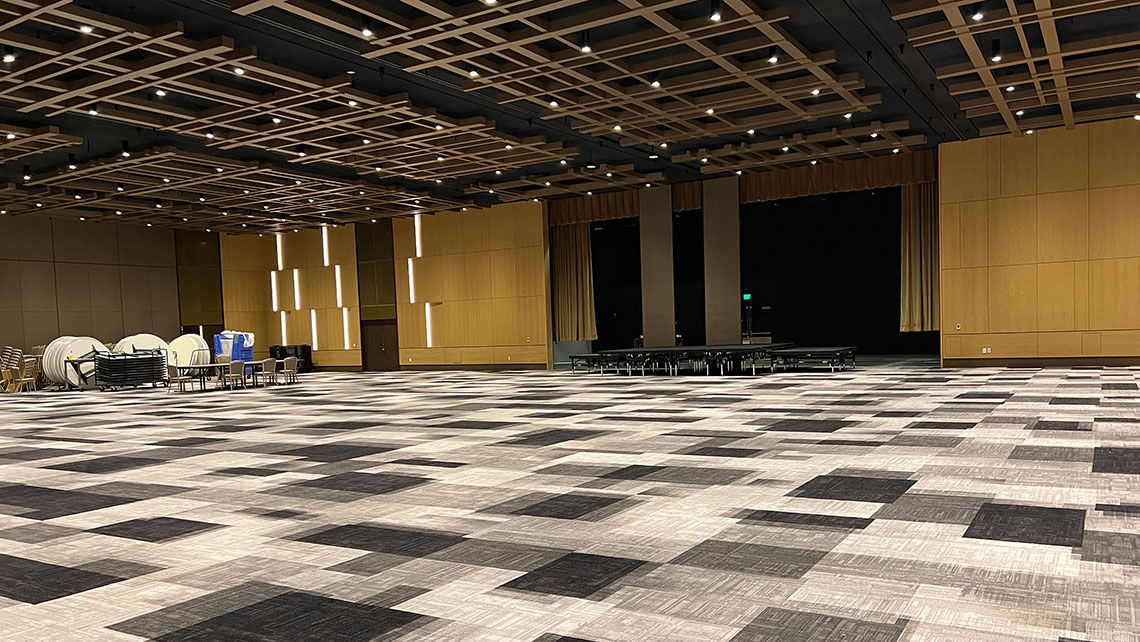 7 p.m.: Dining. The Lumiere restaurant is cozy and old-fashioned in a Paris-salon-art-deco-1920s kind of way; the restaurant’s designers scoured France and came back with vintage furniture and fixtures, which are arranged to delightful effect. For larger parties, a private dining room (with window access directly to the bar) seats 12.

And the food is sinfully good. I was strongly urged to try the chicken liver mousse, and now I pass the tip on to you: You won’t be disappointed. Put yourselves in the waiter’s hands and make sure you order a good red to wash it all down. Could there be star sightings, as well? Creative Artists Agency’s headquarters is just across the street.

Pre- and post-dinner: Lobby cocktails. The hotel redesign has incorporated high ceilings, extensive greenery, light woods and marble and achieved what every lobby designer hopes to do: create a place where people are eager to take a business meeting, grab a drink, chill or gather with friends. There is also a varied topography to the room, creating both front-and-center cocktail tables and nooks for more private drinks.

A pre-Covid decision to make most of the front wall into giant walls of windows that slide down at the touch of a button is paying dividends, as the room is basically an extension of the outdoors.

I recommend ordering creative cocktails from the music-inspired menu (more L.A. state of mind: the hotel’s elevator banks are nicknamed Sonny and Cher). 8 a.m.: Coffee. Groggy and jet-lagged? There’s nothing better for it than coffee on the balcony and the coziest bathrobes ever (not kidding; Fairmont, you win!).

10 a.m.: Spa. The Century Plaza is deceptively huge. A good chunk of the hotel is actually hidden underground, and it has extensive meetings and event space. But it also has a 14,000-square-foot spa. Think high ceilings, slate-colored tile and nine treatment rooms. It also has an enormous connected steam/salt/sauna room called the amenity space to which I’m partial, because I like the DIY aspect, and it is fun with girlfriends to try out different rooms, to be a part of a group but also create your own journey. (The men’s side is separate but equal, minus the salt and hammam rooms).

P.S. Since checkout is at noon, try to request a late checkout to take advantage of a cup of tea in its waiting room.

Post-checkout: In-N-Out Burger on Venice Boulevard. I mean, after the spa, how can you not? Girlfriends, let’s go!