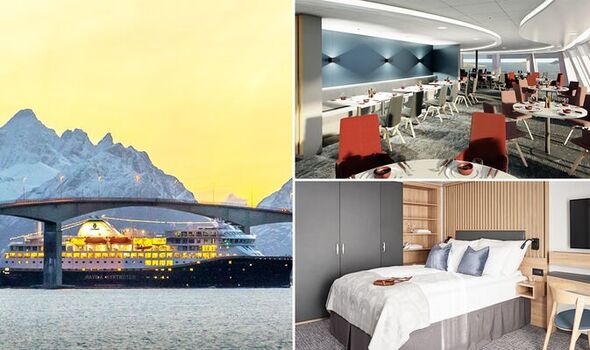 This is no ordinary cruise line. Havila Voyages’ first ship, Havila Capella, makes 34 stops every week as it calls at towns and cities between Bergen and Kirkenes before turning round and heading south again to make the same calls. With three more ships to come, the company has a 10-year Norwegian Government contract to deliver post and freight as well as passengers and offers seven-day north and six-day south-bound Coastal Journeys as well as 12-day roundtrips. Its ships not only run as foot-passenger services – and may be able to take up to five passengers’ cars if the hold isn’t full of freight – but they’re also cruise ships for people who don’t want a traditional cruise.

With Scandi-style public spaces and cruise ship-sized cabins, Havila Capella is pleasing and unfussy rather than flashy and frenetic and it’s one of the most eco-friendly at sea with the world’s largest battery pack to enable zero-emission sailing in fjords.

Sister ship Havila Castor will make similar journeys from May 2022 with Havila Polaris and Havila Pollux launching later in the year.

Norway has no vaccines or test entrance requirements at the moment and masks are not required anywhere, including on Havila Capella, although some people continue to wear them.

The main restaurant has sinks for hand-washing and a screen for taking your temperature before entry. Anybody over 38C has to stay in their cabin, where they will be monitored and meals brought to their door. Early flights home may be arranged.

It’s very peaceful and relaxed. Every day is a scenic cruising day but with multiple stops – some just for 10 minutes, others for several hours – and there’s always beautiful scenery.

Havila Capella is a small ship, with 179 cabins for 640 passengers and it’s nimble enough to sail through inter-connecting fjords almost within touching distance of the islands, islets and rocks that make Norway’s coastline so picturesque.

Virtually all public spaces and lounges have floor-to-ceiling windows with more than enough seating for those who just want to watch the world go by between ports.

Snow-capped mountains tower over tiny fishing communities and large towns alike but the scenery is constantly changing as the sun reflects off the sea and, in winter, the snow.

Usually snow falls from September or October, although it may not settle properly until late December and stays until March to May, with snow on the mountains year-round in the north.

The mix of nationalities onboard Havila Capella was mostly Scandinavian and German when I was onboard, although more Brits are expected now that flight and accommodation packages are available with selected travel agents.

All staff speak English and announcements are in English as well as Norwegian and German.

Although Havela Capella is a stylishly contemporary ship with regal navy blue and gold livery, the WOW factor is undoubtedly Norway’s spectacular scenery.

You are never far from the shore and you can look out to see snow sculpted hills and mountains in the winter months or green-covered slopes in the summer.

There are clusters of small villages along the coastal road, in some stretches with just the occasional house painted creamy white or blood-red.

Sometimes you can spot graceful bridges looping over the water to connect up the low-lying land and there are lighthouses along the way, many quaintly picturesque with a New England feel.

Because the ship docks three or four times during the day (and several times in the dead of night) you can sometimes disembark for a very quick look at towns well off the tourist track.

But when the ship stops for several hours there are several exceptional options organised by the excursions staff – from dog sledding, reindeer sledding and snowmobiling to visiting the northernmost point in Europe at The North Cape.

Cabins are a mix of blond wood and grey-blue furnishings but the most notable thing for a cruise ship that doubles as a ferry, is that they are comfortably spacious.

The standard outside cabins are described as Seaview Superior and are 15-20 square metres with a double bed or two singles plus sofa bed, although there are some Seaview Plus cabins for just two people.

Most have a large window but Deluxe and Panoramic View cabins have balconies, as do the Junior Suites. These have a sitting area with sofa separated from the bed by a central shelving unit that includes a TV you can swivel to watch in either section.

There are also two Lighthouse suites that are 45 metres square and have a separate bedroom and lounge plus balcony with a Jacuzzi. These take just two people, while the Junior Suites can sleep four.

There are also interior cabins that are 10 square metres and mostly used by ferry passengers, although they’re great for budget travelers.

What all the cabins have in common is a large flat-screen TV, free wifi, USB ports, good storage for clothes, tea or coffee-making facilities, hairdryer and most have a fridge but you’ll need a plug adaptor if you’re taking your own laptop or tablet.

Although the cabin’s shower rooms are small, unless you’re in a suite, they all have large non-removable containers of very nice body wash/shampoo and conditioner.

The food onboard Havila Capella is exceptionally good with locally sourced Norwegian dishes such as Jarlsberg and Norvegia cheese at breakfast, reindeer fillet at lunch and Vestland fish stew or Lofoten baked cod for dinner.

The main dining room, Havrand, sits at the back of the ship on deck six, with floor-to-ceiling windows that provide wraparound views as the ship hugs the coast.

Havila Voyages has decided against buffet meals, to reduce food waste and maintain good hygiene, but there is plenty of choice at all meals with the option to upgrade to Havila Gold menus for the whole cruise or on an a la carte basis.

This is because they are all small dishes. So the Pragerskinke breakfast ham, for instance, is a single slice and if you order the delicious scrambled eggs with butter and chives you have to order toast separately.

Similarly the lunchtime reindeer, although delicious, is a dish of four finger-sized slices so you’ll need perhaps a forest mushroom soup, Havrand’s green salad and potato of the day to go with it.

It makes for a leisurely meal, which works well as long as you don’t have to get off the ship. The longer stops, typically two to four hours, may come in the morning or afternoon and if they straddle lunchtime take-away picnics are available.

At dinner there’s a more traditional starter, main course and dessert menu, although vegetarians still choose from 10 or more small dishes such as crispy pea schnitzel or risoni with wild mushrooms.

Alternatively, you can eat at the Hildring Fine Dining Restaurant, where the five-course evening meal is an elaborate “salute” to the “cold, clean seas along the Norwegian coast and the best Norway has to offer”.

This includes kingcrab from Varanger, scallops from Hitra, pan-fried turbot and rack of lamb from Dovrefjell with cloudberries and herb crumble to finish. All delicious.

Apart from that there’s the Havly Café, also on deck six, where you can buy hot drinks and pastries any time of the day or room service, which is only free for suites.

Havila Gold packages cost £311 per person on the Round Voyage, £204 on the Voyage North and £178 on the Voyage South and includes a broader choice in the main restaurant, one evening meal in the speciality restaurant, unlimited speciality tea and coffee from the café and no cover charge for room service.

There also discounts on some excursions and items from the onboard shop, plus a sparkling wine welcome pack in your cabin.

If you just want a tea and coffee package, this costs £108 per person for Round Voyages and £60 for North or South – a single cup of cappuchino costs around £5 without a package.

The days slip by so quickly, even if you’re only off the ship for a few hours, because there’s always something to see from the deck or the comfort of a sun-filled lounge.

Even the two small gyms have floor-to-ceiling windows, so you can see the countryside, mountains and coastal communities.

There are also two large Jacuzzis on the open deck eight, with a bar and lots of comfortable chairs, and single-sex saunas inside – with swimming costumes compulsory.

The daily programme is available on cabin TV screens and consists of talks in the conference rooms on topics such as Viking history and the Northern Lights.

Most of those were in Norwegian and German when I was onboard, although there were a few English options and these will increase with the number of English-speaking passengers.

There’s no real dress code at any time on Havila Capella: it’s casual jeans and jumpers by day and only a little less casual by night, owing to the need to be able to go on deck at a moment’s notice to see the Northern Lights.

There are no after-dinner shows or day-time dance classes but most passengers see that as a bonus. Many spend their nights star-gazing and days just relaxing in a lounge or going to the occasional lecture.

But north-bound voyages include a good-humoured Blue Nose ceremony for passengers crossing the Arctic Circle for the first time.

It’s not mandatory but anybody who doesn’t mind getting wet can be baptised by King Neptune, who ladles an icy brew of cold water and icecubes down your back – then you’re handed a glass of something to warm you up.

Simple pleasures – just like the rest of this unusual and highly enjoyable cruise along the spectacular Norwegian coast.

Best Served Scandinavia currently offers Havila’s 11-night round trip (Bergen to Bergen) departing January 1, 4, 7, 9 & 12 2023 from £1,495 per person including return flights from Heathrow, overseas transfers, inside cabin on full board basis and one pre and one post-cruise night at Thon Hotel Orion, Bergen on a B&B basis (0207 664 2241; best-served.co.uk).

For more information on Havila Capella go to havilavoyages.com