The pandemic has been one long, perilous roller coaster ride for Hawaii’s tourism industry. So hoteliers in the Aloha State are hopeful that Gov. David Ige’s decision to reopen the state to visitors this month will smooth things out.

Even with international travel virtually at nil, Hawaii’s tourism industry was enjoying a solid pandemic comeback by midyear. July hotel occupancy was at 82%, just three percentage points shy of the July 2019 figure. RevPAR outpaced the July 2019 numbers by 17%, and average daily rate was $303, a 21% jump, according to data from STR.

But by the end of that month, the delta variant had arrived in the Islands, and a statement by the governor in late August discouraging nonessential travel quickly deflated Hawaii’s bounce. In September, the most recent data available, occupancy had cratered back down to 55%, and RevPAR dropped to $168.

“From late August to early October, our business was wiped out,” Dee said.

Kekoa McClellan, Hawaii spokesman for the American Hotel and Lodging Association, said the organization wholeheartedly supported the governor’s recommendation against travel during the surge, but nonetheless, the state’s hotels were hit hard.

Ige’s decision to reopen to nonessential travel will help, but McClellan said visitation is likely to remain depressed through the end of the year.

“It is exciting that we can welcome and support safe tourism in the Islands ahead of the holiday rush,” McClellan said. “But we are still looking at a soft holiday season, and hotels are responding accordingly. There are some great deals to be had on the islands for the remainder of the year.”

On the international-travel front, Dee said Outrigger expects a gradual buildup of foreign visitors, with a full recovery not coming until 2023. In Japan, Hawaii’s primary international market, residents are subject to a 10-day quarantine when returning from the U.S. 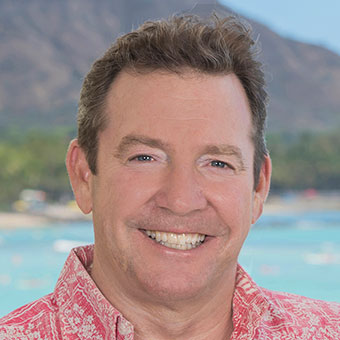 Hawaii is also still waiting on the return of group and business travel, which, along with easing capacity restrictions at businesses, will be key to bringing back more hospitality workers. Group travel in Hawaii is 77% lower than in 2019, McClellan said, representing a $1.5 billion loss to the economy.

“The return of international travel and the loosening of restrictions on meetings and events are extremely positive steps,” McClellan said. “Even if a hotel can be at 100% occupancy, it may not be at full employment. So many people work in the food-and-beverage, banquet and event sides of the house; without events and those activities properties cannot return to full employment.”

Now, with daily Covid-19 case counts below 100 and more than 70% of the state population fully vaccinated, there is hope the starts and stops to the recovery are coming to an end.

“I do believe we’re in the final push here, and I’m very optimistic about the festive season,” Dee said. “You never know what’s ahead, but I’m bullish on the near-term and the long-term.”