Bloomin’ beautiful: Stunning new coffee-table book unearths the world’s most amazing gardens, from the USA to Australia via England and the Palace of Versailles

Green-fingered or not, you’ll be mesmerised by the stunning images in this new coffee-table book.

Amazing Gardens of the World by Vivienne Hambly, published by Amber Books, is a lavishly illustrated compendium of ‘spectacular classic and contemporary gardens’, aiming to be a ‘wide-ranging celebration of all types of gardens around the globe’.

The book is packed with photographs of 100 different gardens, taking the reader on a spellbinding exploration of botanical traditions in Europe, ‘extraordinary’ gardens in Africa and verdant creations in Asia, before exploring the ‘panopoly of influences, styles and traditions’ in Australasia. The tome also showcases some of America’s most eye-catching leafy havens.

Readers will behold the carefully curated lawns of the Palace de Versailles in France, the futuristic inner-city Seattle Spheres that house Amazon offices, a breathtaking 18th-century English landscape and more.

‘Gardens are outlets for creative energy, offer respite from personal difficulty or provide [an] escape from the humdrum of life,’ Hambly writes in the introduction, adding: ‘The most forward-looking gardens have sustainability and biodiversity at their heart.’ 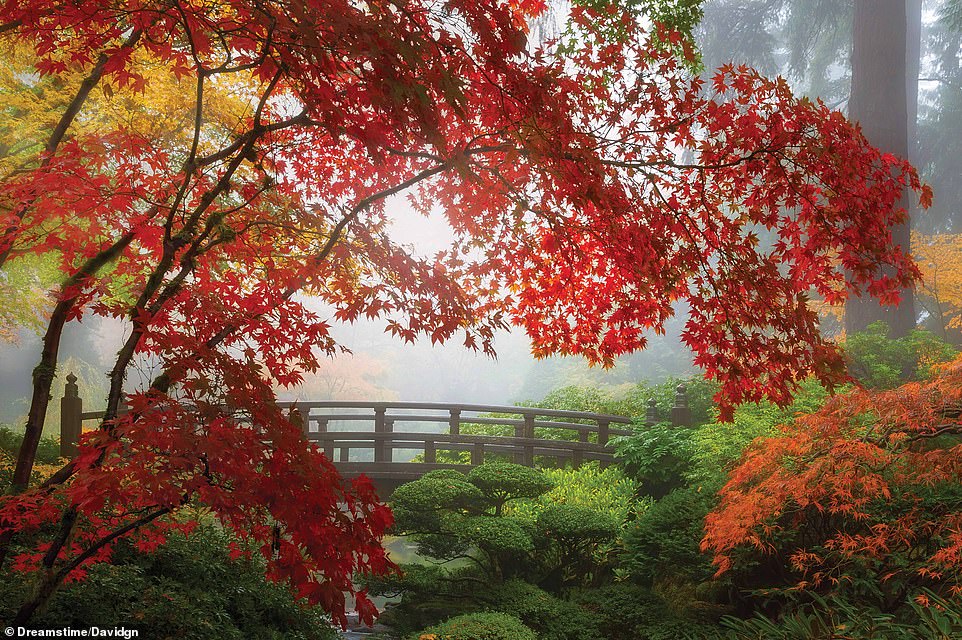 PORTLAND JAPANESE GARDEN, OREGON, USA: Explaining the history of this leafy haven, Hambly writes: ‘With a view of the city of Portland, this considered West Coast garden was borne of the desire to build relations between Oregon and Japan in the 1950s, post World War II – as were many other Japanese gardens around the United States.’ According to the author, the garden ‘opened to the public formally in 1967 although the garden continues to evolve, with development taking place as recently as 2017’ 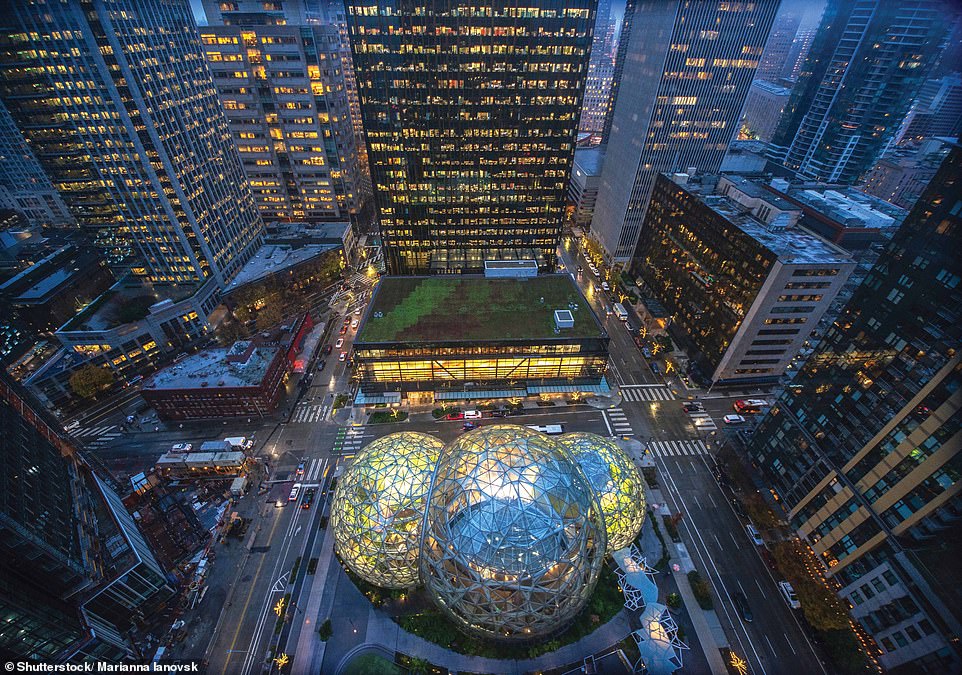 SEATTLE SPHERES, WASHINGTON, U.S: ‘Establishing a direct link to nature is integral to Seattle Spheres, the futuristic-looking office space used by Amazon,’ the book reveals. It says that ‘over 40,000 plants grow within the glass-domed building, specifically forming green or living walls’. Author Hambly adds: ‘The structure is a reflection of biophilic design, which is gaining traction in buildings around the world, from hospitals and classrooms to office spaces’ 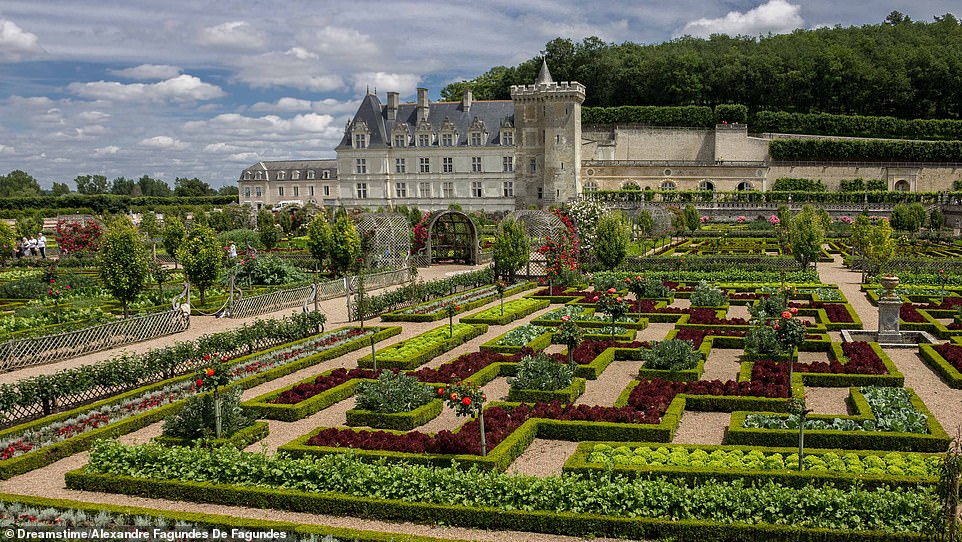 CHATEAU DE VILLANDRY, INDRE-ET-LOIRE, FRANCE: ‘In the gardens of the Renaissance-era Chateau de Villandry, organic productive spaces are among the most exceptional,’ the book reveals, adding: ‘In autumn, decorative cabbages jostle with leeks, late tomatoes, kale and squash. These particular spaces are the vision of Joachim Carvallo and his American wife Anne Coleman, great-grandparents of the current owner, Henri Carvallo’ 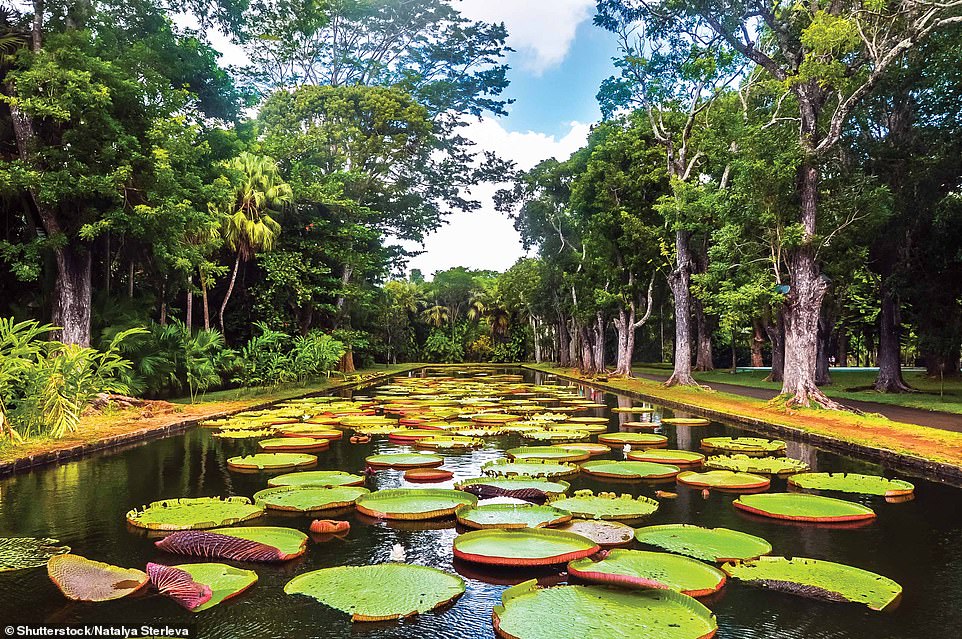 SIR SEEWOOSAGUR RAMGOOLAM BOTANICAL GARDEN, PORT LOUIS, MAURITIUS: This verdant space is the ‘oldest botanical garden in the Southern Hemisphere’, the book reveals. Hambly says that it was ‘established in 1770, when the island was a French colony and dominated by the French East India Company’. The garden ‘is named after the first prime minister of Mauritius and contains 80 tropical palm species’, the author adds 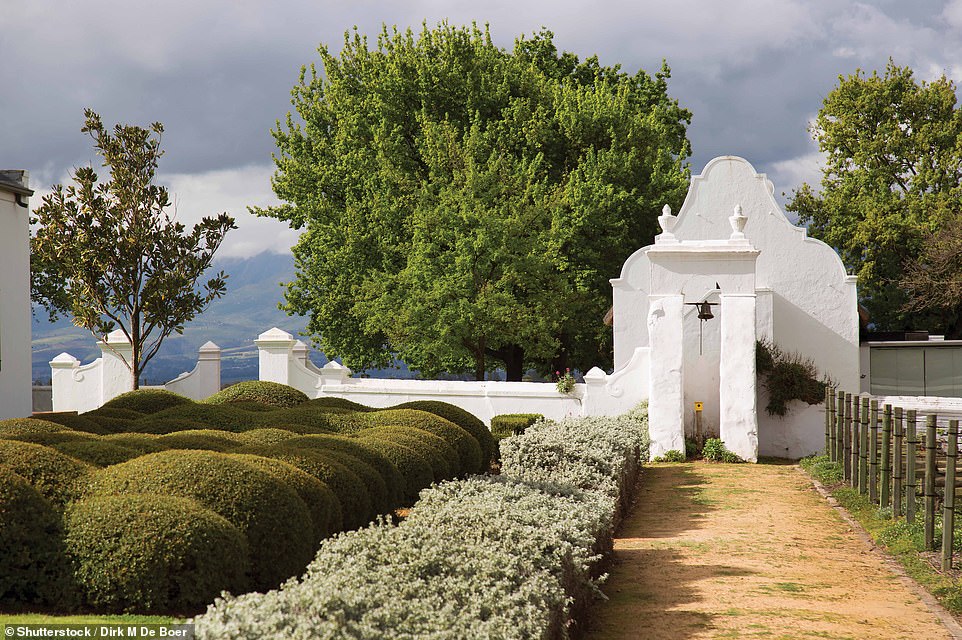 BABYLONSTOREN, WESTERN CAPE, SOUTH AFRICA: Behold Babylonstoren, one of the oldest Cape-Dutch farms in the country, but now a hotel. It has a ‘decorative productive garden of 15 “rooms”‘, we learn, created by French designer Patrice Taravella. The garden rooms are ‘set against the imposing Simonsberg mountain and include a prickly-pear maze, ponds planted with edible water lilies, and thousands of clivias which bloom in spring’ 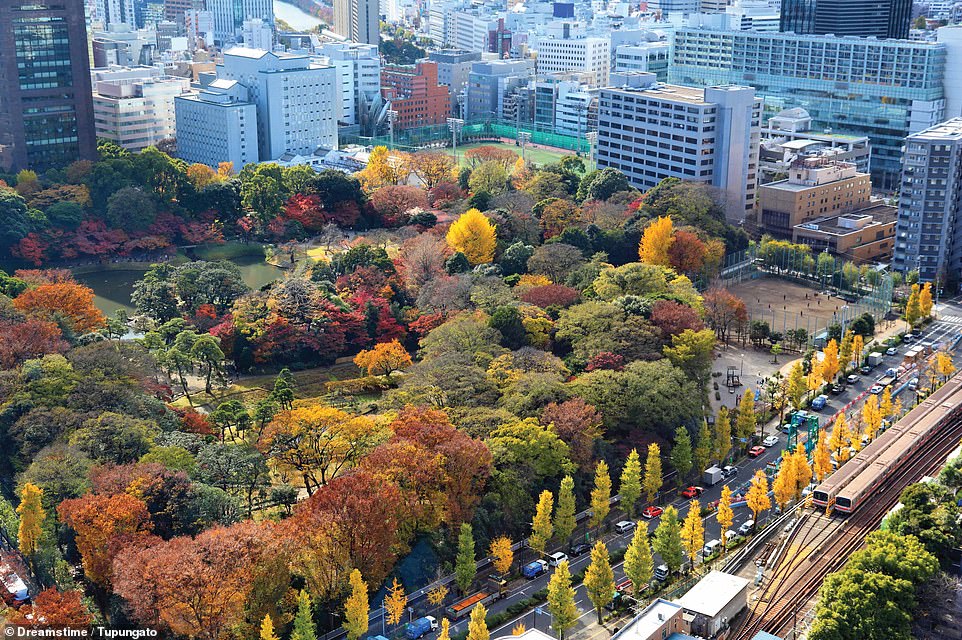 KOISHIKAWA KORAKU-EN GARDEN, TOKYO, JAPAN: Hambly observes: ‘Few could have imagined how important a green lung for the city of Tokyo this park would become back when it was built in 1629 in the Edo period.’ According to the author, this verdant space is ‘one of the oldest parks in the city’. She continues: ‘It was instigated by Tokugawa Yorifusa [a magnate in the Edo period] and remained in this ruling family until 1869, when it was ceded to the Meiji government.’ Want to visit for yourself? Hambly says that it’s ‘at its best in spring and autumn, when it is coloured with blossom and turning leaves respectively’ 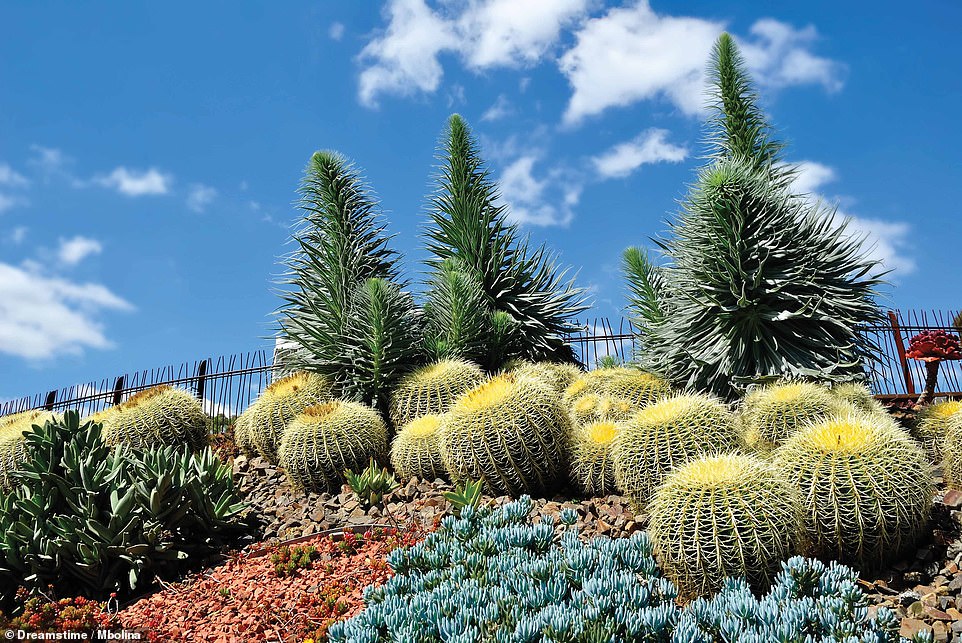 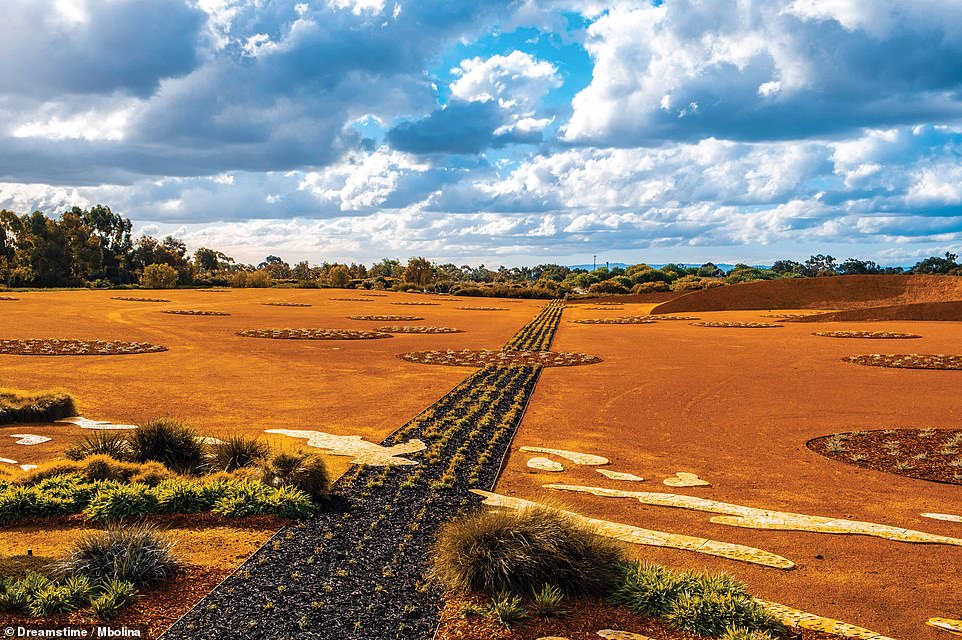 ROYAL BOTANIC GARDENS, VICTORIA, AUSTRALIA: Above is a second Royal Botanic Gardens site, in the suburb of Cranbourne. It ‘features a striking, contemporary dry garden planted with around 1,700 plant types from southeast Australia’ 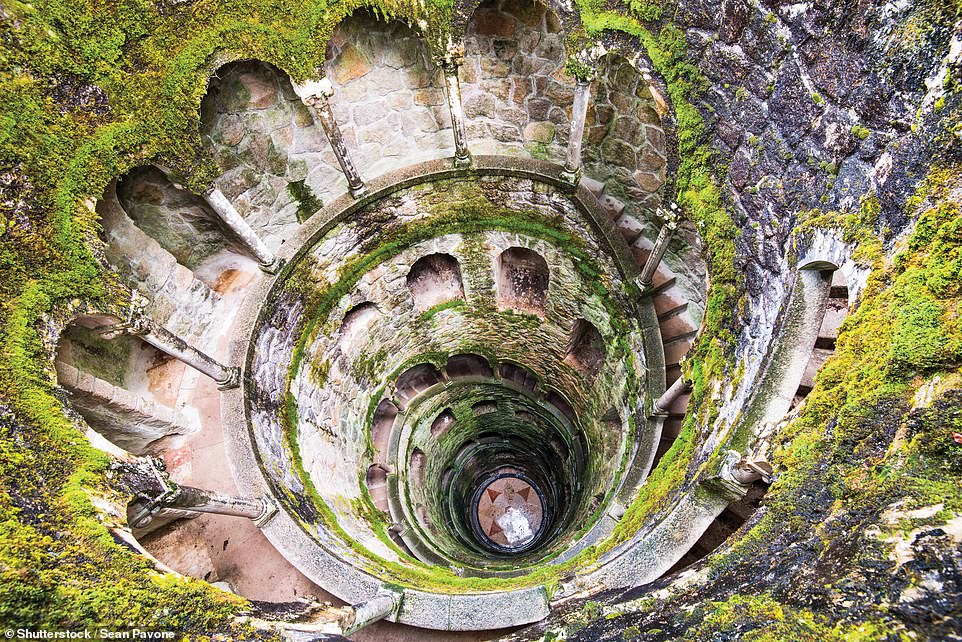 QUINTA DA REGALEIRA, LISBON, PORTUGAL: ‘In the wooded hills above Lisbon, the village of Sintra is the site of a number of remarkable gardens,’ says Hambly, adding: ‘Key among them is the Quinta da Regaleira palace, the 4ha (9.8-acre) grounds of which are a confection of grottoes, wells, fountains and lakes built for Carvalho Monteiro in the late 19th century by Luigi Manini, an Italian architect.’ She also notes that the complex is a Unesco World Heritage Site 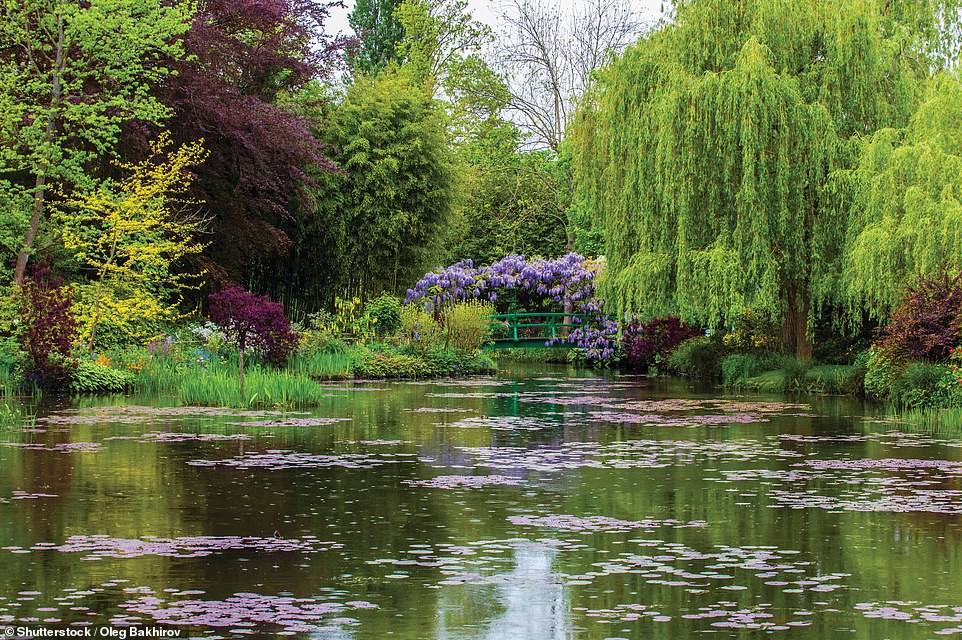 MONET’S GARDEN AT GIVERNY, EURE, FRANCE: ‘This most famous painter’s garden, begun in the 1880s, is a garden of two parts,’ the book says. ‘The Japanese water garden (pictured), some distance from the house, was inspired by prints the painter collected and it was later immortalised in his paintings,’ Hambly reveals. She explains that the second garden, close to the painter’s house, ‘focuses on symmetry and perspective achieved through flower beds, fruit trees and climbing roses’ 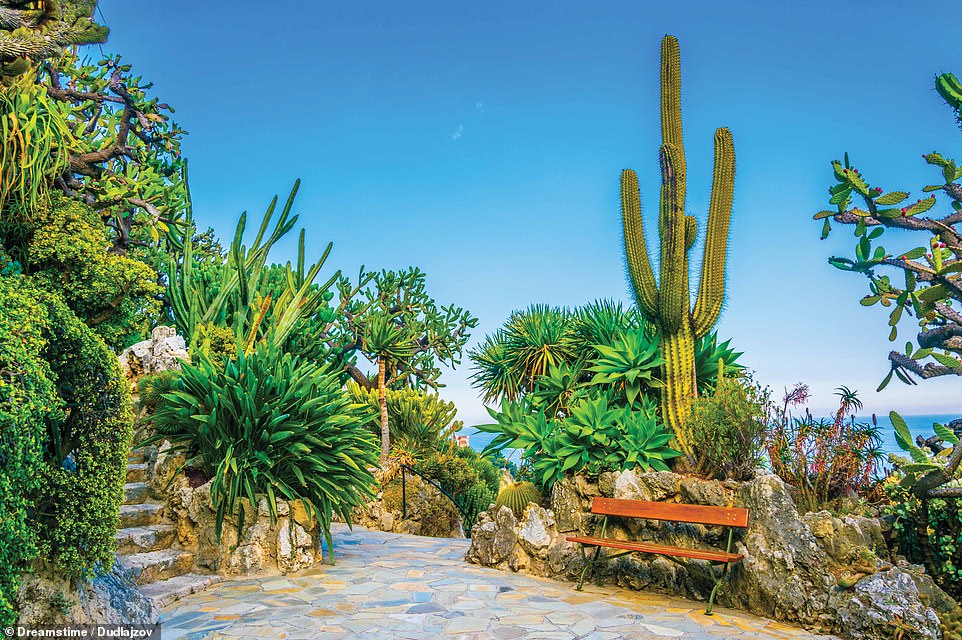 JARDIN EXOTIQUE, MONACO: Shedding light on the history of this stunning garden, Hambly says: ‘In 1933, the Exotic Garden of Monaco was built into a cliffside overlooking the Mediterranean.’ She continues: ‘A botanical garden, its striking setting is the ideal location for collections of succulents and cacti gathered from around the world. These collections were started as early as 1865’ 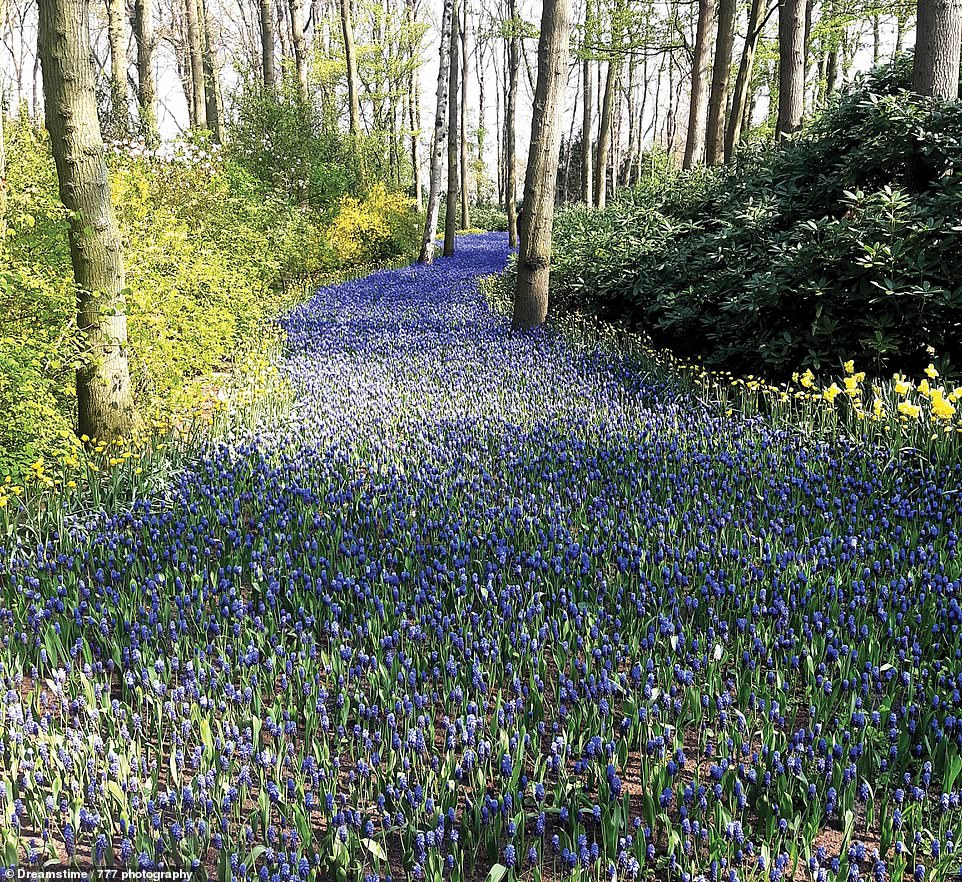 KEUKENHOF, LISSE, NETHERLANDS: The book says of this Dutch haven: ‘Now described as a living catalogue of the work of 100 bulb breeders, Keukenhof reflects the bulb and cut-flower growing heritage of this country, which reached its infamous peak in the tulipmania of the 17th century.’ According to the author, ‘around 500 growers of cut-flowers’ take part in nearly two dozen flower shows here annually 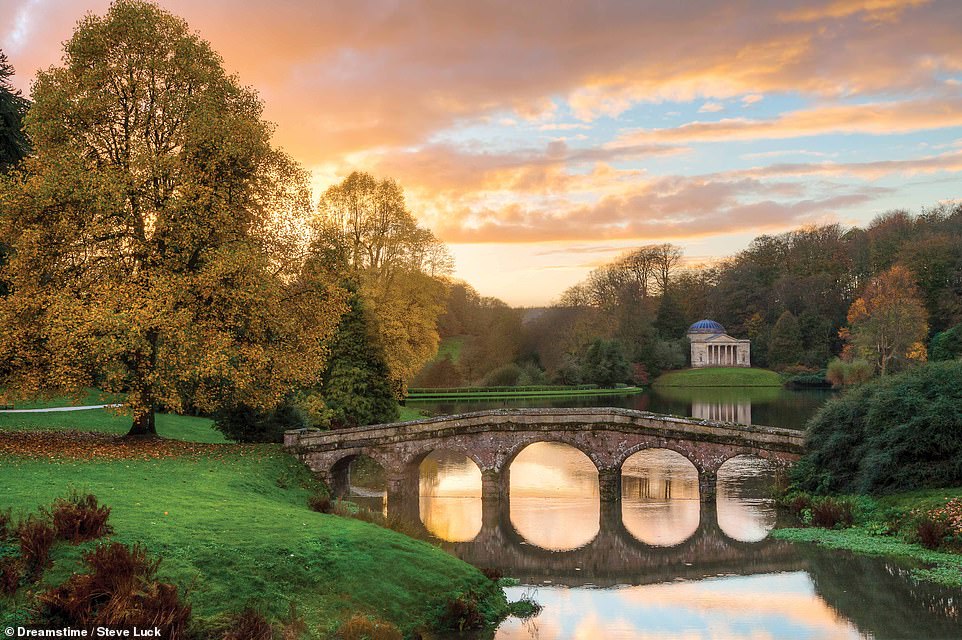 STOURHEAD, WILTSHIRE, ENGLAND: Describing the history of this estate, the book says: ‘The property of the Stourton family for half a century, Stourhead came into the possession of the Hoares, the banking family, in 1717. The house, one of England’s greatest Palladian mansions, remained in the family until 1949, when it was given to the National Trust.’ Hambly says that the ‘surrounding mid-18th-century gardens are in the English landscape style’ and boast an ‘artificial lake and views framed by classical follies and monuments’

PALACE DE VERSAILLES, ILE-DE-FRANCE, FRANCE: Louis XIV ‘placed as much emphasis’ on the manicured gardens at the Palace of Versailles as he did the building, the author reveals. She says: ‘In 1661, he instructed Andre Le Notre to create, over four decades, what would become one of the world’s most admired gardens. The intensely formal designs include parterres, clipped hedging, fountains and canals.’ The book adds that ‘aspects of this Unesco World Heritage Site were replanted in the early part of this century’ 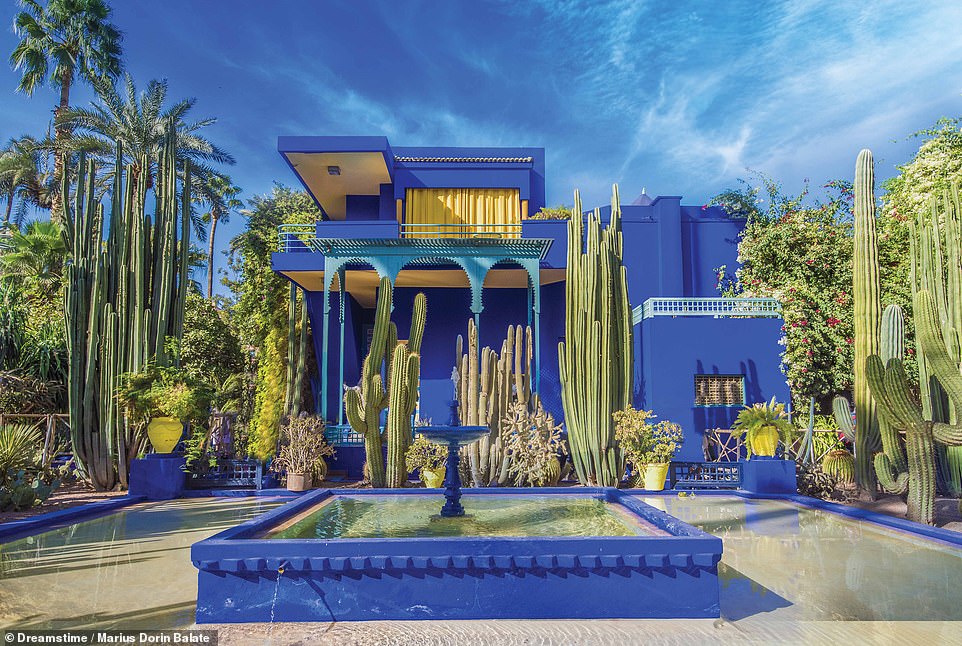 JARDIN MAJORELLE, MARRAKESH-SAFI, MOROCCO: This ‘extraordinary’ garden is ‘one of the most striking and best-known in Africa… originally the work of French painter Jacques Majorelle’, the book explains, adding: ‘The artist began work here in 1924 and painted walls, fountains and rills in a distinctive cobalt blue he had seen used in Amazigh or Berber communities’ 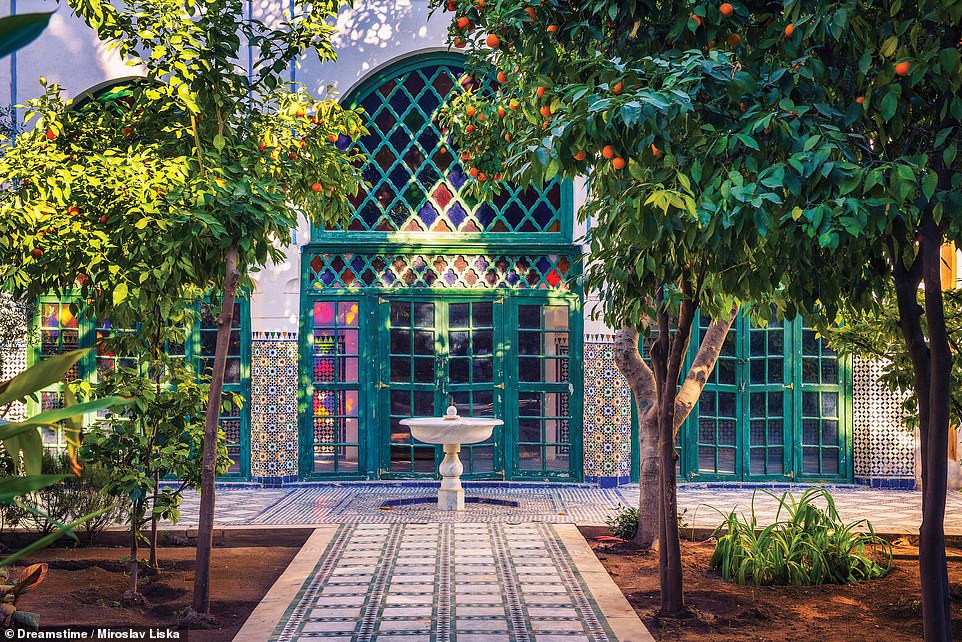 JARDIN MAJORELLE, MARRAKESH-SAFI, MOROCCO: Jardin Majorelle was bought in 1980 by the fashion designer Yves Saint Laurent and Pierre Berge, his partner, the book notes. It continues: ‘Their intention was to restore the property, which had fallen into neglect after Majorelle’s divorce in the 1950s and death in 1963. The Musee Berbere is at the heart of the garden and contains Amazigh artefacts initially collected by Majorelle. In 2017, a further museum housing the items from the collection of Yves Saint Laurent and Pierre Berge was opened. The ashes of Laurent, who died in 2008, are scattered in the garden’ 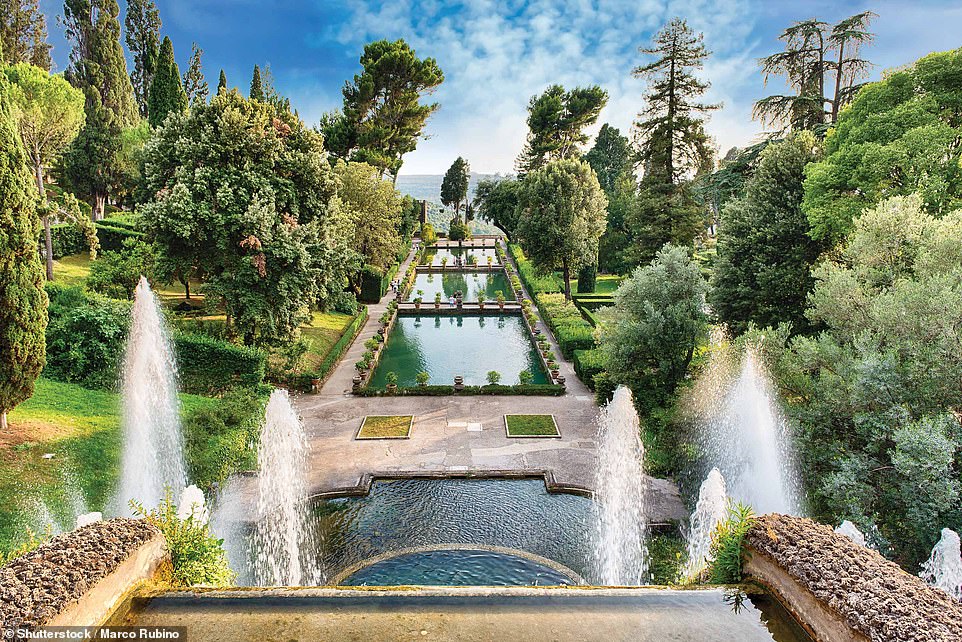 VILLA D’ESTE, LAZIO, ITALY: Of these magnificent gardens, Hambly writes: ‘One of the most famous gardens of all, Villa d’Este in Tivoli is a superb example of Renaissance design and has provided the pattern for many subsequent garden designs.’ She says that the Unesco World Heritage Site ‘was laid out by Pirro Ligorio, for Cardinal Ippolito II d’Este of Ferrara in the mid-16th century’. The author adds: ‘Two slopes descend to a terrace in which water features heavily.’ According to Hambly, the Fountain of Organ in the gardens ‘is an early feat of engineering’ 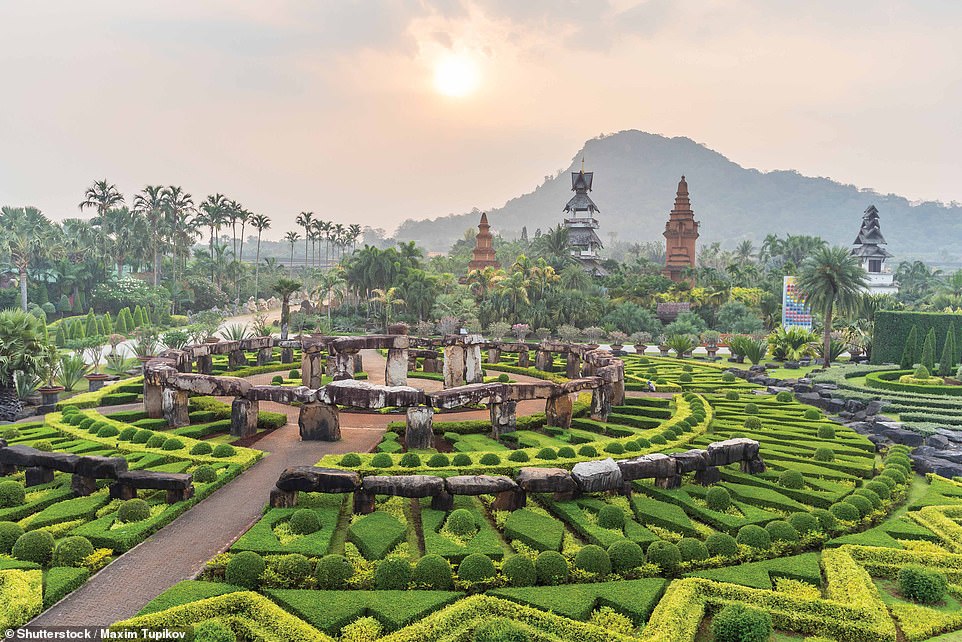 NONG NOOCH TROPICAL GARDEN, PATTAYA CITY, THAILAND: ‘Spread over 200ha (500 acres), this tropical garden is one of the largest in Southeast Asia,’ the book reveals. It continues: ‘At first it was intended the land would be given to a commercial plantation but upon seeing ornamental gardens abroad, the owners changed tack. Opened to the public as a tourist destination in 1980, today its extraordinary attractions include palm, orchid and cycad collections, a Thai topiary garden, French and Italian-style gardens, and Stone Henge garden’ 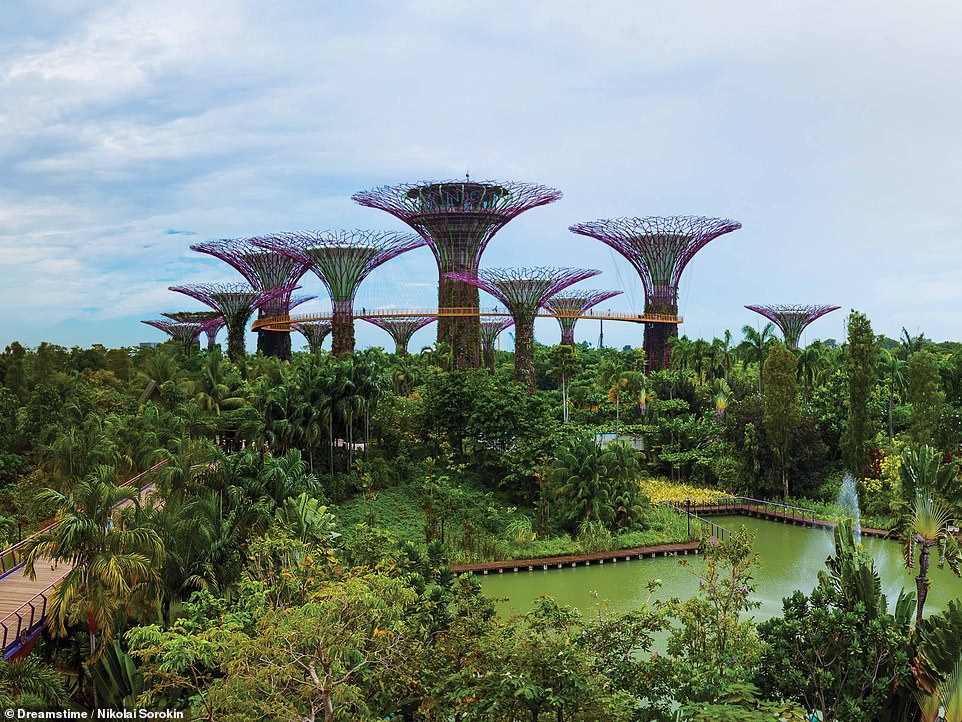 GARDENS BY THE BAY, SINGAPORE: ‘Hundreds of thousands of plant species from around the world are assembled in this vast public garden covering over 100ha (247 acres),’ says Hambly. What can visitors expect to see? ‘Domes, skywalks and cloud forests and the world’s largest glass greenhouse may be found here,’ she says, adding: ‘Opened in 2011, the gardens have a strong sustainability focus, with features such as photovoltaic cells [devices that turn the energy of light into electricity] contained within the garden’s iconic Supertree Observatory’

THE HIGHLINE, NEW YORK CITY, U.S: Filling readers in on this New York landmark, Hambly says: ‘From a disused railway line in New York City’s Meatpacking District has emerged one of the most compelling gardens in the world. The Highline, designed by master of the New Perennial movement Piet Oudolf, is a sinuous, 2.3km- (1.44-mile) long elevated park with planting designed for all seasons of the year.’ She adds that the park is ‘maintained and operated by the Friends of the Highline’ 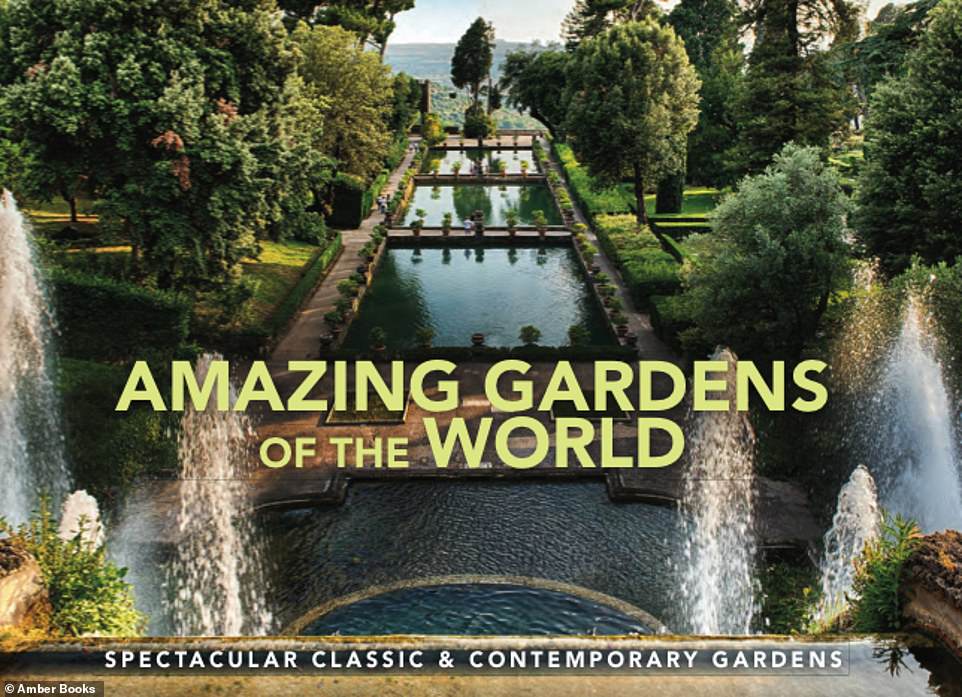 All images are from the book Amazing Gardens of the World by Vivienne Hambly (ISBN 9781838861988), published by Amber Books Ltd (www.amberbooks.co.uk), which is available from bookshops and online booksellers for £19.99