The best way to enjoy Britain is by ambling through it on foot – so here we reveal the country’s most breathtaking hiking routes (and remember, the slower you travel, the more you see!)

The slower you travel, the more you see. And there’s no slower way of travelling than walking. Most of us, with stops for tea, ice cream, admiring views, peering at insects, and re-tying laces, average about two miles an hour.

This is absurdly slow for the instant-gratification modern world. Instead of skimming the surface, like impatient damselflies, walking takes you deep into the landscape. There is simply no better way of coming to understand a stretch of country, its history and customs, its people and wildlife, than by ambling through it on your own two legs. A walking break over several days develops its own magical rhythm. Here, we recommend some of the best UK routes. 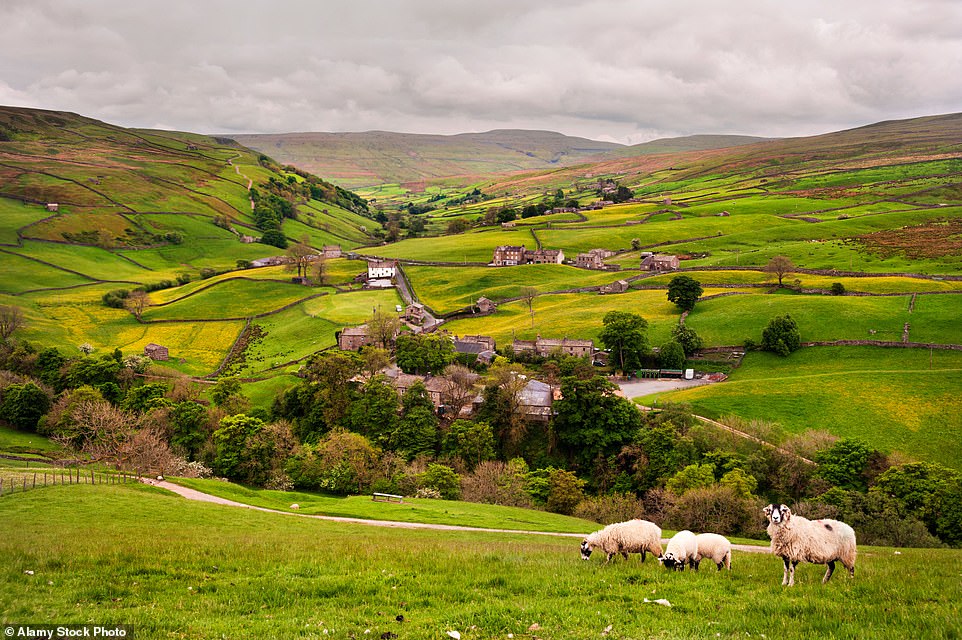 God’s own walking country: The hamlet of Keld in the Yorkshire Dales, which features on the Coast to Coast trail

For some, the ‘Coast to Coast’ will always be the single most magnificent long walk in the UK.

Devised by Alfred Wainwright (who dedicated one of his Lake District guidebooks to his own legs), this outstanding, fairly demanding hike traverses rugged northern England from the Cumbrian coast at St Bees eastwards to Robin Hood’s Bay on the North Sea.

You cross the high fells of the Lakes, the Yorkshire Dales and the North York Moors. Ramblers Holidays offers this epic in two segments, since it is a good 15 days to do the whole 190-mile route. The first day alone covers 15 miles and some 2,300 ft of ascent. This is a hike of a lifetime. 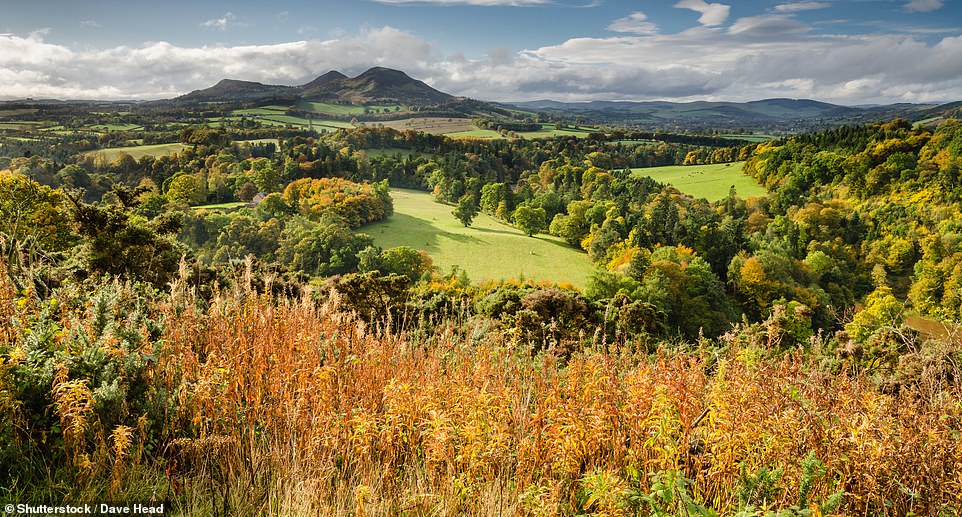 While walking the 62-mile St Cuthbert’s Way, you’ll pass through the Eildon Hills, pictured above

The 62-mile St Cuthbert’s Way, straddling the border between England and Scotland, is simply wonderful. This is Sir Walter Scott country, too.

Over six or seven days you’ll walk from Melrose, birthplace of the much-loved Anglo-Saxon saint, through the Eildon Hills, along the bonny Tweed, and visit St Cuthbert’s Cave.

An amble to the coast and across the famous tidal causeway to Holy Island, St Cuthbert’s last resting place after his death in 687 AD, is a must. 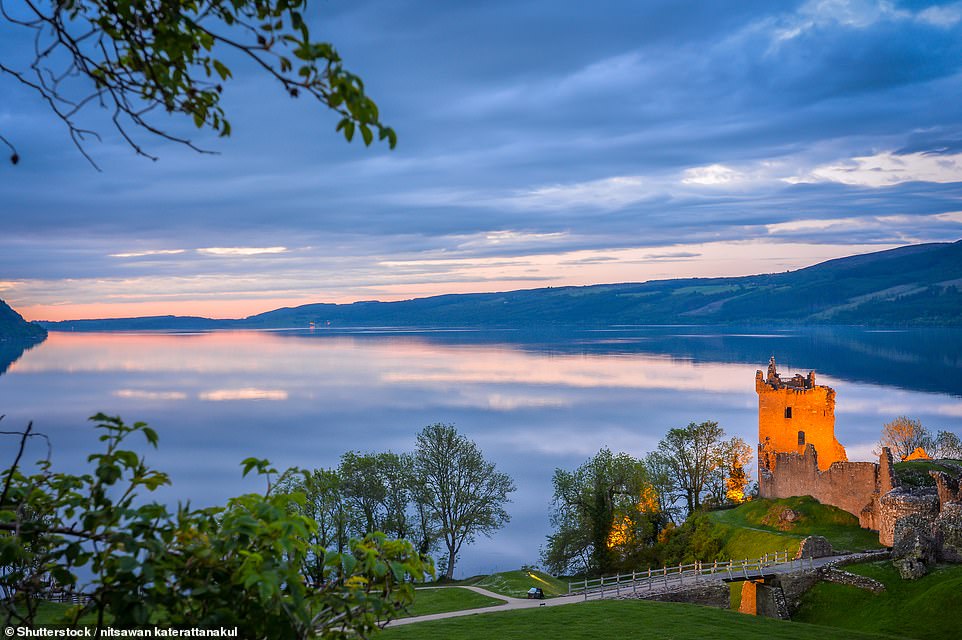 The Great Glen Way is another majestic route — from Fort William beneath Ben Nevis to Inverness. But it’s not as well-known as Wainwright’s Coast to Coast.

Again, this one suits fit and experienced hikers only. You may have to contend with midges, monsoon rain and even the occasional earthquake. The Great Glen is after all a massive geological fault.

But you can expect sublime cloudscapes and sunsets, sweeping views across Loch Ness and beyond, plus a feeling of wilderness all too rare in this country.

Take a hike: An eight-day, self-guided walk with accommodation from £870 pp (wildernessscotland.com). 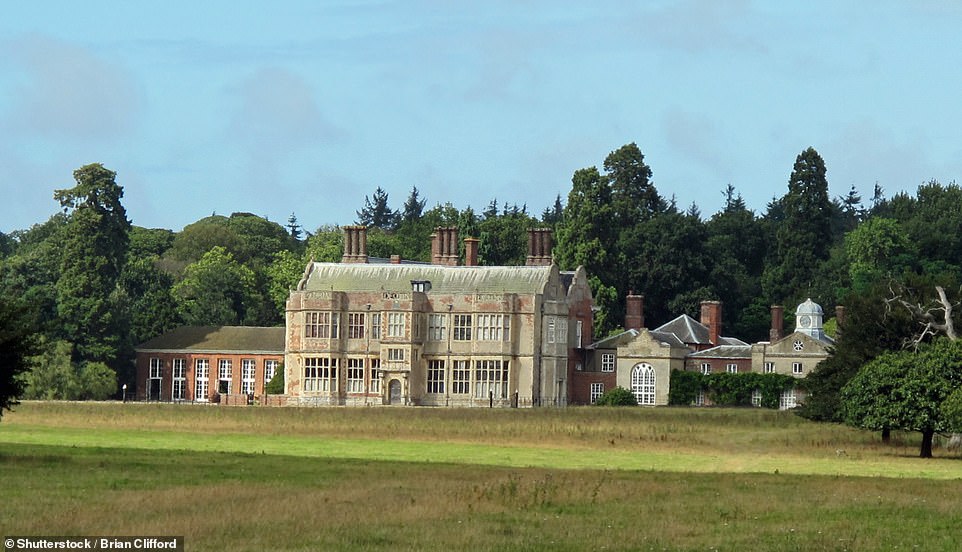 Don’t miss Felbrigg Hall, pictured above, when ambling along the Weavers Way – one of Britain’s lesser-known long-distance trails

One of Britain’s lesser-known long-distance trails running from Cromer to Great Yarmouth, the Weavers Way covers 61 miles through a quintessential Norfolk landscape of windmills, reed beds and slow tidal rivers.

Also, don’t miss Felbrigg Hall, once home to William ‘Mad’ Windham, a country gentleman given to displays of public nudity while ‘screeching like a demented imp’. Why bother queuing for Snowdon when you can have the peacefulness of our eastern flatlands?

Take a hike: From £500 pp with five nights’ accommodation (norfolkwalkingholidays.com).

Take me to the river 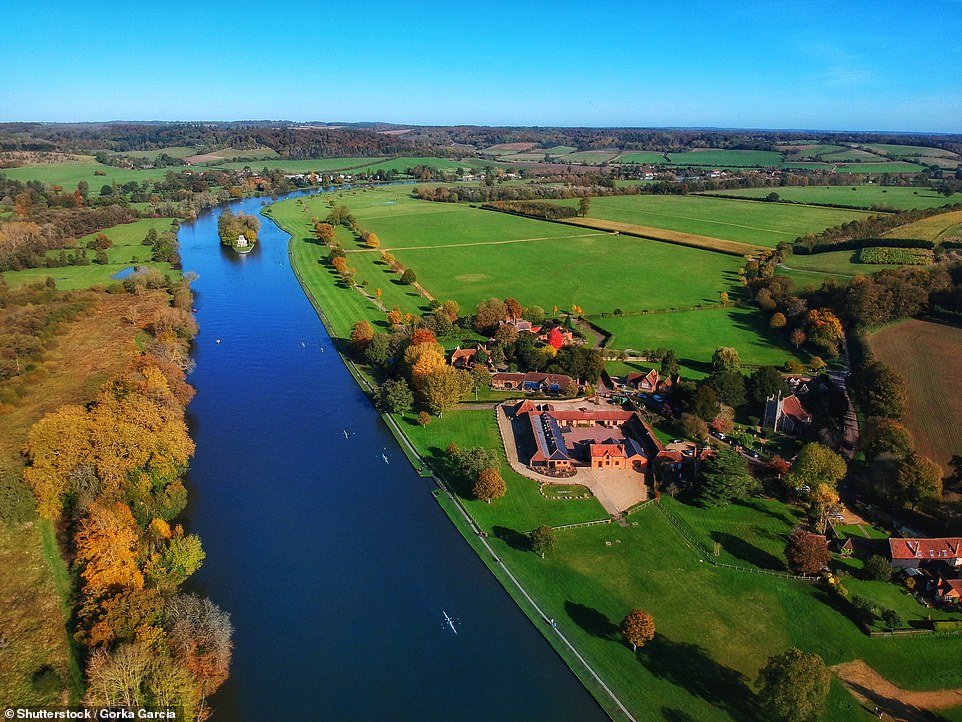 The view of the Thames in Henley, one of the stops along the excellent new Thames Valley Path route

Keeping close to England’s most celebrated river, follow the Thames through the heart of our country, history, ancient cities and much great architectural beauty.

From Oxford down to Windsor, it feels something like a royal progress, accompanied by herons, kingfishers and water voles.

Take a hike: Eight days from £1,349 pp with accommodation (headwater.com). 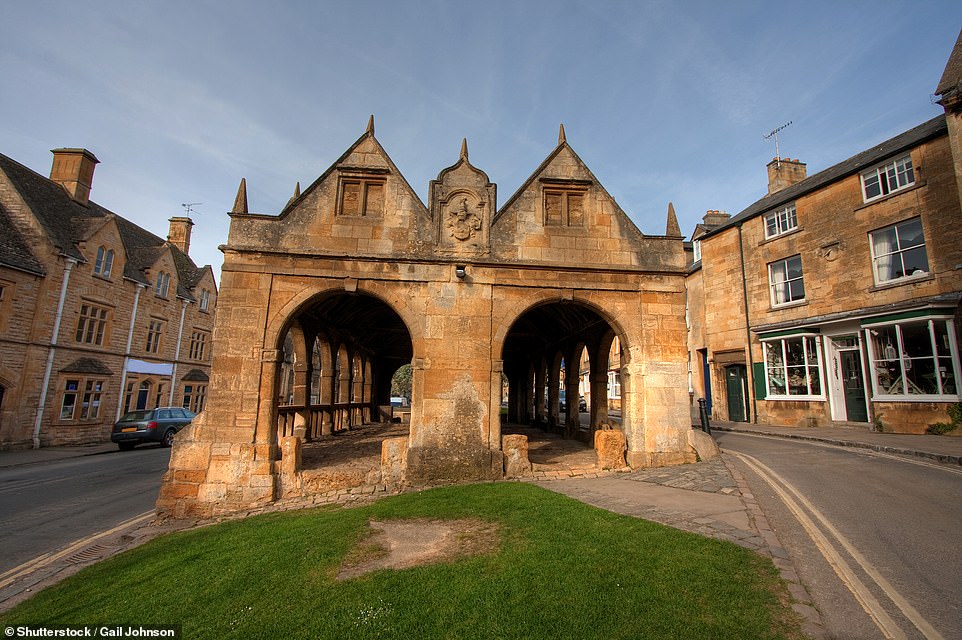 Spend the night in ‘achingly pretty’ Chipping Camden, pictured above. Doubles at the elegant Cotswold House Hotel cost from £175pp for two nights 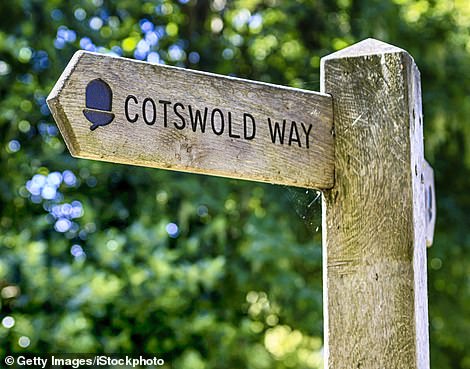 If you prefer to stay in one place, try Great Little Breaks, which offers good value inns and hotels across the country, from Scotland to the Isle of Wight.

My pick would be a spa hotel in achingly pretty Chipping Camden, with villages and countryside to explore.

Take a hike: Doubles at the elegant Cotswold House Hotel from £175pp for two nights (greatlittlebreaks.com).

Explore the Isles of Scilly on a ‘Guided Island Hopping’ tour arranged by HF Holidays, giving 32 miles of gentle rambling over five days, and little ascent.

Visit the Bronze Age burial chamber of Bant’s Carn, and the remote island of Bryher, which has a population of about 100 people. 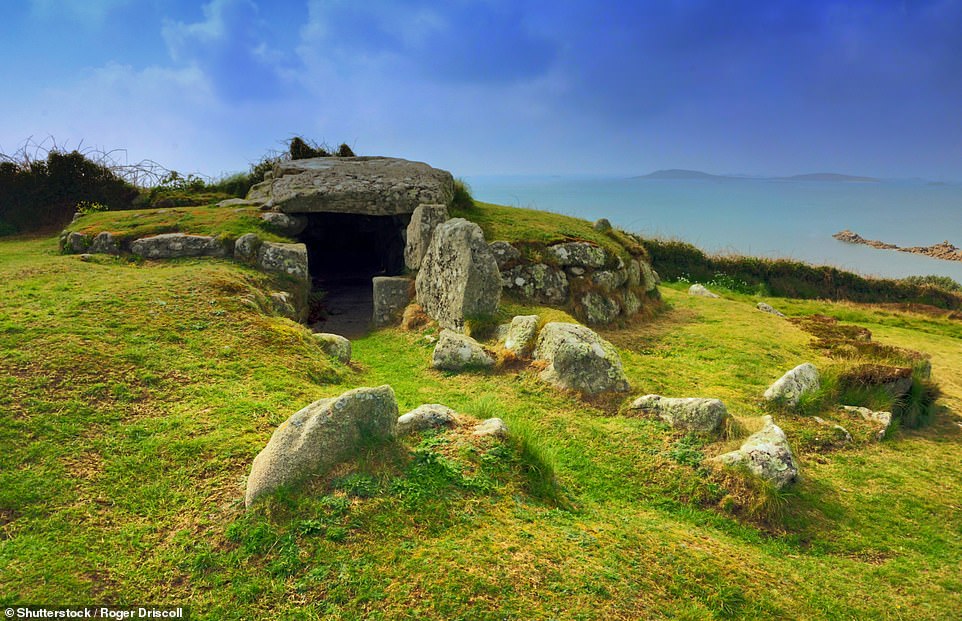 It is said that a traffic jam here is when two tractors meet. You’ll stay at the Bell Hotel on St Mary’s Island, and then sail out each day to a different island with a guide.

Take a hike: Six nights from £999 pp staying at the Bell Hotel (hfholidays.co.uk). 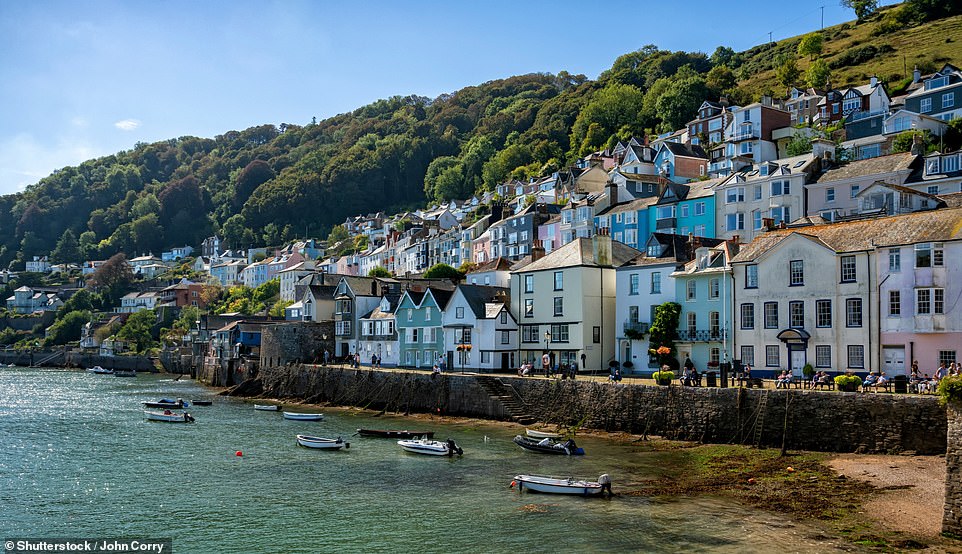 Stay at a coastal hotel in Dartmouth, pictured above, and plan your own Devonshire walking holiday

With thousands of miles of British coastline — nobody can quite agree how many, but there’s about 11,000 — one of the prettiest stretches, and often the most reliably sunny, is South Devon.

Stay at a coastal hotel and plan your own walking holiday, either along Devon’s portion of the spectacular South West Coast Path or around the river valleys fringing the southern edge of Dartmoor. A hotel with a view across lovely Dartmouth and the Dart estuary would be a personal favourite.

Take a hike: See bespokehotels.com/hotels/coast-country-collection for a great selection of hotels. 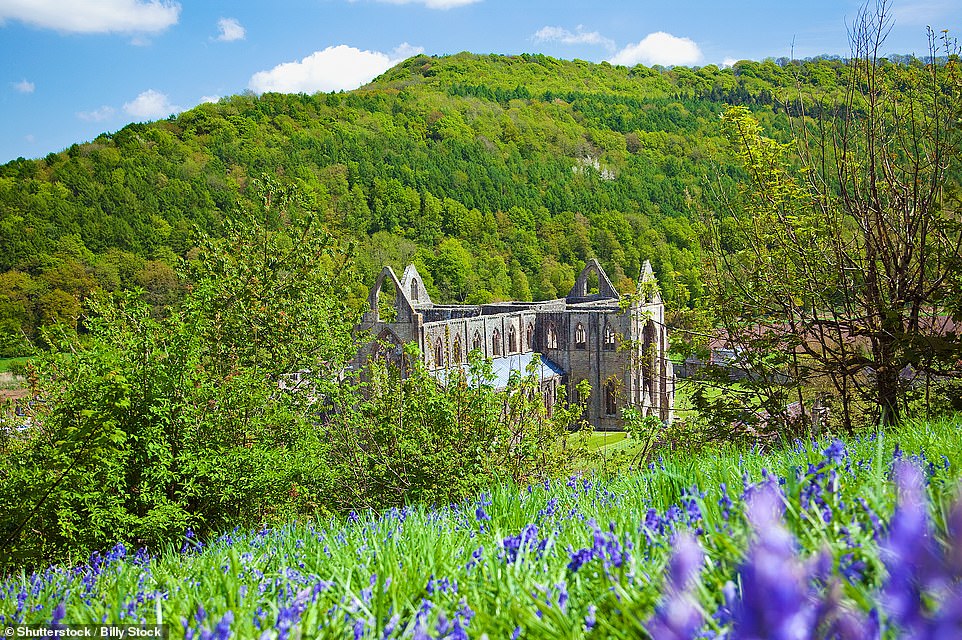 Offa’s Dyke is another classic long-distance walk for hardier types, named after the Anglo-Saxon King Offa of the Mercians, who had this huge earthwork built in the 8th century, passing through the tranquil Welsh Borders.

My pick would be the southern section, taking in the Black Mountains, famous ‘book town’ Hay-on-Wye, the lovely River Wye and Tintern Abbey.

You end up at Chepstow Castle, the oldest Norman castle in Britain. 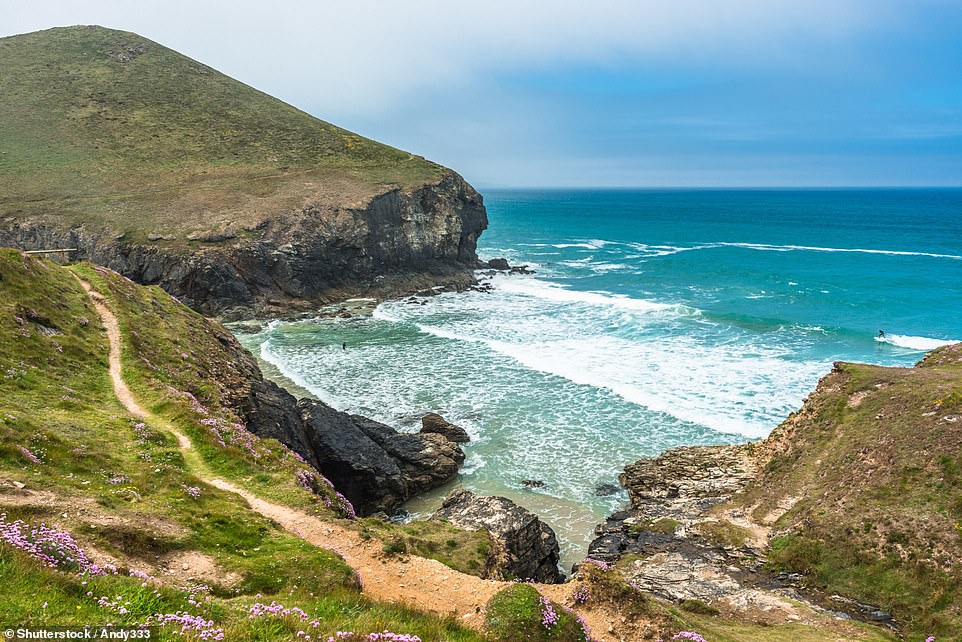 The 630-mile-long South West Coast Path goes from Minehead right round to Poole. Pictured is part of the route at Chapel Porth along the Cornish coast

We can’t leave off a route often voted one of the top-ten greatest walking trails in the world: our very own and ever-popular South West Coast Path, all 630 miles of it, from Minehead right round to Poole via Somerset, Devon, Cornwall and Dorset.

It is famously said that walking the whole way is the equivalent to climbing Mount Everest from sea level three times over — all those swooping ups and downs. But unlike Everest, here you can fuel up on cream teas.

TIPS FOR A TOP TOUR