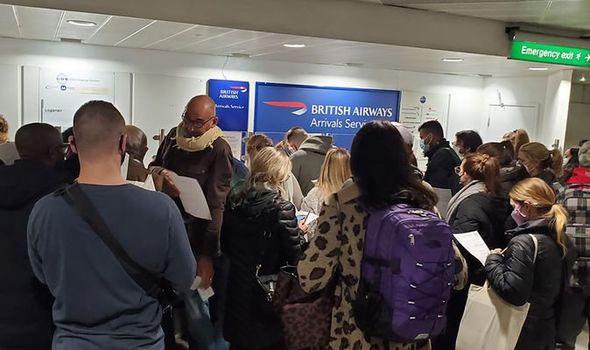 Jamie Skorczewski and his family spent Christmas without clothes, presents or medication after their suitcases, along with those of approximately 200 other passengers, vanished. They waited nearly two hours by an empty carousel at Manchester Airport until a BA employee came to hand out forms for them to report their baggage as missing.

Jamie, his partner and son had travelled from San Diego, California, to Manchester via London Heathrow on December 21 for a long-awaited festive family reunion.

But Jamie says he was unable to give his family, including his child, any Christmas presents as he was left waiting six days for his luggage to be returned.

When his family were finally reunited with their bags Jamie claims all the gifts were unwrapped, two bottles of wine stolen and one suitcase totally destroyed.

Speaking to Manchester Evening News, Jamie said: “My son was left very disappointed on Christmas day. Like every little boy at Christmas Day he wrote a list.

“We, his parents, were the only members of the family to buy him items on his list and they were all in our suitcases.

“So Christmas day was not the best for him and the magic of Christmas finally ruined as we had to explain everything to him.

“We had no clothes except for those we had travelled in for that period of time and eventually had to buy some.

“Then all the gifts had also been unwrapped and two bottles of wine had been stolen.

“One of our suitcases was totally destroyed – I don’t know if BA will cover that.”

The dad says the fiasco was complicated by the involvement of four companies in tracking their bags.

BA had contracted Global Baggage Solutions to fly the bags from Heathrow to Manchester, but despite many calls and messages, Jamie claims they failed to get back to the family.

Jamie travelled back to the airport on December 22 and found the only way to contact Global was through a customer telephone at the information desk in Terminal One.

During that call, Jamie says he was informed they didn’t have the bags – but then found out 30 minutes later from BA that they did.

Despite this breakthrough, the firm then held on to them for two days before passing them on to another contractor. Jamie was then claims he was told they would be delivered to his address but they didn’t arrive.

So Jamie returned to the airport on Christmas Eve and tried the terminal phone again.

Passed on to the new firm, he managed to get through after repeated calls.

Jamie added: “I begged them to let me come and collect my baggage. I was informed that it was not possible as they had closed.

On December 27, the third-party firm contracted a courier firm to deliver the luggage – but there was no way to contact them to arrange a time more suitable than 3.30pm so Jamie had to leave his father’s 80th birthday event to wait for the luggage at home.

He added: “I had called to see if there was anything they could do but was told really coldly that they would be returned to the depot again if I wasn’t there and I’d have to wait for another slot.

“What’s annoyed me the most in all of this is the lies, misinformation and the lack of available information or anyone to contact.

“It also ruined our Christmas, especially for our son, and interrupted my fathers 80th birthday event.

“We paid so much money for our tickets as well, around $3200 (£2,300) for myself and my son, only to end up squashed shoulder to shoulder in a packed economy section.

“We were literally wedged in. So much for social distancing.”

Other passengers, including 38-year-old Craig Cuthbert, his wife Lucy, 35, and their toddler Paxton, two, have still not been reunited with their suitcases.

Each airline appoints its own baggage handler and Manchester Airport have said it is not involved in luggage logistics.

As background, BA has said customers can be reimbursed for the cost of essential items when they were without their baggage and claim for any damaged or missing contents.

A spokesman said: “We apologise unreservedly to customers who had their baggage delayed over the Christmas period after arriving in Manchester.

“It’s clear that our service and communications fell short on this occasion and we’re taking the necessary steps with our third party handlers and couriers to ensure we avoid a similar situation in future.”