Super Nova Scotia: A 1,000-mile road trip through Canada’s great outdoors offers an abundance of wildlife – and the best lobster in the world

Perched on buoys, cormorants are hanging out their wings to dry after an early breakfast. They are an arresting sight, but it has always been a mystery to me why God would create a diving bird with wings that aren’t waterproof.

Though it does make for a bizarrely entertaining spectacle.

This is Baddeck Harbour on Nova Scotia’s Bras d’Or Lake in the Canadian Maritimes, where there is a weathered lighthouse in the foreground; small, sleek yachts motionless on the dead calm water; trees dressed in their autumn finery of red and gold.

Dawn has just broken and I’m sitting on a bench watching the nascent sun clear a light shroud of overnight mist from the blue-black water. 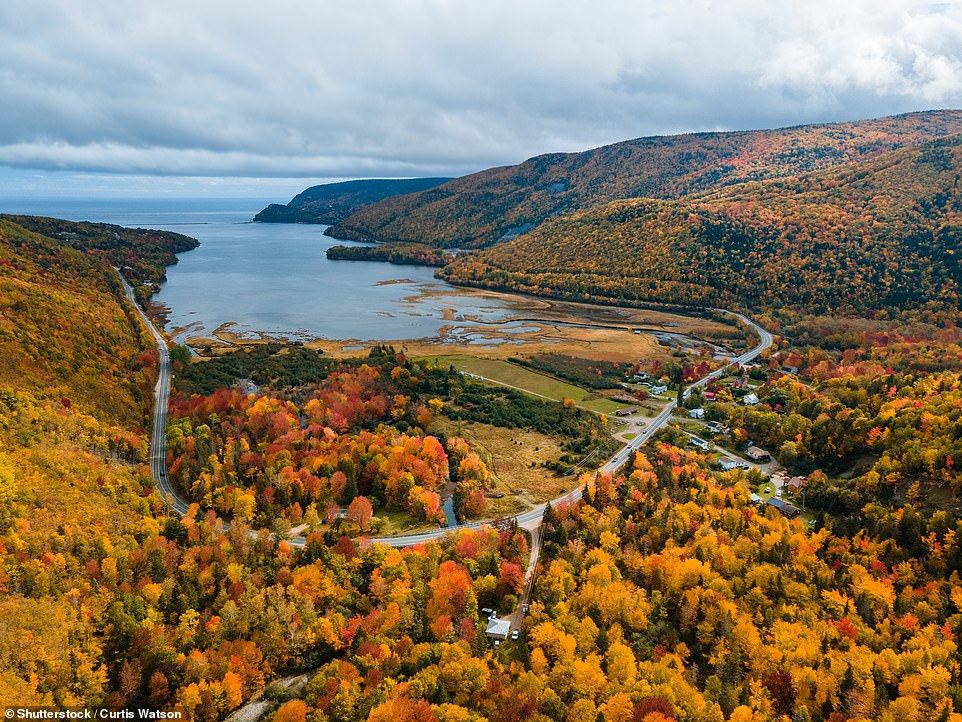 Pure: Neil Darbyshire embarks on a 1,000-mile road trip around Nova Scotia, stopping off along the way to spot bald eagles flying overhead in Ingonish Harbour (above)

Everyone has their cherished travel memories — places or experiences that somehow touch what W.B. Yeats called ‘the deep heart’s core’. For me, this is right up there. A couple of hours later, things are considerably less dreamy. I’m on that same water in a canoe — and it is not a pretty sight.

The preliminary conversation with Michelle, my impossibly healthy instructor at the Inverary Resort, goes like this.

Michelle: ‘Have you canoed before?’

Me: ‘Yes, I once spent a week paddling down a river in Provence.’

Her: ‘Great. When was that? 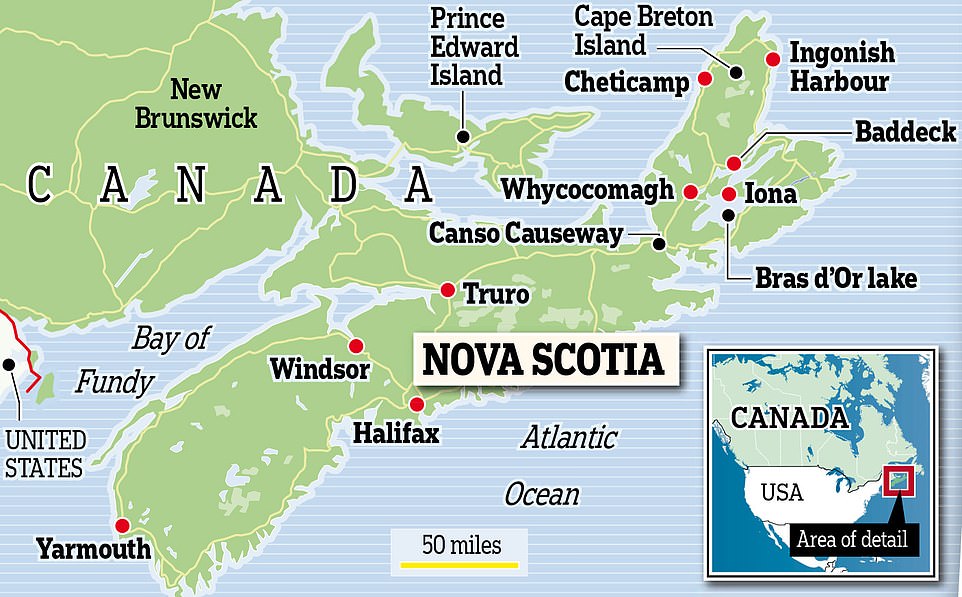 Neil sets out for the wild country ‘in search of bald eagles, moose and a cultural education’

Her: ‘We do have a couple of tandem kayaks. Shall we go together?’

I clamber into the back with all the elegance of a John Sergeant paso doble and we’re away. Once in motion, the years slip away. I couldn’t steer the thing straight in 1972 — and still can’t. Fortunately, Michelle can and we spend the next couple of hours on a stately tour of the harbour.

The Bras d’Or (Arms of Gold) is a vast sea loch on Cape Breton Island on the eastern end of Nova Scotia. To the north are Quebec and Newfoundland, to the west New Brunswick. Due east of Baddeck, there is nothing but the Atlantic until Europe.

This lake, 20 times the size of Loch Ness, has a seminal place in Nova Scotian history. In the 18th century, Donald Og MacNeil, a soldier in King George II’s army, was so captivated by its beauty that he went home to the Hebridean island of Barra to encourage his kinfolk to make a new home there. 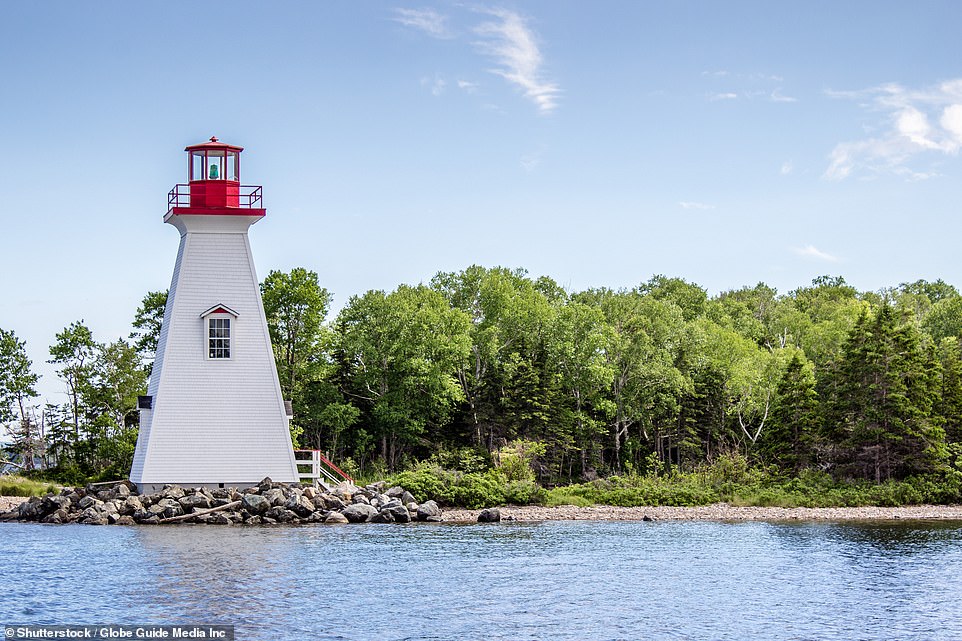 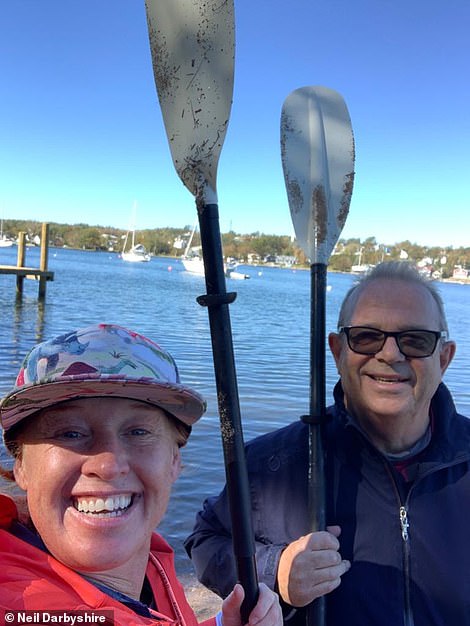 Donald himself died in battle soon afterwards but, years later, two of his sons and their families began what would become the mass emigration from the Western Isles and Scottish Highlands to Cape Breton.

Thousands fled the poverty and repression that followed the Jacobite rebellion and the Clearances. The place names here tell their own story — Iona, Boisdale, Inverness, Glencoe. A New Jerusalem in New Scotland. My week-long, 1,000-mile road trip had begun two days earlier in the capital, Halifax, and a hotel halfway between the bustling harbour and the city’s great Citadel, built in 1749 as a bulwark against the French.

James Waller, a Citadel guide, informs me that Halifax is the second largest non-freezing harbour in the world, after Sydney. He is dressed in the uniform of a 19th-century Royal Engineers sergeant. ‘Are you in the military?’ I ask. ‘No’, I’m in IT,’ he replies.

For dinner, I decide on the Five Fishermen, a restaurant serving delicious lobster, with an intriguing back story. The building is 200 years old and reputedly haunted. Originally a school, one of its principals was Anna Leonowens, governess to the King of Siam’s children and inspiration for the musical The King And I.

It was later the funeral parlour where bodies of some of Titanic’s wealthier victims were brought after it sank 370 nautical miles to the south-east. Eerie contemporary pictures show coffins in the street outside. Philip, a local art student and part-time barman at the Five Fishermen, admits having had a few slightly unnerving experiences but tries to be insouciant. ‘You sometimes hear strange noises and knocking sounds at night,’ he says. ‘But I don’t really think there’s anything to it.’ 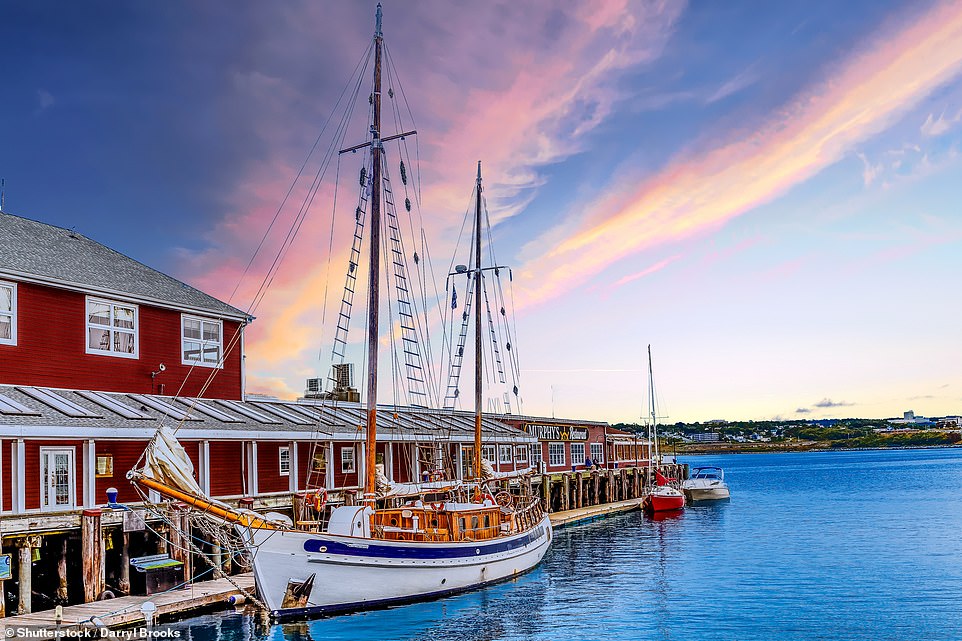 Halifax, Nova Scotia’s capital, is where Neil’s voyage begins and ends. He stays in a hotel halfway between the bustling harbour (above) and the city’s Citadel 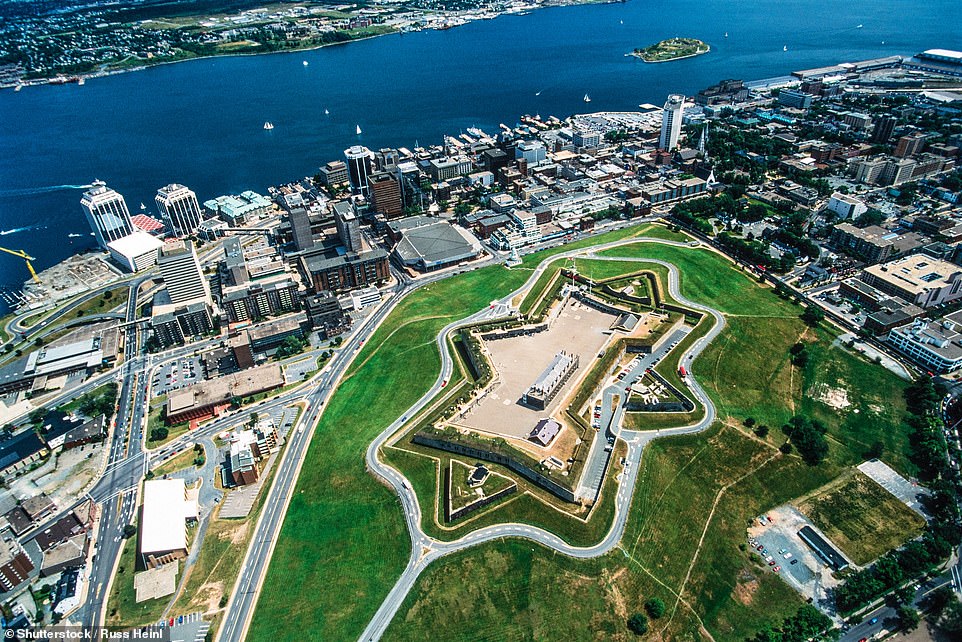 Neil goes on a guided tour of Halifax’s great Citadel (pictured centre), built in 1749 as a bulwark against the French 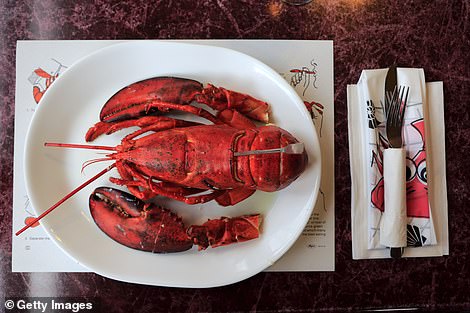 ‘Nova Scotia is renowned for its shellfish,’ says Neil. Above is fresh Atlantic lobster (file photo)

There is an unmistakable note of uncertainty in his voice. I want to say that whenever he feels afraid, he should whistle a happy tune, but fear The King And I gag would be lost on one so young.

Next day, it’s time to set out for the wild country in search of bald eagles, moose and a cultural education. I’m not used to travelling alone — my wife Isabel had been due to come but when I mentioned the word ‘hike’, she suddenly remembered a prior engagement. However, I’m looking forward to some quiet contemplation.

The weather here in mid-October is surprisingly mild. But then I hadn’t realised Halifax was quite so far south, being on the same latitude as Bordeaux.

The first leg of the drive to Baddeck, while pleasant, is a little one-dimensional — pine trees as far as the eye can see.

But cross the Canso Causeway on to Cape Breton Island itself and everything changes.

The road climbs into rugged hill country, looking down on dramatic coastline and pretty harbour villages. There are distinct echoes of the Scottish Highlands, with many signs in Gaelic as well as English.

Nova Scotia is renowned for its shellfish, and on the roadside an intriguing sign advertises a Lobster Interpretive Centre. An improvisational drama group, perhaps? Sadly, it’s closed.

Later, in the village of Whycocomagh, I pass a shack selling ‘seven different strains of cannabis’ — permitted under Canada’s liberal drug laws. Naturally, I hold my breath as I drive past so as not to inhale. 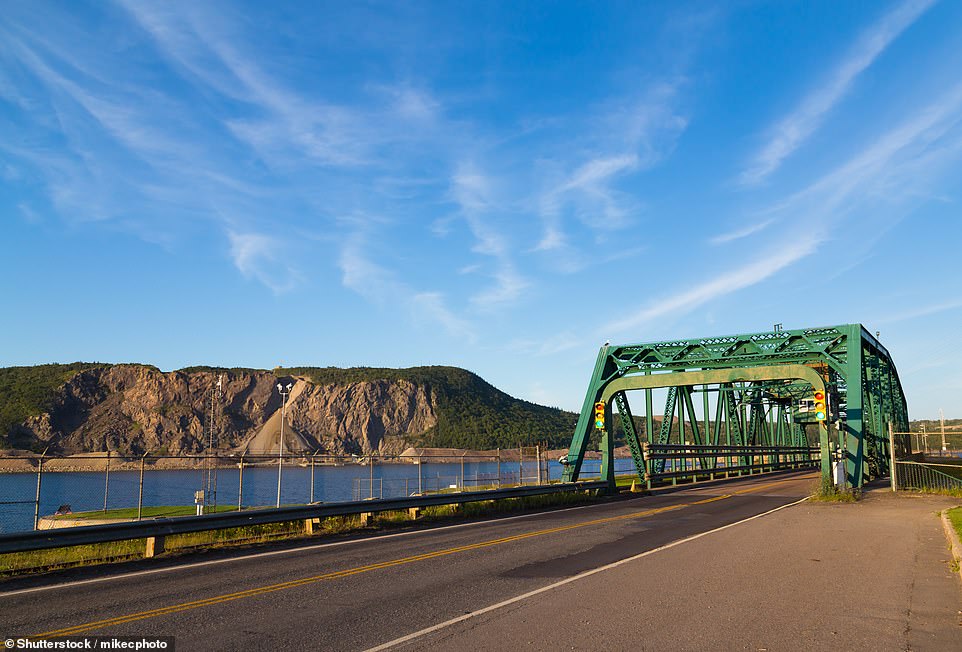 Once you cross the Canso Causeway (above) on to Cape Breton Island the landscape changes completely, Neil reveals

From Baddeck, it’s on to Ingonish Harbour. Base camp for the Cabot Trail through the Highlands National Park, the town is set around a gorgeous horseshoe bay. Hiking around the shoreline, I have my first brush with a bald eagle. Coming out of the forest, it glides past about 10 ft above me.

A truly thrilling sight with its brilliant white head and huge wingspan, it gives me a malevolent sideways glance before wheeling off into the forest. There are around 800 resident bald eagles in Nova Scotia, mostly in Cape Breton. You would be unlucky not to see one.

There’s no doubt the name of Doucette is big in these parts. At Doucette market, next to the Doucette eatery, near Doucette’s garage on Doucette Street, I meet Ken Doucette. Like everyone here, he is engaging, warm and helpful.

Ken is descended from French Acadians, among the earliest European colonists here. From the early 1600s, Nova Scotia changed hands several times between England and France until the French were finally routed in the 1750s. 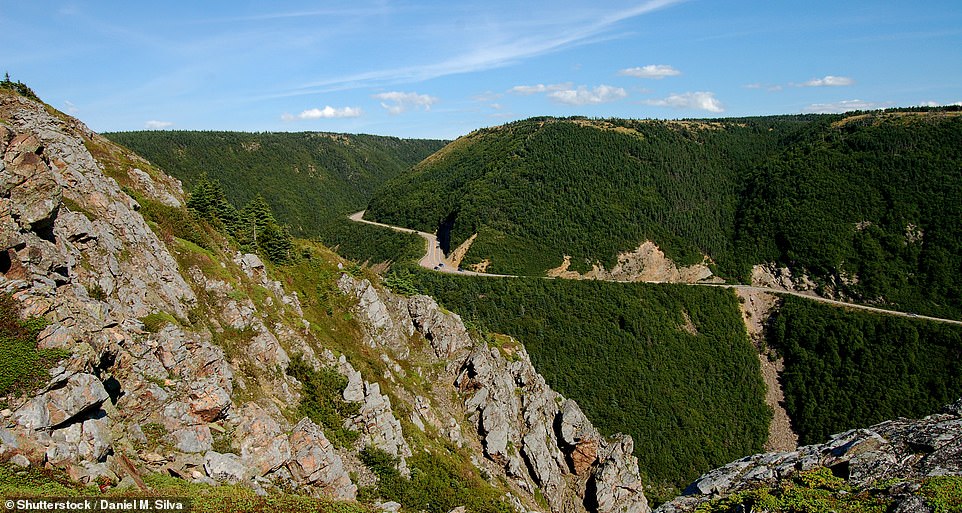 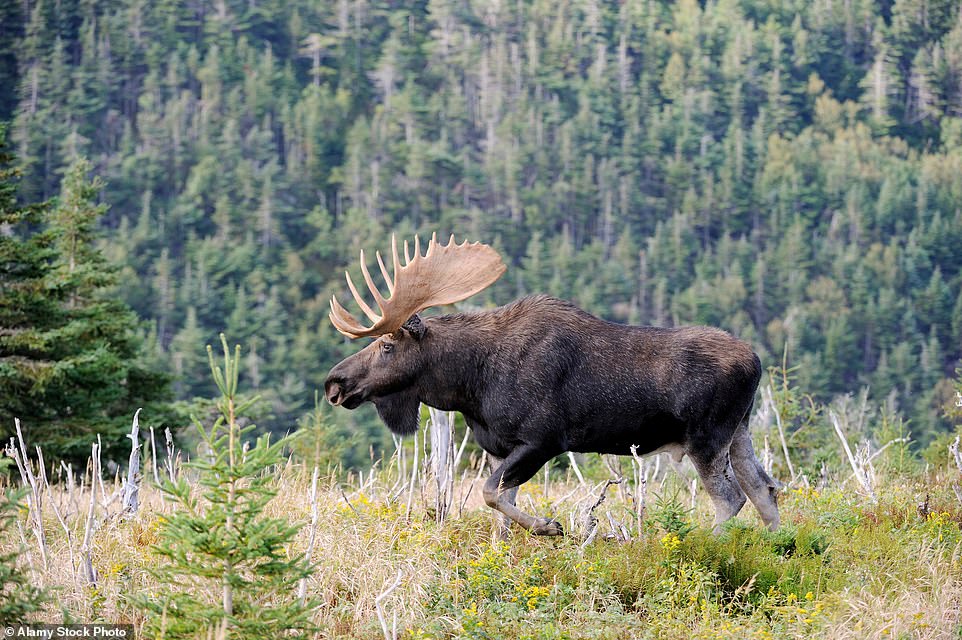 Neil says that it’s a ‘thrill’ to spot moose during his travels. Pictured above is a stock image of a moose in Nova Scotia’s Cape Breton Highlands National Park

Ken explains that his forebears, along with the native Mi’kmaq people, were among thousands expelled from Cape Breton by the English to make way for British settlers. Some went to Louisiana (then a French colony), where they became the Cajuns. Others stayed around the Maritimes, or hid in the wilds of Cape Breton and New Brunswick until the expulsions ended in 1764. BBC international correspondent Lyse Doucet is from the family’s New Brunswick branch.

I apologise to Ken for the sins of my fathers, but he is remarkably forgiving.

Next stop is Cheticamp, the largest Acadian village in North America. On the way there are several excellent sites for watching whales and dolphins. Sadly, Hurricane Fiona seems to have frightened them off, so I decide to head up to moose country. 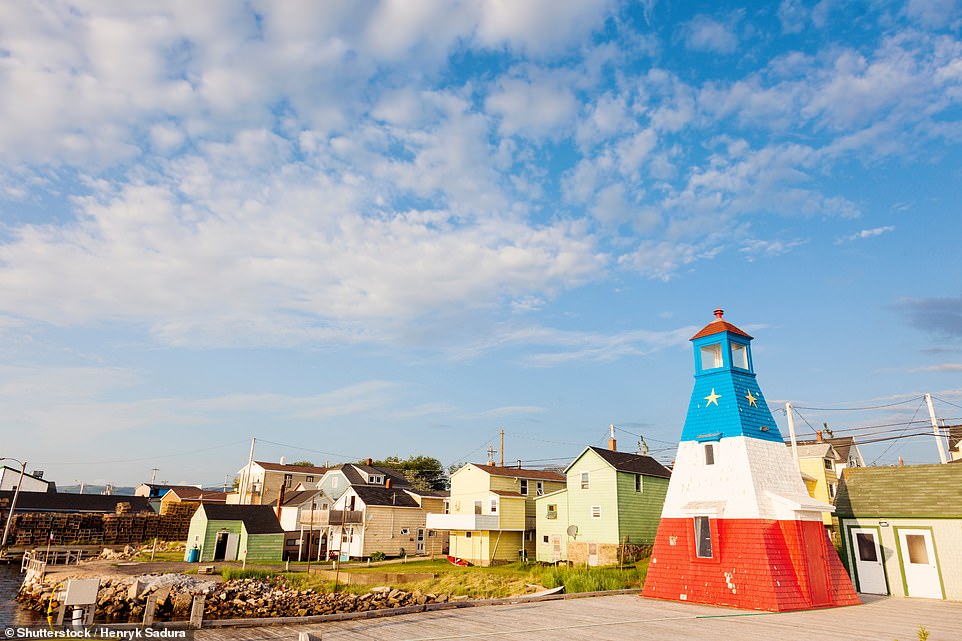 Air Canada flies direct from London Heathrow to Halifax, from around £520 return. Hotels in Cape Breton range between £100-£200 B&B per night.

On French Mountain at the head of the Skyline Trail, I see three on the forest edge — Dad with the crazy antlers, Mum and calf. Baby is curious and hangs around long enough for a picture. Another thrill.

Cheticamp is on what is known as the Ceilidh Trail. Here, Acadian, Scots and Irish cultures mix in a heady brew. There is live music in almost every bar.

It also happens to be the start of the annual Celtic Colours International Festival of song, dance, artisan crafts — and, of course, drinking. I’m staying the night at a distillery. What could possibly go wrong?

I’m variously invited to try rug-weaving, square dancing (sorry, just no!), and a ship harbour song session. I settle for listening to a hardcore fiddle band over dinner — a surge of Celtic adrenaline — and a glass or two of very acceptable single malt.

Crossing the Canso Causeway next morning, on the way back to Halifax, brings unexpected sadness. I’ve only been here a few days but feel like an honorary Cape Bretoner. I’ve loved its raw grandeur, wildness and the kind straightforwardness of its people. It is firmly embedded in the travel bag of memories, to be pulled out from time to time for lifting the spirits on gloomy days.

As Alexander Graham Bell, inventor of the telephone and long-time Baddeck resident, said: ‘I have seen the Rockies, the Andes, the Alps and the Highlands of Scotland.

‘But for simple beauty, Cape Breton out-rivals them all.’