Welcome to Worthing… no, not the Sussex seaside town but a stretch of beach in Barbados that’s home to sea turtles, hearty food – and potent rum cocktails

When a region has its own slang word to describe its devotion to taking things easy, it’s a pretty good indication that holidays there will be super-relaxing. So why not indulge in a bit of ‘liming’ – the Caribbean art of simply hanging around. After all, it’s the promise of liming beside turquoise seas in the shade of a coconut palm that brings holidaymakers repeatedly back to these islands.

Of all the isles, none is more welcoming than Barbados to the post-pandemic British visitor. Indeed, the UK accounts for a third of this former colony’s visitors, with Virgin Atlantic alone operating up to 18 flights each week.

Until now, the big draw has been the genteel west coast, where platinum sands meet with blinding-blue shallows above which rise luxury hotels such as Sandy Lane, where overnight stays can set you back more than £1,000 a night. 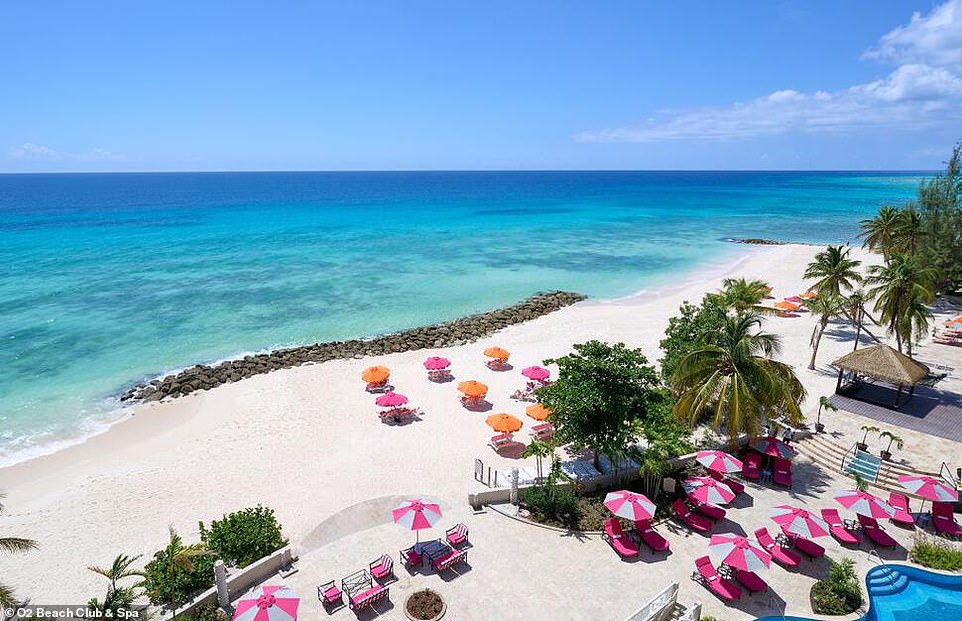 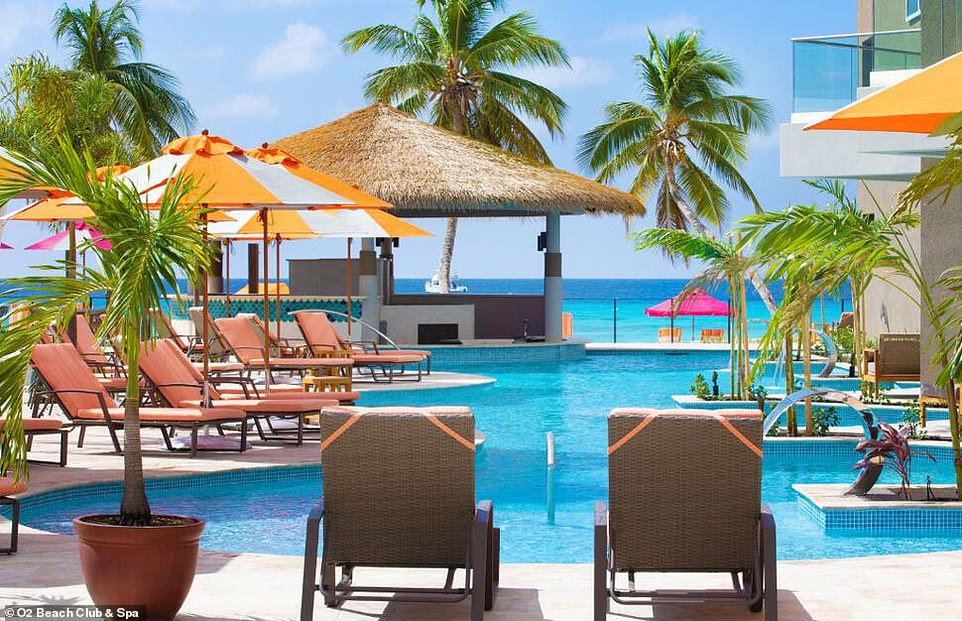 Yet all eyes are now on the livelier south coast, which has been quietly reinventing itself in recent years, winning acclaim for its beaches and the arrival of more affordable luxury.

That luxury comes in the shape of just-opened O2 Beach Club & Spa (o2beachclubbarbados.com). This former condominium resort on a swathe of beach has expanded, upgraded and emerged from the pandemic as a five-star boutique all-inclusive with four restaurants, a spa and extra rooms in an all-new beachfront tower.

It feels far more casual than at the west coast’s traditional luxury hotels. O2 Beach Club’s service is clearly five-star but more relaxed, with staff personalities shining through. There’s a great choice of restaurants, from themed buffets to fine dining, and the bars serve quality drinks including Bajan rum, rosé from Provence and Italian prosecco – all included in the price. 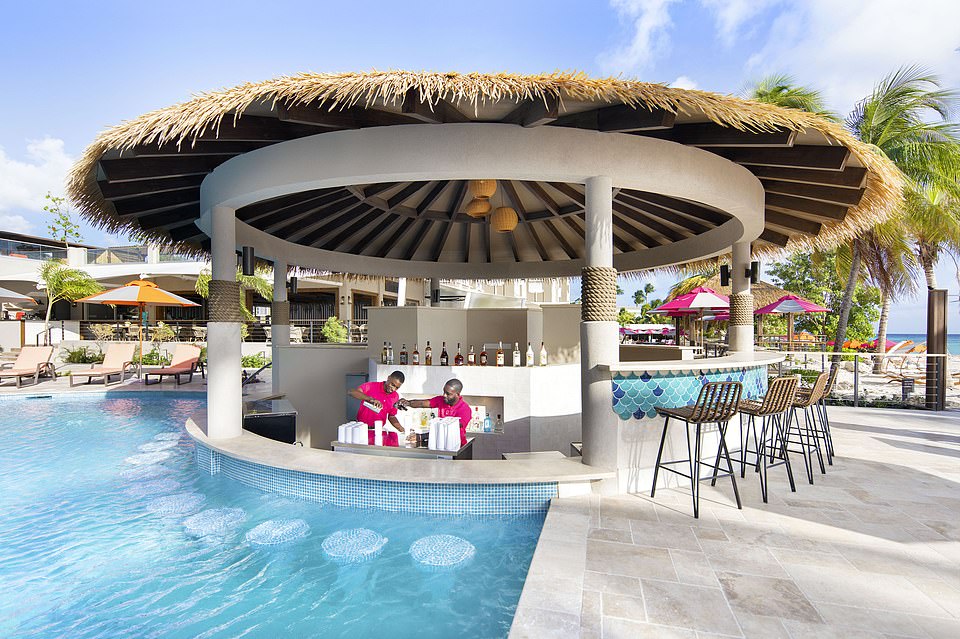 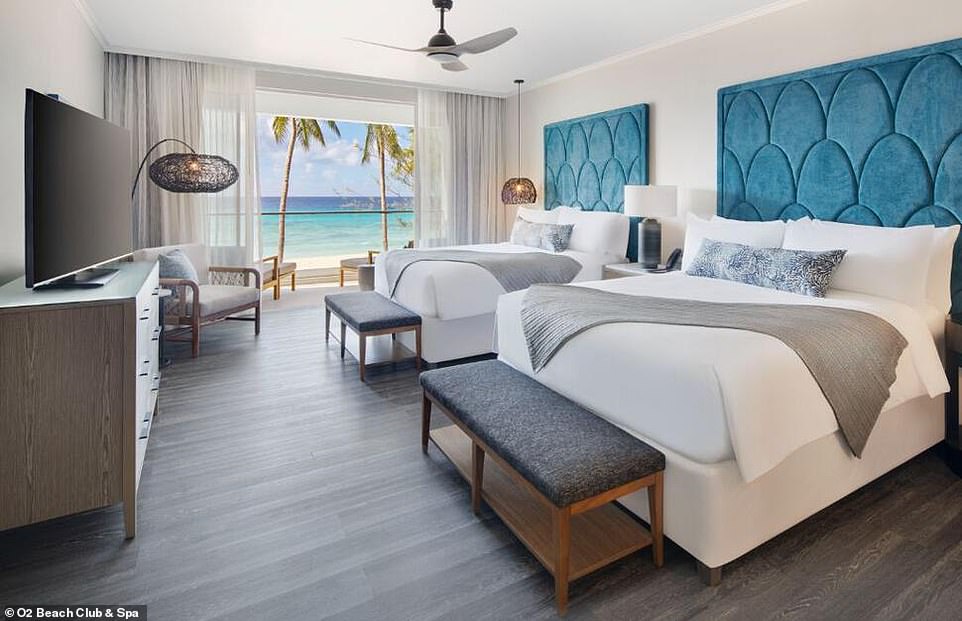 One of the rooms at the O2 Beach Club & Spa. ‘Days here can be spent poolside, watching hummingbirds flit between tropical blooms, or stretched out on the beach,’ says James

As for the rooms, my sea-facing suite in the adults-only wing was huge. Stylishly dressed in marble, pale wood, rattan and tactile fabrics, it had an oversized bathroom with walk-in shower and free-standing tub, and a generous balcony overlooking the beach below. Liming was easy in this private space, lulled by a gentle soundtrack of waves on the shore and the rustle of poolside palms complemented at dusk by a chorus of pings made by unseen, amorous frogs.

Days here can be spent poolside, watching hummingbirds flit between tropical blooms, or stretched out on the beach. The only downside is the swell: while the waves are fun to play in, they could intimidate less confident swimmers. More sheltered shores lie a two-minute walk away at Dover Beach, whose sweep of sand fronts a gentle bay of invitingly aquamarine waters.

Things get calmer still at Worthing, the next beach along beyond St Lawrence Gap’s restaurants, bars and stalls selling beach wraps, jewellery and bird-feeders crafted from coconut husks. Worthing’s white, palm-dotted sands are sheltered by an offshore reef, so the shallow water offers ideal swimming conditions. And it’s not just wave-wary beachgoers who appreciate these calm waters: this is also a fantastic place to snorkel, with plenty of green sea turtles. 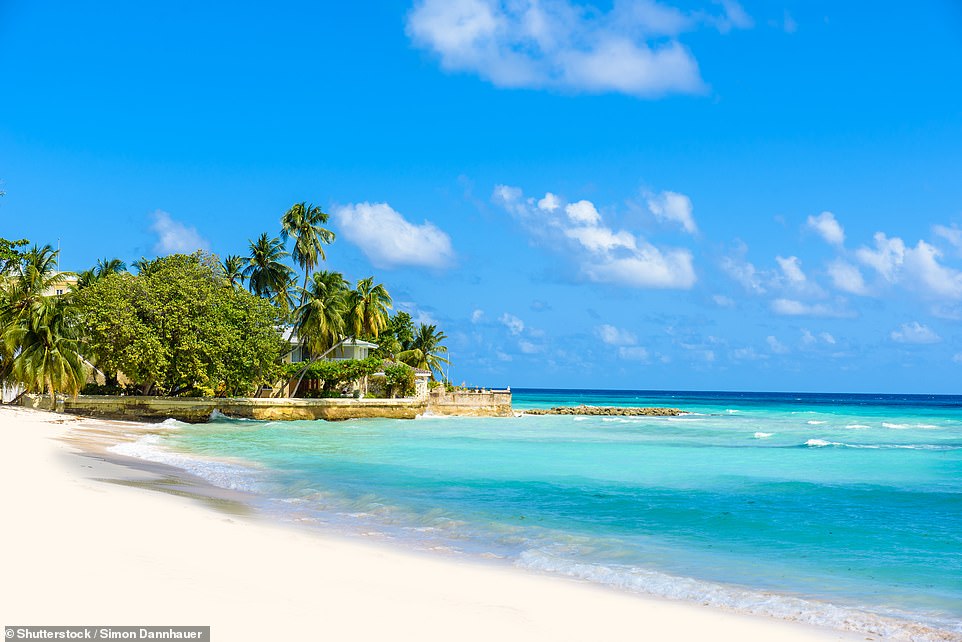 The sweep of sand at Dover Beach, pictured, fronts a gentle bay of ‘invitingly aquamarine waters’ 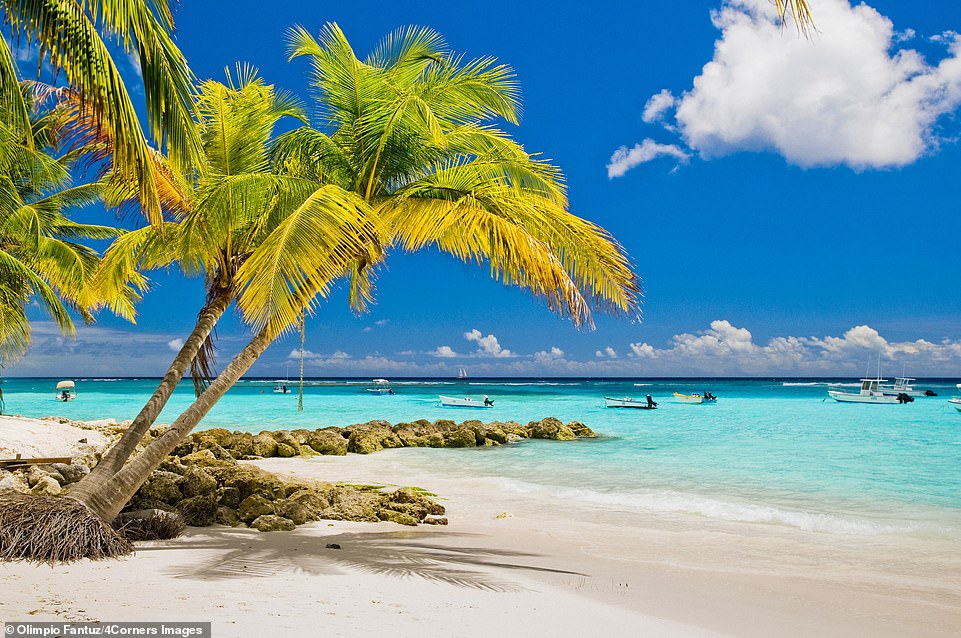 Above is Worthing Beach, where the shallow water offers ideal swimming conditions – and is also a fantastic place to snorkel 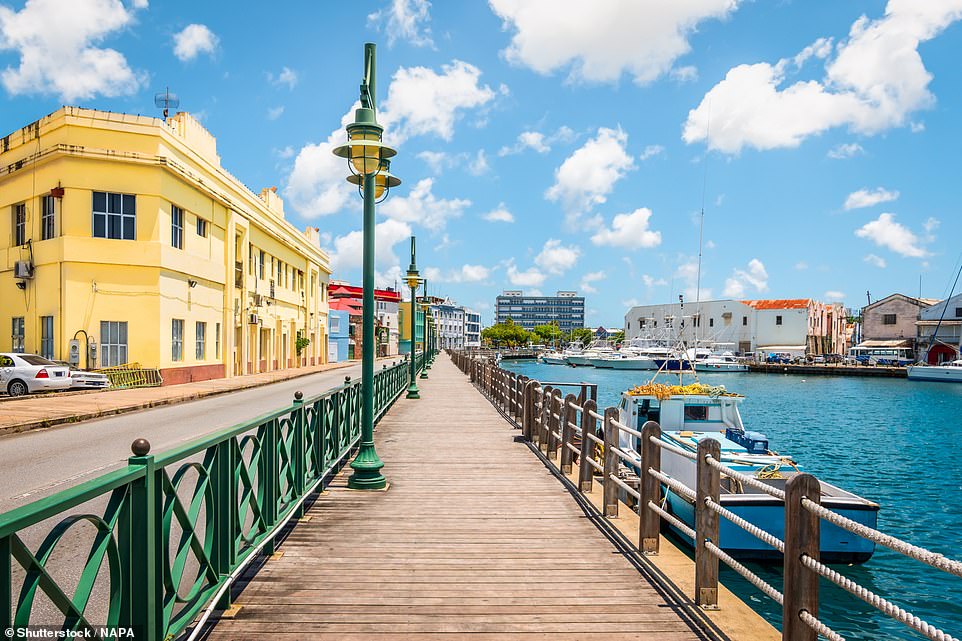 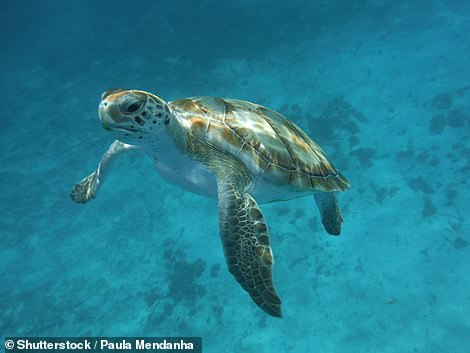 A turtle off the coast of Carlisle Bay. One surfaced close enough to James that he could ‘hear it exhale’

All that swimming and liming will leave you hungry, so head one street back from the beach to Worthing Square, where 20-odd food trucks spread out beneath trees. Locals come here to lime with friends and family. Among the delights are Bajan macaroni pie, Jamaican jerk and roti stuffed with curried goat, island-brewed beer and cocktails made with Mount Gay rum.

A reggae backdrop sets the tone on a half-day catamaran cruise with Cool Runnings (£74pp, coolrunnings barbados.com), which sails from Bridgetown to nearby Carlisle Bay Marine Park.

Here we snorkelled over shipwrecks teeming with marine life, from clouds of sergeant major fish (so called for their vertical stripes) to angelfish and trumpet fish, all schooling in profusion. Turtles swam about below and surfaced to breathe, one close enough that I could hear it exhale. 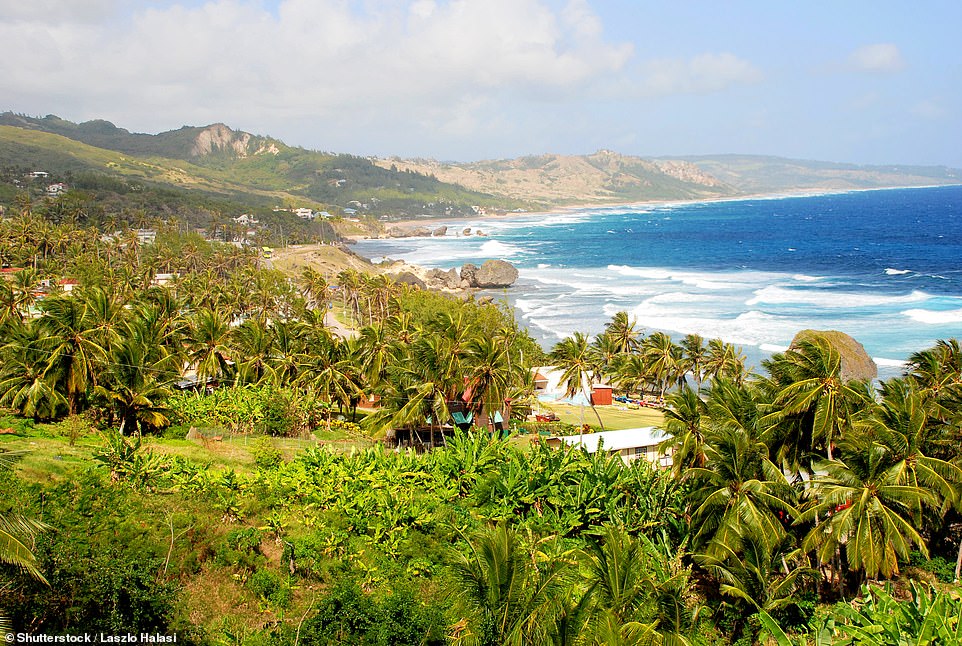 On a jeep tour of Barbados’s east coast, James stopped at the fishing village of Bathsheba (pictured) and watched the waves roll in from the Atlantic

Things got even wilder on a jeep tour to the less-developed east coast (£80pp islandsafari.bb).

We drove through coconut and banana plantations and passed bright-painted cottages and black-bellied sheep before stopping at Bathsheba, whose sandy strand is battered by waves rolling in from the Atlantic. From there, we followed the East Coast Road, pausing at one of the Caribbean’s last working windmills.

There may be lots more to experience in Barbados but it’ll have to wait until next time. After all, one shouldn’t pack too much in when there’s liming to be done…

Virgin Atlantic Holidays offers a seven-night all-inclusive stay at O2 Beach Club & Spa from £2,672pp, including flights and transfers (0344 557 3859, virginholidays.co.uk). Barbados requires all visitors to take a ‘Fit to Fly’ PCR test no more than three days before flying. Prices from £59pp from expresstest.co.uk.