ABOARD CARNIVAL MARDI GRAS — As cruise ships have grown gargantuan, one consequence has been a proliferation of dark, enclosed spaces in their interiors. The architects of Carnival Cruise Line’s latest and largest ship, Mardi Gras, have fought back with a radical new design.

Mardi Gras is the first ship with an atrium built into the side of the ship, rather than centered in the middle. The plan allows for a wide, three-deck window that floods the lower interior part of the ship with natural daylight.

It results, however, in an asymmetrical room that at first struck many at Carnival as an odd and needlessly difficult space to create. “There were doubts about it,” said Petu Kummala, Carnival’s design director for newbuilds and refurbishments. To say nothing of when Carnival took the idea to the shipyard in Finland where Mardi Gras would be built. “They were cursing in Finnish,” Kumalla joked. “Just for structural reasons, it’s really a challenge.”

But the massive size of the 6,000-passenger Mardi Gras, which is 35% bigger than Carnival’s largest prior ships, led executives to conclude that something like the off-kilter atrium needed to be considered. On the first revenue sailing of the Mardi Gras from Port Canaveral, Kummala and Glenn Aprile, Carnival’s director of newbuild product development, explained some of the thinking behind the design that will define Carnival’s next few ships.

Aprile said nobody wanted to take the layout common to Carnival’s past ships and just scale it up another 35%. That would funnel all of those passengers through a central atrium to get from one end of the ship to the other, a massive bottleneck. Moving the atrium to the starboard side allowed a circulation pass-through on the port side, easing traffic flow. 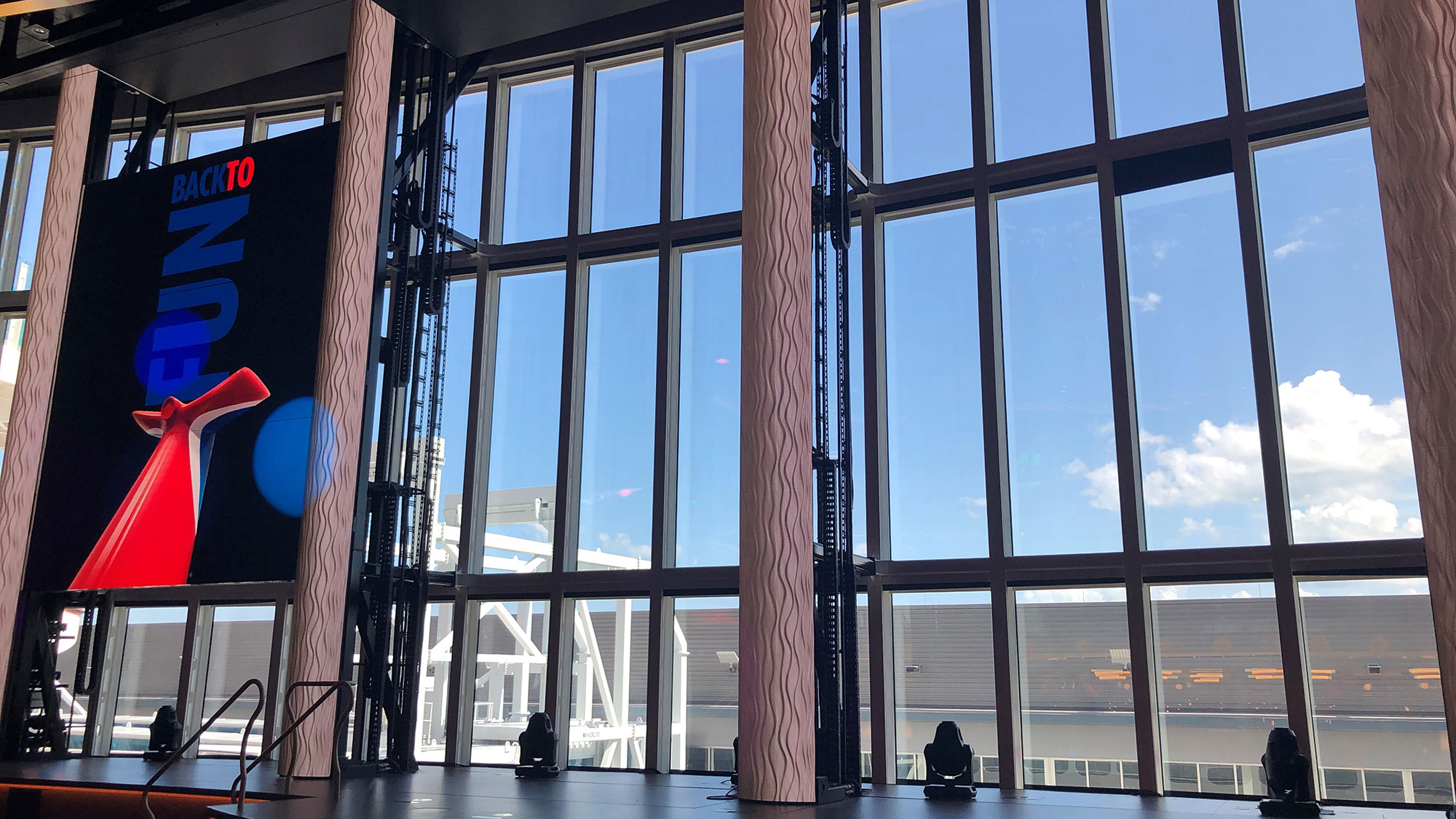 Designers had also concluded that the ship had outgrown having just one formally equipped theater. The atriums on cruise ships had already increasingly become informal entertainment venues as lines worked to “activate” spaces and keep the vibe going after production shows in the main theater concluded.

In the Mardi Gras’ Grand Central atrium, there are the lights, sound systems, rigging and seating of a formal theater. Enabling the transition are giant hi-res LED scenery panels, each 23 feet tall and 70 feet wide that swivel down on tracks to cover the windows when it’s showtime.

During the day, Grand Central is a one-size-fits-all gathering place. It’s where Carnival’s adaptation of the game show “Family Feud” takes place. During my first day on the ship, I saw the room being used for bingo games, impromptu dance classes and a trivia contest.

When nothing more formal is going on, passengers can lounge in the theater seats and have a coffee, eat a snack, read a book or take in the passing ocean view.

“Guests during the day now have the opportunity to feel connected to the sea without going outside,” Aprile said.