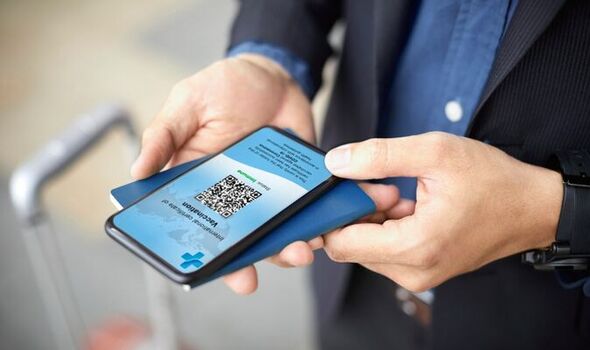 Firms have lost millions of bookings in the past two years, with many Britons put off trips abroad because of the unpredictable changes to government travel rules. Dozens of tourism chiefs have called for “complex and lengthy” locator forms (PLFs) to be scrapped, calling them the “last piece of the jigsaw puzzle” needed to be removed as the country returns to normality.

Under current guidelines, UK arrivals have to fill out a PLF, which must be completed 48 hours before arriving in the country.

Transport minister Grant Shapps is reported to be pushing to axe the paperwork by spring.

The Government has plans to “significantly simplify” the document as a temporary measure in the short term to boost customer confidence and support the struggling travel sector.

But moves to get rid of the forms have been slowed by objections from the Department of Health, which has been in favour of tougher curbs.

Seamus McCauley, of Holiday Extras, said: “If the Government can scrap so much of the domestic testing regime so quickly, why is travel being singled out again for this pointless delay?

“The proposed removal of passenger locator forms later this year is definitely welcome.

“However, with so many rule changes over the past two years we predict that holidaymakers will remain understandably confused and reluctant to book until all restrictions to travel are actually gone.”

He said his firm had lost 11 million bookings because of the pandemic, with more than three million of those being people put off travelling by the unpredictable changes to government travel rules.

Mr McCauley added: “People need unquestionable reassurance that they will no longer have to give up their holidays and the government needs to support the industry in our bid to make travel as hassle-free as possible.”

Earlier this month, the provision for fully vaccinated travellers to book a day-two test was scrapped.

Unvaccinated travellers must take a Covid test in the two days before their departure and book a PCR test to be taken two days after they arrive in the UK.

Experts have revealed customers have consistently rushed to lock in holidays when the Government has eased travel restrictions throughout the pandemic.

Brian Young, managing director at travel company G Adventures, said: “Ultimately, travellers want to book, pack, and go away without having to worry about filling in forms and submitting paperwork while away.

“In January, when the Government removed the requirement to PCR on return, we saw bookings rise as traveller confidence grew, resulting in the best sales month G Adventures had seen since the pandemic began.

“It’s clear that as restrictions are removed, travellers feel more motivated and confident to lock in those holidays to get away sooner rather than later, with over 40 per cent of our January bookings looking to travel before the end of April.”

Dubai, Malaga and Alicante top the list of holiday destinations booked by Britons since the start of February for travel this year, Skyscanner said.

Martin Nolan, the global traveller rights expert at Skyscanner, said: “Recent border reopenings around the globe and the loosening of protocols for UK arrivals have already gone a long way towards unlocking the pent-up demand we have seen over the last two years – we’ve already seen this convert into a rise in travel bookings over the coming months.

“Any further easing of restrictions or reduction in paperwork will be fantastic news for those already planning trips and will help to bring travel to the front of the minds of many who have been put off by the extra protocols.”

Although many travellers will take to the skies when restrictions ease further, Britons will continue to venture across the country on staycations.

Sykes Holiday Cottages discovered that 55 per cent of people will opt for a holiday in the UK even when all travel restrictions have been lifted.

A survey of 1,000 people found on average Britons are planning to take two staycations in the next year, with almost half (46 per cent) saying limiting their environmental impact is a key consideration.

Graham Donoghue, chief executive at Sykes, said: “Bookings for our holiday lets this year are through the roof, showing the staycation boom is here to stay.

“Brits are looking to make the most of what our beautiful country has to offer and the self-catered option still appears to be a popular choice.”

THE past two years of the pandemic have been incredibly tough for all of us and travel has been one of the worst affected industries.

For many months it was illegal to take an overseas holiday.

Even when these were possible, there were expensive tests and tough entry requirements for many destinations.

These, added to instructions to self-isolate on return to Britain, meant there were many barriers to travel.

However, the recent scrapping of all testing for fully vaccinated travellers returning home has made it much easier for customers to realise their dream of an overseas break. With popular holiday destinations also relaxing travel restrictions this month, people now have the confidence they need to book and to venture abroad again.

Many have not felt able to do so for more than two years. After such a difficult time, travel is needed more than ever, to recharge our batteries, spend quality time with loved ones and experience all that this amazing planet has to offer.

Now is a great time to start planning a trip abroad.

ABTA is seeing increasing numbers of people turning to travel professionals for extra peace of mind – in fact people with children under 16 say they are now 50 per cent more likely to do so.

Not only are travel agents and tour operators experts at finding the best destination for customers, they will also keep you up to date on any changes and get you a holiday at a competitive price.

The further relaxation of domestic Covid measures, announced by the Prime Minister yesterday, mean it is time to look again at the rules for international travel.

ABTA believes that all Covid restrictions introduced for international travel, including the Passenger Locator Form (PLF), should be removed unless they serve a clear public health objective.

Recent simplifications to the PLF are a step in the right direction, but the UK’s system for collecting passenger data is much more complex than that used by many countries. It’s time to take down the remaining barriers and to get people travelling again.