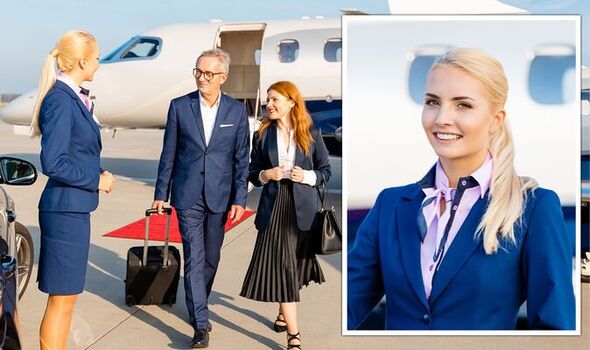 Flight attendant Arta shared with Express.co.uk her experience with the worst passenger and private jet owner she has ever met: a client with poor behaviour who was obsessed with cleanliness and order.

She explained: “Probably the worst experience I have to say is this one that comes to mind. If somebody would qualify as bad in my eyes that would be when somebody intentionally does something patronising.

“I used to fly for somebody who would require his plane to be kept immaculately clean, which we all tried to do.

“Pilots and I would sometimes almost crawl through the cabin from front to the aft looking for the smallest fallen hair on a carpet.

“But also that particular guest would hide small papers on the plane just to see if you find it, testing you if you had looked through the plane thoroughly enough.

“We had small Evian bottles throughout the cabin, the guest would open one and then close it and check next time if you have noticed. This would qualify as not nice behaviour in my eyes,” she explained.

In Arta’s experience, the “worst thing” about being a private flight attendant is that “you are replaceable at any given moment”.

This is more common when crew work for a private owner than for a charter company, which allows different people to rent the plane for the day.

“For example, I have personally been laid off because I am too young at the request of the wife of an owner of the plane,” the flight attendant revealed.

When someone owns a private jet, the owner can be the pilot flying the aircraft if they are qualified to do so.

Alternatively, they can hire a full-time crew consisting of two pilots and at least a flight attendant but this can be expensive as they are on call 24 hours a day.

Therefore, the owner of the plane can fire pilots or flight attendants as they please, and with little notice.

Arta also shared some weird requests from rich people on the private plane: “A colleague of mine once flew with an A-list celebrity whose request was not to make eye contact.

“I would find that awkwardly weird as what is the first thing you want to do once told this? Probably look in those eyes!”

Arta had owners asking to change the cushions as they were unhappy with the plane’s decoration and others were disappointed because she didn’t have their choice of drinks.

The crew member explained the owners always send over a “preference sheet”, where they specify what they want to eat and drink on board as well as other special requests they have.

“Something that is not in your control at all. When guests complain about certain things not being there even though it was not on their preference sheet, we simply cannot carry all the items as the galley space is limited.”

Another negative thing about being a VIP crew is “that you miss events at home like birthdays or Christmas”.

“But I really don’t consider them to be the worst things as you are at home for so much more in comparison to working every day from 9-5.

“It also doesn’t mean you always miss those things. One year you are home, the next you might be at work, and next year there is another birthday and another Christmas.”