Potter in the Lakes: On the eve of a groundbreaking Beatrix Potter retrospective at London’s V&A museum, here’s how to follow in the writer’s enchanting footsteps

When Beatrix Potter wrote to the four-year-old son of her old governess, she drew a rabbit on the page. It was just a doodle.

The child had been ill and needed cheering up. She could not know that this sketch in 1893 would change her own life for ever.

That bunny would become known around the world as Peter Rabbit, bringing its creator fame and fortune. 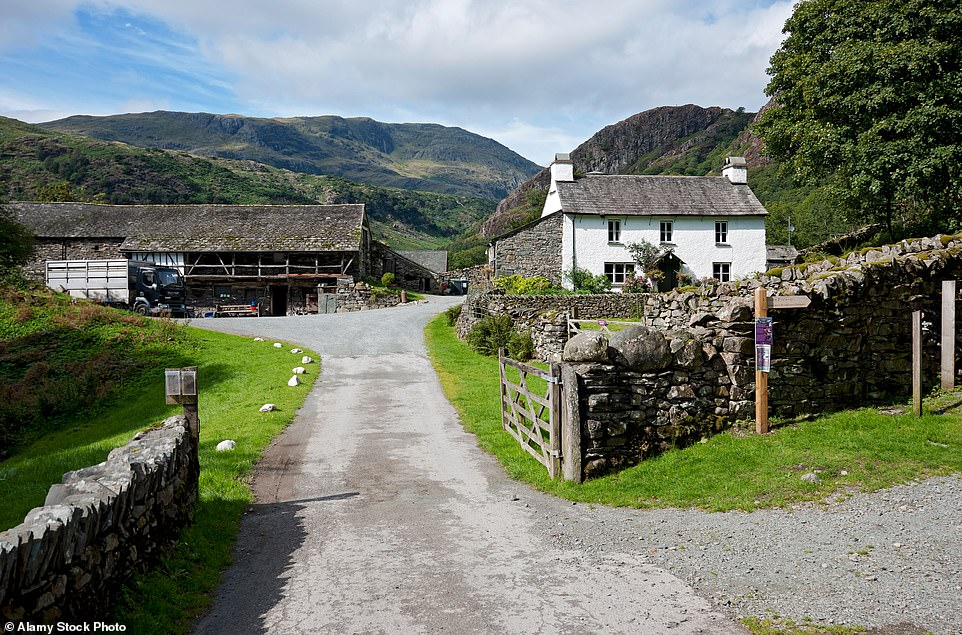 Inspirational: Yew Tree Farm, one of many owned by Beatrix Potter. The children’s author bought up thousands of acres of the Lake District 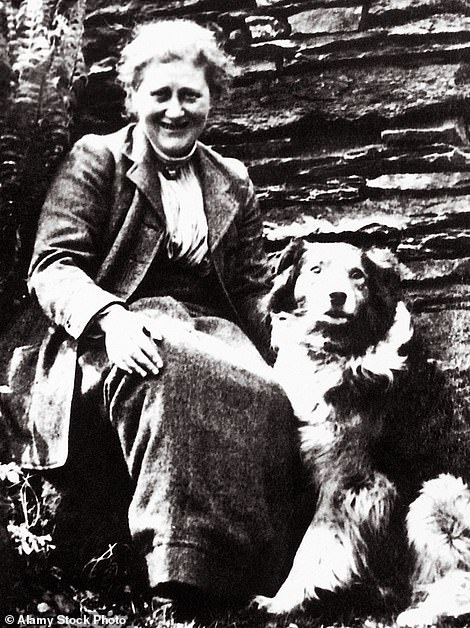 Beatrix Potter: Drawn To Nature, opening on February 12 at London’s Victoria & Albert Museum, will shed light on the author’s (pictured) life in the Lake District

With the proceeds of her nursery tales, Potter bought up thousands of acres of the Lake District and, on her death in 1943, left it all to the National Trust. That legacy is the subject of an exhibition, Beatrix Potter: Drawn To Nature, which will open on February 12 at London’s Victoria & Albert Museum. Don’t expect cute bunnies and talking squirrels: someone’s been digging in the archive.

With rare photographs and early botanic drawings on display, the show promises to be a ‘revelation’, says Helen Antrobus of the National Trust (NT) and co-curator of the exhibition. ‘We will highlight all her talents. She was not only a gifted artist but also a keen natural scientist and pioneer of conservation.’

Keen to learn more, I headed north to Near Sawrey, the Cumbrian village high above Lake Windermere, where Potter bought her first farm, Hill Top. And I discovered that her own story is just as absorbing as the animal adventures she penned.

Her journey from early life in Kensington, West London, to latter years in Cumbria brought joy and tragedy. Born in 1866 to wealthy parents, Potter would accompany them every summer holiday to the Lake District.

There, she roamed the countryside sketching and daydreaming. A frog? Jeremy Fisher. A rat? Samuel Whiskers. No wonder she described herself as a ‘town mouse who longed to be a country mouse’. 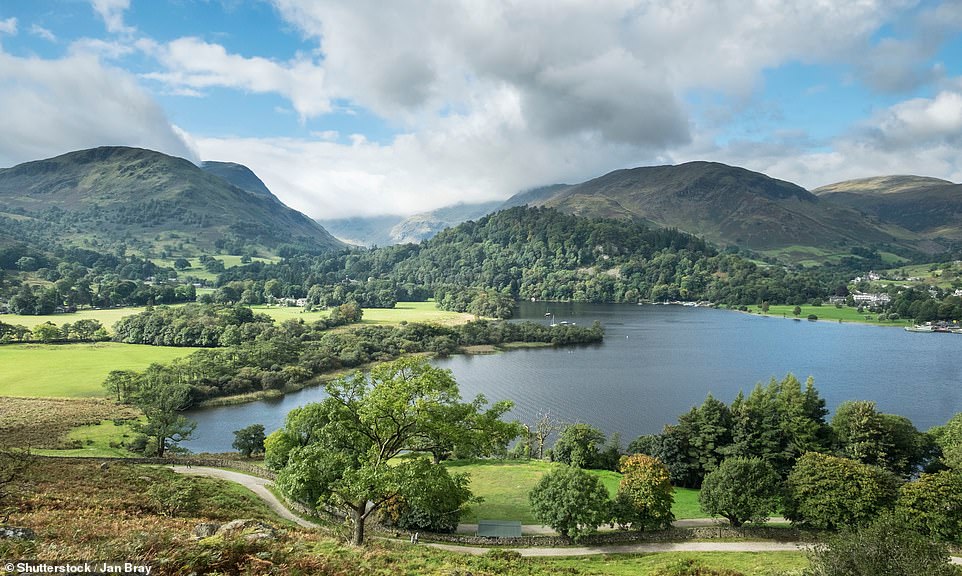 Potter spent time in Near Sawrey, a Cumbrian village high above Lake Windermere (pictured above) 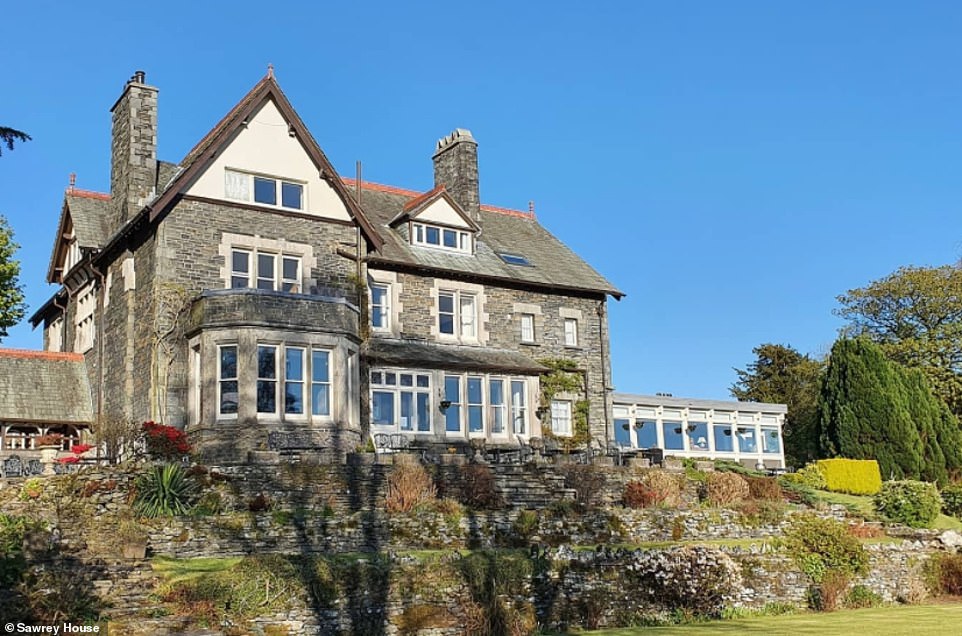 Deirdre’s base was Sawrey House, pictured, a hotel next door to Potter’s first farm, Hill Top, in the village of Near Sawrey 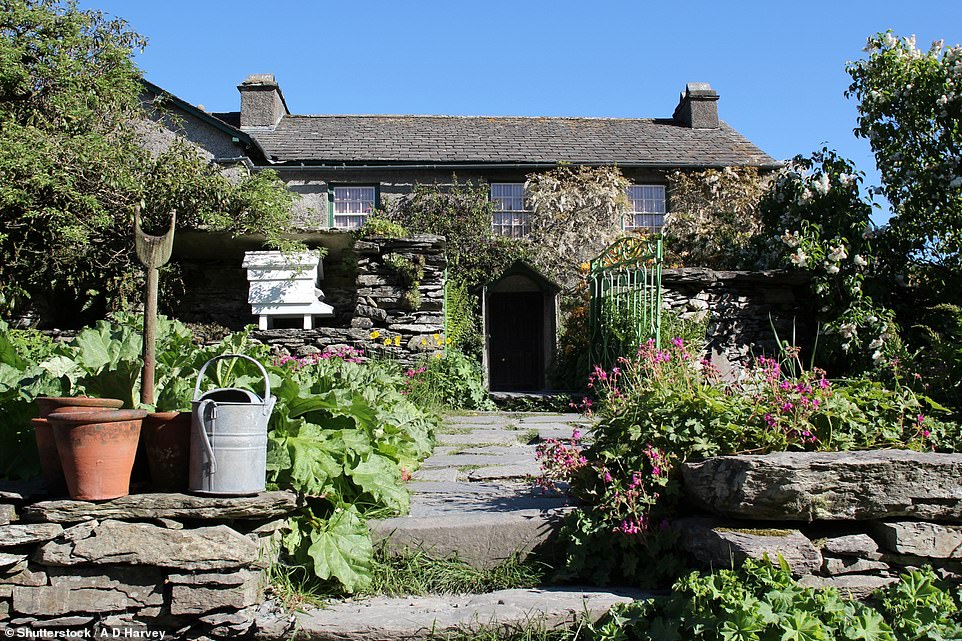 Hill Top, pictured, was the first of 14 farms Potter would acquire. It’s now a place of pilgrimage for her fans 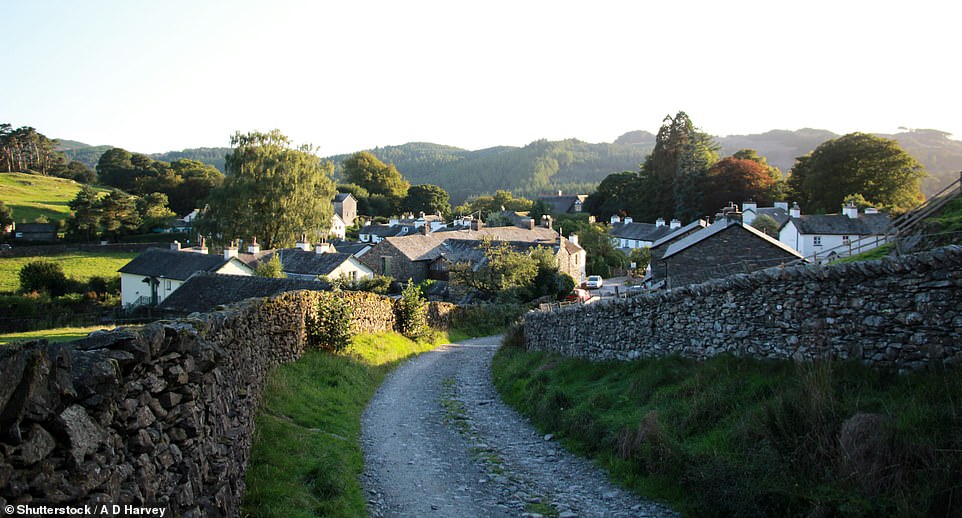 When Potter died her ashes were scattered on a hillside. The exact location is a secret. Pictured is Near Sawrey 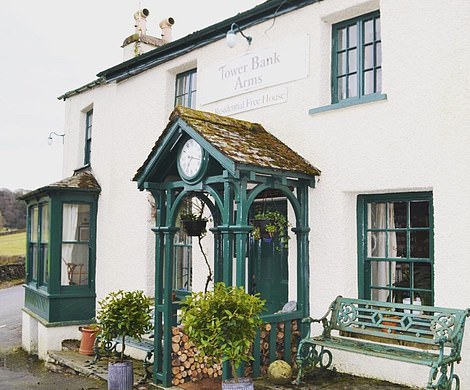 Each evening, Deirdre dines at the Tower Bank Arms in Near Sawrey, the pub depicted in The Tale Of Jemima Puddle-Duck

For a long weekend I was that country mouse, checking into Sawrey House, a hotel next door to the farmhouse at Hill Top, now run by the NT.

Potter left strict instructions for the display of her personal belongings: her doll’s house, Peter Rabbit figurines, her best china on the table.

Perhaps she guessed that this would become a place of pilgrimage after her death.

The weather didn’t look propitious: the skies were leaden and the summits looked murderous. Yet I awoke the next morning to a vision of brightest white: snow-dusted hills and frosted stone walls. Beyond lay Esthwaite Water, a view that enchanted Potter. ‘It really strikes me that some scenery is almost theatrical or ultra-romantic,’ she wrote. 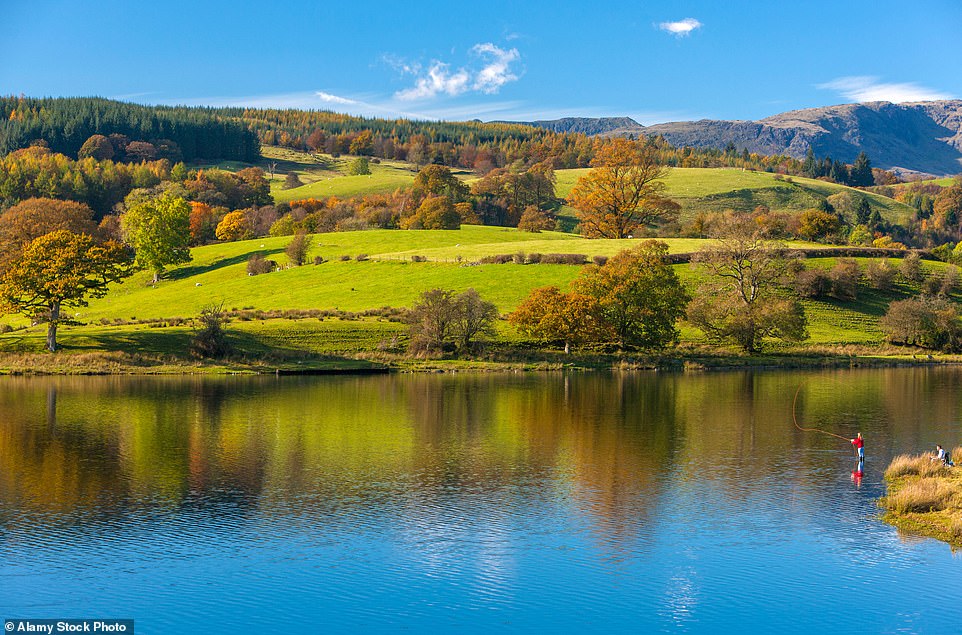 Splendid isolation: Fly-fishing on Esthwaite Water. According to Deirdre, the view of the lake ‘enchanted Potter’ 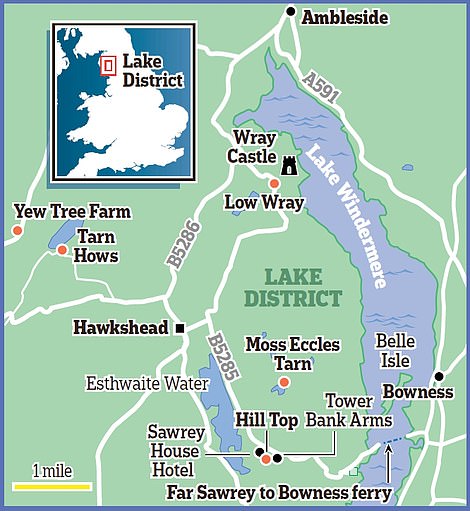 Each day followed a perfect pattern: a leisurely breakfast, the piling on of warm layers and then off. Emergency supplies (cheese sandwiches and chocolate) in my rucksack; a booking at the Tower Bank Arms, the village pub depicted in The Tale Of Jemima Puddle-Duck, for supper.

With my nose in the OS map, I climbed the farm track from the village leading up to Moss Eccles Tarn, her favourite constitutional. After 40 minutes or so, I reached an expanse of blue water, passing one woman along the route.

We smiled and nodded, the local etiquette. I tried to imagine Potter trudging along these steep paths, walking stick in hand. Did the ghosts of Squirrel Nutkin and Benjamin Bunny haunt her walks?

She certainly haunted mine. Zig-zagging across fields back to the village, I tried to imagine her youth in London. Battling against a society that offered no education to women, only marriage, she was determined to steer her own course.

Instead of making social calls with her mother, she would steal away to the Natural History Museum to draw its specimens.

She hoped that her plain looks might put off suitors. As she once confessed: ‘I’m glad I’ve got ruddy cheeks and a big nose.’ She also once said of herself: ‘I feel like a bull in a drawing room.’

A family friend encouraged her to turn her sketchbooks into stories. When Frederick Warne published The Tale Of Peter Rabbit in 1902, it was a sensation, reprinted several times within a year. With the royalties she earned, Potter bought Hill Top, the first of 14 farms she would acquire.

More tales followed. And, to her surprise, a late romance. Aged 39, she fell in love with Norman Warne, the son of her publisher, and the couple became engaged. This provoked a family outcry: Warne was in trade, after all.

Her parents insisted they spend the summer apart: if their love could survive such a separation, they could marry. Yet before the season was out, Norman was dead, succumbing to leukaemia at the age of 37. All Potter’s dreams of a life in the Lakes with him were dashed. 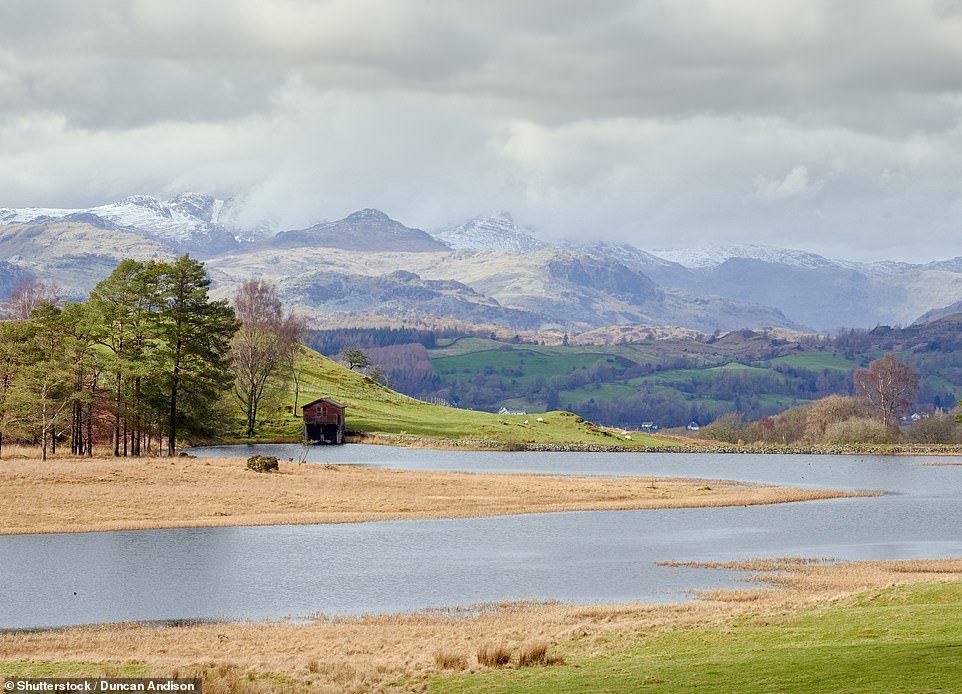 ‘With my nose in the OS map, I climbed the farm track from the village [Near Sawrey] leading up to Moss Eccles Tarn (pictured),’ writes Deirdre 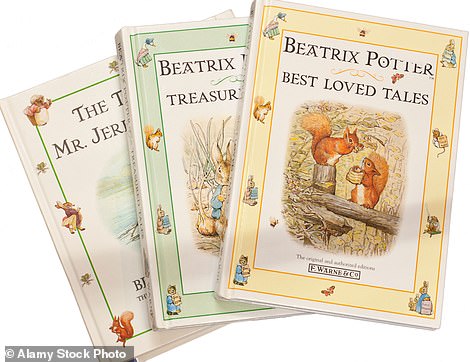 Much loved: Potter’s stories were inspired by the Lake District

Eight years later she married William Heelis, a solicitor from Hawkshead who had been handling her business affairs. She never had children.

Potter was happy to put writing aside and devote herself to farming. She realised that the landscape of hill farms she cherished was under threat from developers — it wasn’t until 1951 that the area was designated a national park.

She spent her last 30 years snapping up estates as they came up for sale and installing tenants. Beatrix Potter, the world-famous author who was to sell more than 250 million books, was now content to be plain old Mrs Heelis, breeder of native Herdwick sheep. Dying in 1943, she wanted her ashes to be scattered behind Hill Top.

By far the most famous of those bequests is the land surrounding the beauty spot of Tarn Hows, a lake that sits high above Coniston with views of the high fells. 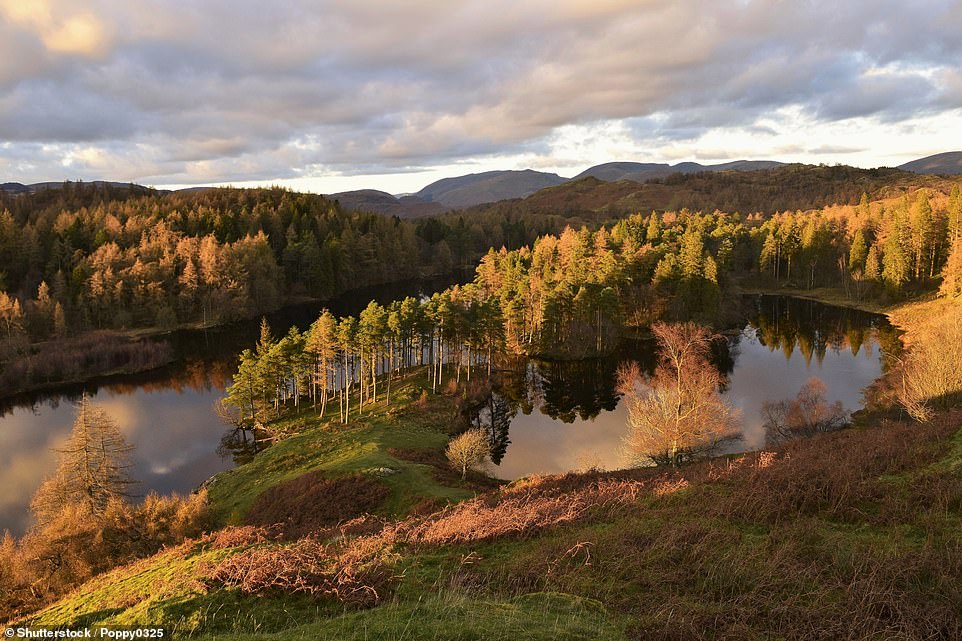 According to Deirdre, the area surrounding Tarn Hows, pictured, is ‘by far the most famous’ piece of land that Potter left to the Trust 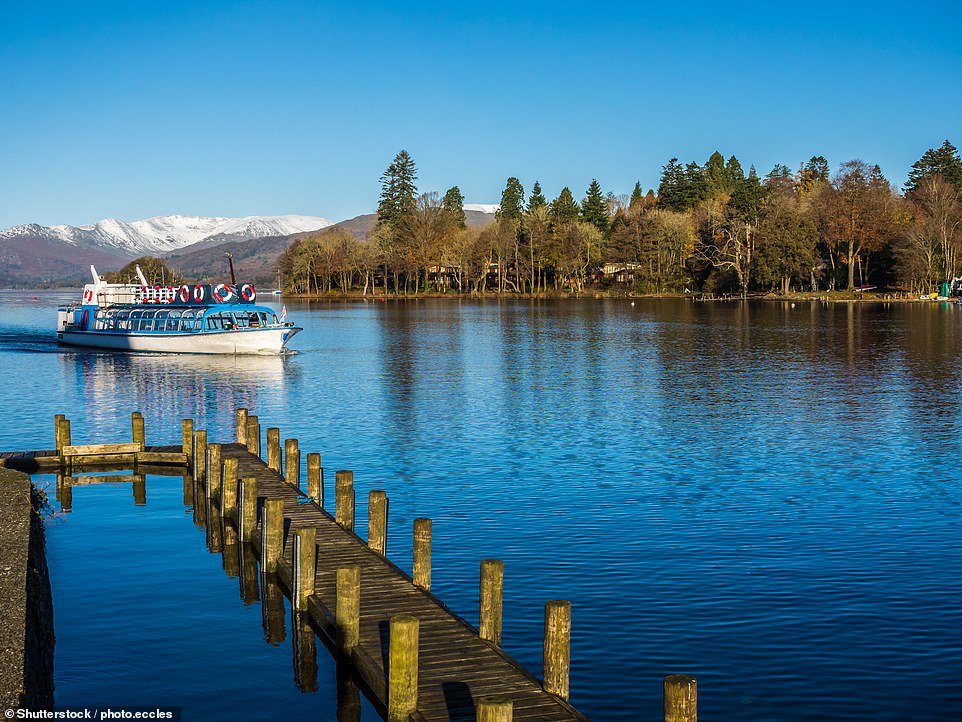 ‘I rounded off my trip with another of her jaunts: a walk downhill from Near Sawrey to Far Sawrey to take the ferry across Windermere to Bowness,’ writes Deirdre. Pictured is the Bowness waterfront 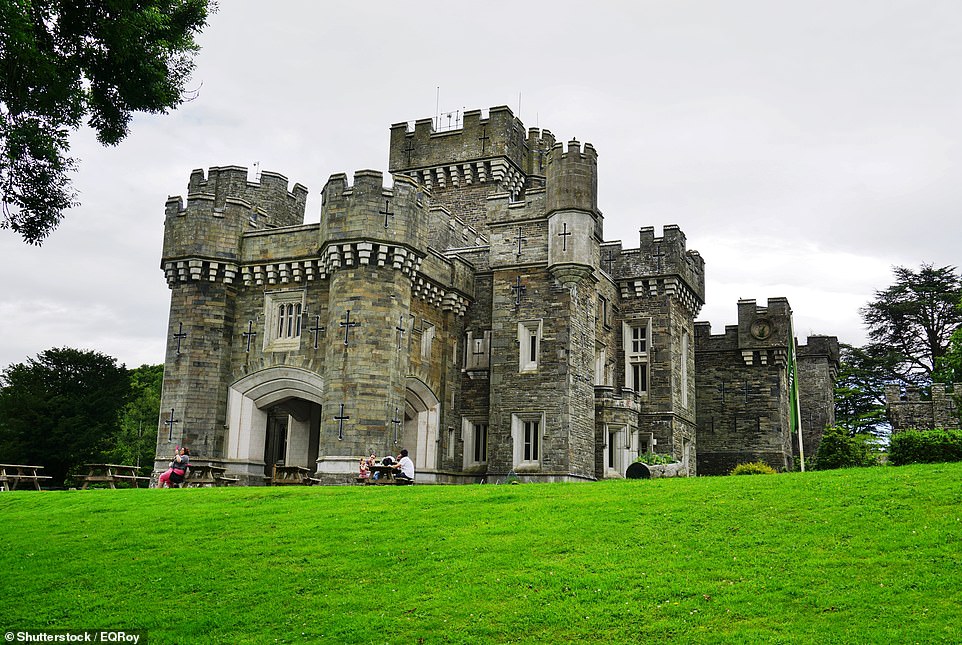 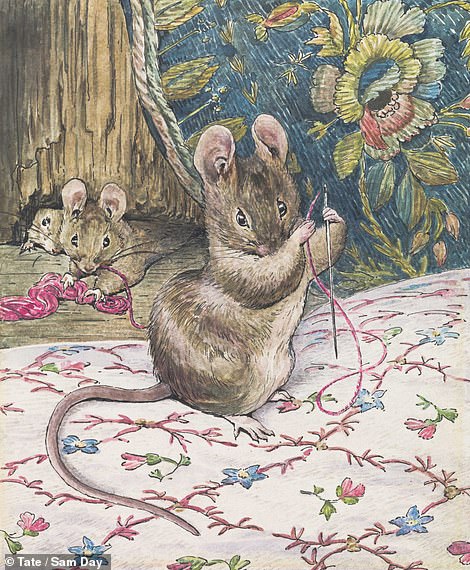 On show: Potter’s original watercolour for The Tailor Of Gloucester

Here, you follow the shoreline for two miles. It struck me, not for the first time, that Potter was beside me. The grandeur I was enjoying that wintry afternoon was exactly what made her spirits soar. The landscape is essentially unchanged. ‘It seems we have done a big thing,’ she once said of her conservation work.

I could only explore a fraction of her 4,000-acre bequest. There remained the grounds of Wray Castle, the first house her parents rented. And I had wanted to summon the ghost of Mrs Tiggywinkle on Catbells, the fell above Derwentwater.

I rounded off my trip with another of her jaunts: a walk downhill from Near Sawrey to Far Sawrey to take the ferry across Windermere to Bowness. The bracken on the hills was the colour of an Orange Pippin. Potter remained modest about her achievements, shying away from fans. In her shabby old tweeds, she was hard to recognise anyway.

But one young visitor knew who she was. He was six-year-old Roald Dahl, who would become another venerated children’s author. ‘I’ve come to meet Beatrix Potter.’ he managed, quite overcome. 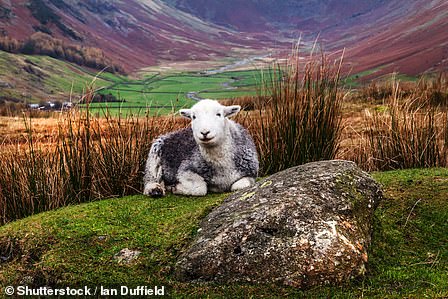 A Herdwick ewe in the Lake District. Potter was passionate about the superiority of this breed of sheep

1. An early manuscript of The Tale Of Peter Rabbit contained a gruesome drawing of Peter Rabbit’s father being stuffed into a pie by Mrs McGregor. It was deemed too distressing for children and removed.

2. When Potter died her ashes were scattered on a hillside. The exact location is a secret.

3. Everything at Hill Top is exactly as she left it — except for the fireplace in the hall. Visitors were so disappointed that it looked nothing like that in her stories, a more traditional one was put in.

4. Mr McGregor’s garden isn’t at Hill Top. The most likely site is the Lingholm Estate, Derwentwater, privately owned and open to the public (thelingholmestate.co.uk).

5. In the 2006 film Miss Potter, starring Renee Zellweger and Ewan McGregor, Yew Tree Farm, near Coniston, stood in for Hill Top. Hollywood didn’t think the Potter farmhouse made the grade.

6. Potter set up a tea room at Yew Tree Farm. Today, it is a holiday cottage and also has workshops on Herdwick sheep. (yewtree-farm.com).

7. She was passionate about the superiority of Herdwicks. This hardy native has a darker, thicker fleece than other breeds, meaning they can overwinter on the fells.

8. Potter was never happier than when tending to her flock. Dressed in tweeds with a sack draped over her shoulders to keep off the rain, she was once mistaken for a tramp.

9. Relations with her mother were always strained. ‘My mother is so exacting… it does wear a person out,’ she once remarked.

10. Her charitable work was immense. She paid for district nurses, including midwives, in her area. She also encouraged Girl Guides, allowing them to camp on her land.