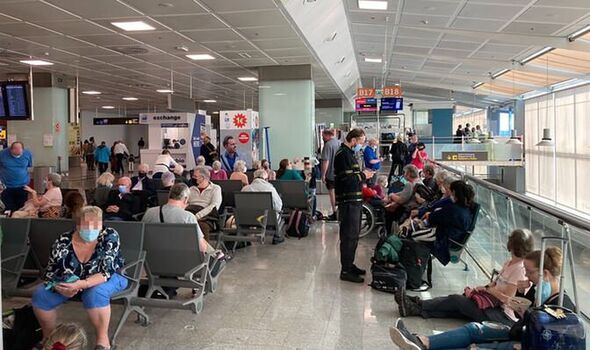 Mark Holling has been left “stuck in Tenerife” with his wife and kids after a string of delays on his Jet2 journey left him begging to go home. The family was due to fly from Edinburgh to Madeira on Monday morning, but an initial delay of one day was placed on his flight, meaning it was rescheduled on Tuesday.

But on Tuesday, the plane could not land at its destination in Madeira, Portugal, due to the weather.

It instead was diverted to Tenerife where Mark still waits for further instructions on how to make it to Portugal.

A photo shared by Mark shows several tourists also on his flight waiting at an airport in Tenerife.

Speaking to Edinburgh Live, the dad said: “On Sunday evening they told us the flight was delayed by one day. That left Tuesday morning but couldn’t land in Madeira due to weather problems. After holding we were diverted to Tenerife, sat there for two and a half hours then into the airport where we queued to be allocated to hotels (and our family group was initially divided between two).

“To be fair, that was the only time we had unpleasant Jet2 staff. We left the hotel at 8am to come to the airport for 11am flight. Started boarding and some of the groups went through, goodness knows where they are now, then postponed again and awaiting update. Still waiting, quite a few folk are thinking we should give up and be taken home.”

Two days of what Mark had hoped was a pleasant week-long break in Portugal have now been consumed by travelling and waiting.

The family cannot extend their holiday as Mark’s daughter is due back at university on Monday.

Mark continued: “It’s more than two days lost, we should have had Monday afternoon, all of yesterday and all of today in Madeira.

“Even if we do try again we’re unlikely to be at our hotel before it gets dark and I’m not optimistic that we’ll be able to leave here today.”

Jet2 have been approached for a comment on the issues.