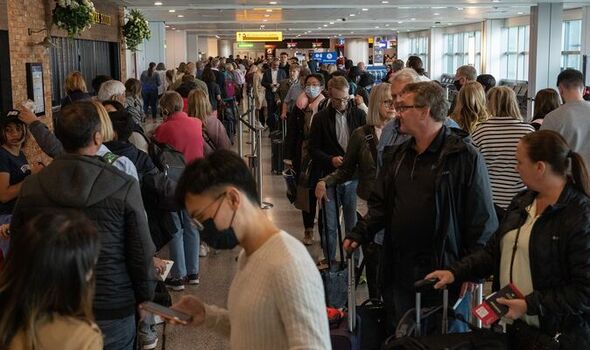 Huge check-in lines stretched back “three lengths of the airport” at Birmingham and travellers are steeling themselves for more disruption after British Airways workers voted to strike this summer. Heathrow check-in staff will walk out in a dispute over pay.

And union Unite says 16,000 BA employees, from cabin crew to engineers, could join them.

Yesterday, passengers were forced to wait outside the terminal building at Birmingham, with one saying they encountered the “worst queues I’ve ever seen”.

Passenger Tim Perry-Ogden branded the situation a “disgrace”, with long lines outside by 5am.

There were similar scenes at Manchester, labelled “another absolute shambles”, and where the situation was not helped by travel firm TUI’s website being down.

Stansted, Bristol and Heathrow were also packed as fears rise about the prospect of industrial action.

Boris Johnson wants people “to get around the table” to resolve the dispute, but the PM added: “I don’t think there are justifications for these strikes.”