Desperate British tourists could be seen running to get the best spot as soon as the hotel’s swimming pool opened at 8am in a video shared on social media.

Holidaymakers at four-star Spring Hotel Bitacora in Playa de las Américas, Tenerife, could be seen queueing next to the swimming pool gate at 6am to get the best sunbeds.

It is believed some of the hotel guests waited for as long as 90 minutes.

In the video, some can be seen running and then throwing their bags and towels to take their favourite spot by the pool.

Tourist Chloe Turner, who captured the video, explained this was her “family favourite” resort. 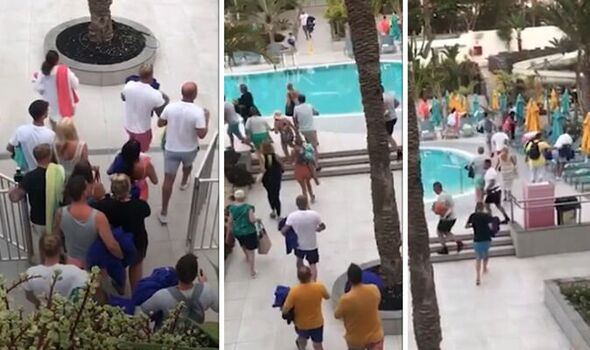 Holidaymakers stood there from 6:30am until gates opened at 8am.

Chloe explained: “So I’m in Tenerife and everyone’s running to secure their sunbed spot.”

She posted another video the following day saying: “Another day, another sunbed war.”

TikTok users took to the comment section to share their thoughts with Icela saying: “That is not a holiday!!”

Another one, @umm.so_not.ab1, commented: “I was there from July 29 to August 9 and my dad said it was like that. I stayed in the same hotel.”

Lauren Kent said: “Nightmare holiday to be honest. Who wants to sit beside a pool all day? Blows my mind.”

“I stayed here, good hotel but this is ridiculous,” commented Natalie Jane.

Traveller mia said: “I’ve been to this hotel, it’s awful in the mornings and there’s not even half the amount of sun beds there should be.”

TikTok user Snake Eater commented: “Don’t you travel to places like this to visit the sea and the beautiful beaches?

“Why lay around the pool all day long…”

“These videos make me giggle so much,” added another one.

The increase in holiday bookings in Spain this year has had an effect on prices as the new average cost of a hotel stay is now 200 euros per night.

According to a report by Simon-Kucher & Partners, hotel prices have skyrocketed this month with the accommodation being 42 percent more expensive than last summer.

The average daily rate in Spain’s coastal areas, such as the Balearic Islands or Costa del Sol, has increased to 168 euros in August.

In cities like Barcelona, there has been a rise in prices of 17 percent compared to the previous year.