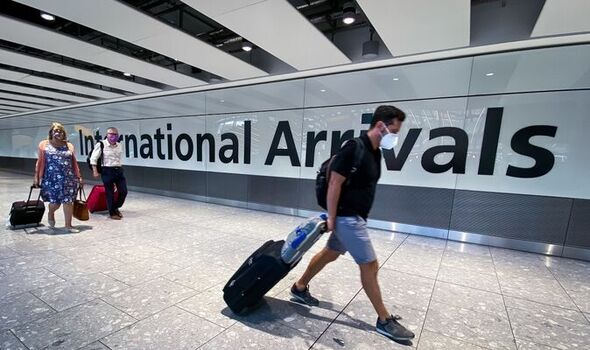 Mr Javid follows Transport Secretary Grant Shapps and Prime Minister Boris Johnson who have both signalled their desire to get rid of the Passenger Locator Form (PLF) for travellers abroad. The travel industry wants the paperwork – which holidaymakers have to complete before returning to the UK – to be abolished in time for the Easter school holidays in April.

The decision is not down to the Health Secretary alone, but his stance has emerged just days after Mr Johnson confirmed that the requirement to fill in the complicated form would be reviewed shortly.

Scrapping the forms, seen as a drag on British holiday firms as well as a bureaucratic nightmare for travellers, would be hugely welcomed by the industry.

Tim Alderslade, chief executive of trade body Airlines UK, said: “You don’t need a form to order a table in a restaurant or buy a drink, whether you’ve been vaccinated or not, so why should they be required for travel.

“The Government has rightly removed the remaining domestic restrictions and is not basing policy on vaccination status.

“It now needs to be consistent and fair to aviation and the travel sector by getting rid of testing for the unvaccinated and removing the PLF which now serves no purpose whatsoever.”

A spokesman for the Association of British Travel Agents said: “Given the relaxation of domestic Covid measures, we believe all Covid-related restrictions on international travel should be removed unless they serve a clear public health objective.

“While recent simplifications of the PLF have helped, the UK’s system for collecting passenger data is much more complex than that used by many other countries. It’s time to get people travelling again.”

Just last week, Tory MP Huw Merriman, chairman of the Commons transport committee, urged the Prime Minister to “give the travel industry a much-needed shot in the arm” by getting rid of the PLF by Easter.

He said: “Now that we’ve ended self-isolation and removed all Covid restrictions, the PLF has become totally redundant and needs to go.

“It’s a drain on international travel, the sector arguably most impacted by the pandemic.

“To leave this cumbersome and intrusive document in place has absolutely no logic and only adds insult to injury.”

And there have been reports that Mr Shapps is also fully behind ditching the forms.

Labour MP Ben Bradshaw, a member of the transport committee, said: “Now that people can freely wander round the UK with Covid, the PLF is totally redundant.

“It should be scrapped immediately as it’s holding back the recovery in our travel and transport sectors compared with other countries.

“The UK should do what most other European countries are now doing, which is simply check vaccine or test status at check-in without the need to fill in this over-complicated Orwellian form.”

Under current guidelines, UK arrivals have to fill out a passenger locator form, which must be completed 48 hours before arriving in the country, to let authorities know who they are, where they’ve been and how to contact them in case of a COVID-19 emergency.

Some Covid travel bureaucracy has been scrapped.

Get the latest three-day weather forecast where you live. Find out by adding your postcode or visit InYourArea

Earlier this month, the provision for fully vaccinated travellers to book a day two test was dropped.

Unvaccinated travellers must, however, take a Covid test in the two days before their departure and book a PCR test to be taken two days after they arrive in the UK.”

A Government spokesman said ‘no decisions have been taken’ on scrapping PLFs, adding: “We have already simplified the forms as part of our efforts to make travel easier.

“We will keep all measures under review and will be updating our contingency plans to fight any new variants ahead of Easter.

A Government spokesman said ‘no decisions have been taken’ on scrapping PLFs, adding: “We have already simplified the forms as part of our efforts to make travel easier.

“We will keep all measures under review and will be updating our contingency plans to fight any new variants ahead of Easter.