The Wild West… in BRITAIN: Inside the amazing festival that sees a slice of Lincolnshire filled with gunslingers and frontier-style tents

Twice a year, a quiet slice of the British countryside is transformed into the hustle and bustle of the Wild West, complete with cowboys, quick draw competitions and line dancing.

The amazing scenes are courtesy of The British Westerners Association (BWA), one of the UK’s longest-running Western associations, which transforms the tranquil Lincolnshire countryside into the gunslinging old west of the 1800s.

Everything from the clothes attendees wear to the canvas tents they sleep in and the food they cook is era-appropriate. 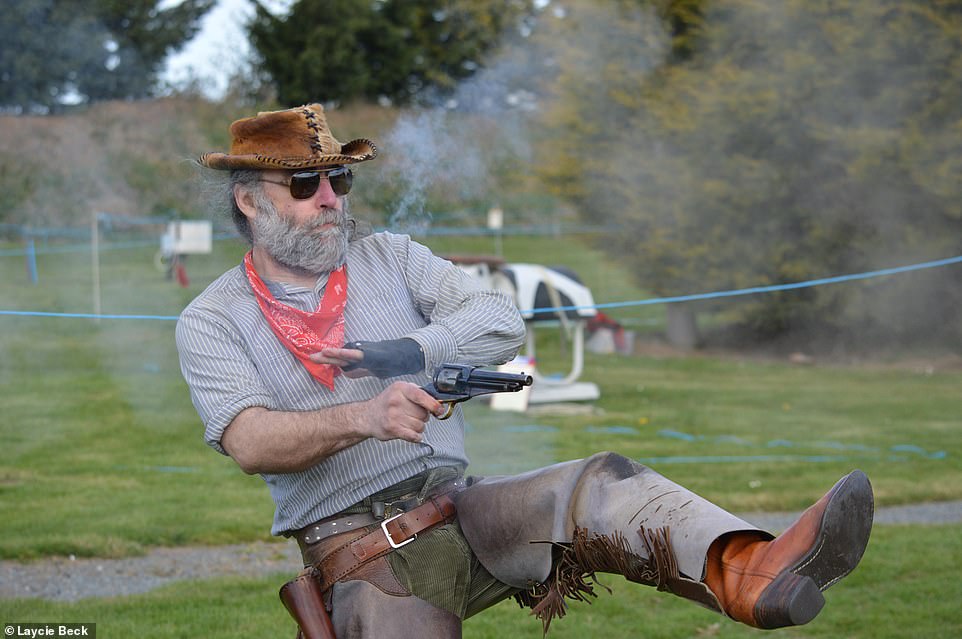 Twice a year, The British Westerners Association turns a slice of tranquil Lincolnshire countryside into the gunslinging old west of the 1800s. This picture, taken by MailOnline Travel’s Laycie Beck, shows competitor Andrew Barrett taking part in a fast-draw contest at this year’s event 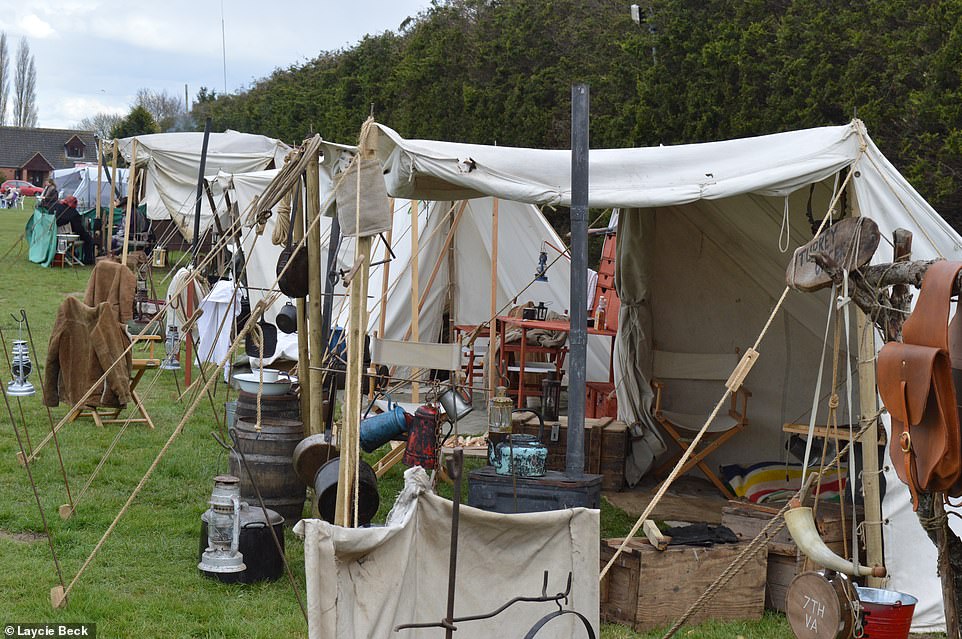 At the events, everything from the clothes attendees wear to the canvas tents they sleep in and the food they cook is era-appropriate

Many members relied on campfires to provide not just warmth, but to cook their meals, make hot drinks and fill old-fashioned pot hot water bottles.

Since 1973 the association has boasted a vast community of Western and American history enthusiasts across the UK, as well as members in Europe and some as far as the USA, with interests ranging from the pioneers, American Civil War and emergence of the Wild West gunslingers to the modern-day rodeo.

The fast draw is one of the key highlights of any BWA event. This is where competitors travel from all over the country and compete to see who can draw and fire their (replica) gun the quickest. 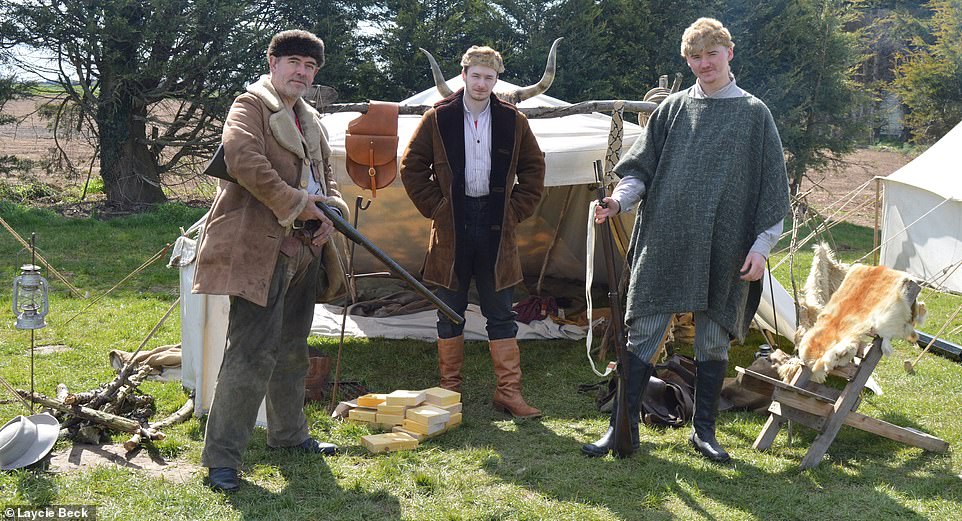 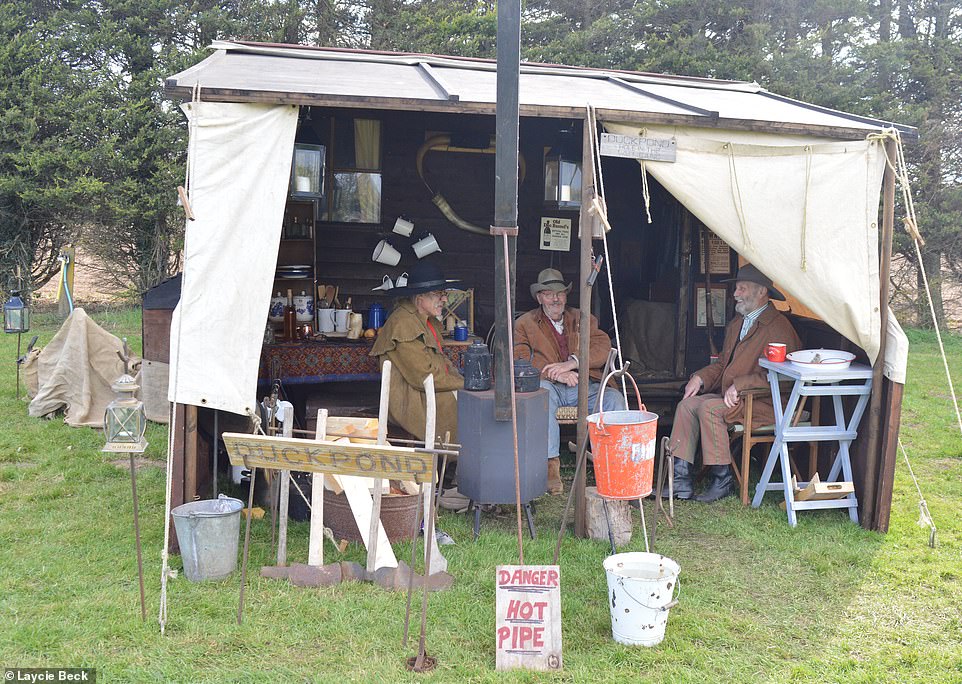 Pictured here are James Green, Keith Robinson and David Smithson in their frontier abode at this year’s Wild West get-together 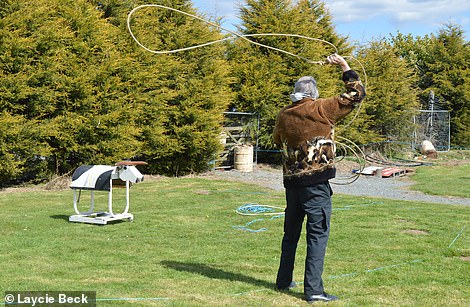 In this year’s event, the ‘Spring Round-Up’ – which took place from Thursday, April 7, to Sunday, April 10 – more than 100 people participated, ranging from toddlers to members in their late eighties, despite the chilly mornings and intervals of rain and wind.

The Saturday night of each event is an evening for members to dress up in their Western finery, with men in their coats and hats and ladies in gowns.

Participants at the April Wild West event take part in a ‘Turkey Shoot’. More than 100 people came to this year’s festival – the ‘Spring Round-Up’ 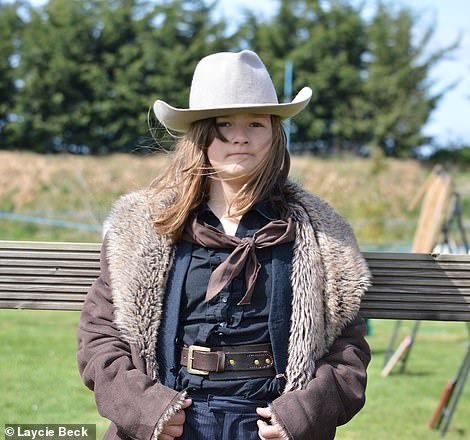 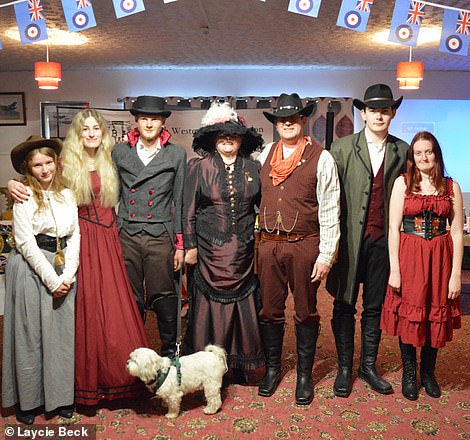 The winners of the fast draw, games and the best authentic camp are celebrated with an awards ceremony, before members take to the floor for a spot of line dancing and a traditional hoedown.

Chairman of the association, Mark Firth, told MailOnline Travel: ‘The BWA was an idea to bring enthusiasts of the Old West together, to meet, have fun and share knowledge.

‘Since 1973, we have had at least two round-ups per year without fail until the pandemic hit.’

Mark continued: ‘The association is proud to be what we think is the longest-running association of this type in the UK – everyone is welcome, no one is excluded and we encourage people to do what they want and to get as deep into the hobby as they wish.

‘A couple of members from the original group that formed the BWA still come to the round-ups, and we have families with young children who love to come and join in the fun.’

Next year the association will be celebrating its 5fiftieth anniversary and hope to make the 2023 events extra-special for its members and other enthusiasts.

The BWA currently runs its ‘Round-Ups’ at the Anglia Motel, Fleet Hargate, near Holbeach in Lincolnshire. More information can be found at britishwesterners.weebly.com.