Sweet side of the Marzipan city: A taste of the ‘wonderfully Willy Wonka-esque’ place in Germany that turned an almond treat into an art form

Lubeck is famous for several things: its seven spires and its former status as the capital of the Hanseatic League. And then there’s marzipan. More specifically Lubecker Marzipan, which is, like Champagne and Gouda cheese, EU’s list of foods with protected designation of geographical origin.

The jury’s out on its origins; some believe it dates back to the 1400s, when failed harvests prompted bakers to use almonds to make a bread known as marci panis (bread of St Mark). Others point out that the almond-based sweets which once arrived here from Asia on merchants’ sailing ships were adorned with the image of a ruler. And in Arabic, ‘mauthaban’ means ‘sitting king’.

Either way, almonds, most of which came from the Far East, were never in short supply in Lubeck, a UNESCO-listed city filled with half-timbered former merchants’ houses. Even the poor lived well here, due to the belief that philanthropy would smooth wealthy traders’ passage to heaven.

Fittingly, one of the marzipan sculptures displayed at Niederegger’s flagship store (a sickly sweet tribute to the world’s oldest marzipan brand), depicts Lubeck’s Holsten Gate, a gothic tower which dates back to the 1400s. Today, it houses a museum which explores Lubeck’s Hanseatic history, and exhibits include collection boxes once found outside the city’s numerous guilds. 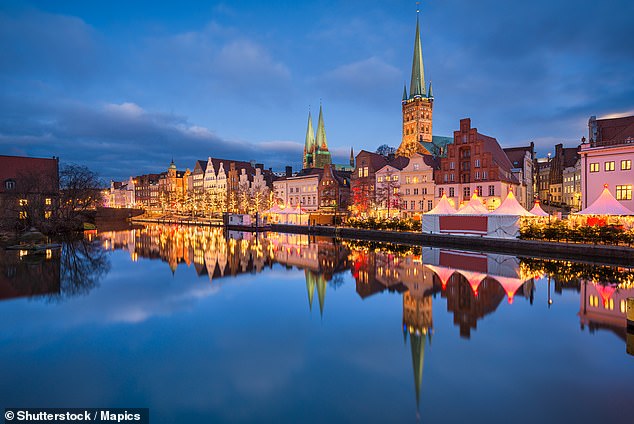 The Niederegger marzipan brand was founded by confectioner Johann Georg Niederegger in 1806, and remains in the hands of his descendants. Simnel cakes look rather plain after a visit to its store, opposite the thirteenth-century Lubecker Rathaus, the gothic townhall in which Hanseatic League members once met.

Niederegger’s flagship store is inside a building which contains the Niederegger café and its marzipan museum. In the ground floor boutique, supermarket-style shelves heave with marzipan oranges, apples and onions. There are rows of marzipan dinosaurs next to fleets of marzipan sports cars and packets of marzipan tea. Seasonal sculptures are Niederegger’s speciality (at the time of my visit, the centrepiece is an army supersized Easter bunnies), although the most elaborate sculpture is a bust of Johann Georg Niederegger.

It’s all wonderfully Willy Wonka-esque. Over a slice of the café’s legendary marzipan cake, Niederegger’s Kathrin Gaebel reveals that previous marzipan sculptures have included a Big Ben, a replica of Cologne’s cathedral and marzipan sushi sculptures for a music festival. Kathrin explains that marzipan’s key ingredients are sugar and almonds, with rosewater providing floral notes. The almonds should provide the taste, but their high price means many brands rely heavily on sugar. 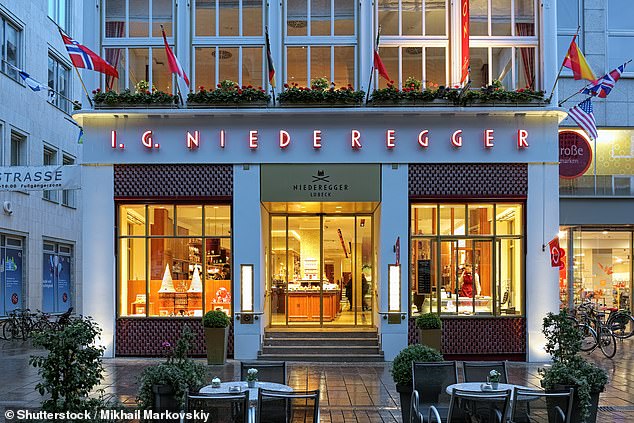 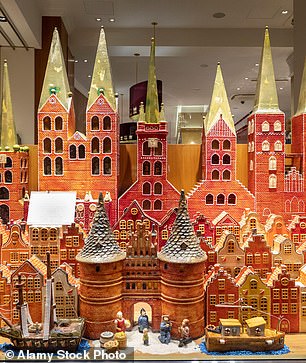 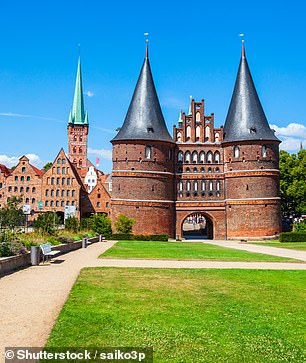 One of the marzipan sculptures (left) displayed at marzipan brand Niederegger’s flagship store depicts Lubeck’s Holsten Gate (right), a gothic tower that dates back to the 1400s

‘Almonds are expensive, so there’s much more sugar in cheap marzipan,’ says Kathrin. ‘EU guidance states that Lubecker marzipan must have a fixed ratio between almonds and sugar, and with ours, the taste is definitely down to the almonds.’

Kathrin adds that she regularly meets visitors who say they don’t like marzipan’s cloying sweetness, only for them to change their mind once they’ve tried marzipan made by EU-certified producers, all of whom must be based in Lubeck.

That said, I’m still sceptical about some of the flavours (300 and counting) made by Niederegger. ‘Every year we create a special flavour,’ says Kathrin. ‘We’ve done a cola and whisky version, and we also tried a chocolate marzipan, but it didn’t work. We recently produced a salted cashew marzipan which was delicious, and this year, we’ve done a caramel version, which was lovely.’ 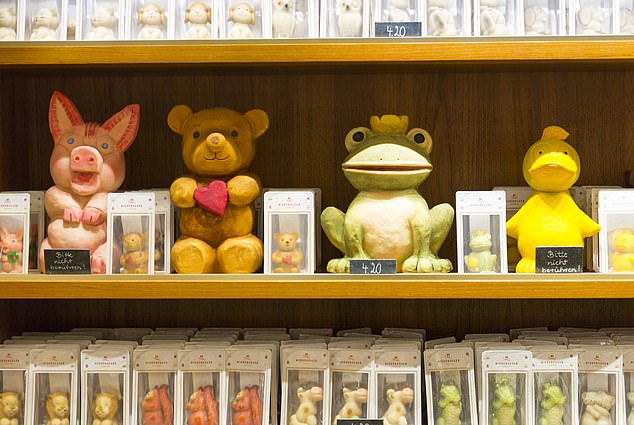 Sweet treats in the Niederegger shop. Tamara writes of the store: ‘There are rows of marzipan dinosaurs next to fleets of marzipan sports cars and packets of marzipan tea… all wonderfully Willy Wonka-esque’

Easyjet has return flights from London Gatwick to Hamburg (an hour’s train ride from Lubeck) from £21.99 one way (easyjet.com). Lubeck’s Motel One has rooms from £65 per night (motel-one.com). To find out more about Niederegger, visit niederegger.de/marzipan.

She adds that the Niederegger factory, just outside Lubeck, churns out 30 tonnes of marzipan every day, and ships products worldwide. The biggest markets include the UK, Australia and China.

Walking through Niederegger’s marzipan museum, one floor up from the café, provides a fantastic insight not only into marzipan but into Lubeck’s history. The night before, I’d dined at the nearby Schiffergesellschaft, a beer hall and restaurant which dates back to the 1500s and was once a seafarers’ guildhall.

During storms, seafarers would hunker down here, passing time by making wooden models of ships, many of which now dangle from the beer hall’s ceiling. They bear a startling resemblance to the model ship which takes pride of place in Niederegger’s museum, although there’s one major difference – this one (right down to the sails and portholes) is made from marzipan.

My favourite sculpture in the museum has an uncanny resemblance to Leonardo da Vinci’s Last Supper – a row of life-sized busts depicting figures who played a role in both Lubeck’s and marzipan’s past, including a nun (marzipan was one of the few foods they could eat when fasting) a pharmacist (in the 800s, influential Persian physician Rhazes extolled the medicinal qualities of almond-based concoctions) and Emperor Charles IV, who declared Lubeck one of the Roman Empire’s Five Glories.

Visitors can sign up for Niederegger’s marzipan tasting masterclasses, sampling six marzipans and six wines. These include Lubecker Rotspon wine, another Lubeck speciality – a wine imported from Bordeaux and aged in Lubeck (the tradition dates back to the fourteenth century, when bottles were loaded onto Lubeck-bound ships).

There are also marzipan-making masterclasses, during which visitors use a 3D printer to make bespoke creations. Whether Johann Georg Niederegger would approve remains to be seen, although I suspect he would.

My personal line in the sand, however, is the marzipan pasta I spot in a nearby souvenir shop.