A powerful tribute to Mother Earth: Lavish book presents images by one of the world’s best nature photographers he hopes will reconnect readers to the wild world around them

A cheetah sipping warily from a waterhole, an eagle preying on a red fox and a macaque with a pilfered mobile phone.

These are just a few of the eye-catching images featured in a new coffee table book that’s been created to inspire readers to reconnect with nature and protect it.

The book features more than 200 of the landscape and wildlife images that Marsel has taken over the past 15 years and has chapters on Africa, the Americas, Asia, Europe and Antarctica.

In the introduction to the book, he writes: ‘Mother is a tribute to Mother Earth. I like the word. It’s simple and powerful, familiar, warm, and full of emotion. We all have a primal connection to our mother, and similarly to Mother Earth. We are all bonded.

‘But she is under serious threat and desperately needs our protection. We are more likely to protect something we feel close to, so I’m hoping that Mother will reconnect people to nature.’ Scroll down to see a selection of some of the most powerful images from the book…

Marsel titled this incredible image that he took in Kenya ‘Panzer division’. He explains: ‘To get this wide-angle, low-viewpoint image of a crash of rhinos, I lay motionless in a narrow ditch that was located in the direction they were heading. Their eyesight is quite poor, so they rely on their sense of hearing and smell. When they got really close to check me out, I used silent mode on my Nikon Z7 to not startle them’ 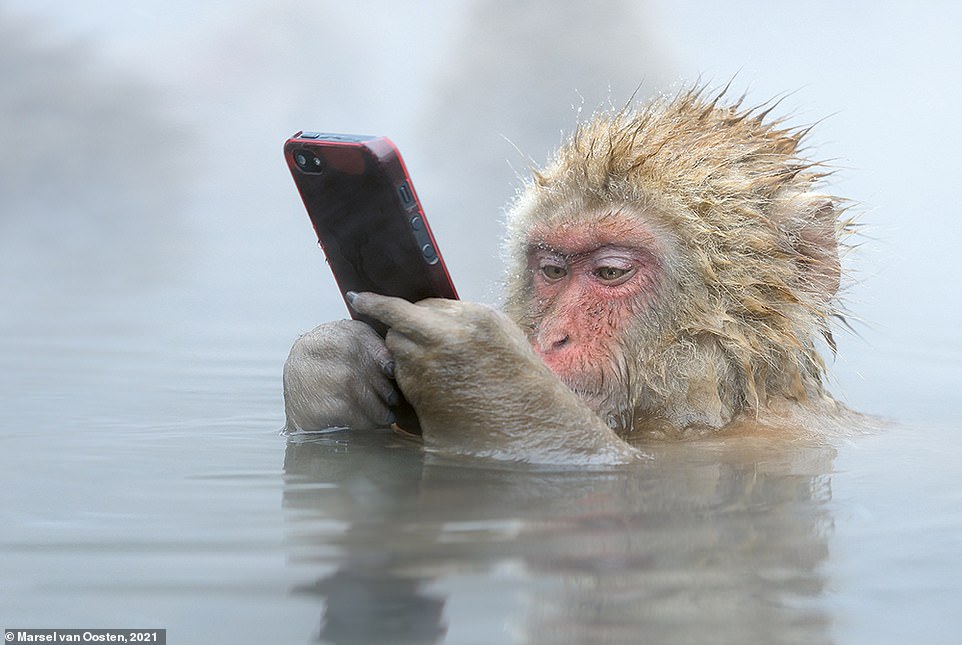 Taken in Japan, this unusual shot won Marsel the People’s Choice Award in the 2014 Wildlife Photographer of the Year contest. He reveals: ‘When a tourist got too close to a macaque to get some closeups with her smartphone, the macaque snatched it from her hands and started playing with it in the hot spring. At some stage, it held it just like a human. This image has gone viral on the internet, and it is my most stolen image’ 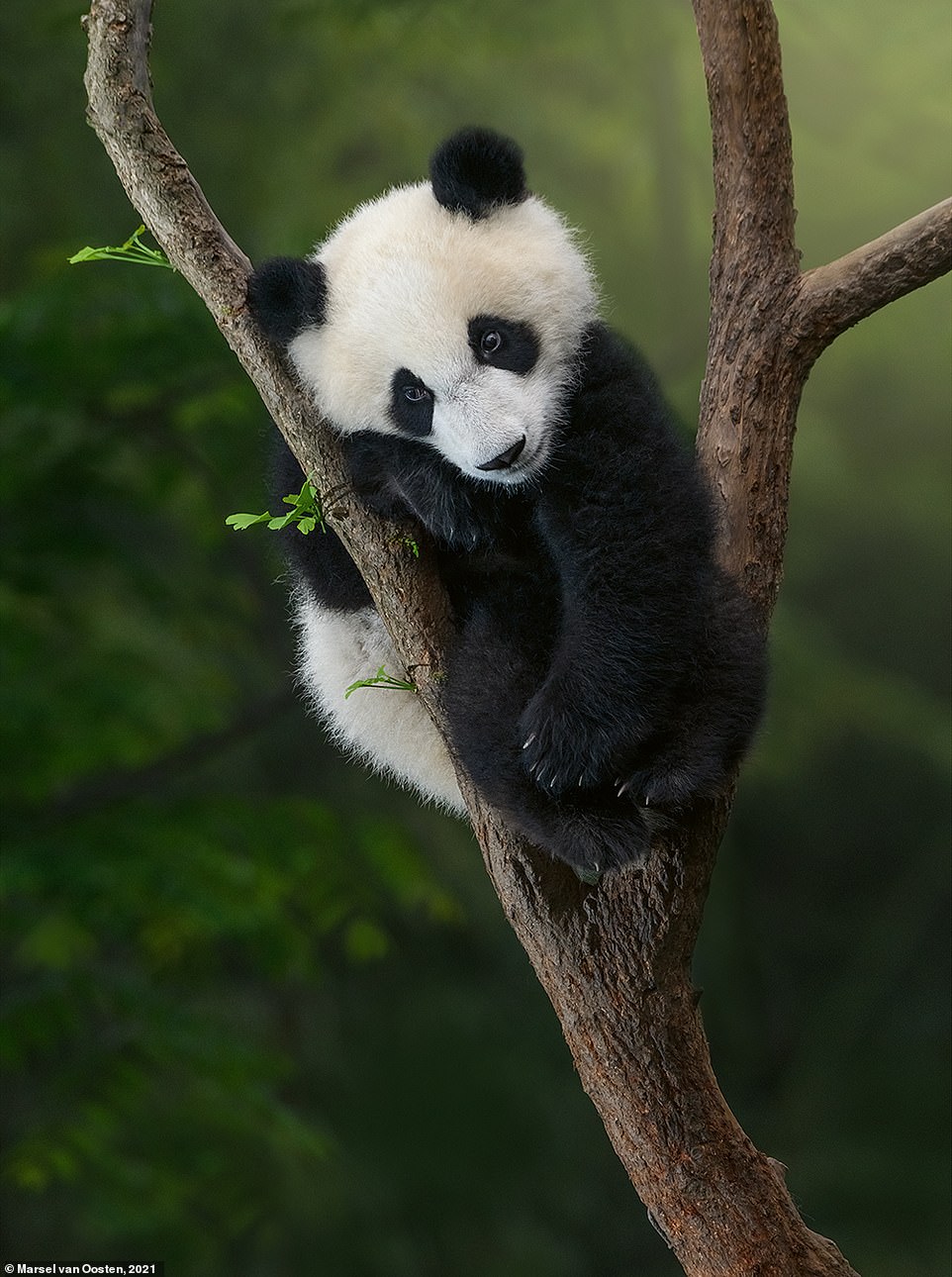 ‘When a panda cub is born, it is pink, blind, and toothless, weighing only 90 to 130g (3.25 to 4.5 oz), proportionally the smallest baby of any placental mammal,’ Marsel explains in the book. He adds: ‘One to two weeks after birth, the cub’s skin turns grey where its hair will eventually become black. A month after birth, the colour pattern of the cub’s fur is fully developed.’ He took this cute snap in China 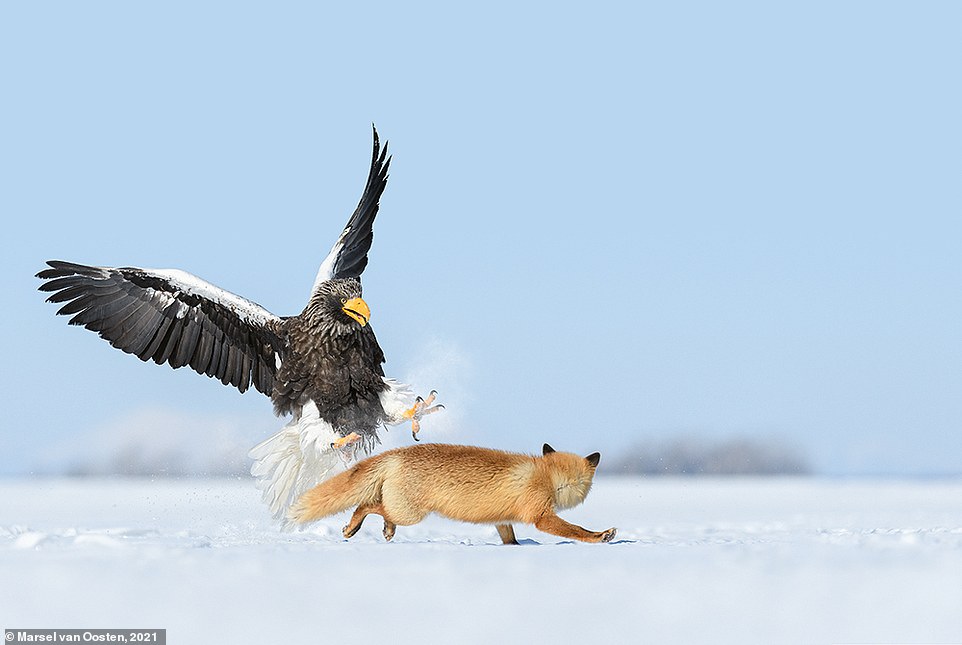 This powerful image is named ‘Eternal Adversaries’ and it was taken in Japan. Marsel says: ‘On average, the Steller’s sea eagle is the heaviest eagle in the world, at about 5 to 9kg (11 to 20lb), and it is one of the largest raptors overall. They mainly feed on fish, but they occasionally prey on red fox and even small domestic dogs. Foxes often try to steal fish from the eagles, and this eagle was chasing it off for that reason’ 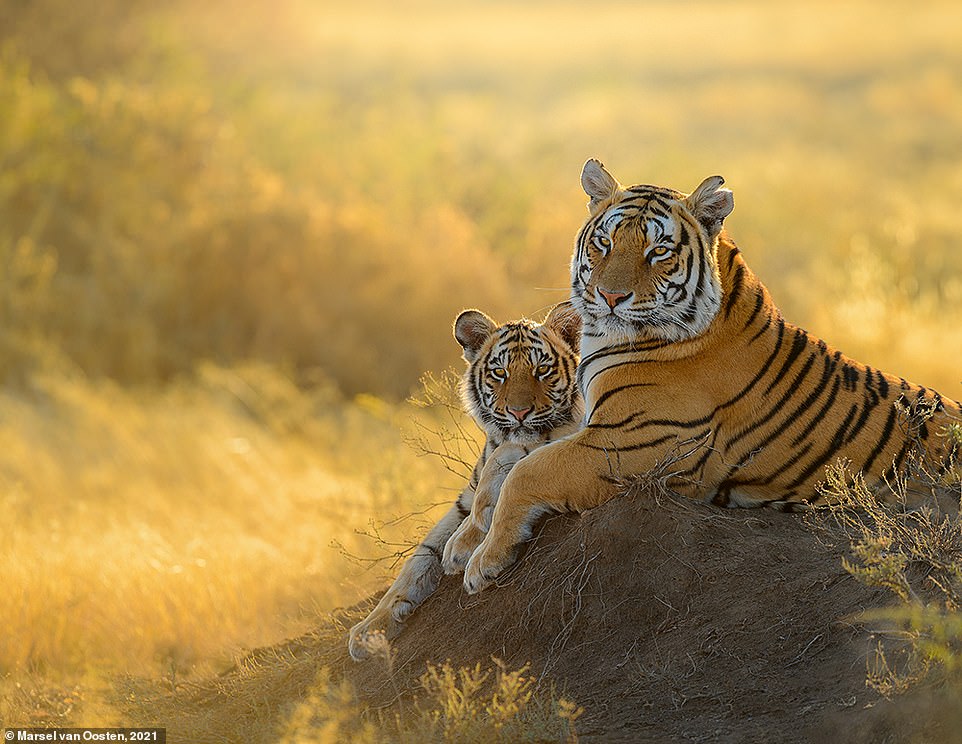 This majestic image of a tiger and her cub was snapped in South Africa. Marsel reveals: ‘Tigers are like humans – they all have different characters, and different behaviour. Over the years, I have spent a lot of time with this particular female as she was not only very pretty but also very relaxed. As a result, her cubs were also very relaxed almost from the moment they set foot outside their den for the first time’ 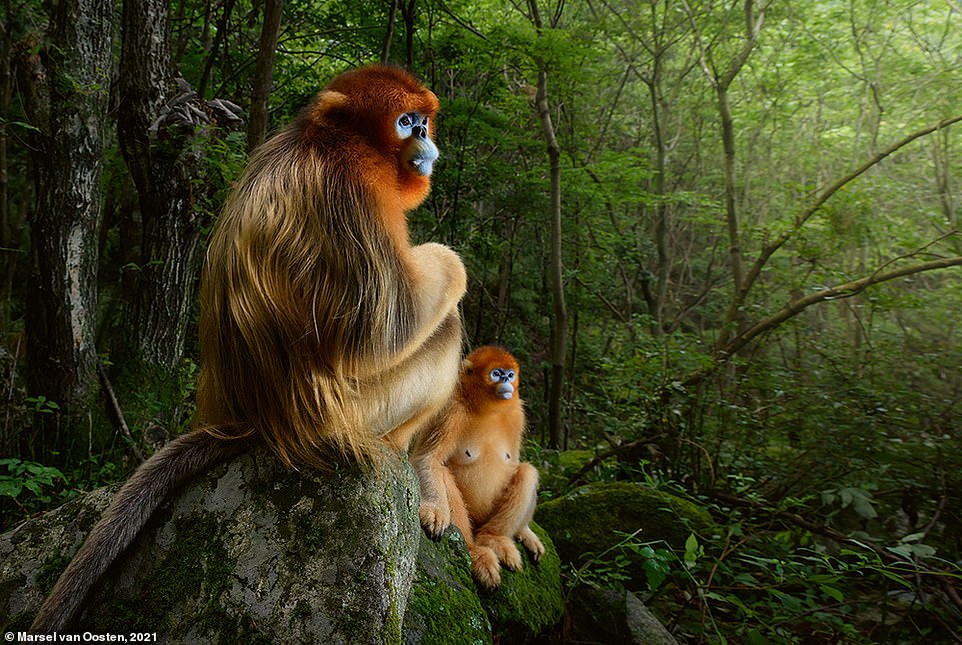 These golden snub-nosed monkeys were snapped by Marsel in China and this amazing image helped him win the title of Wildlife Photographer of the Year in 2018. He says: ‘Male golden snub-nosed monkeys have very long, golden guard hairs on their backs, and I wanted to create an environmental portrait showing how amazing that looks. I used off-camera flash to bring out their colours and to create this magical atmosphere’ 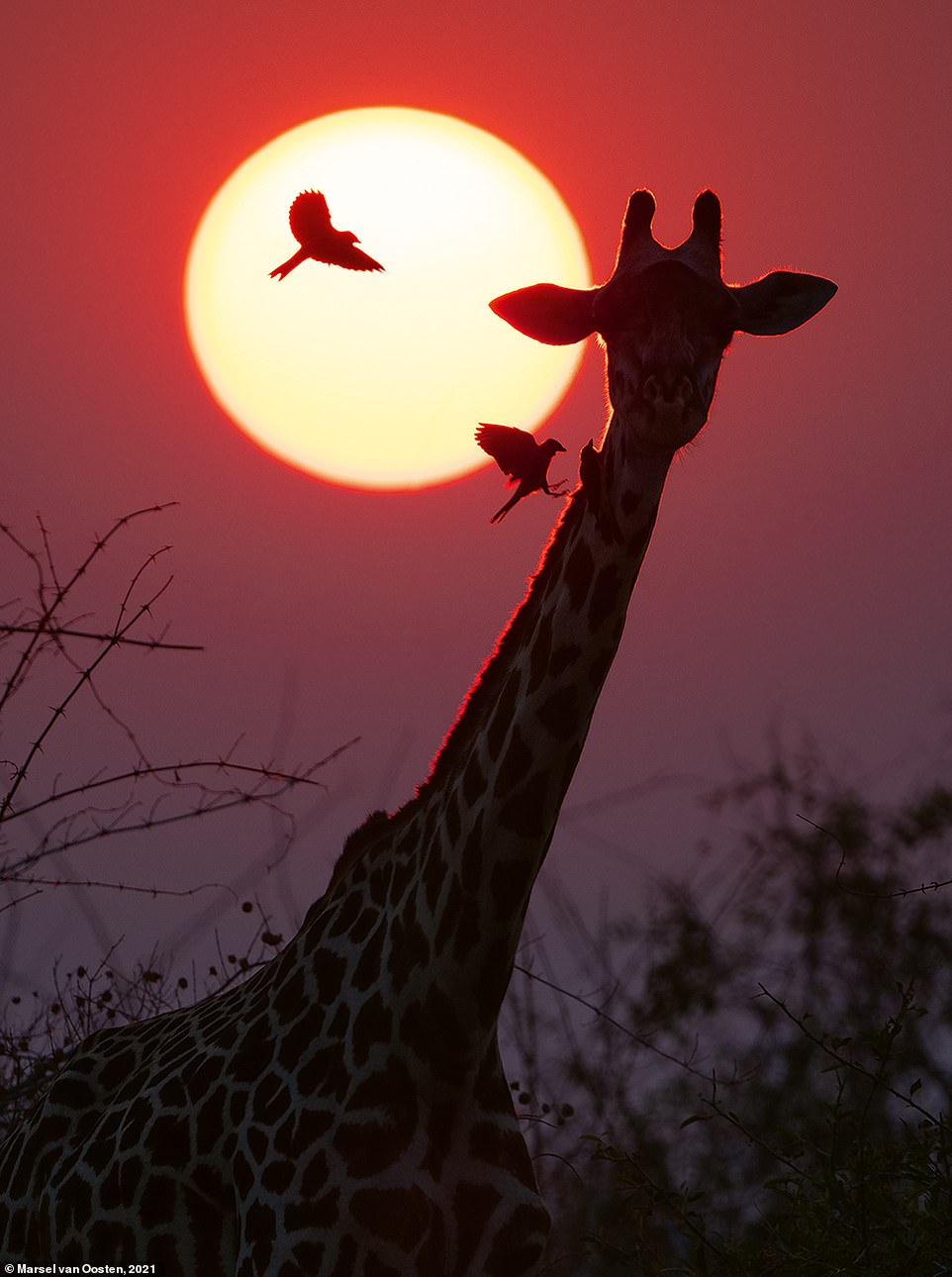 In the book, Marsel explains how he shot this incredible image on a windy morning in Botswana. He explains: ‘There was a lot of dust in the air, which can create very colourful sunrises and sunsets. This giraffe was annoyed by the red-billed oxpeckers that were harassing it. Every now and then it would violently shake its head, which made the birds fly off, only to return a few seconds later’ 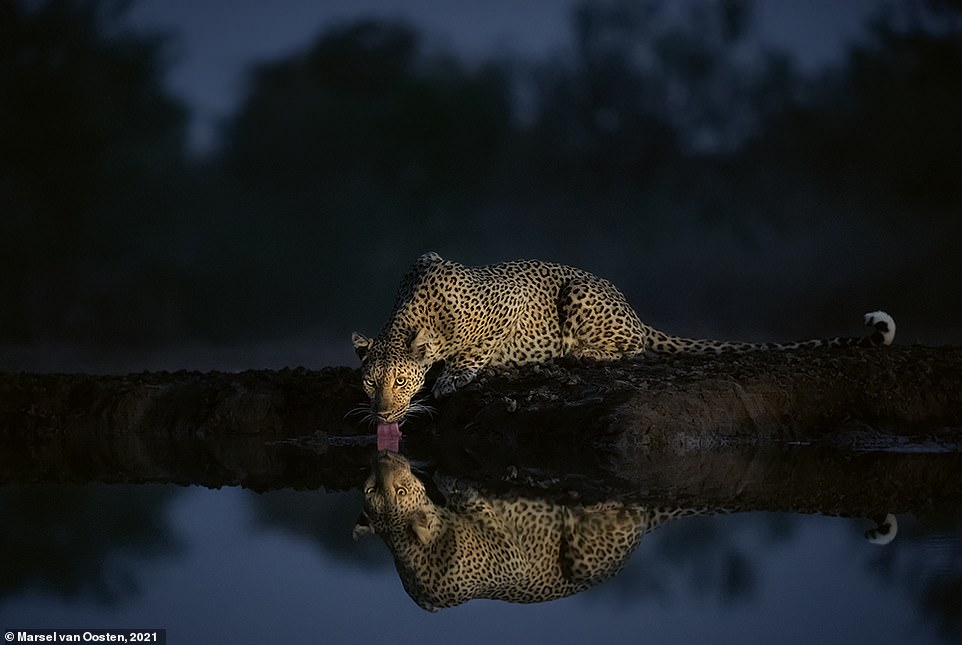 Marsel snapped this striking photo after spending a ‘long afternoon in a hide next to a waterhole in the remote eastern corner of Botswana’. It was getting too dark to take pictures but he adds: ‘As I was packing up, a leopard came down to drink and I quickly got my camera out again. I used a small headlamp and bumped up the ISO to 51200 to get this shot’ 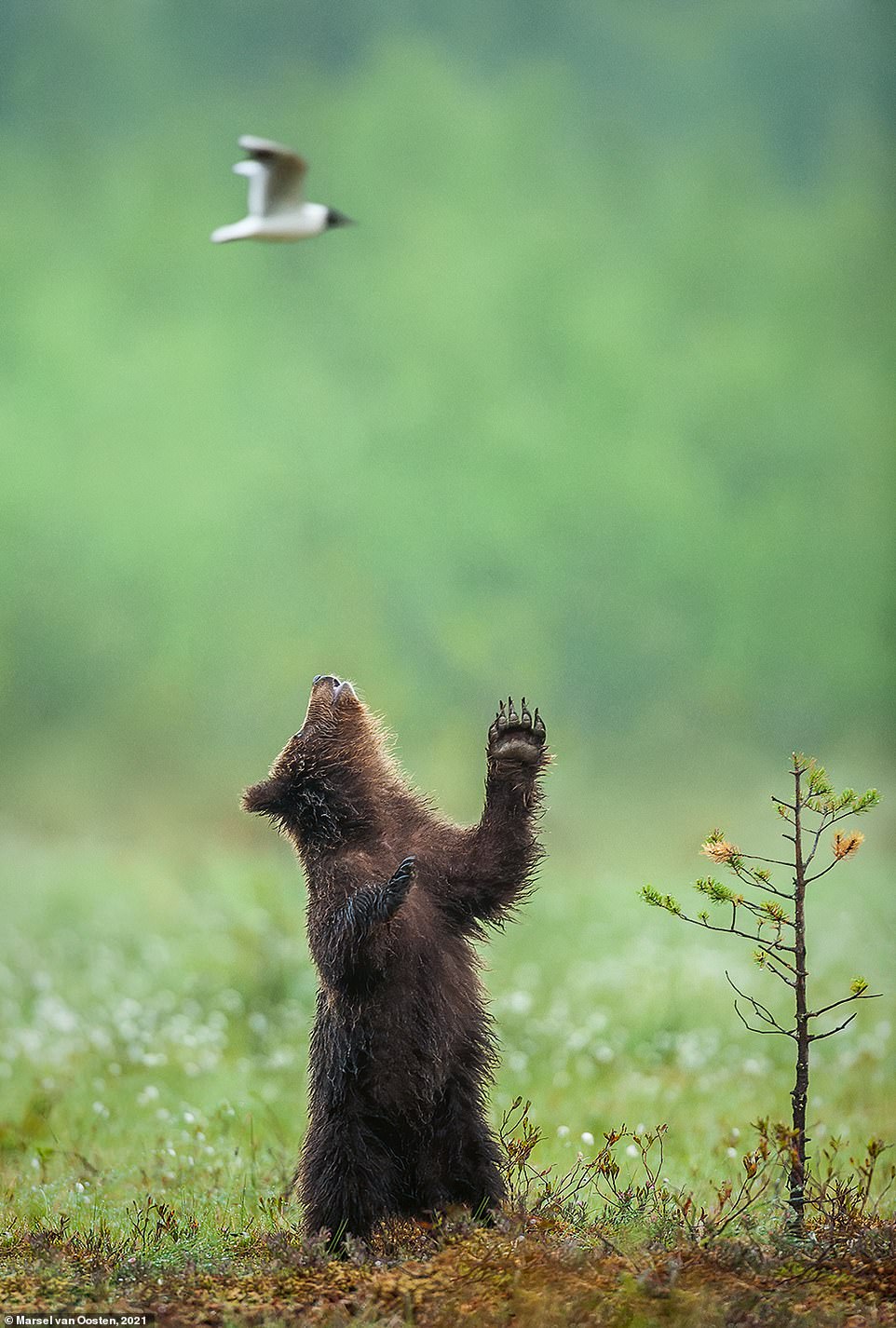 This heart-warming shot has the title ‘Distracted’ and it was taken in Finland. Marsel says: ‘I like photographing young mammals because they’re often full of energy, playful, and inquisitive – especially when temperatures are low. As this young brown bear cub walked past my hide, it started playing with that little tree. Then it suddenly got up on its hind legs to check out a gull, lost its balance, and fell backwards’ 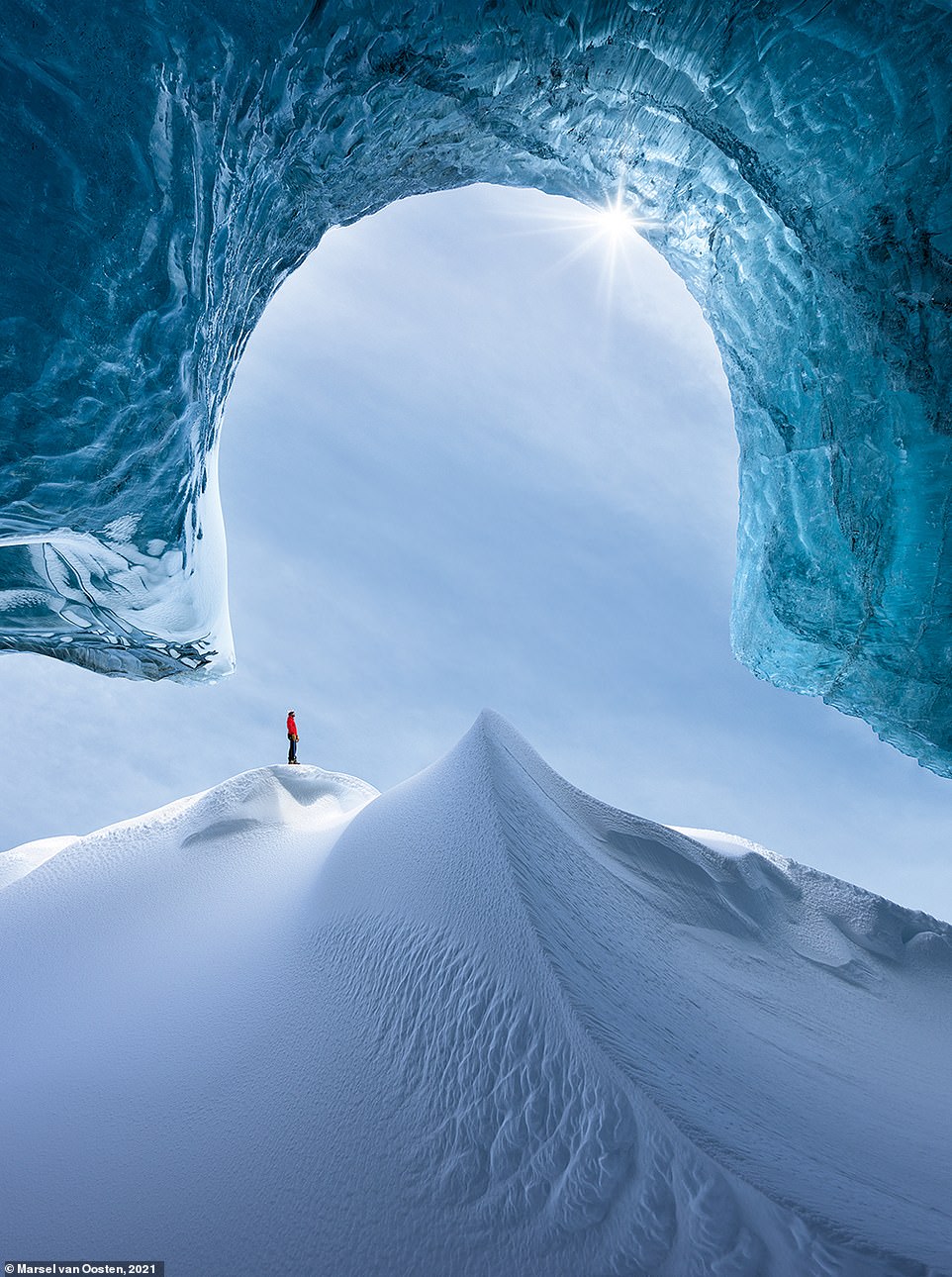 Taken in Iceland, this amazing shot is called ‘Portal to Winter’. Marsel explains: ‘Glacial caves are among the most inspiring places to photograph. Each year they’re different, but always fascinating and mind-blowingly beautiful – it’s hard to beat nature’s architecture. As so often in my landscape photography, I decided to include a human element. Without it, it would be impossible to appreciate the scale here’ 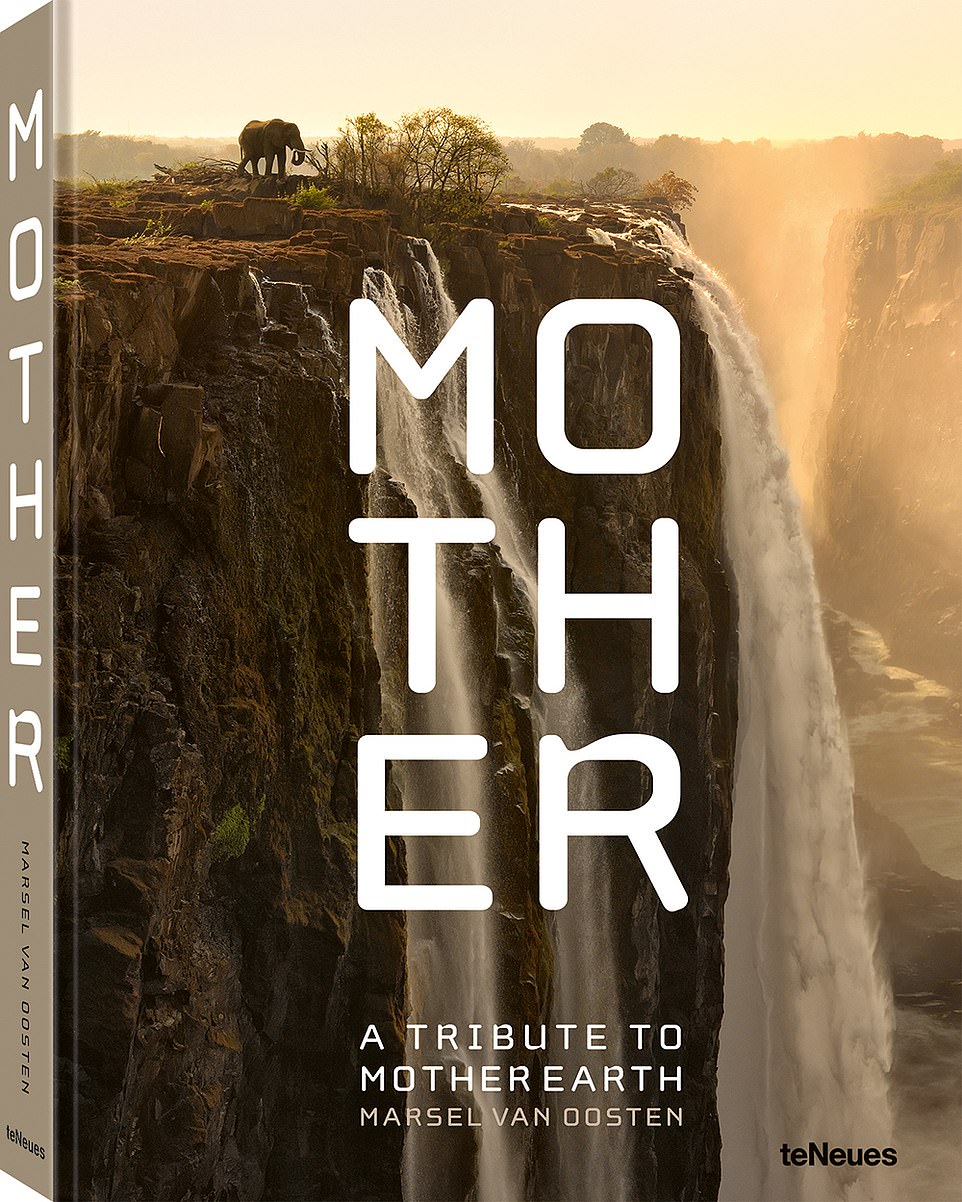 Mother – A Tribute to Mother Earth by Marsel van Oosten is published by teNeues, www.teneues.com, www.mother-book.com

Any cookies that may not be particularly necessary for the website to function and is used specifically to collect user personal data via analytics, ads, other embedded contents are termed as non-necessary cookies. It is mandatory to procure user consent prior to running these cookies on your website.