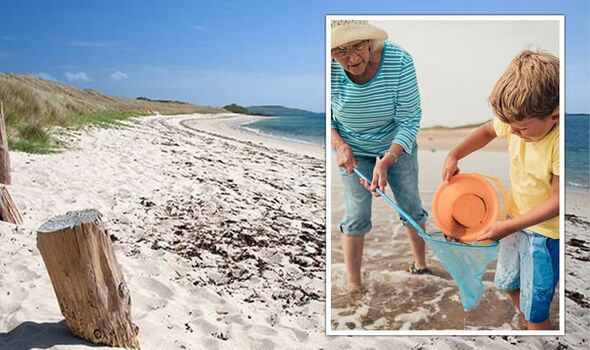 Kynance Cove has the UK’s whitest and brightest sandy beaches, as well as a beautiful coastline and endless caves to explore.

Cornwall is followed by the Isles of Scilly, which is home to the second whitest sand beach in the country: the exotic Appletree Bay.

Coming third is St Ives, another white sand beach but not as idyllic as the others are it’s one of the most popular beaches in Cornwall attracting thousands of visitors every summer.

Whitest sand beaches in the UK

Tripadvisor user ‘mightybiffa’, who recently visited Kynance Cove said: “An absolute must if you are visiting the area. This cove is a National Trust site and is well served with a large car park above the cove and a choice of routes dependent on tide tables and your physical condition. The beach itself is only fully accessible at low tide but the cafe is worth a visit at any time. The scenery itself is stunning and memorable.”

Another visitor, ‘JY-and-PT’, explained: “Out of this world. If you are near Kynance Cove it is a must to go and visit, a stunning and very beautiful place.”

A recent study by LuxuryHotel.com analysed Instagram hashtag data and revealed the UK’s most picturesque beaches.

The research found that Kynance Cove, in Mount’s Bay, Cornwall, is the most Instagrammable beach. Visitors have used over 54,800 hashtags on Instagram while sharing pictures of the spot.

In second place is Brighton Beach, one of the UK’s most famous summer spots which accumulates over 913,000 Instagram posts.

Most picturesque beaches in the UK

Finally, research by Businesswaste.co.uk unveiled the cleanest and dirtiest beaches across Britain.

Treyarnon Bay, in Cornwall, is the cleanest beach in the UK making it a top spot to enjoy the warm weather this summer.

The worst beaches in Britain for clean water are St Annes Beach, in Lancashire and Plymouth Hoe East Beach, in Devon.

They were followed by Bowleaze Cove, in Dorset, which was also named one of the dirtiest beaches in the UK.

The best beaches in Britain for clean water