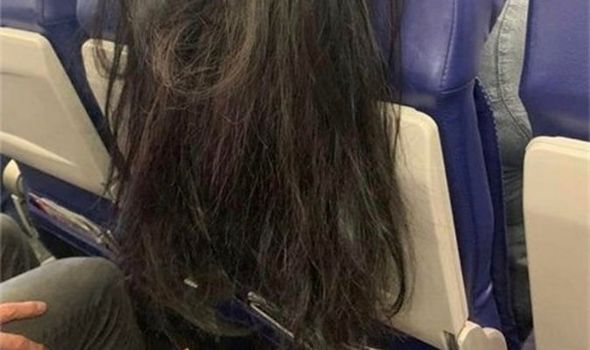 A plane passenger has been called “completely inconsiderate” after hanging her long, dark hair over the back of her seat. The anonymous woman draped her hair over the top of her headrest, completely covering the chair and the other person’s tray table.

A man called Anthony tweeted a picture of the hair and asked his followers: “Would this p**s you off?”

The tweet has gone viral, and thousands of users have shared their opinions.

Most agreed it was “presumptuous” and “incredibly rude”.

One woman said: “Immediate call to the flight attendant so they can explain to the person exactly what portion of the plane their ticket purchased. It did not pay for my tray table.”

Another woman added: “I would quietly lower the tray, let her hair fall in and then close it up again. Yes. It would p**s me off and I would tell her to keep it in her seat.”

A third replied: “Completely inconsiderate and unnecessary. Saying this as a fellow long hair haver.”

However, one man said he wouldn’t be that bothered. He said: “If I needed the tray I would just let her know I need to get under her hair for a sec. But why would I get mad? Flight over soon, on my merry way.”

Another also defended the woman saying: “Would definitely be annoying, but for people with long hair I understand why they do it, not sure what a compromise would be, as long as they understand I might need to move or manipulate it sometimes we could reach an understanding.”

Many people used the opportunity to rant about other types of “rude behaviour” on planes.

Several users had photographs from previous trips where passengers behind them had put a foot on their armrest.

Others complained about people in front of them reclining their seats all the way back.