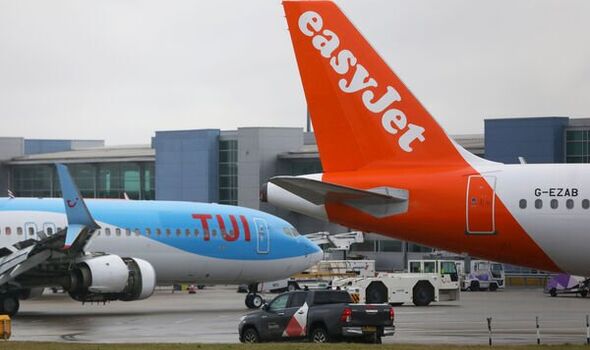 EasyJet announced it was cancelling more than 200 flights from Gatwick – about 24 a day – from yesterday morning until June 6.

The airline said the short-notice cancellations were necessary “to provide reliable services over this busy period”.

TUI announced a “small number” of flight cancellations due to “various operational and supply chain issues”. Three flights from Birmingham, two from Gatwick and one from Manchester were affected.

It came after about 30,000 passengers were left stranded for hours at Gatwick, Bristol and Manchester on Friday due to staffing shortages and computer failures, following another 200 flights being cancelled by EasyJet on Thursday.

Hundreds of passengers were forced to sleep on the airport floor at Gatwick, with officials unable to find them hotel accommodation after their flights were cancelled.

Passengers complained of long queues to drop off bags at Manchester Airport yesterday, describing the waits as “disgraceful”.

TUI passengers flying from the airport’s Terminal 2 yesterday said they faced hours of waiting to drop off luggage before being able to queue for security.

National Highways warned the roads in Kent were “extremely busy” yesterday owing to an “exceptionally high number” of travellers heading to the port of Dover to board cross-Channel ferries. P&O Ferries is still not running all of its sailings.

About 750 lorries were queuing yesterday morning, with tourists being given priority.

The port advised passengers to “pack adequate supplies including food and water” as it is expecting “a very busy week ahead”. There were also long queues at London’s St Pancras station to board Eurostar trains to France, with families heading to Disneyland Paris and football fans going to Paris for the Champions League final.

The RAC expected 18 million people to take to the roads this weekend but warned motorists to prepare for worse traffic congestion from Wednesday as millions head away for the four-day weekend celebrating the Queen’s Platinum Jubilee.

Next Sunday is set to be the worst day, both behind the wheel and at airport passport controls, with millions dashing home before they return to work and school.

RAC spokesman Simon Williams said: “A rare double day off could give a double-whammy of traffic for the Jubilee. It’s the first four-day summer weekend since 2012 and people want to make the most of it.

“Wednesday afternoon and evening is expected to be busy, with a condensed rush to get away. Thursday and Friday will be popular for day trips, and Saturday afternoon and Sunday morning will see high numbers of people returning from both a week away and a long weekend away.”

The western side of the M25, the A303 at Stonehenge and the M5 in Somerset are set to see some of the worst snarl-ups.

Ahead of a summer of rail strikes, engineering works will hit some lines over the Jubilee weekend, stalling people travelling to special events.

People heading to next Sunday’s Platinum Pageant on The Mall from Kent, East London and Essex were warned of delays and diversions.

Buses will be used between Lewisham and Hayes, while services into Liverpool Street station will be diverted as the roof is replaced.

Buses also replace some trains on Thursday and Friday between Manchester and parts of the North-West.

Up to 28 million people are planning trips over the Jubilee weekend, according to Visit England, which said: “It is a much-needed boost to the tourist industry as the summer season gets underway.”