The coolest coves: We reveal the perfect spots in the UK for a refreshing dip or a lazy picnic for those who fancy getting off the beaten track

Hidden at the bottom of vertiginous cliffs or beneath a sweep of high mountains, coves offer the perfect escape for adventurous travellers keen for a coastal getaway without the crowds.

Whether it’s a brief dip or a languorous picnic on the beach, these are the places I head to when I need a deep, soothing breath of sea air with just my family for company.

From distant Welsh gems to easily overlooked wonders on the Essex coast, these are our most beautiful secret coves. 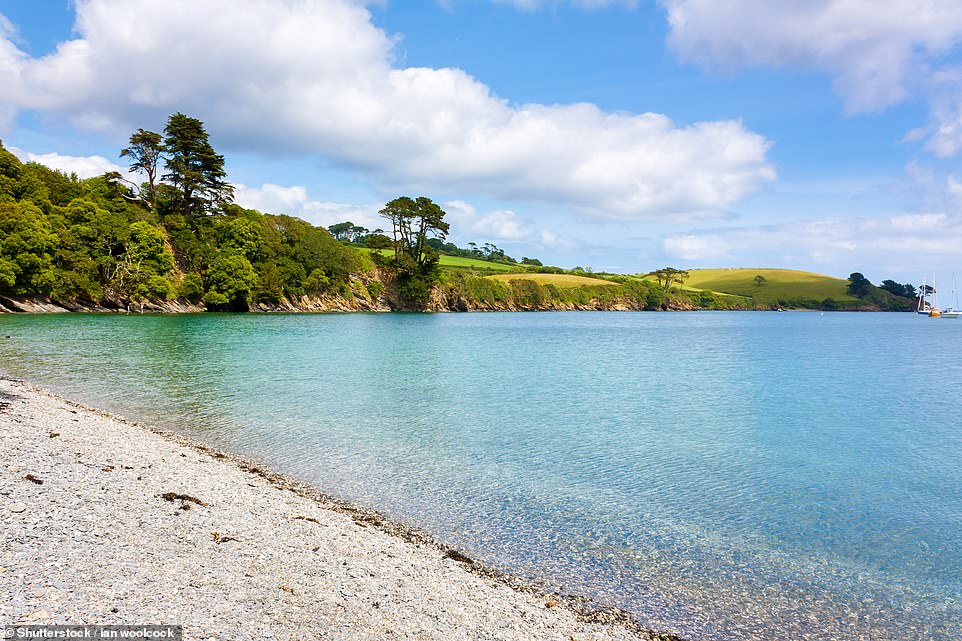 Set on the beautiful Helford Passage, a short walk through the woods east of the pretty hamlet of Durgan, Grebe Beach is a Cornish delight.

Lush banks, replete with Scots pine and oak tumbling down from the low cliffs, and sweeping views out to the Atlantic give this hidden beach a surprisingly tropical feel.

The late naturalist Roger Deakin said swimming here was akin to breast-stroking through the Limpopo, and it’s easy to see why. Well back from the swell of the Atlantic, the water here is calm and perfect for a languid dip on a hot afternoon.

Stay: National Trust-owned Quay Cottage in Durgan, overlooking the Helford River, is available for a minimum of two nights from £329 (nationaltrust.org.uk).

This tranquil spot on Essex’s hugely underrated Mersea Island is a dream for beachcombers, sandcastle-builders and children.

On the eastern side of the island, close to Clacton-on-Sea, the beach is crossed by boardwalks and tiny creeks that appear at low tide.

Pack a net and bucket and search for oysters, or pop up a windbreak and enjoy the peace this corner of England has to offer. Make sure to join the queue for Company Shed, which serves oysters and fresh fish. 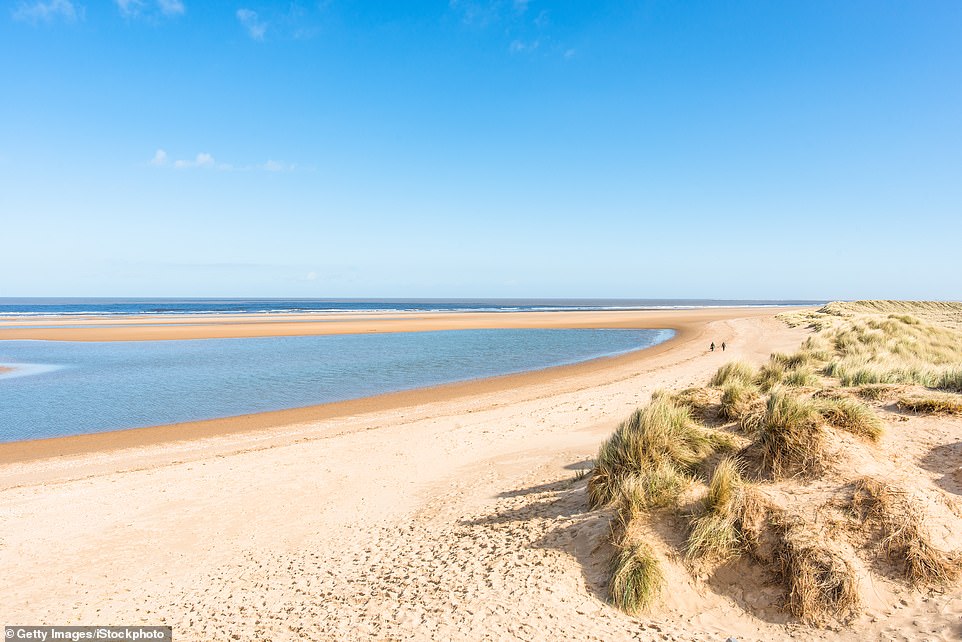 Burnham Overy Staithe in Norfolk, where you can spot marsh harriers and seals

More of a creek than a cove but no less beautiful for it, this place is a boaters’ paradise. The long tidal range means small vessels which dot the harbour spend much of their time listing on dry mud, but the winding path that cleaves to the creek and heads over the dunes and on to Holkham beach means it’s easy to reach open water by foot if sailing isn’t your thing.

Pack binoculars – marsh harriers swoop across the vast open expanses, as do lapwings, while common and grey seals can often be spotted in the water.

Stay: The Hero, with B&B from £155 a night (theheroburnhamovery.co.uk). 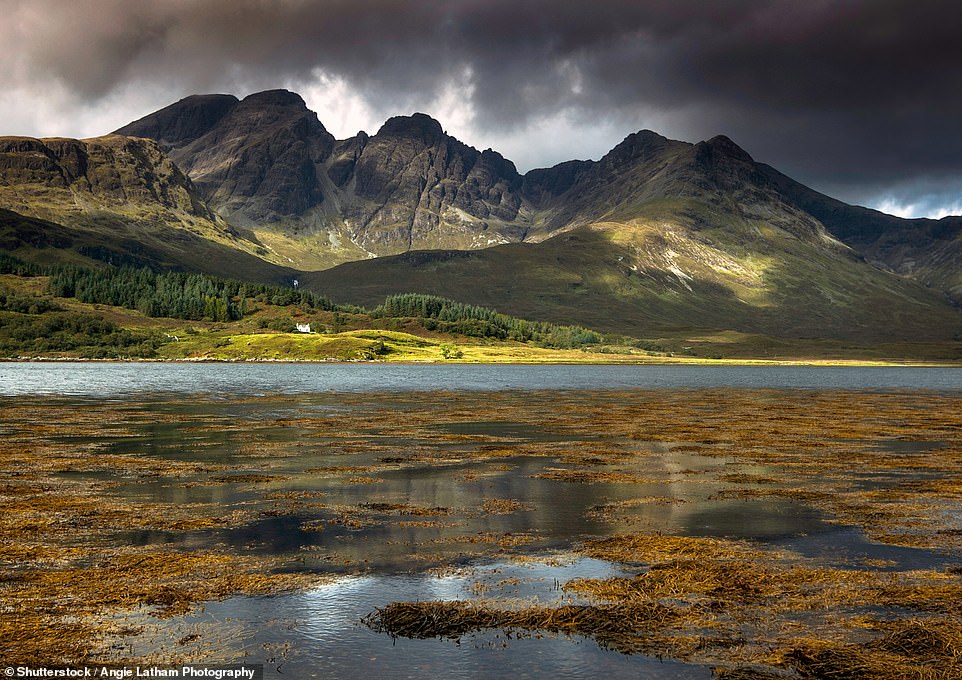 Just north of Torrin, a mountain stream flows out into the eastern reaches of Skye’s spectacular Loch Slapin.

The small beach is loomed over by Beinn na Caillich to the east and Bla Bheinn across the water to the west, with handy parking for those who want to camp or explore the nearby Torrin pools.

The latter are a less crowded and equally beautiful alternative to the wildly popular and frequently overrun pools at Glenbrittle. This is a place to come and feel the vastness of the Scottish countryside, with otters frolicking in the shallows. 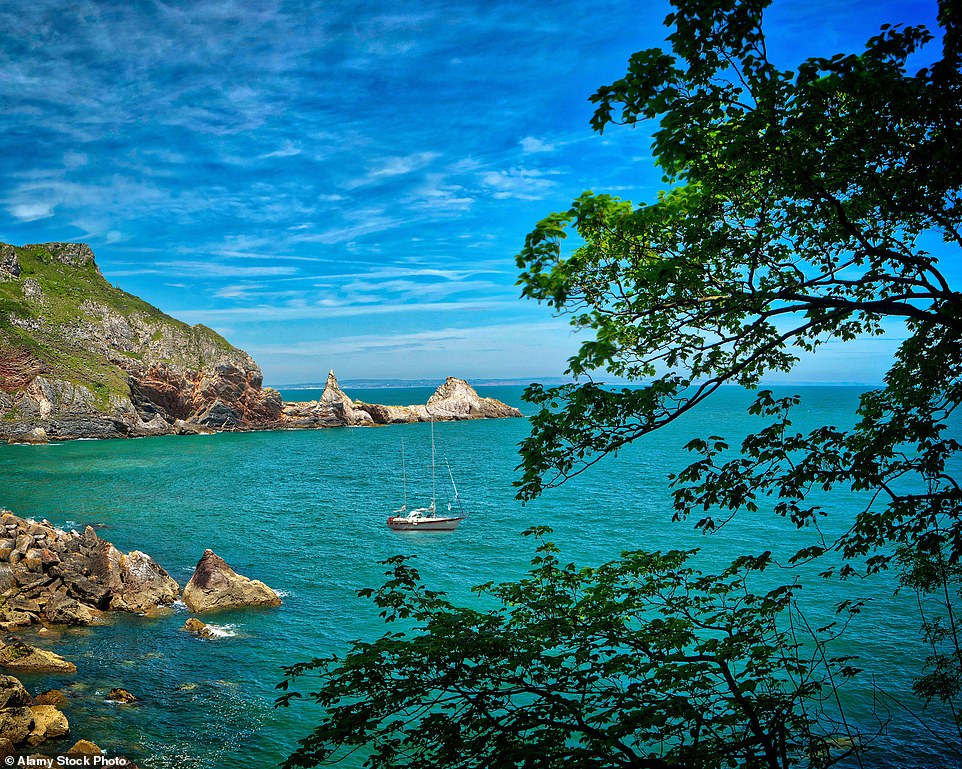 Hideaways: Anstey’s Cove in Devon is reached after a trek through woodland

Just off the South West Coast Path between Torquay and Babbacombe, this is one of the English Riviera’s finest beaches. Sure it’s shingle rather than sand, but that hardly matters when the water glitters in the summer sun and you’re kicking back in a rented deckchair while enjoying an ice cream from the beachside cafe.

The walk here is spectacular, too, downhill through woodland. This is a beach that rewards those who make a bit more effort when it comes to finding a place to lounge.

Named after a deep rockpool which appears on the beach at low tide, Blue Pool Bay is arguably the most picturesque of Gower’s beaches. Accessible via a steep footpath or from Broughton beach when the tide is out, the sea here is dramatic, the views of the cliffs making it worth pulling on your walking boots for. The Blue Pool is popular with swimmers but caution is advised, especially when the tide is rising. Likewise, riptides make bathing in the sea dangerous.

The cove disappears at high tide, so check tide times before setting out.

Known by locals as Cable Bay, after the telephone cables that ran from here to the opposite shore in Ireland, Porth Trecastell is a perfect, sheltered cove and one of the finest in Wales.

It’s popular with families, with ample sand for playing and excellent rockpooling, and surfers and kayakers will also find much to love here thanks to swells from the Irish Sea. Rock climbers will be in their element when low tide reveals excellent routes up the cliff faces.

Take a wander along the western headland on the Anglesey Coast Path and explore the Neolithic burial chamber of Barclodiad y Gawres. 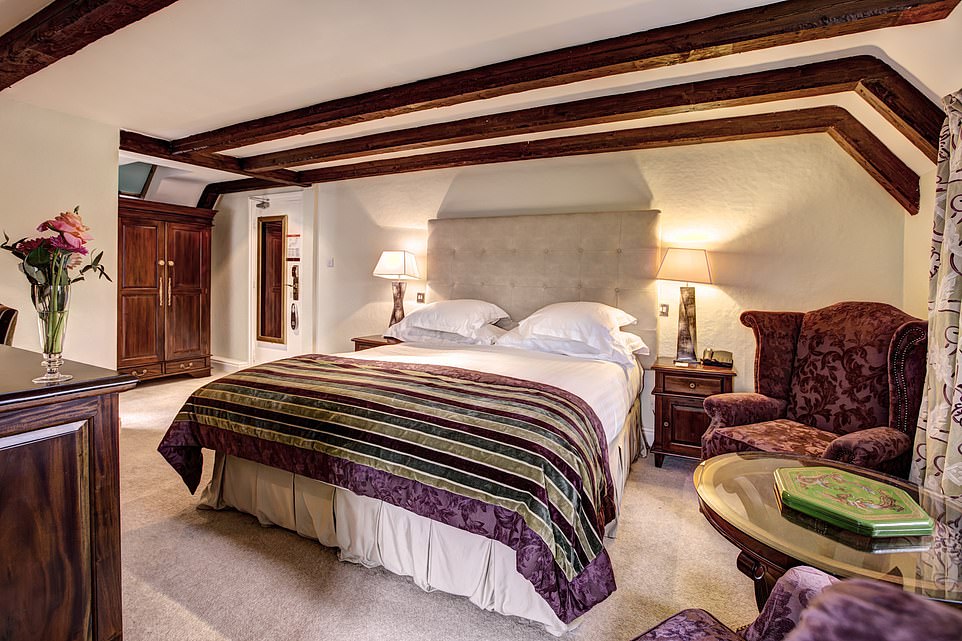 At the northerly tip of the Islandmagee peninsula in County Antrim, Browns Bay Beach, tucked around a headland and away from the churning waves of the Irish Sea, is a dream spot for swimmers. The waves here don’t tend to get too big and the water quality is excellent, meaning that keen dippers will find much to love.

For those who’d rather stay on dry land, the remote location and views along the coast make it perfect for a short walk. Dogs are allowed, too, with a handy car park making it easily accessible. 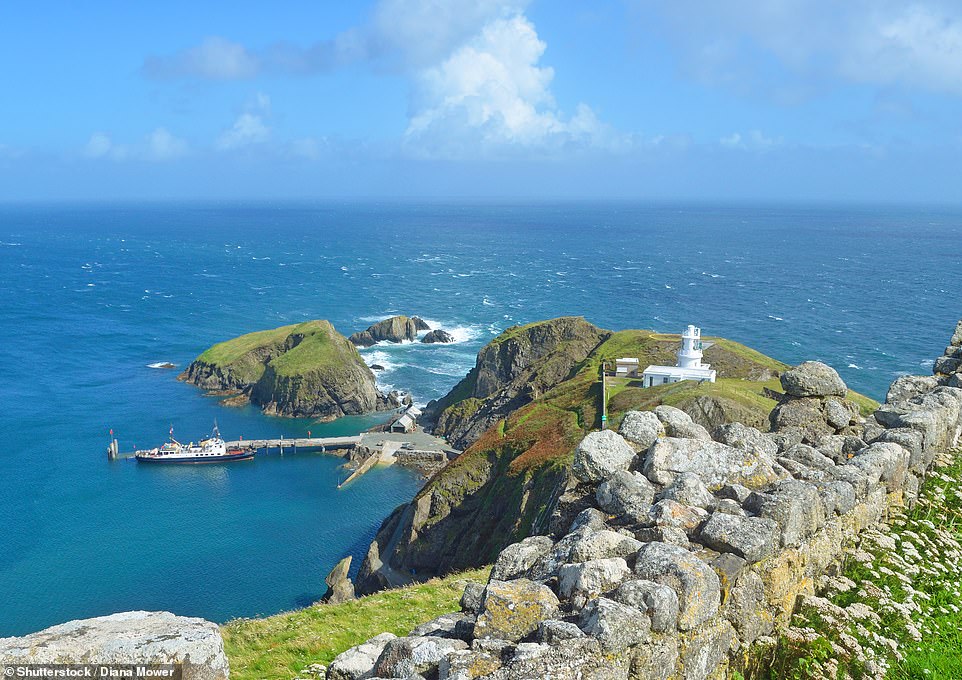 Sail to Lundy from Ilfracombe or Bideford in North Devon between April and October and explore some of the UK’s most wild and rugged coastline. Jenny’s Cove, on the island’s north-west coast, named after a merchant ship carrying gold dust and ivory that was wrecked here in 1797, is its most fascinating beach.

Overlooked by coastal defences thought to have been built to protect against piracy, the cove and its surrounding cliffs are now home to a puffin colony, as well as to razorbills and guillemots.

A remote beach on the western side of the Rhins of Galloway peninsula, Ardwell Bay faces directly out on to the Irish Sea, with Northern Ireland on the horizon.

Those who venture this far west are rewarded with solitude and a chance to explore the region’s ancient history at Doon Castle Broch, a clifftop fortress said to date back some 4,000 years to the Iron Age.

It’s not uncommon for dolphins to surf on the waves that pile into the sandy bay. Seals are also easy to spot, along with myriad wading birds. 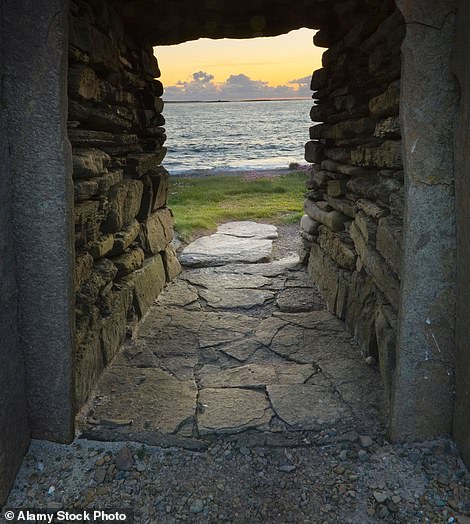 Remote: Part of a preserved Neolithic farmstead on a small island in Orkney

Stay: The spectacular Knockinaam Lodge has rooms from £205 a night (knockinaamlodge.com).

Tiny Papa Westray is accessible by the world’s shortest flight – the hop from neighbouring Westray takes just a minute and a half.

Once on this tiny island, the beautiful Bay of Moclett ticks all the boxes for beach-lovers – a sweep of fine white sand with sparkling azure water in summer.

Walkers can undertake a circuit of the entire island, including a visit to the oldest standing house in Northern Europe and St Boniface Kirk, one of only two Orkney churches that survived the Reformation and are still in use.

And visit the Knap of Howar, a preserved Neolithic farmstead.

Where the River Blyth winds its way towards the North Sea at Walberswick lies some of the East of England’s finest marshland. Its southern shores enjoy right to roam access, meaning you can ramble out to the water’s edge where numerous channels, creeks and coves appear between the reeds.

Pack binoculars as the land here is part of the wider Walberswick National Nature Reserve. Loomed over by Blythburgh church, also known as the Cathedral of the Marshes, this is a place ripe for exploration on colder days.

Stay: The Anchor at Walberswick has B&B from £100 a night (anchoratwalberswick.com).