Inside the ‘palace-rated’ hotel in Paris that’s had a £177MILLION revamp – and discovering it was money well spent (well who doesn’t like a one-ton marble bath in their bedroom?)

‘There’s something about the sight of a white-tuxedoed barman serving drinks that gladdens the heart.’

So writes my chum in response to a picture I WhatsApp him of where I’m sitting – the gloriously frescoed Le Bar Josephine at Hotel Lutetia in Paris.

As the dapper chap hands me a splendid glass of Cotes de Provence Chateau Minuty rose, I consider his comment, and find that I absolutely concur. 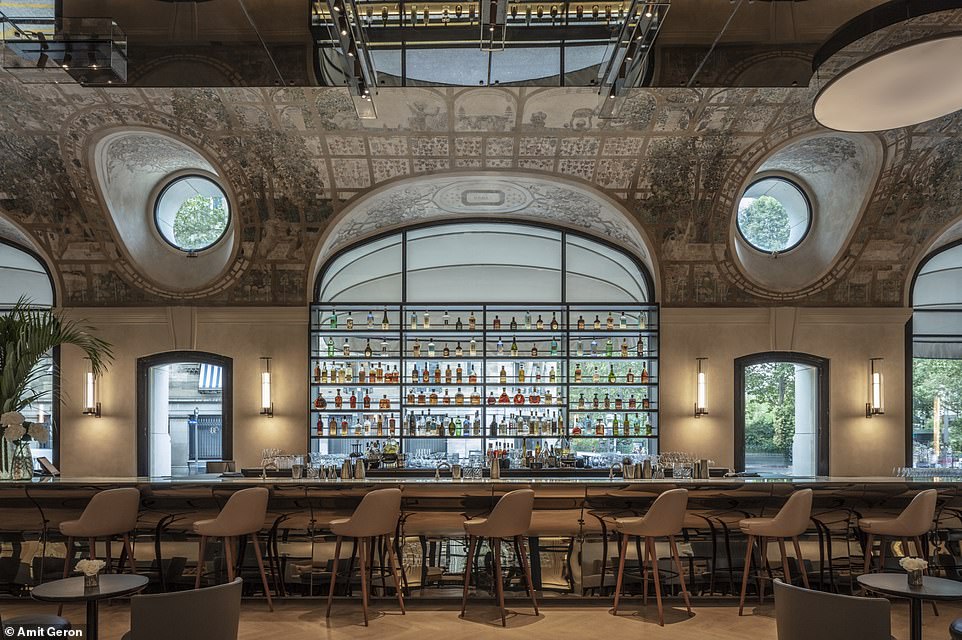 Sante! The gloriously frescoed Le Bar Josephine at Hotel Lutetia in Paris, which underwent a 200-million-euro (£177million) revamp in 2019

But this is not an isolated incident – every aspect of the Lutetia gladdens said heart.

Of course, the hotel underwent a 200-million-euro (£177million) revamp in 2019 and carries the prestigious ‘palace’ rating from the French Government, so its excellence doesn’t come as a surprise.

It’s a hotel that oozes class throughout – and, for bonus points, has a fascinating history.

The name is a nod to the Roman city of Lutetia, Paris’s predecessor, which was centred near the hotel’s location in the chic Saint-Germain-des-Pres neighbourhood.

One of the star attractions of this area is Le Bon Marché – the first modern department store. 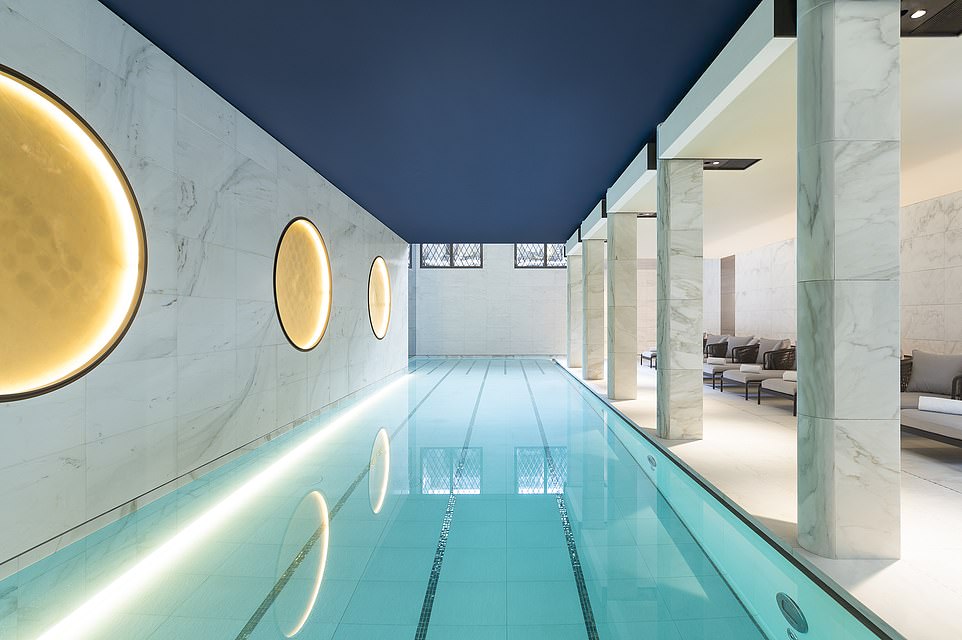 ‘The subterranean spa is truly magnificent,’ writes Ted, ‘like stepping into a Roman emperor’s bathing house’

It was originally a novelty shop called Au Bon Marché, which opened in 1838, but it was transformed by Aristide Boucicaut and his wife, Marguerite, in 1852 into a store that would change how Parisians – and then the world – shopped.

In 1907, the board of Le Bon Marché turned its attention to hoteliery and decided to open a luxury hotel directly across from its famous store.

After all, it reasoned, it would be perfect for lodging customers and suppliers.

Hotel Lutetia was born. And it went on to become just as legendary as its department store sibling.

Charles and Yvonne de Gaulle chose it for their wedding night on April 7, 1921, and Nikita Khrushchev, George Pompidou, François Mitterrand and Jacques Chirac have all held meetings here.

When the hotel shut its doors in 2014 for the revamp it contained no less than 280 listed artworks.

To me, the hotel itself is a work of art – and luxurious down to the finest detail. 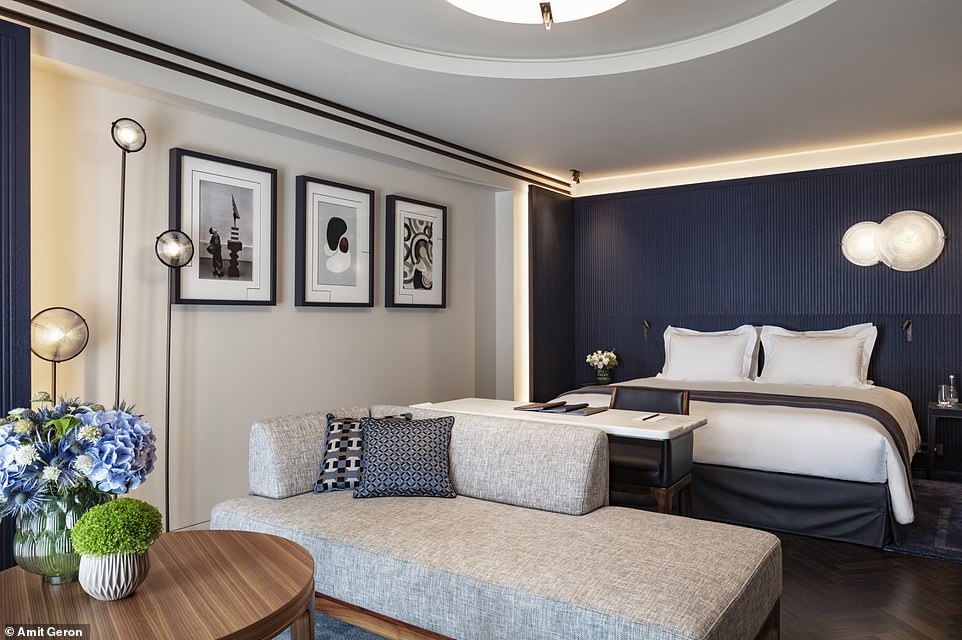 Breathtaking features abound, with perhaps the most striking being the marble bathrooms, which can be found in all 184 rooms.

This is a hotel singularly dedicated to wanton finery.

We’re in a junior suite and after hauling our jaws up from the floor following a sweep of the be-marbled bathroom (with toiletries by Hermès, naturally) we discover that we also love the view of the Eiffel Tower, the liberal use of elegant blue Eucalyptus wood for statement panelling, doors and draws, the eye-catching split-level floor-standing Art Deco lights, the beautiful chaise longue and the wonderfully comfortable king-size bed. 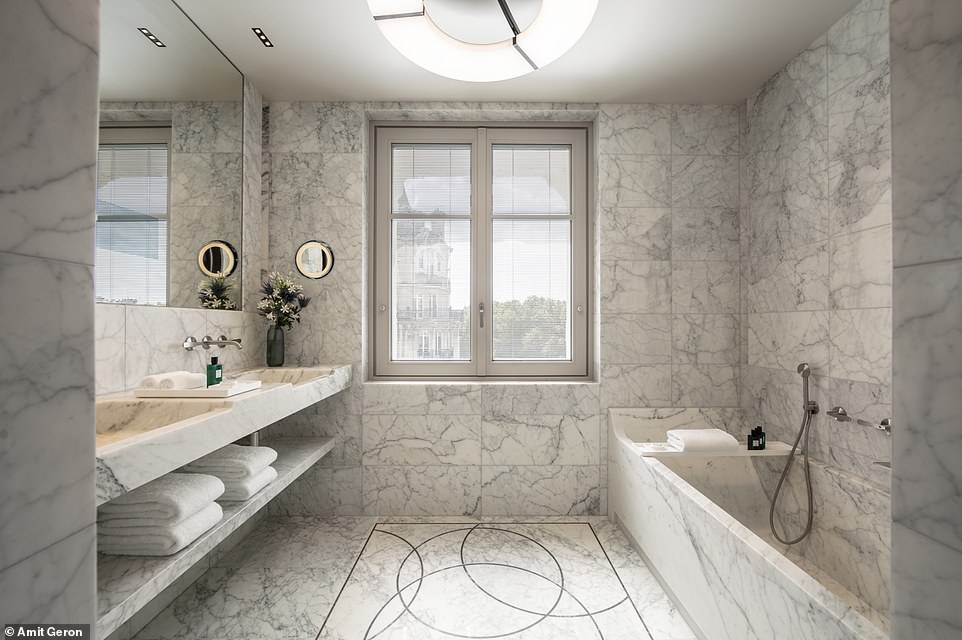 Every bedroom in Hotel Lutetia features an all-marble bathroom, complete with a one-ton marble bath 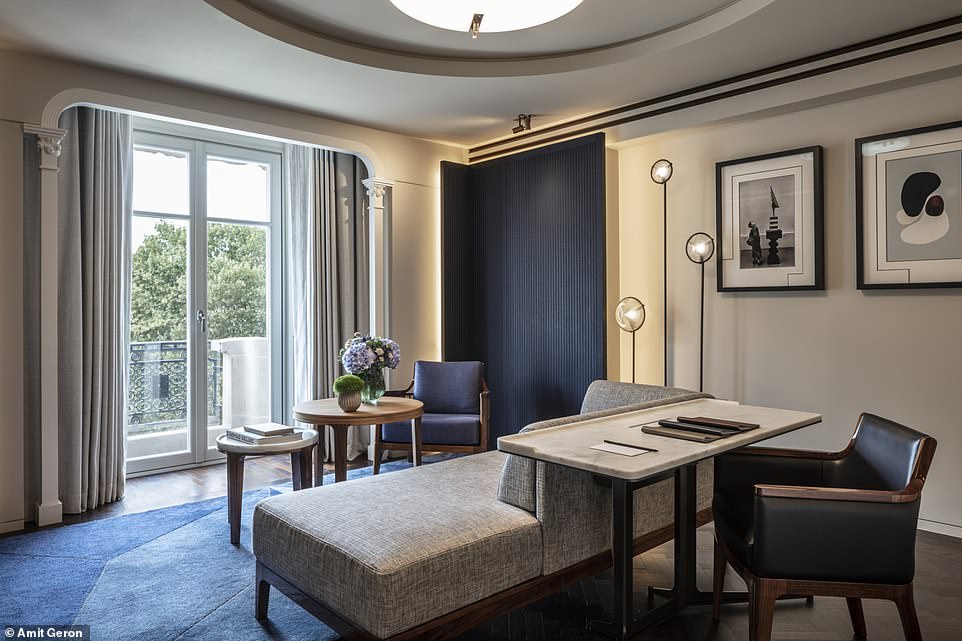 A window-facing view of Ted’s junior suite, which affords him views of the Eiffel Tower 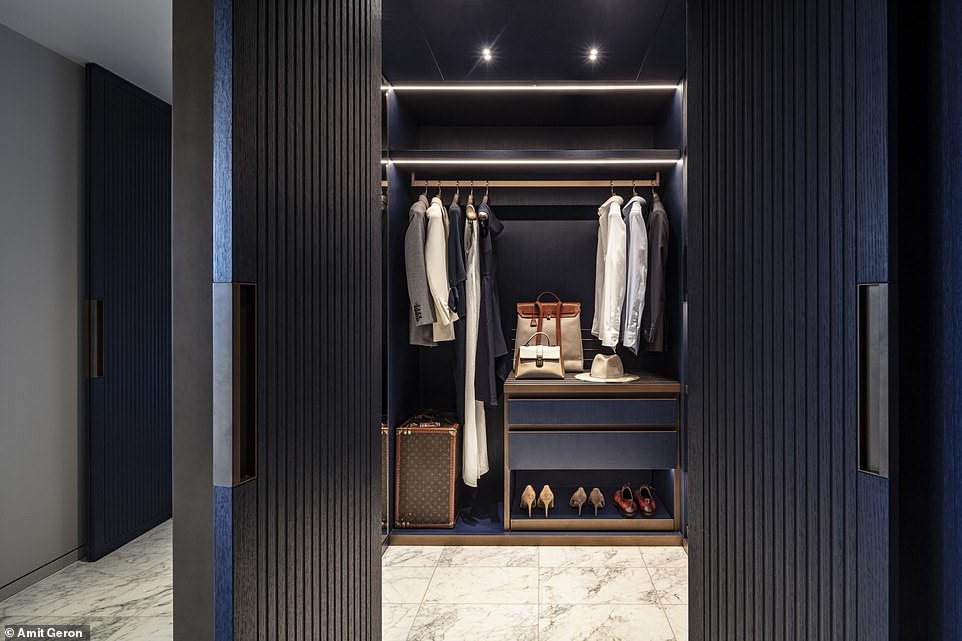 Ted says of his room, pictured: ‘[I love] the liberal use of elegant blue Eucalyptus wood for statement panelling, doors and draws’

Every element in the room, and in fact throughout the hotel, works in perfect harmony to create a wonder-world of refinement.

Each area is ripe for a magazine cover shoot.

Even the corridors, which are beautiful.

They’re covered in varnished wood with a mirror finish and brown and cream carpets.

Jean-Michel Wilmotte, the architect in charge of the renovations, said: ‘We carried through a strong wood theme to add warmth to the entire project – 1910 was the time of the big Transatlantic adventures. Our idea was to draw in some of the atmosphere from those big old yachts by using the varnished wood in every circulation pathway.’ 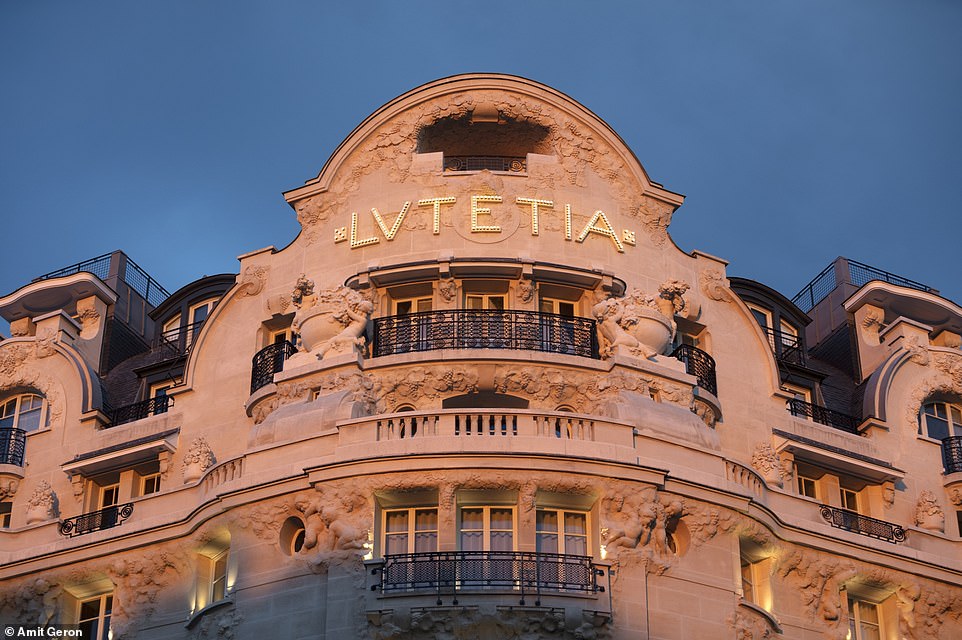 Charles and Yvonne de Gaulle chose Hotel Lutetia for their wedding night on April 7, 1921, and Nikita Khrushchev, George Pompidou, François Mitterrand and Jacques Chirac have all held meetings there

The subterranean spa, meanwhile, is truly magnificent – like stepping into a Roman emperor’s bathing house.

Huge pillars line a 17-metre pool and there’s a great curved plunge pool in a room to the side with mini-waterfalls.

Our evening meal is also Wowsville.

We dine in Lutetia Brasserie, which is overseen by chef Gérald Passédat, owner of three-Michelin-star Le Petit Nice restaurant in Marseille.

He doesn’t cook there – but he does visit regularly I’m told and is the creative force behind the menu.

The seafood is the establishment’s forte.

And for mains, my turbot with meat juice and capers and mash is very good indeed.

The staff exude excitable bonhomie – as do most of the guests. 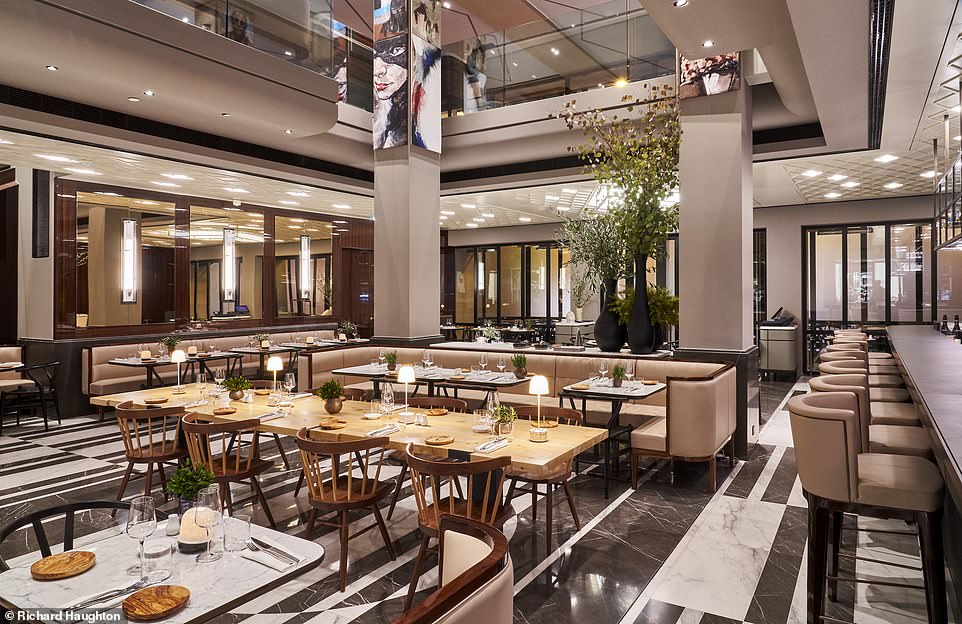 Ted and his family dine in Lutetia Brasserie, pictured, and enjoy an ‘oyster tasting’ platter

Breakfast – in the L’Orangerie – is far more subdued.

The atmosphere is hushed (aside from my two-year-old daughter giving a rousing rendition of Twinkle Twinkle Little Star) as we and our well-heeled fellow guests savour gourmet pain au chocolats and exquisitely cooked Eggs Benedict.

As we leave, the burly security guard in the lobby spots us struggling with our luggage paraphernalia (pram, multiple bags full of toddler toys and so forth) and instantly steps forward to assist.

Then offers to take our photograph on the steps outside after lifting it all into our waiting taxi.

Heart-gladdening to the very end.

Ted was hosted by Hotel Lutetia in February 2020. Rooms cost from £650 per night. Visit www.hotellutetia.com for more information.

Eurostar operates from London St Pancras International to Paris Gare Du Nord, with one-way fares starting from £39 (based on a return journey. All tickets are now flexible, with no exchange fee on changes up to seven days before departure. Fastest London-Paris journey time is 2hr 15 minutes. Tickets are available from www.eurostar.com.

For the latest travel advice for France visit www.gov.uk/foreign-travel-advice/france.