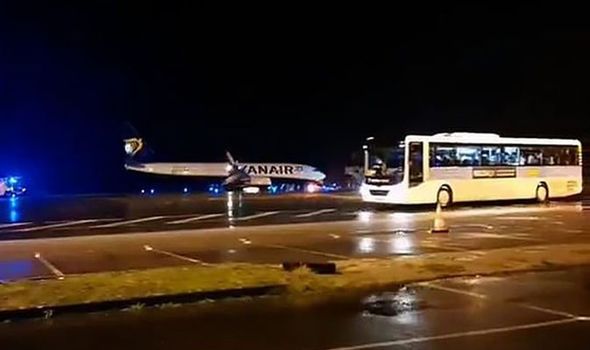 The flight, (FR4052) took off from Manchester airport on its way to Faro, Portugal, shortly after 6.30pm yesterday evening, January 3. It was forced to make an emergency landing in Brest, in western France.

Flight tracking software also suggested that the plane descended rapidly from 41,000ft to 6,725ft in just seven minutes, according to the Manchester Evening News.

It was then pictured on a runway with fire crews in attendance.

Reports have been made of a “fire” on board but this has not yet been confirmed.

The Ryanair operated Boeing 737 aircraft was met on the runway by numerous fire trucks and passengers were reportedly escorted onto a bus by French police.

Current coronavirus restrictions state that travellers arriving in France must self-isolate for 48 hours before taking a PCR test.

News of the Ryanair emergency landing comes shortly after a different flight from Birmingham to Dublin, operated by Aer Lingus, was forced to land in Manchester yesterday evening.

According to Aer Lingus this was due to a “technical issue”.

All customers have also been provided with a hotel stay overnight before continuing their journey to Dublin in the morning.

It is understood fire crews were also on hand to meet the aircraft when it landed at 8.30pm.

An Aer Lingus spokesperson said: “Flight EI277 Birmingham-Dublin diverted to Manchester due to a technical issue.

“All customers have disembarked and will continue their journey to Dublin tomorrow morning.

“Hotel accommodation has been provided. Aer Lingus apologises for any inconvenience caused.”