‘It was out of this world!’: Adventurer Vanessa O’Brien tells MailOnline what it was like to go into space on board Jeff Bezos’s Blue Origin rocket – and reveals her incredible never-before-seen souvenir pictures taken from inside the capsule

A British-American adventurer has revealed what it was like travelling into suborbital space for the first time aboard Jeff Bezos’s Blue Origin rocket-capsule – and has unveiled exclusively to MailOnline Travel her incredible souvenir photos.

Vanessa O’Brien, 57, experienced the ‘final frontier’ this August and never-before-seen images show her floating around the capsule 65 miles up wearing blue nail polish that matches her spacesuit, with the Earth forming an eye-poppingly majestic background.

The investment banker, who swapped her city career to become an explorer 12 years ago and counts summiting Everest and K2 and reaching both poles among her achievements, told MailOnline Travel that the 10-minute 30-second trip was ‘out of this world’ – but that there was a rather uncomfortable moment as she re-entered the Earth’s atmosphere to land. 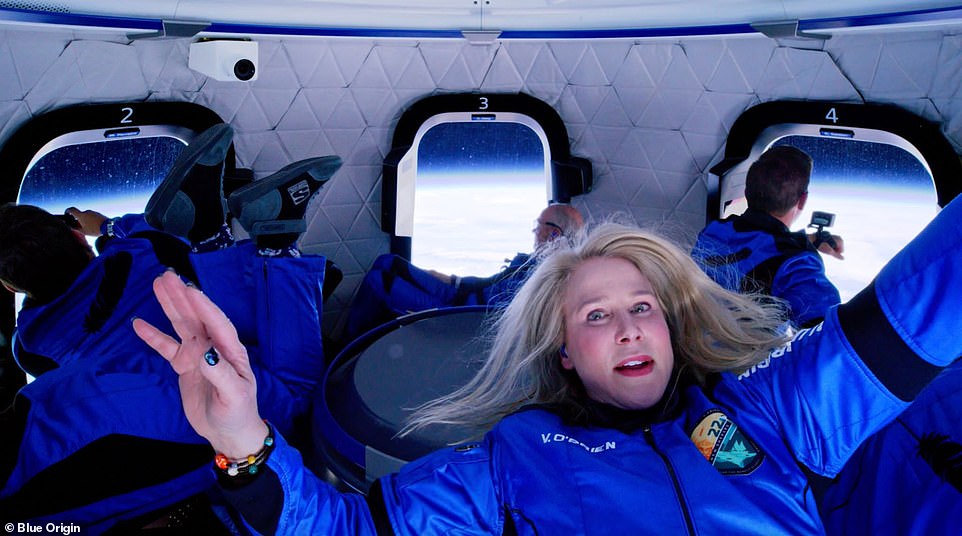 Vanessa O’Brien, 57, went on a Blue Origin flight on August 4, on the company’s sixth crewed mission 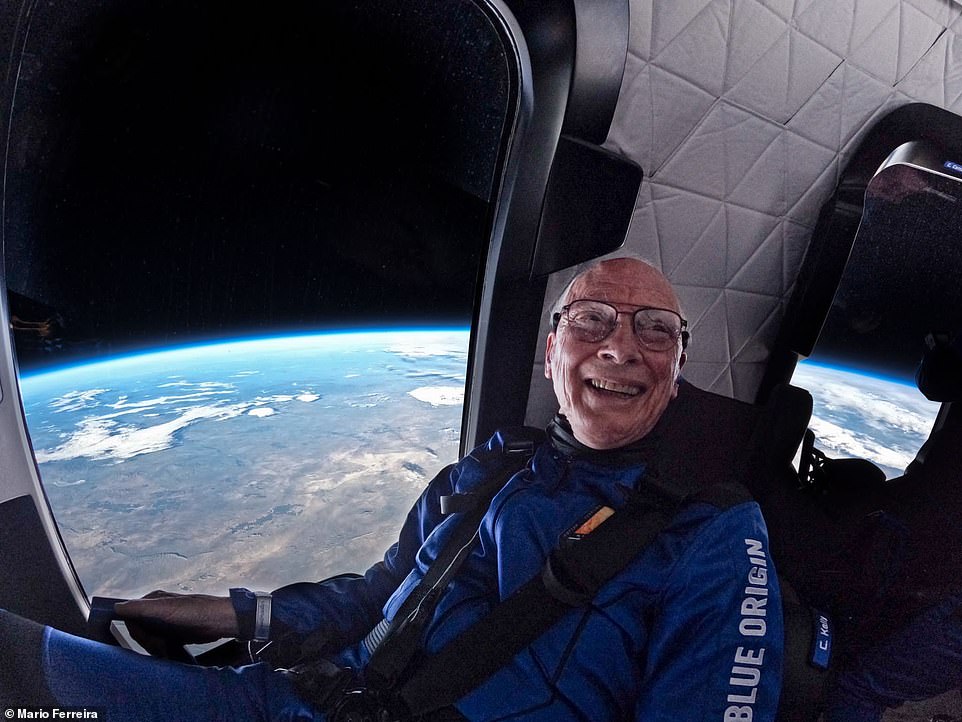 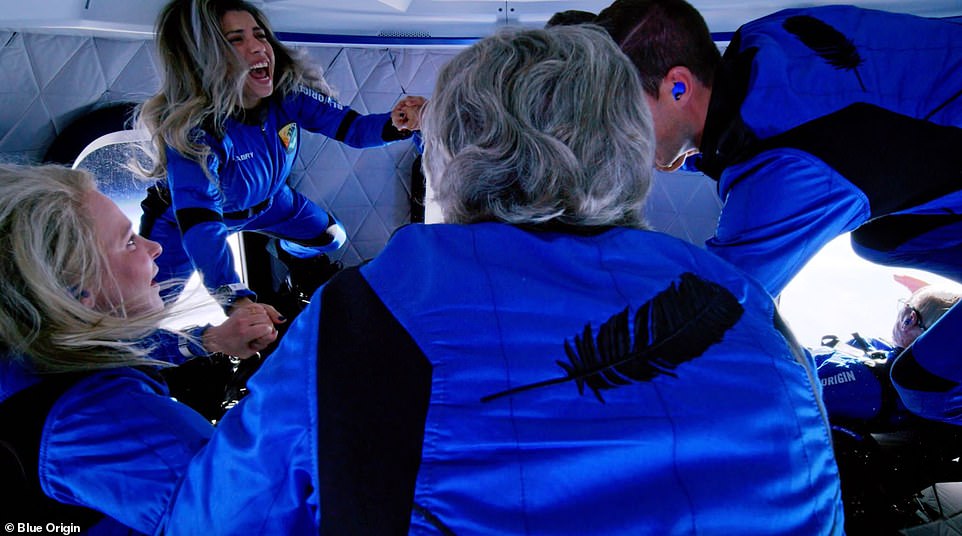 ‘We pulled 5.2 G’s and that amount of force was not something we could have simulated during training. It pushed us back and down into our seats, and we all started sweating.

‘We yelled out to Clint Kelly III, who was the oldest passenger, to make sure he was ok. I have low blood pressure, but I could feel my blood pressure skyrocketing! None of us will ever forget that – but that’s what it took to pierce the Earth’s atmosphere.’

Spaceflight company Blue Origin was founded by Amazon billionaire Jeff Bezos in 2020 and O’Brien was among thousands who signed up for a flight. 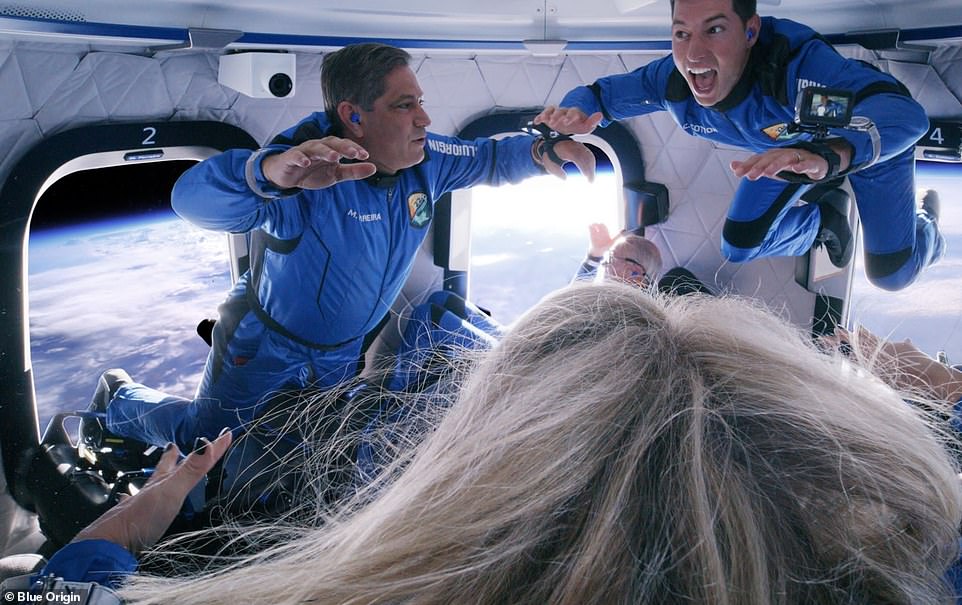 Mario Ferreira, pictured left, made history as the first person of Portuguese decent to go into space 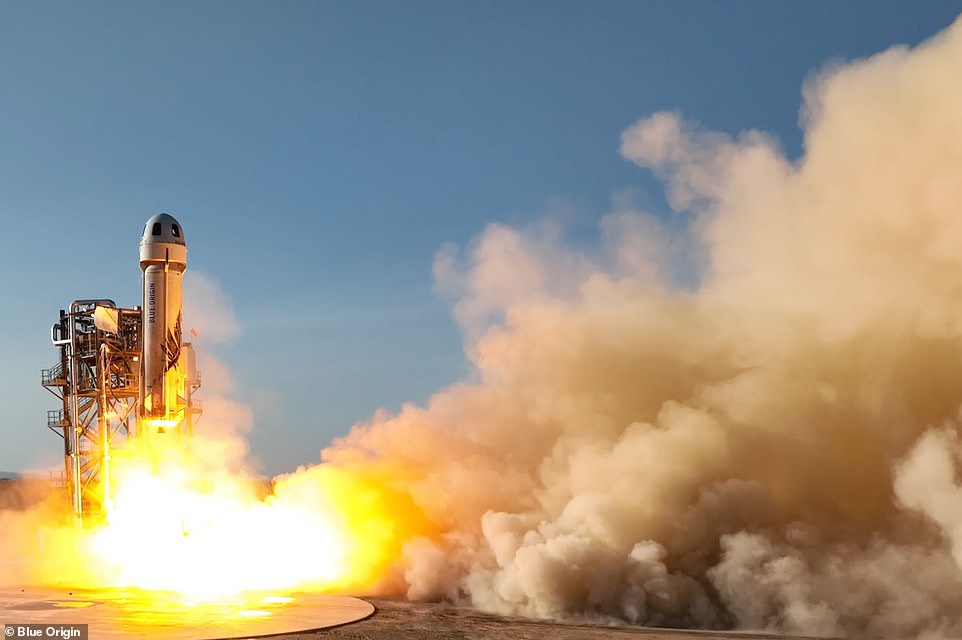 Blue Origin’s first crewed mission was on July 20, 2021, and O’Brien soon found out she had landed a seat on the sixth voyage. Pictured, her rocket launch in motion 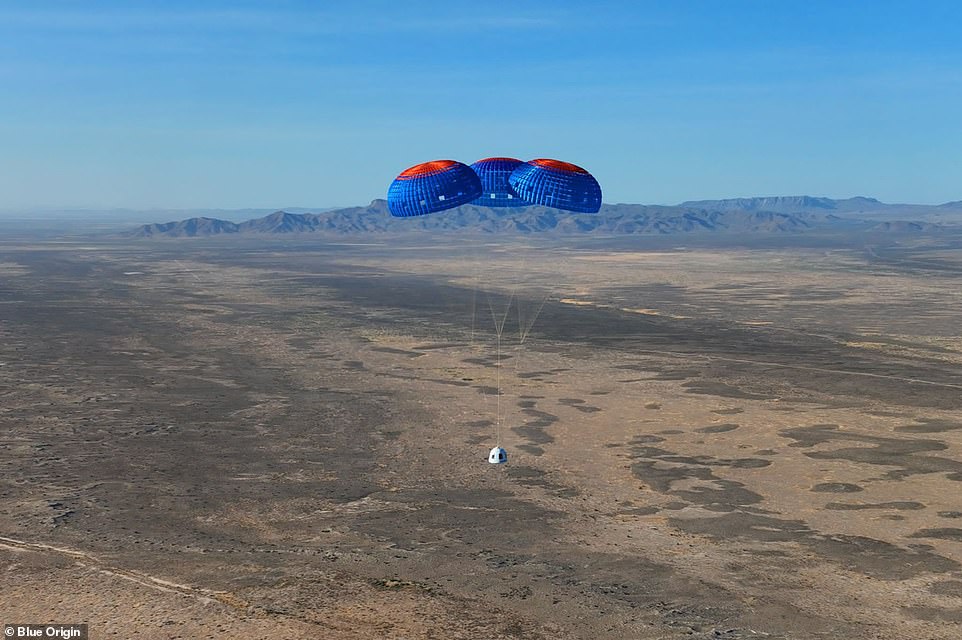 Three red-and-white parachutes shot out of the capsule at eight minutes and 30 seconds, helping the craft glide back to the ground for a soft landing in the Texas desert, retro thrusters ensuring it touched down at about 1mph 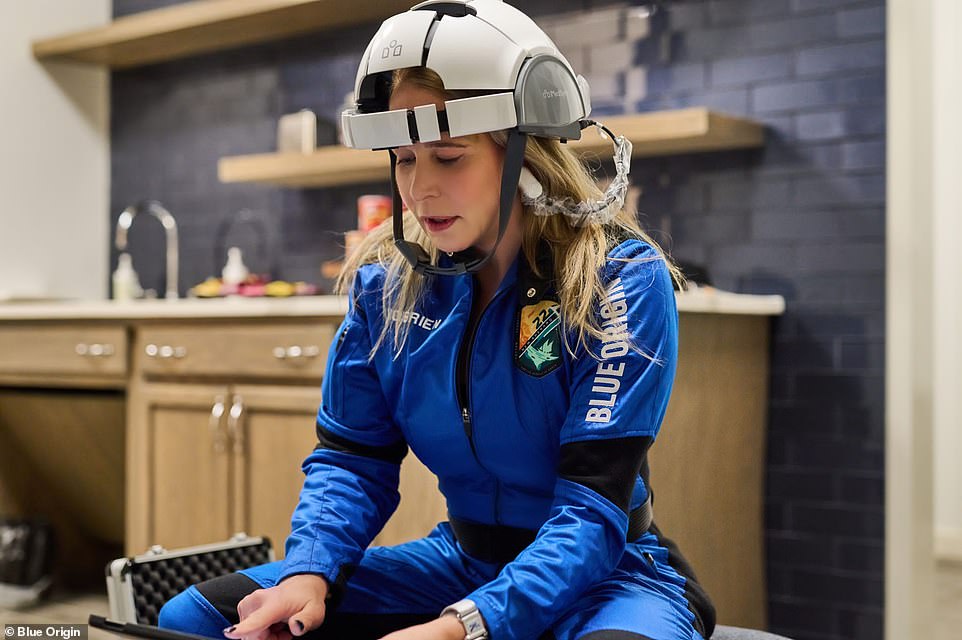 O’Brien is seen wearing a potable MRI by iMediSync of South Korea in an attempt to measure the ‘Overview Effect’ on the brain before and after her space flight. The overview effect is a shift in awareness that many astronauts feel after their trip

Revealing what inspired her to do so, she said: ‘For me, space was the final frontier. I had seen the Earth from the tallest mountains, the north and south poles, and the bottom of the ocean when I visited Challenger Deep [35,843ft], in the Western Pacific Ocean.

‘Each of these places showed signs of climate change and I was even able to help measure these effects – glaciers melting and ocean acidification. However, I was never able to step back and see the Earth’s entirety.’

Blue Origin’s first crewed mission was on July 20, 2021, and O’Brien soon found out she had landed a seat on the sixth voyage.

The adventurer did not disclose how much the voyage cost her, although explained that there were several sponsors involved, including Omega watches, who made it financially viable.

Before her space mission, O’Brien put together a rigorous training plan.

In a bid to experience weightlessness and get used to the feeling, she booked a flight at Kennedy Space Center with company Zero-G.

It uses modified Boeing 727s that allow passengers to experience a weightless environment and ‘float, flip, and soar’ like an astronaut. 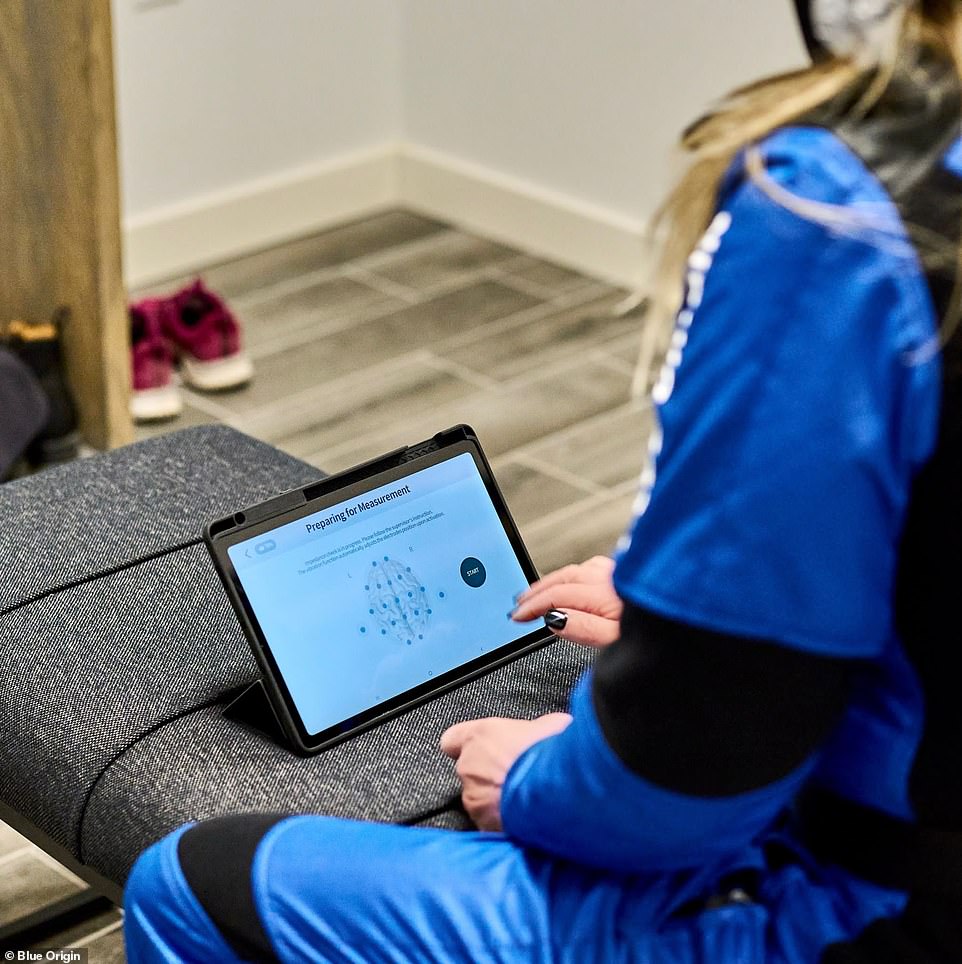 Revealing what inspired her to go to space, O’Brien said: ‘For me, space was the final frontier. I had seen the Earth from the tallest mountains, the north and south poles, and the bottom of the ocean when I visited Challenger Deep [35,843ft], in the Western Pacific Ocean. However, I was never able to step back and see the Earth’s entirety’ 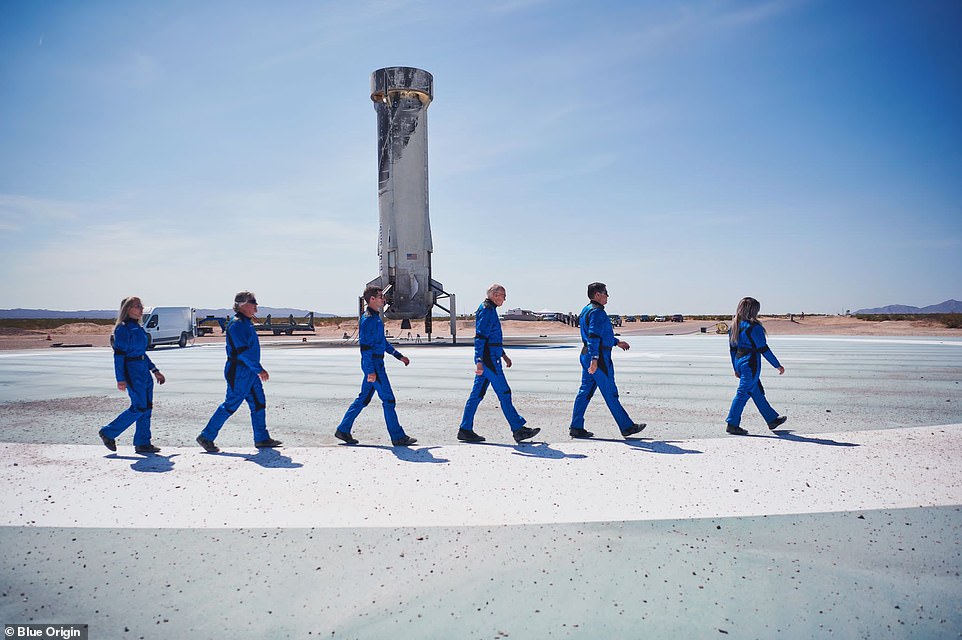 O’Brien with the rest of her crew members (she’s pictured at the back). They nicknamed their team Titanium Feather

Explaining what the Zero-G experience was like, O’Brien said: ‘The process starts level with the horizon at an altitude of 24,000 feet.

‘Gradually, the angle of the aircraft is increased to about 45 degrees relative to the horizon until reaching an altitude of 32,000 feet. During this phase, passengers feel the pull of 1.8 Gs.

‘Next, the plane pushes over the top of the parabolic arc and the zero-gravity phase begins. For the next 20 to 30 seconds, everything in the plane is weightless. Finally, the plane gently pulls out of the manoeuvre, allowing flyers to gradually return to the floor of the aircraft.

‘This first part was entirely separate from my training with Blue Origin. I just wanted to get a sense for what to expect in zero-G prior to arriving on-site in Texas.’

While her Zero-G experience had been an afternoon of fun, she found her Blue Origin training required lots of concentration and very long days.

She explained: ‘Astronaut training is separated into roughly three parts. The first part is inside the capsule, the second is academic, and the third is to familiarize ourselves with the launch site itself, including the launch tower, landing pad, and the Barn, where the rocket is kept.

‘The goal of the training is to get us very familiar with any potentially unfamiliar things – and for all of this to become second nature.

‘We learn about the fundamentals of the reusable rocket, including the propulsion module (also called the booster) and the crew capsule. 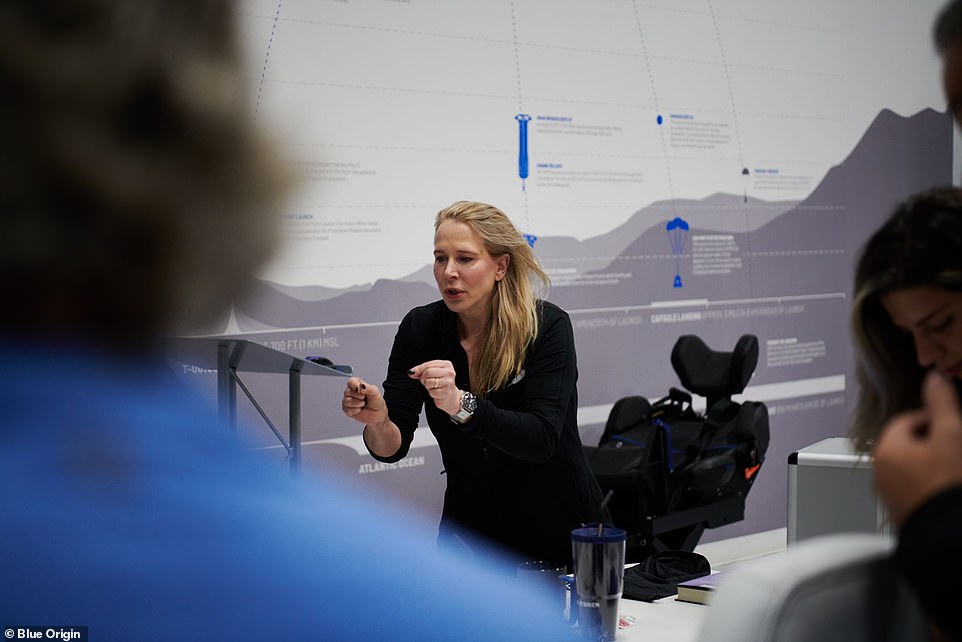 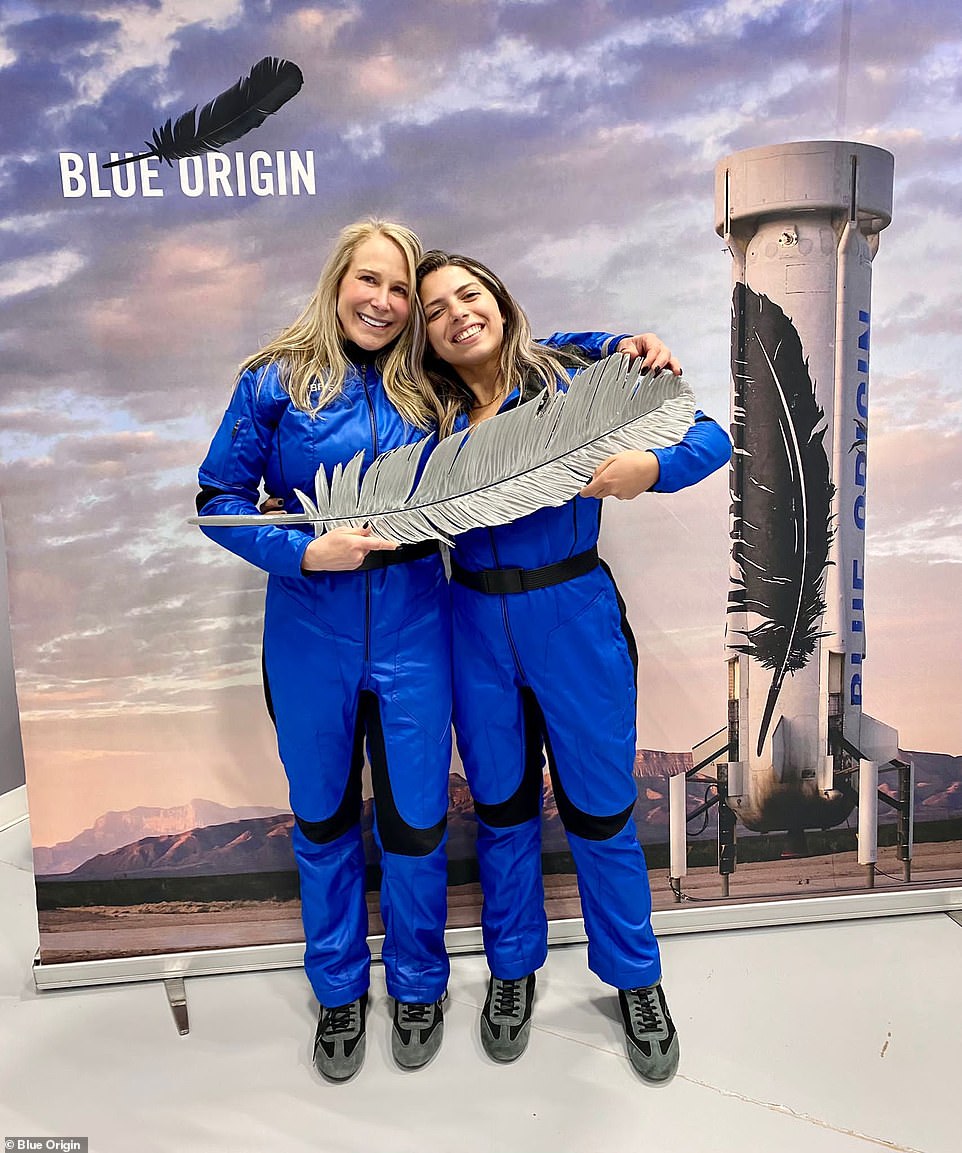 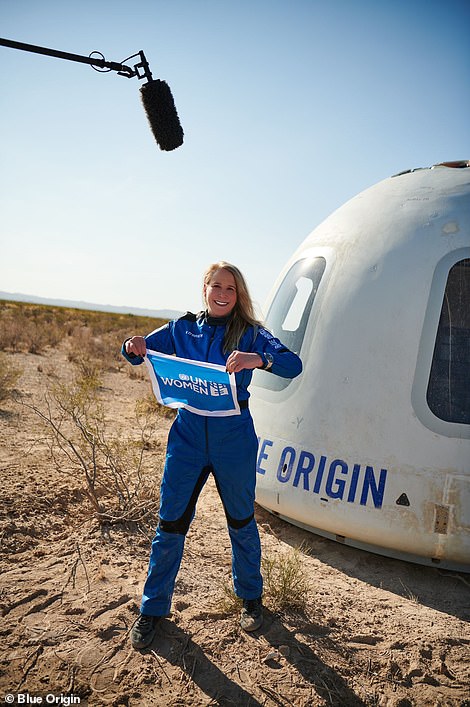 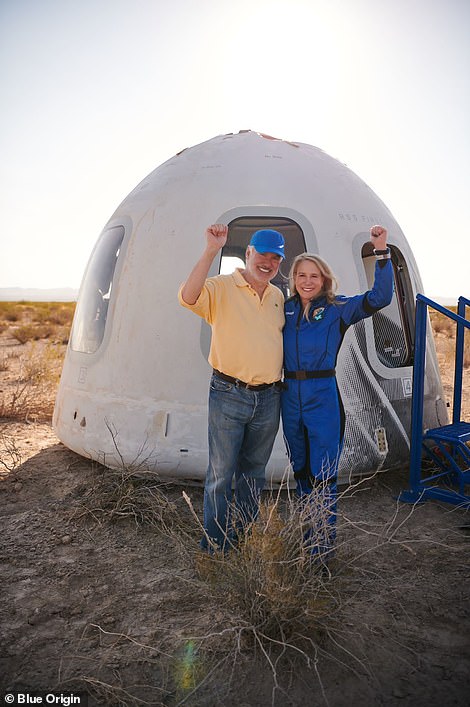 O’Brien strikes a pose outside the capsule that took her to space. Summing up her adventure, O’Brien said: ‘It was out of this world. The views going into suborbital space are truly captivating, watching 180 degrees of that blue marble we call Earth go by. It takes almost one minute to pinch yourself’

‘These are long days. We get up at 4am and get back about 7pm. For space, you need confidence and the ability to be a quick learner/understudy.’

Thankfully O’Brien made the cut and she found herself signed up with five other commercial astronauts for a Blue Origin flight – mission name NS-22 – aboard the reusable New Shepard rocket on August 4.

Along for the epic journey were Sara Sabry and Mario Ferreira, who made history as the first people of Egyptian and Portuguese decent to go into space, Clint Kelly III, a former member of the Defense Advanced Research Projects Agency (Darpa), Steve Young – the former owner of Florida’s largest communications firm – and YouTube star Coby Cotton.

The crew’s launch was delayed for 20 minutes, leaving them anxiously waiting inside the capsule, but when the clock hit ‘zero’ at 9:57am ET, a loud roar was heard echoing through the desert as New Shepard ignited its seven engines. ‘God speed Titanium Feather,’ a member of the Blue Origin command centre proclaimed, referring to the name the crew gave themselves.

New Shepard soared upwards to over 2,000mph. At two minutes and 31 seconds at an altitude of around 250,000 feet (76km/47 miles) the shiny white capsule separated from the rocket, which made a controlled landing at a landing pad about two miles from where it lifted off.

The capsule – which is completely autonomous, every person onboard was a passenger – then continued on to space, around 350,000ft up (106km/65 miles).

The capsule floated for about five minutes before freefalling back to Earth.

Three red-and-white parachutes shot out of the capsule at eight minutes and 30 seconds, helping the craft glide back to the ground for a soft landing in the Texas desert, retro thrusters ensuring it touched down at about 1mph. 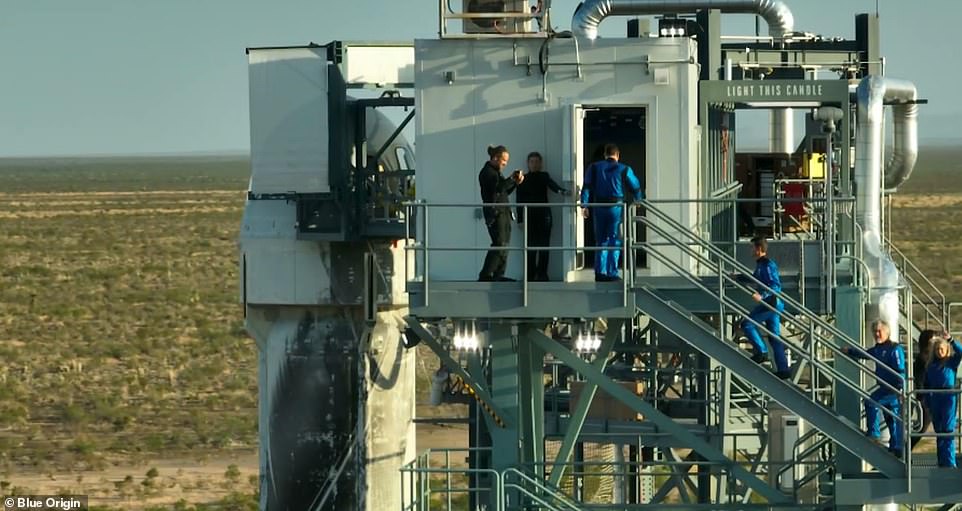 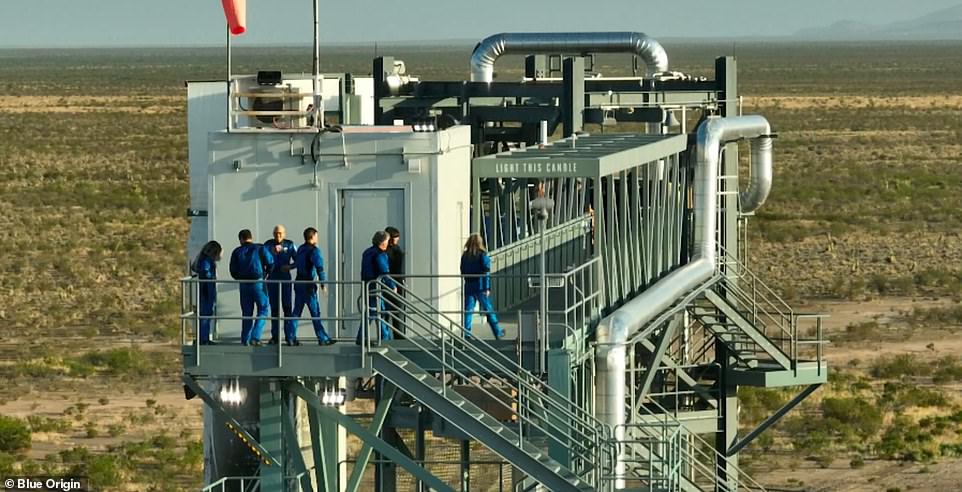 Mission NS-22 brings the total of people flown to space by Blue Origin to 31 since the first one took off in July 2021, with Bezos being the lead passenger

This honour is gained by reaching the highest point on Earth, venturing to the deepest corner of the sea and soaring into space – Victor Vescovo is the only other person to complete all three.

Mission NS-22 brings the total of people flown to space by Blue Origin to 31 since the first one took off in July 2021, with Bezos being the lead passenger.

Summing up her adventure, O’Brien concludes: ‘It was out of this world. The views going into suborbital space are truly captivating, watching 180 degrees of that blue marble we call Earth go by. It takes almost one minute to pinch yourself.

‘Even in pictures, although the Earth is beautiful, you can see how thin the atmosphere is over the Earth. I am left with a sense that the Earth is growing increasingly more fragile, and I am grateful that satellites are being put in place to help monitor climate change.

‘When it comes to my next adventure it won’t be Mars. We have enough work to do here on Earth. We have curable diseases to sort, mysteries left in our oceans, and economies to build while balancing the care of our planet.’

Yesterday the 23rd New Shepard mission failed shortly after lift-off, with the uncrewed capsule, loaded with cargo, jetting away from the faulty rocket before parachuting back to land intact.

Blue Origin’s fleet of New Shepard rockets is grounded until the FAA signs off on the outcome of a company-led investigation into the mishap.