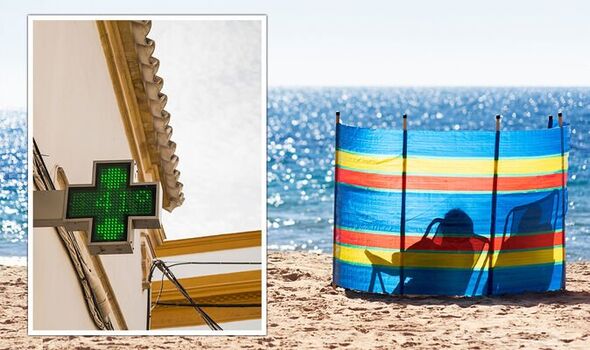 Spain will experience a very “intense” heatwave and extreme temperatures will be reached in June.

Tourists have been warned about the upcoming heatwave as thousands of Britons head to the country every week.

The State Meteorological Agency Aemet said June, July and August will be much warmer than normal.

Ruben Del Campo, from Aemet, explained: “The probability that the next quarter will be warmer than normal is very high.”

The most popular holiday spots, including the Canary Islands, Tenerife, Gran Canaria and Lanzarote, and the Balearic Island, Majorca, Menorca and Ibiza, will be the most affected.

The probability of a much warmer summer in the Canaries, as well as the northwest of Spain, is currently at 70 percent.

Rainfall this month is predicted to be below average.

A heat prevention plan has already been launched in the Canary Islands, as well as a surveillance system for the impact of high temperatures on the health of the population.

Healthcare centres have been put on the alert and a warning has been issued in some specific areas.

British tourists visiting the Canary Islands are advised to check how to protect themselves from the high temperatures. Travellers can visit www.canariasaludable.org to find out more.

“All the hospitals and the Canary Islands Emergency Service (SUC) have staff designated and specially trained to deal with and effectively coordinate the services in the event of a possible heatwave, as well as the established communication channels.”

The alert in the Canary Islands will continue until September 15.

The World Meteorological Organization defines a heatwave as an “unusually warm weather” that persists for “at least two days” with “records above the thresholds”.

In Spain, the Aemet determines that “extreme temperatures must be registered among the five percent of the warmest, affect 10 percent of the [meteorological] stations and last three days at least,” explained Rubén del Campo.

The heatwave beginning this week meets all three conditions.

It will last at least six days, it will affect at least a third of the country and it will exceed 42 degrees.

Temperatures must be exceptionally high compared to the usual average at a measurement point.

The highest temperature in history recorded in Spain was 46.9 degrees, in Cordoba, in the south of Spain.