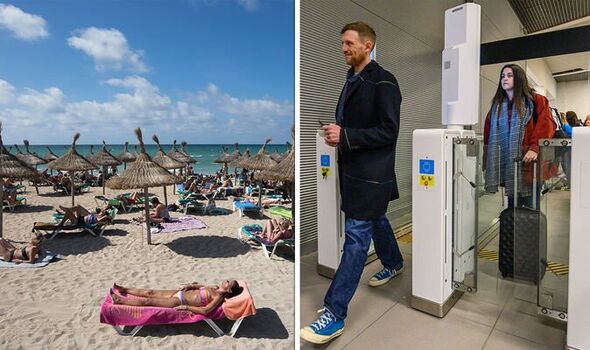 British tourists are currently facing major delays at Spanish airports as, since Brexit, they can no longer use the queues for arrivals from the UK, which has led tourism leaders to question the new system.

Tourism leaders have expressed their concern and said Spain should follow the example of Portugal and allow Britons without having to queue at passport control.

Portugal recently chose to ignore the rules and let British tourists go through controls as before Brexit.

UK holidaymakers travelling to Portugal are now able to use the automatic eGates on arrival, which speeds up the passport control process.

The eGates are now available for Britons in Lisbon, Porto, Faro and Funchal airport (Madeira).

Portugal is the first EU country to give Britons fast-access on arrival.

Now the pressure is growing to allow Britons visiting Spain to pass through passport controls as though they were still part of the European Union.

Director of the Spanish Tourist Office in London, Manuel Butler, told the Spanish newspaper Diaro del Sur that this “will be the first summer season with Brexit and with normalised traveller flows”.

Mr Butler said he valued the measure that Portugal took to facilitate the entry of British tourists and that this would be an important move for Spain as Britons are one of the main groups of tourists visiting the country every year.

However, at the time of writing, UK visitors still have to queue to go through passport control and are not allowed to use the eGates upon arrival in Spain.

Before the Covid pandemic, an average of 18 million UK holidaymakers visited the country annually.

General Director of Costa del Sol Tourism, Antonio Díaz, said: “The British market is vital for us as it is undoubtedly one of our most loyal customers.”

This move comes after hundreds of British holidaymakers saw huge queues at Spanish airports or missed their flight due to the long queues at passport control last week while Irish citizens were getting “preferential treatment” because of their European passports.

The mayor of Marbella, Ángeles Muñoz, urged Britons to come back and visit Spain this summer as they are “essential” for the country.

She said: “To reach the occupation rates we had in 2019, it is vital that the British come back.

“This year British tourists will be able to travel without restrictions so we are confident this will help us to make up for any lack of tourism from other markets.

“The British tourists, along with the national tourists, are our main visitors and we are confident that this summer will be incredibly successful.”

General Director of Tourism of the Marbella City Council, Laura de Arce, added: “It has been two years already with many restrictions in the United Kingdom and we are sure that we will be able to count on them to a greater or lesser extent.

“We are confident that this summer will be quite good, as long as the levels of the pandemic continue as they currently are and the armed conflict has ended.”

The General Director of Tourism also said that the British tourists are “a key market” for Spain.