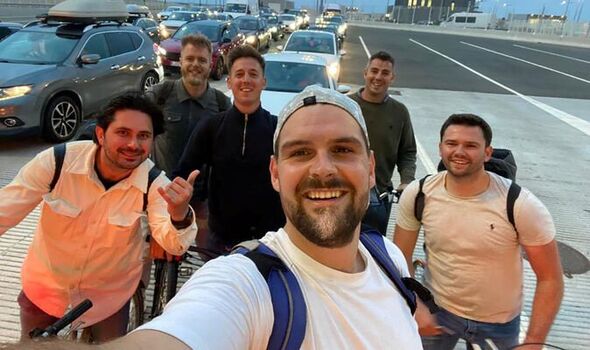 Fourteen friends went to The Netherlands for Alex Sisan’s celebration but were gutted when their flight back to London Gatwick on Saturday was scrapped by easyJet. With options to return by air or rail limited, the party decided the best route was take a train to Calais and board a ferry.

When they rang to ask about the crossing to Dover, the lads were told foot passengers were not allowed – but bikes were – so 13 of the 14 men bought two-wheelers from locals in Brussels and Lille.

The other man convinced a young couple to let him into their car for the crossing, Wales Online reports.

And they all arrived safely in Dover – just 12 hours after their flight had been cancelled.

“At the time it didn’t feel like fun, but I had two of the best days of my life with 13 best friends and this just topped it off. Looking back, the experience was so stressful and like something from a movie or a Top Gear challenge.

“But it was so much fun and a brilliant story that I will be telling at the wedding, and hopefully to my kids – and then their kids.

“All in all, we all must have spent at least €400 each – then we had to get lifts from Dover. But this ended up being the best weekend of my life.”

Thousands of Brits are still stranded in Europe amid ongoing travel chaos put down to various issues, such as staffing and weather.

But Alex and his friends only discovered their flight was cancelled after they arrived at the airport.

Fruitless attempts at renting a car and getting Eurostar tickets ensued, before it was suggested that a ferry to Dover would be viable. The party then boarded a train to Calais, which went via Brussels and Lille.

But, while travelling, they discovered that health and safety rules prevented foot passengers from using the only service they could make that day. It was then that someone suggested trying to buy 14 bikes during stopovers in the European cities.

Some managed to buy bikes in Brussels, while the rest picked up bargains in Lille. Alex, who is getting married next month, said: “We had to spend two hours running around Lille to get bikes.

Alex, from Worthing, West Sussex, said: “We had booked a Calais to Dover crossing but you needed bikes to get on – no foot passengers were allowed.

“I was on Facebook Marketplace for two hours, with the pin location set to Lille, trying to arrange to buy some of these bikes. They ranged from €40 – to €220.”

Thirteen members of the group managed to find bikes, bartering with locals in secondhand shops. But, when they got back to the train station in Lille, they hit another snag.

The one service that would get them to Calais in time would only take fold-up bikes – with no exceptions. This meant the group had to hail down taxis to drive them down to the port – at a cost of €350 per car.

Arriving in Calais with less than an hour to spare, the group boarded the ferry – with the help of a charitable couple who let the member without a bike into their car. They then landed in Dover at around 11:30pm.

An easyJet spokesperson said: “We are very sorry that the group’s flight from Amsterdam to London Gatwick was cancelled.

“Nonetheless we fully understand the disruption this will have caused to their plans and we are very sorry for this. Our team are reaching out to the group to talk through their options and reimburse them for any reasonable expenses.”