An astonishing taste of life as royalty in 18th-century France: Inside the exquisite £1,600-a-night hotel at the Palace of Versailles that makes every guest feel like a king or queen

There’s a loud scratching at the door.

In normal circumstances in a hotel, not a reassuring noise.

But here at hotel Airelles Chateau de Versailles – Le Grand Controle, it’s nothing alarming – merely our butler beginning the royal 7am wake-up ritual. Next, he enters our two-bedroom suite with a small sound system from which emanates soothing harpsichord music and announces that ‘it’s time for the king and the queen to wake up’. 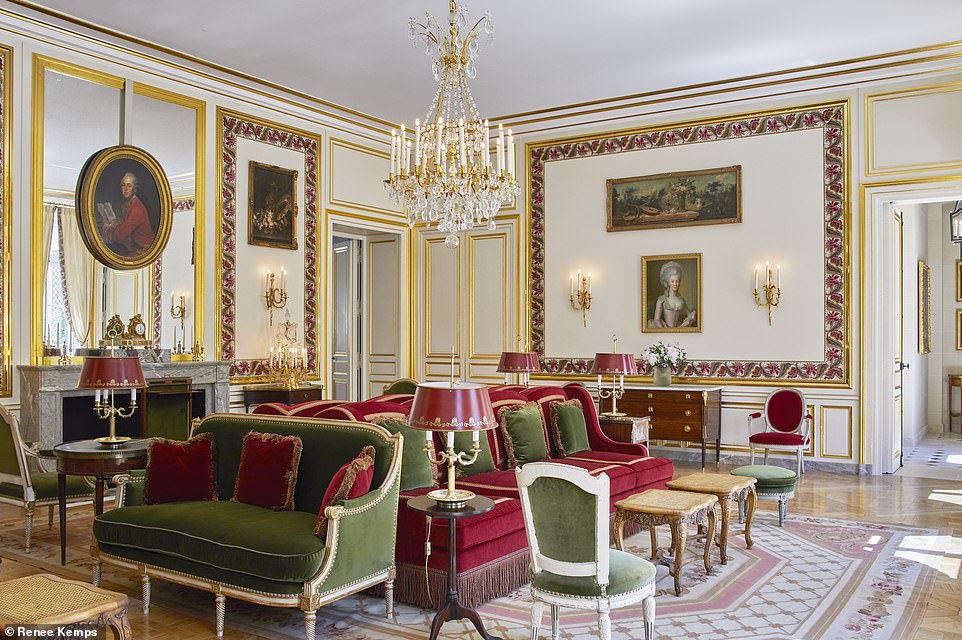 Le Grand Controle opened last year by renowned hotel group Airelles. The building that houses it is in the palace grounds. Pictured above is the breathtaking living room 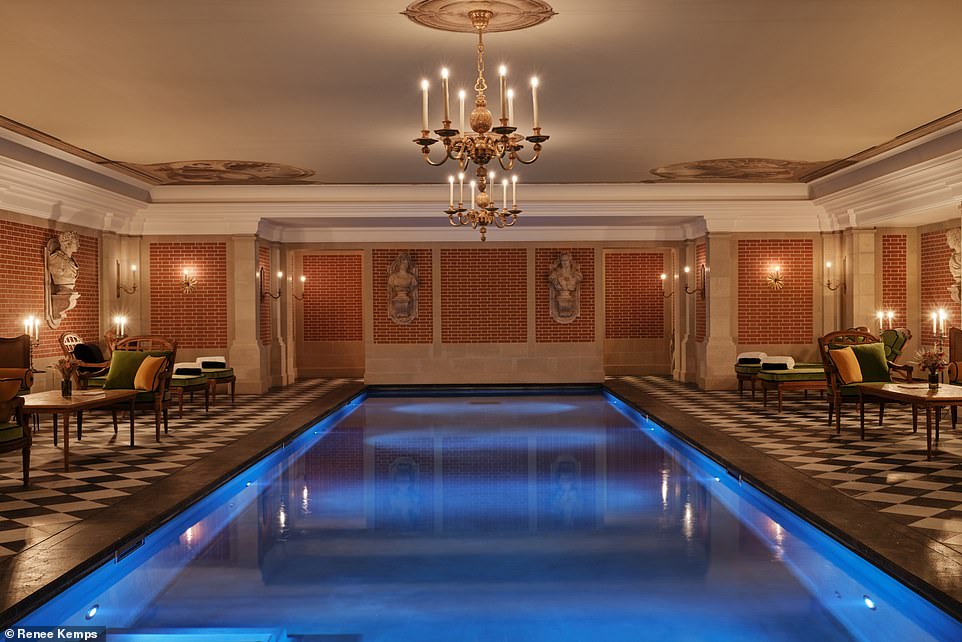 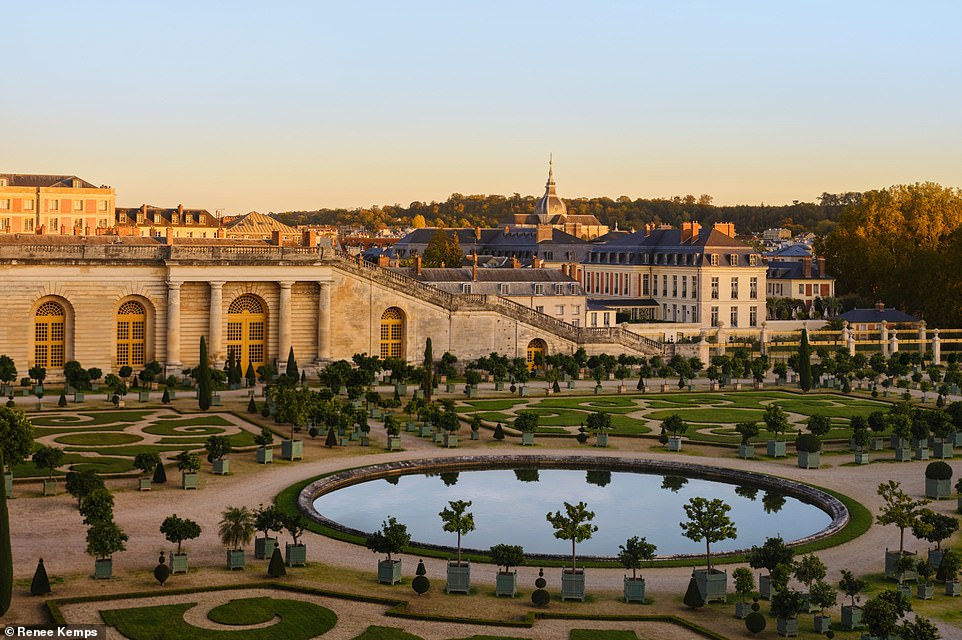 The building that houses Le Grand Controle (above right) used to be a functioning part of the palace and was built in 1681 by former resident King Louis XIV’s favourite architect, Jules Hardouin-Mansart 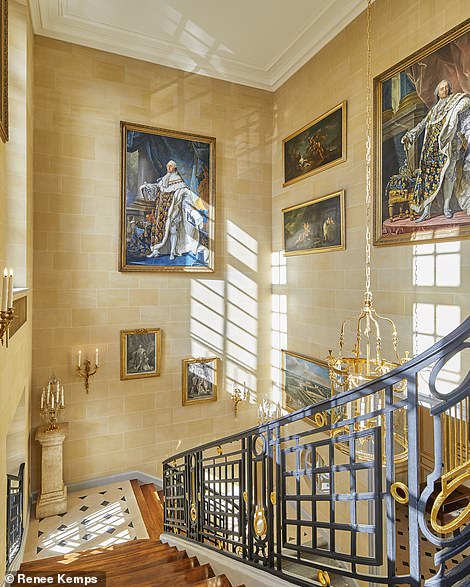 The shutters are flung open and glasses of sugared almond milk placed on our bedside tables.

‘I shall now wake up the young princess!’ he declares, picking up the sound system and marching off towards her bedroom.

Ah… Our daughter is only five and we’re not certain of her reaction to a man dressed like a Louis XVI courtier, complete with wig, appearing at the end of her bed and telling her to exit the land of nod.

But all is well. There are no blood-curdling screams. In fact, she finds it quite amusing.

The ‘royal wake-up’ is offered to give us a taste of life as a king and queen in the Palace of Versailles in 18th-century France (if you’re wondering about the almond milk – apparently, French royals drank it first-thing).

To be frank, we feel like royals in the Palace of Versailles from the moment we step across the threshold.

Not least because Le Grand Controle, opened last year by renowned hotel group Airelles, is in the palace grounds – and the building that houses it used to be a functioning part of the palace, built in 1681 by former resident King Louis XIV’s favourite architect, Jules Hardouin-Mansart, and used from Louis XV to Louis XVI’s reign as the equivalent of today’s Ministry of Finance, playing host to the European cultural elite. 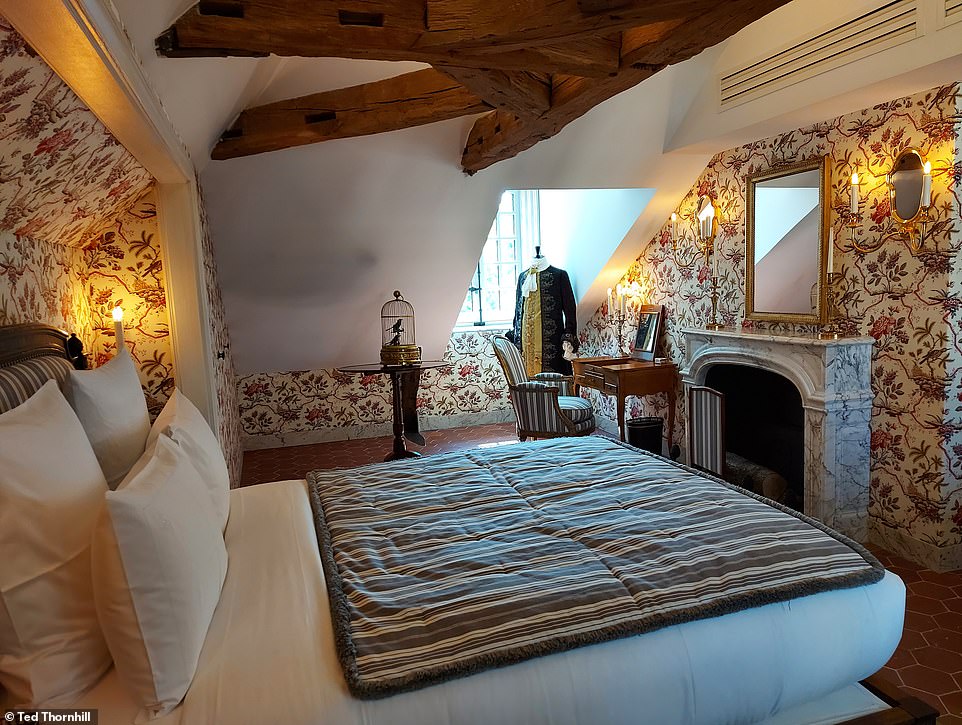 Ted and his family stay in the ‘exquisitely composed’ Rose Bertin Suite (above), named after the dressmaker to Marie Antoinette, wife of Louis XVI and the final Queen of France before the revolution 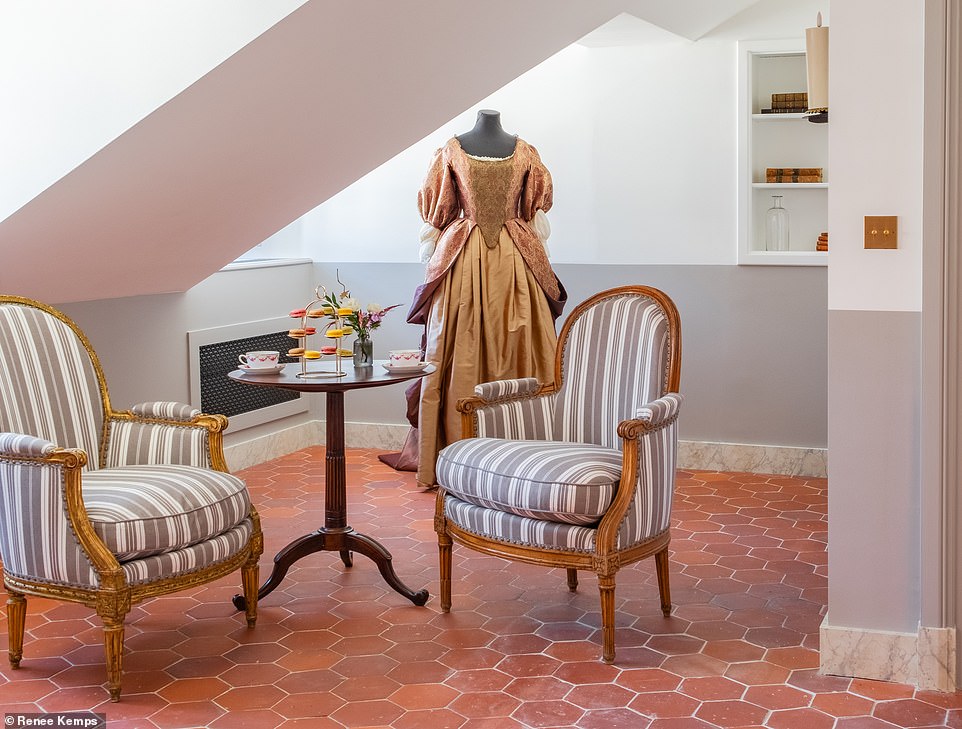 Ted says of his quarters: ‘It’s a spacious attic chamber – as big as our London flat – that would please any of the palace’s former royal residents’ 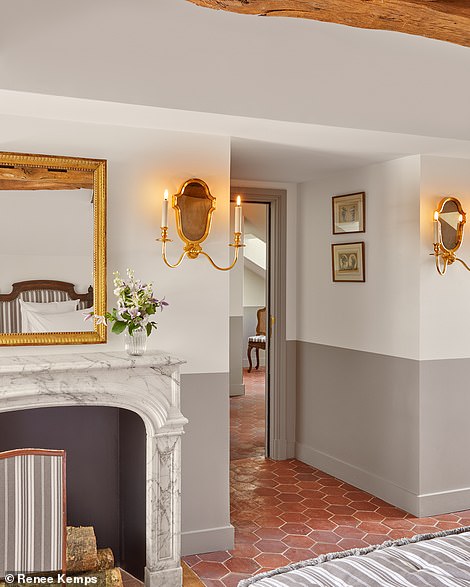 Then there’s the hotel’s impeccably authentic furniture and décor, the pitch-perfect service from devoted staff, the sumptuous bedrooms, the outrageously opulent pool and the incredible Michelin-starred dining experience – The Feast – by superstar chef Alain Ducasse, which takes us back to the time of Louis XIV’s reign, with dishes inspired by meals he ate and wonderful theatrics by staff in flowery period outfits.

INSIDE THE KINGS’ CHAMBERS IN THE PALACE

And we can almost imagine how it feels to be a French royal during a complimentary after-hours VIP tour of the palace – one of the perks of a stay at Le Grand Controle.

We are in a group of just 12 or so hotel guests – so it’s easy to detach and stand alone in the remarkable corridors and rooms, to immerse fully in the majesty of it all, the outside world seeming a world away.

The palace began life as a modest hunting lodge, built by Louise XIII in 1623. Over more than a century, the building was enlarged and embellished to house the courts of Louis XIV, XV and XVI.

Today it’s considered one of the finest achievements of French architecture, a magnificent palace-city covering 8.15 square kilometres (3.1 square miles) with 2,300 rooms and ornate gardens with 200,000 trees and 210,000 flowers. 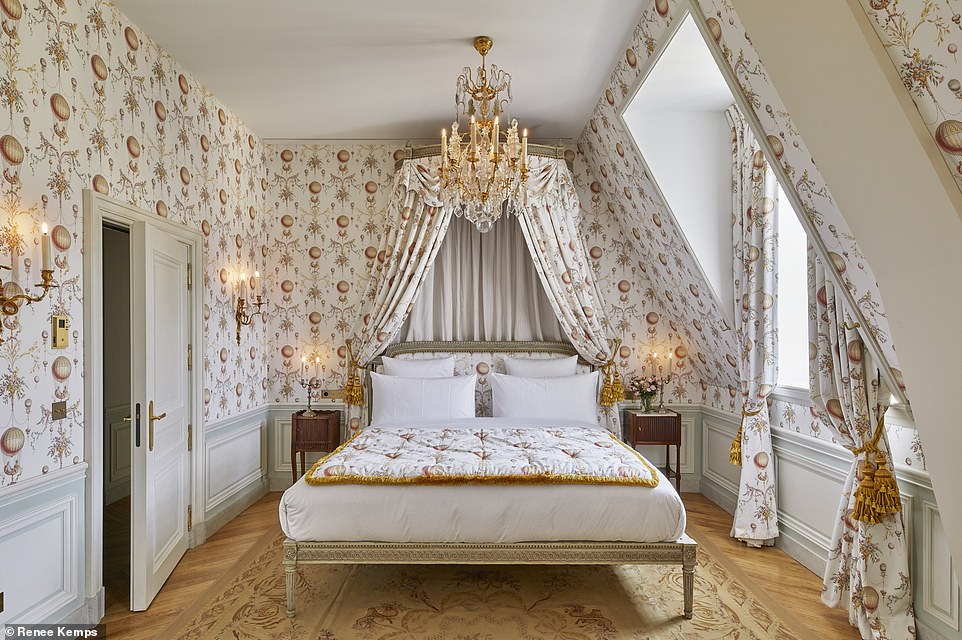 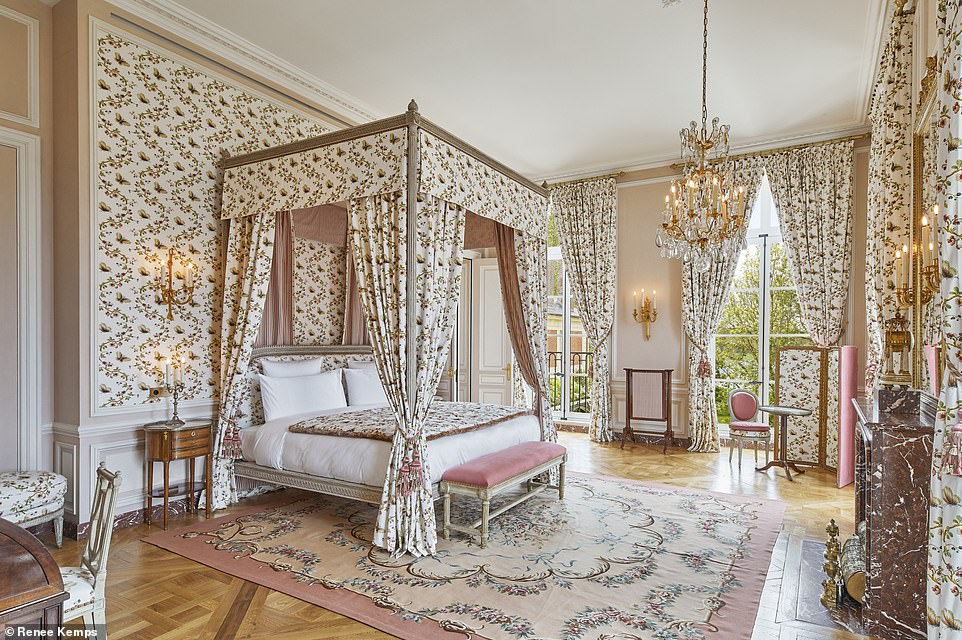 The Necker Suite (above) is the former private apartment of Jacques Necker, the finance minister and statesman who became a significant figure in the French Revolution. Serving under Louis XVI, he was arguably the most popular minister of the era 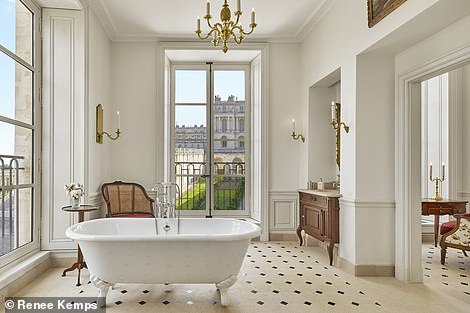 Above is the Necker Suite bathroom

On our exclusive exploration, we take in some of the palace’s most intriguing – and breathtaking, rooms – from the Hall of Mirrors to private chambers where Louis XIV and Louis XVI slept.

There are hidden doors, a writing desk with secret compartments, colossal OTT beds and stunning paintings.

The group is visibly awestruck.

To reach the main palace we simply walk out of a hotel side door that leads into the gardens and walk, via the monumental Hundred Steps staircase (there are literally 100 steps, there’s no artistic licence in the title).

And that’s another perk – Le Grand Controle guests have 24-hour access to the world-famous gardens through this door. Fancy a walk through them under the moonlight? Aucun problème.

Before the ‘Feast’, we savour getting ready in our exquisitely composed Rose Bertin Suite, named after the dressmaker to Marie Antoinette, wife of Louis XVI and the final Queen of France before the revolution (all the rooms are named after figures from Le Grand Controle’s history).

It’s a spacious attic chamber – as big as our London flat – that would please any of the palace’s former royal residents, with sumptuous king-sized beds, fine furniture, terracotta flooring, exposed wooden beams, twin en-suites in separate rooms with rain showers, cupboards cleverly hidden behind beautifully embroidered panelling – and two mannequins dressed in period clothing in honour of Rose and her sewing skills.

We fall in love with it. 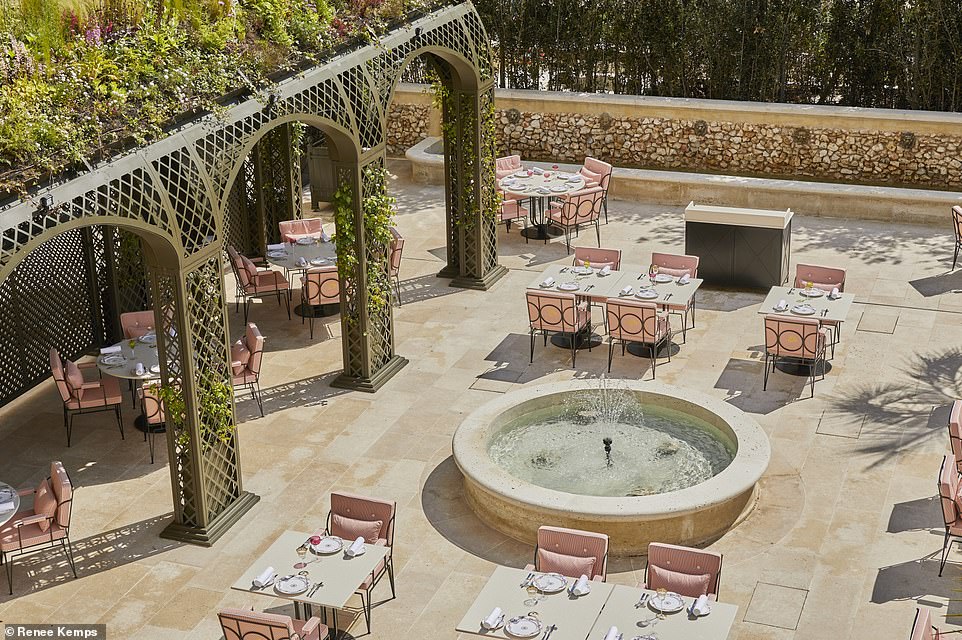 The hotel’s lovely terrace, where Ted and his family enjoy an afternoon tea and a lunch 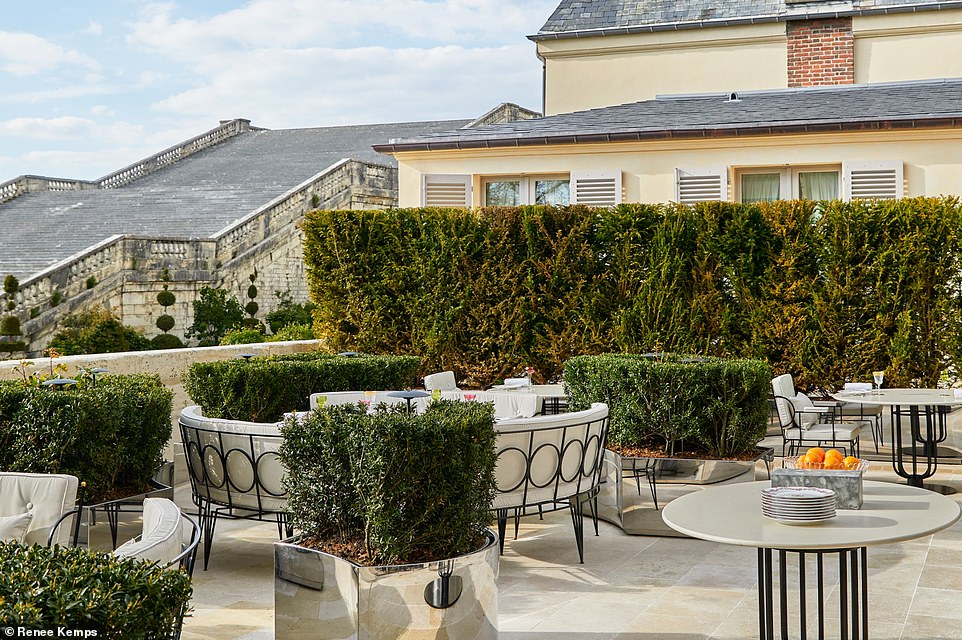 The hotel sits right next to the monumental Hundred Steps staircase (there are literally 100 steps, there’s no artistic licence in the title)

The room, one of just 14 at this ultra-exclusive haven, exemplifies what Airelles, using the skills of architect and interior designer Christophe Tollemer and palace historians, has achieved with the hotel as a whole – to faithfully reproduce the lavish interiors of Le Grand Controle as it would have been in 1788, the year of its last inventory.

Airelles said that Tollemer ‘spent many hours carefully consulting the chateau archives to ensure Le Grand Controle’s past was brought to life in the most authentic way possible’.

Unique antiques and art were sourced and where possible original items restored.

But Airelles goes further – all the staff wear outfits reminiscent of the period, not just the wake-up butlers and waiters and waitresses in the Ducasse feast.

And the gardens and terraces ‘pay homage to the grand past of Versailles’.

A FEAST FIT FOR A KING – ANY KING 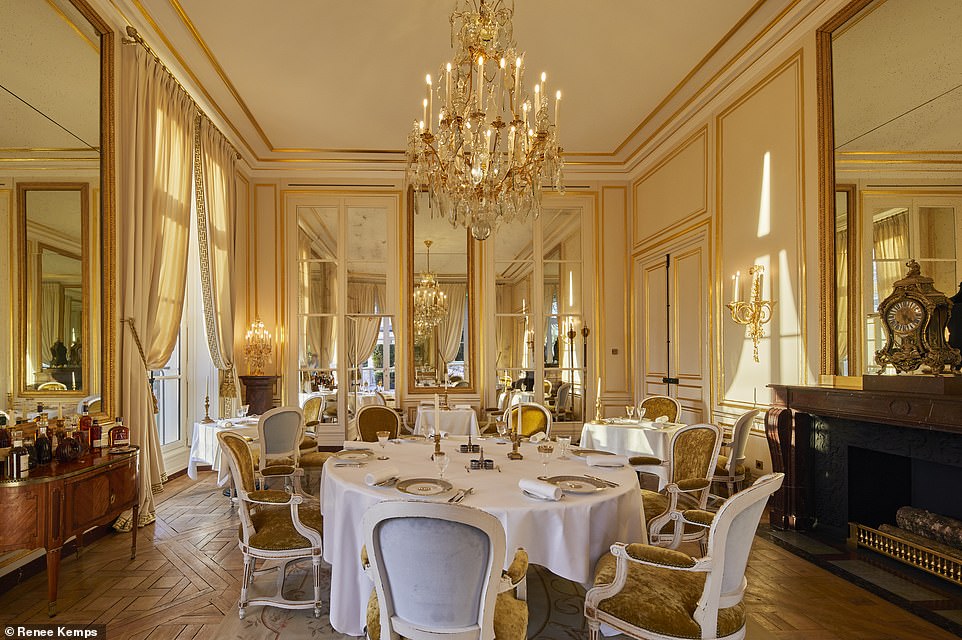 We enjoy a superb afternoon tea and a lunch on the terrace, but the ‘Feast’ is the jewel in the crown of Grand Controle’s food offering.

It takes place in the main dining room, accessed via the hotel’s gorgeous living room, resplendent with plush red and green sofas.

Once seated – in a space seductively smothered in gold paint, thick drapery and twinkling chandeliers, and with spectacular views of the Orangerie Gardens – we’re treated to a flamboyant five-course gourmet banquet, with theatrics that begin almost immediately.

As soon as we state our preference to one of the waiters for sparkling water, he claps his hands with gusto and shouts to a colleague ‘water for the king and the queen!’ 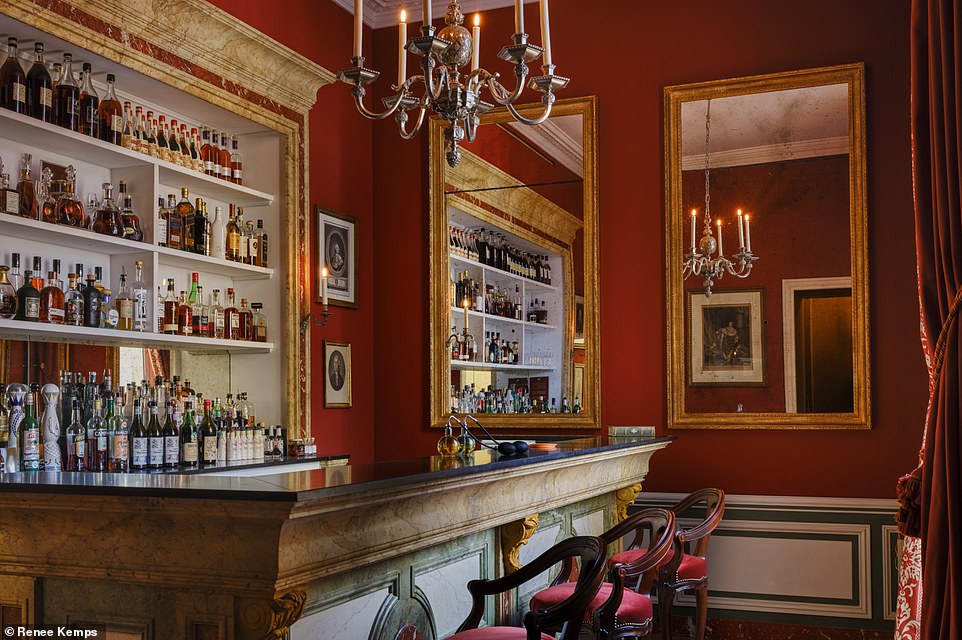 The Palace of Versailles began life as a modest hunting lodge, built by Louise XIII in 1623. Pictured above is Le Grand Controle’s bar 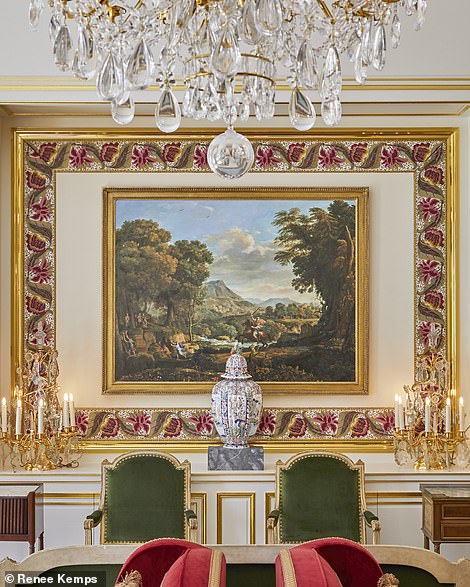 Ted describes the living room (above) as ‘gorgeous’

Following this, we’re served glasses of house Champagne and a loaf of rustic Crunch Me bread accompanied by two types of homemade butter – salted and lightly seasoned with Espelette pepper.

Following amuse bouche presented on a silver platter – which includes a delightful mini souffle with a dollop of lemon cream on top – we’re presented with entrees: summer vegetable croustade topped with basil; langoustine with a broth of langoustine infused with ginger, red chilli and mint; and my favourite – a sort of egg blancmange (made from whisked egg whites and injected with Noilly vermouth) in a ‘lettuce sauce’, with a generous sprinkling of caviar sitting on the candied egg yolk in the middle. Plus edible gold leaf to match the paintwork.

So far, so wonderfully decadent.

The food is superb, beautifully prepared and presented. The wine good enough for any royal taste bud (we particularly enjoy the 2020 white Chateauneuf-du-Pape by Chateau de Vaudieu). 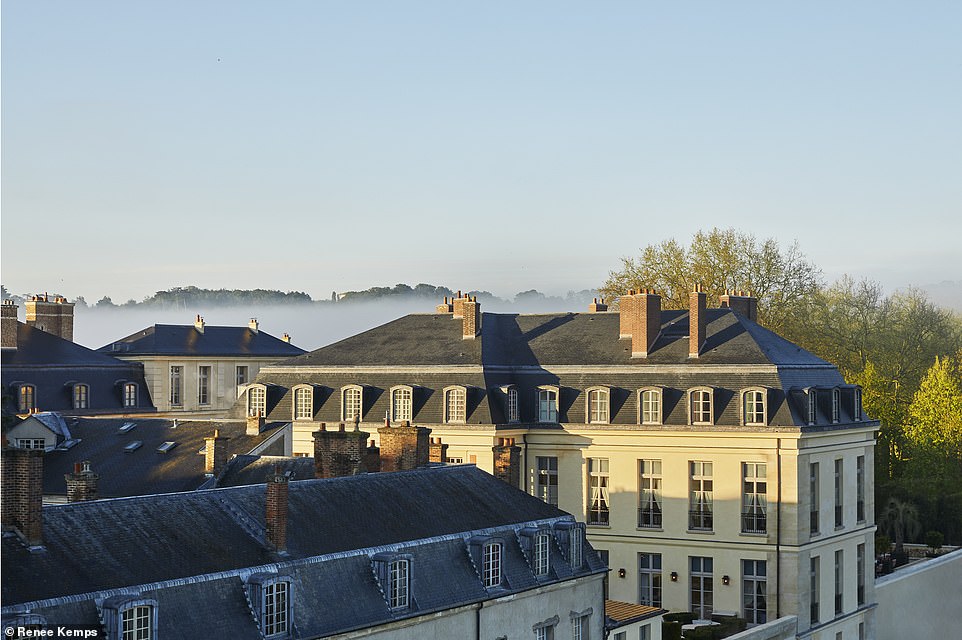 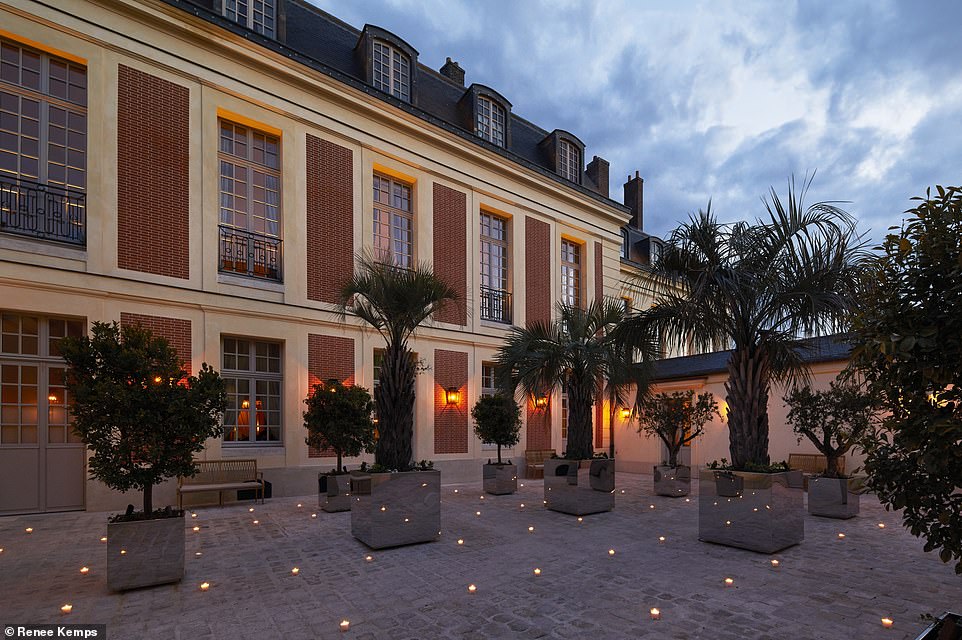 This image shows the main entrance to Le Grand Controle, which has been furnished using the skills of architect and interior designer Christophe Tollemer 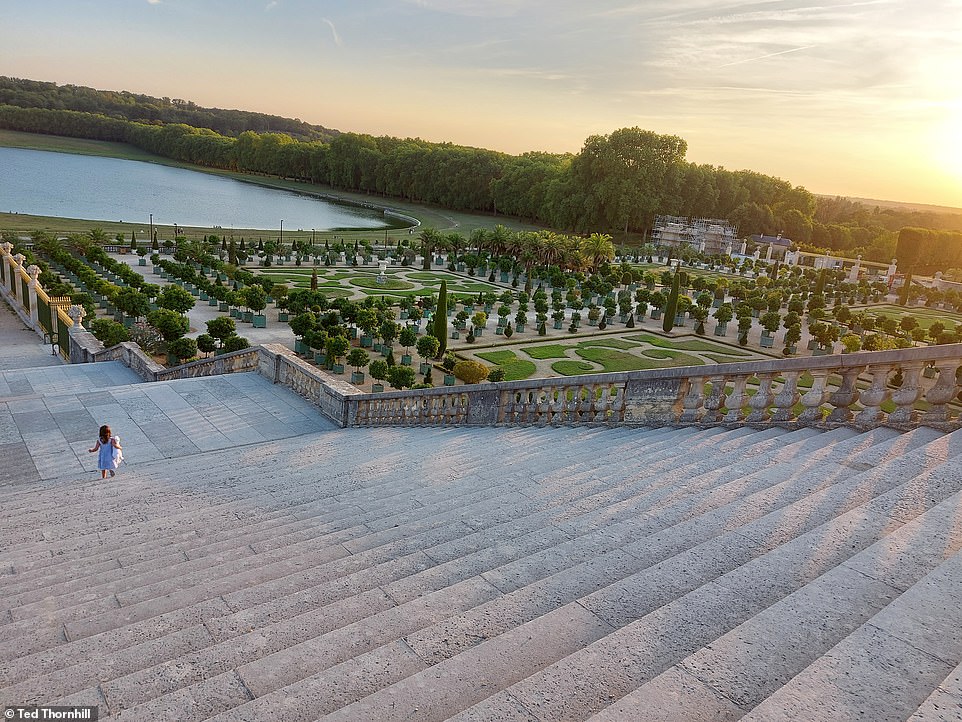 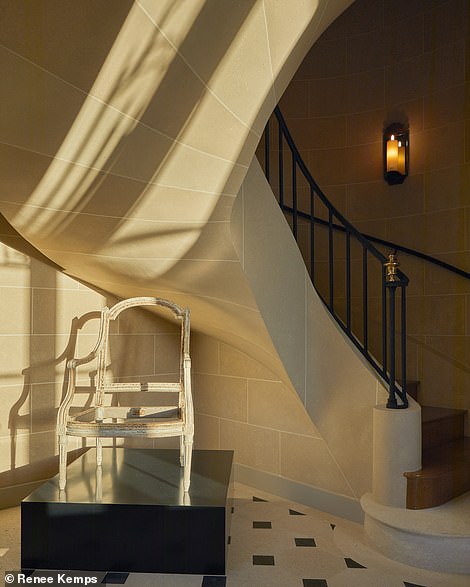 And the theatrics are the icing on the cake, the highlight being when a bewigged waiter appears to announce the courses, strutting between the tables with a huge staff as he describes the treats and then banging the staff on the floor with a cry of ‘aux gourmandises du roi!’ – roughly translated as ‘to the king’s delicacies’.

We return to the dining room in the morning for a five-star breakfast, then enjoy another VIP guided tour, this time around the mesmerising Grand Trianon, a highly refined single-storey building that Louis XIV had built in 1670 as a more private retreat away from the Court.

The Grand Trianon hosted the G7 summit in 1982 – and put up the delegates. We’re shown the enormous suites where Ronald Reagan and Margaret Thatcher slept.

We finish our stay with a lingering splash about in the glorious subterranean 15m pool at the hotel, which has to be seen to be believed – it’s finished in marble and stone, decorated with busts inspired by the courtyard of the palace, and there are luxurious antique sofas, loungers and chairs on the poolside.

If this wasn’t Le Grand Controle, I’d be convinced I’d been warped into Lara Croft’s mansion.

Checking out is agony, for all three of us had quickly grown accustomed to the regal life.

As the taxi for Gare du Nord and the Eurostar home sets off, I look wistfully back at the grand edifices I called home for a night, then search for harpsichord music for my phone alarm clock…

PROS: It’s a hotel that’s exquisitely decorated and furnished – in places breathtakingly so. Wonderfully authentic. One of the finest hotel pools in the hospitality industry. Delightful and truly memorable dining. Impeccable service (though this will not surprises guests who’ve stayed at other Airelles properties). VIP Versailles Palace tours and garden access are incredible perks.

CONS: None (if you can afford it).