Breathtaking views, pistes that pack a punch – and for skiers with Bridget Jones skill levels… instructors with A LOT of patience: The joys of skiing in the Alpine hideaway of Slovenia

Bridget Jones once said: ‘Told a tiny lie about being an extremely experienced skier. But honestly, how hard can it be?’

Well, quite hard as it happens.

While I envisaged hopes of emulating a graceful Lindsey Vonn or fearless Eddie the Eagle, as I took to the slopes for the first time I bore something of a striking resemblance to the hapless fictional reporter – limbs askew, sliding backwards down a mountain before landing face-first in snow. 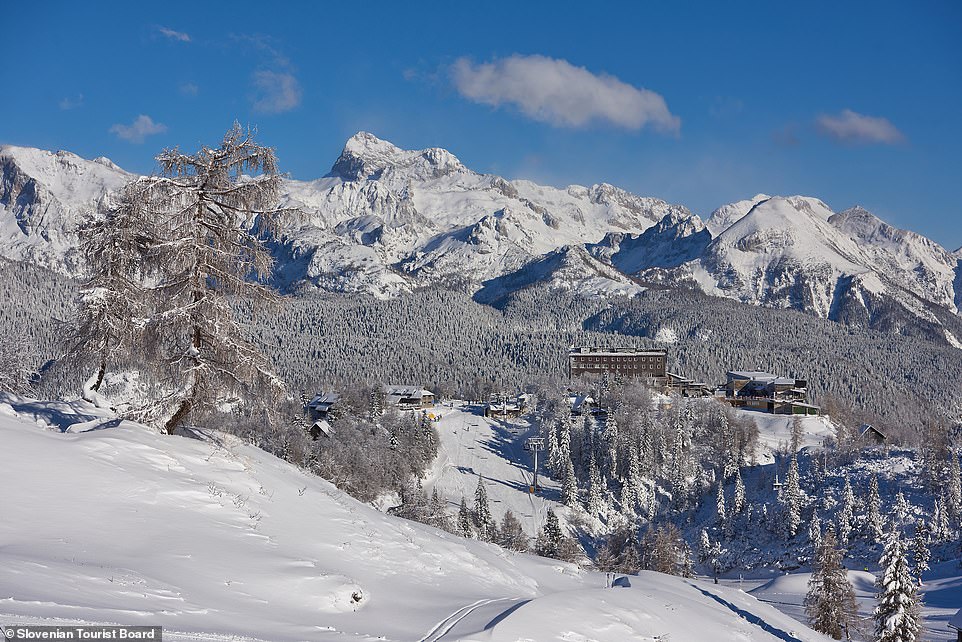 Amie Gordon puts the ski resorts of Slovenia to the test, hitting the slopes in Rogla, Krvavec and Vogel (pictured above) 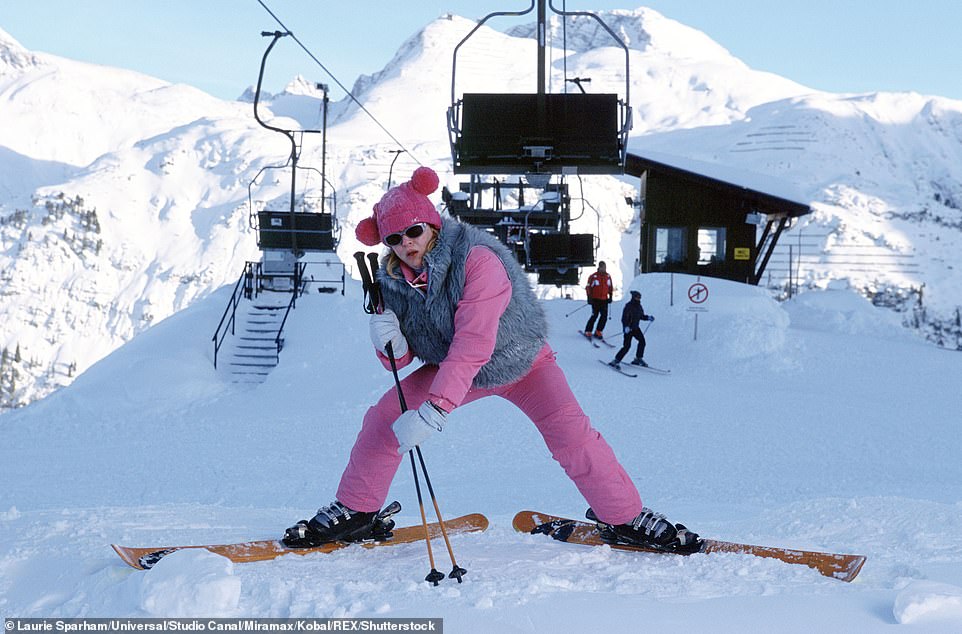 Bridget Jones: ‘Told a tiny lie about being an extremely experienced skier. But honestly, how hard can it be?’ Above is a scene from 2004’s Bridget Jones: The Edge Of Reason 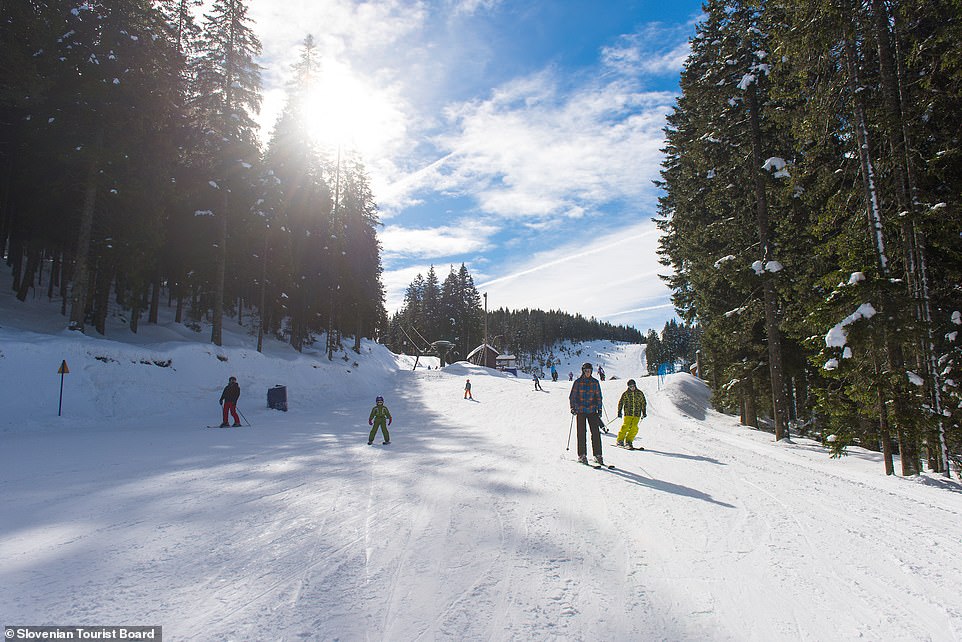 The reason for this reckless little adventure? I was invited by the Slovenian Tourist Board to sample the ski resorts of a country often overlooked in the winter sports department in favour of its trendier neighbours France, Italy and Switzerland.

My visit coincided with the Winter Olympics in Beijing, during which Slovenia’s national team was soaring to glory, securing two gold, three silver, and two bronze medals – every single one in skiing.

Team GB got medals only for curling, so needless to say we could probably use a bit of help on the slopes.

Slovenia is standing by. This tiny Alpine hideaway has brilliant instructors and is perfect if you want to dip your toes in the snow for the first time, take the kids on an active holiday or simply want to venture to somewhere off the tourist trail in Europe. 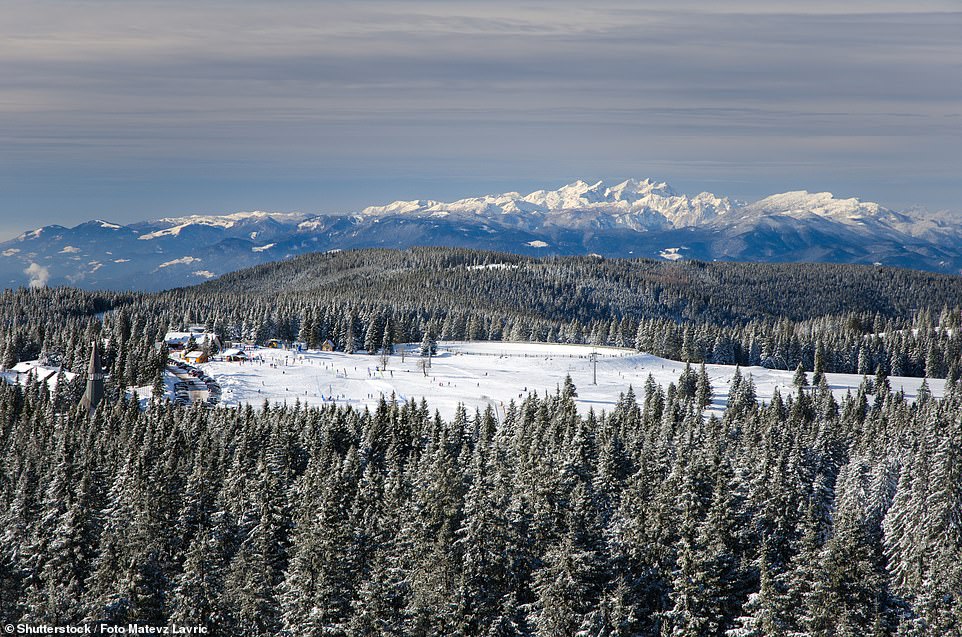 Amie successfully managed to crash into the only two other people on an otherwise entirely empty ski run in Rogla, pictured 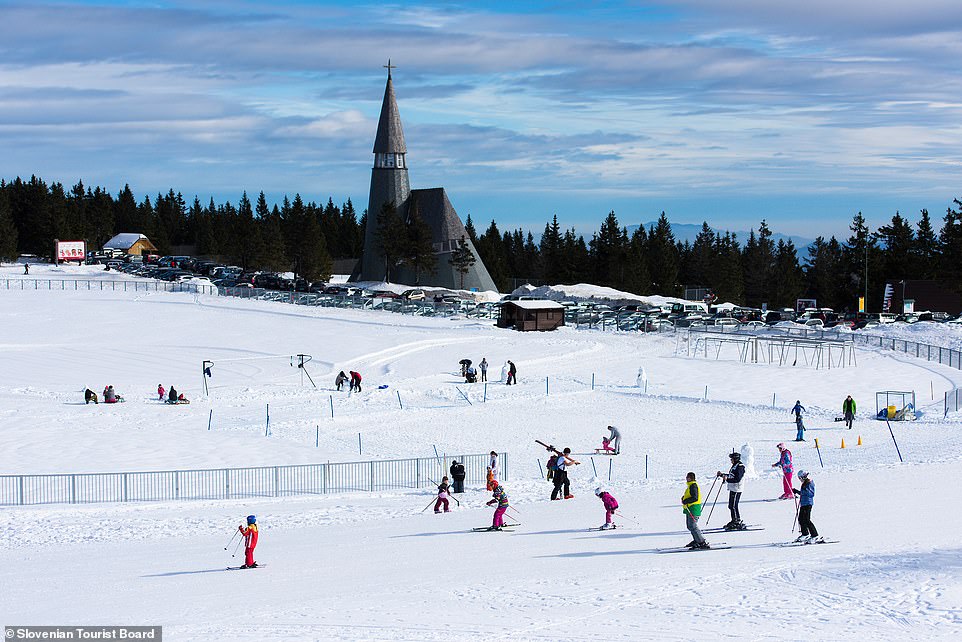 ‘Slovenia is one of the few places where you can ski in the morning before driving along the coast to enjoy a warm dip in the sea in the afternoon,’ writes Amie. Above are the slopes in Rogla 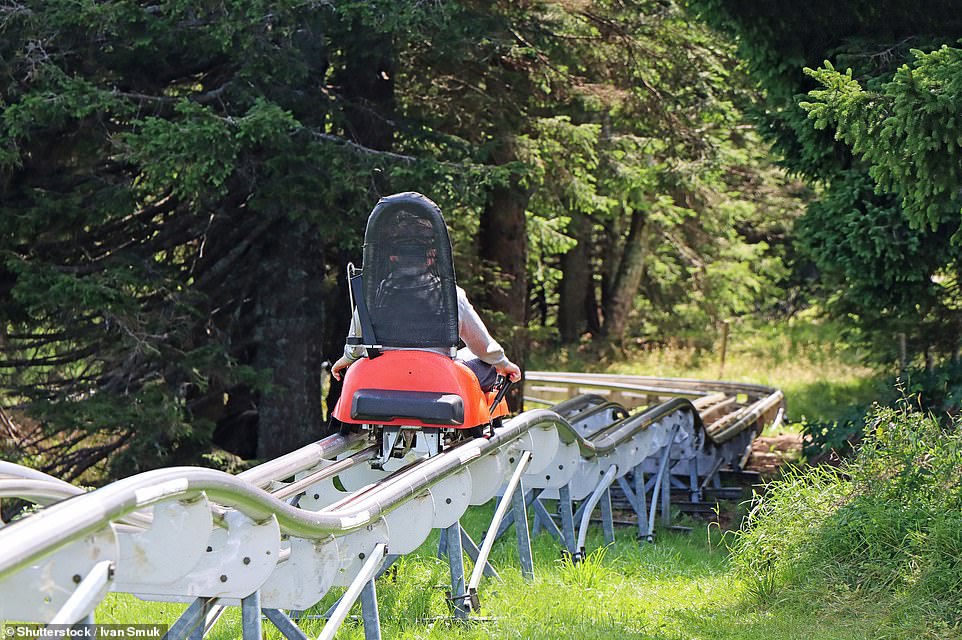 Strap in and take a ride on a toboggan roller coaster in Rogla (pictured), which races along at a top speed of 40kph (24.8mph) 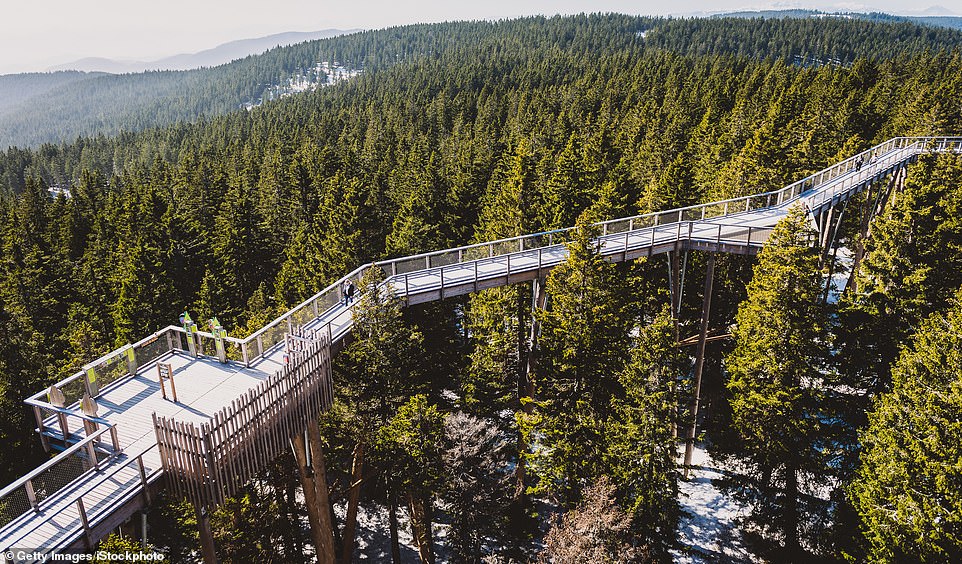 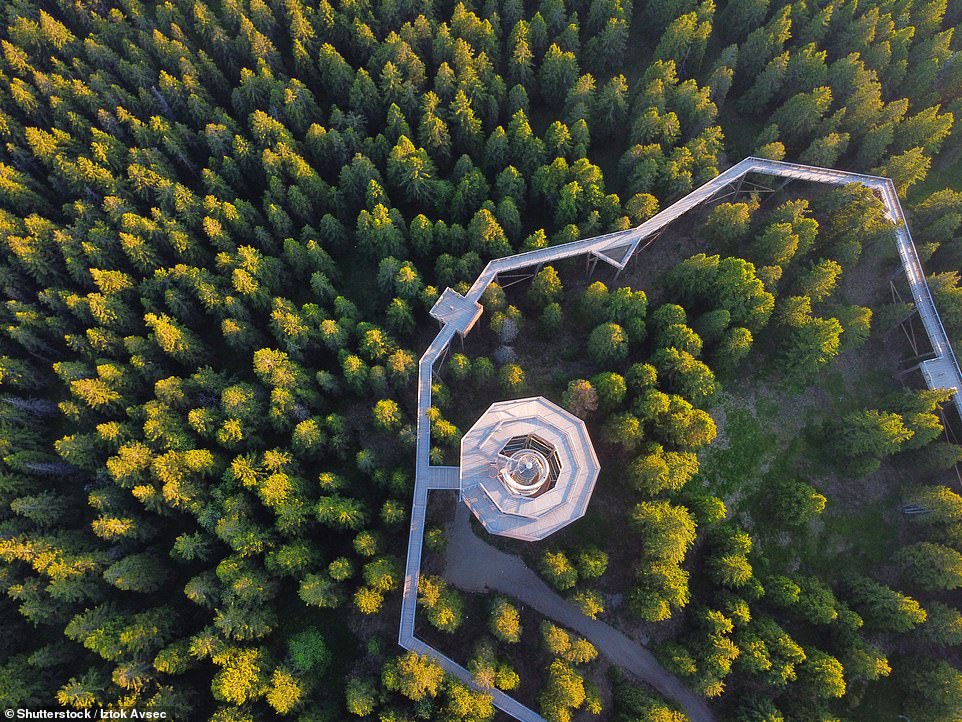 An aerial view of Rogla’s treetop walk. If you fancy an adrenaline rush, you can take a slide down from the summit, Amie reveals

One of Slovenia’s most popular ski resorts, just 25km (15.5 miles) from Ljubljana and 8km (4.9 miles) from international Ljubljana Joze Pucnik Airport. A cable car that operates all year round will take you to the summit of Krvavec, which lies between 1,450 metres (4,757ft) and 1,971 metres (6,466 ft) above sea level. It boasts 30km (18.6 miles) of pistes of varying difficulty. Other facilities in winter include a snow park for snowboarders, children’s winter park, night tobogganing and snowbiking. For more information visit rtc-krvavec.si.

This 100-acre resort attracts more than 200,000 skiers every year, has 11 lifts and two four-seater chairlifts, night skiing on two tracks and 100 days of snow annually. It also boasts a fun park for boarders and freestyle skiers, and 25km (15.5 miles) of cross-country skiing trails. For more information visit www.rogla.eu/en/.

What’s more, if you’re feeling particularly adventurous, Slovenia is one of the few places where you can ski in the morning before driving along the coast to enjoy a warm dip in the sea in the afternoon.

It also has hundreds of natural hot springs, spas, wellness and health retreats to soothe aching muscles after a day on the piste.

I visited three ski resorts – Rogla, Krvavec and Vogel – each offering a different experience, for every level of skier.

All of the slopes are used daily by gold-medal-winning Olympic skiers. 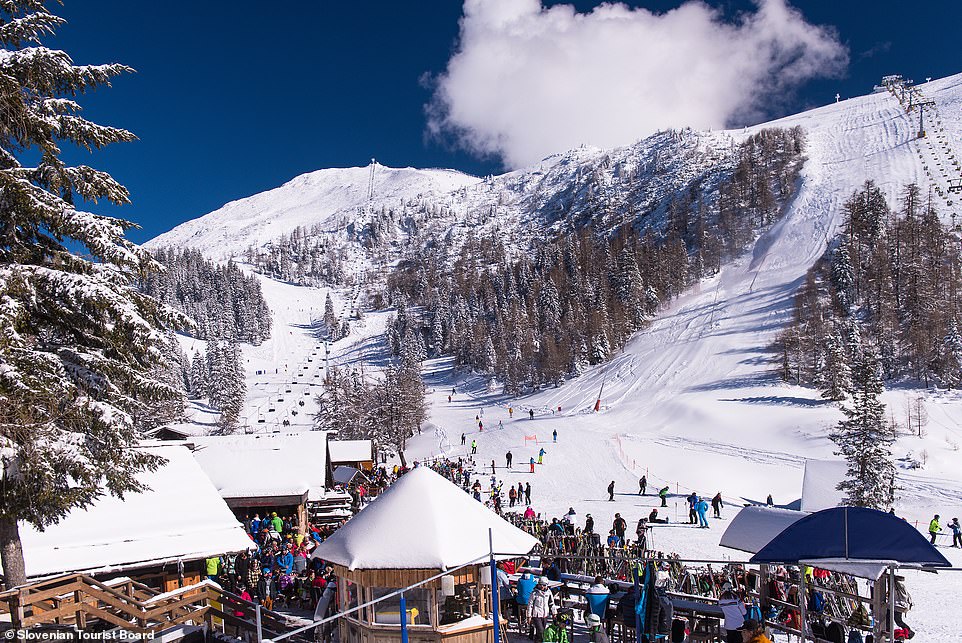 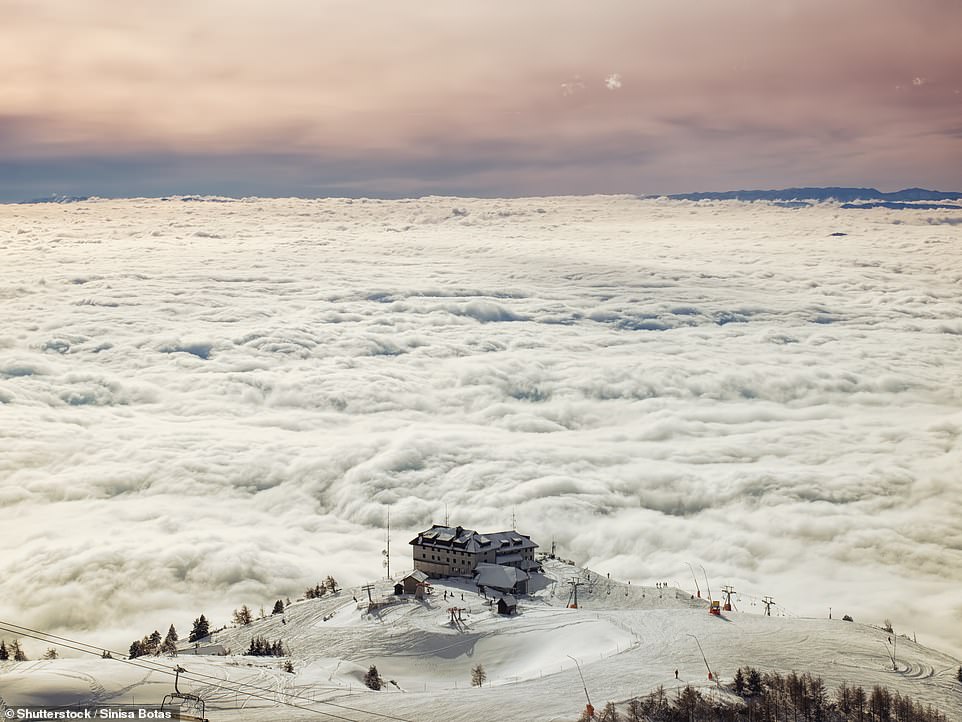 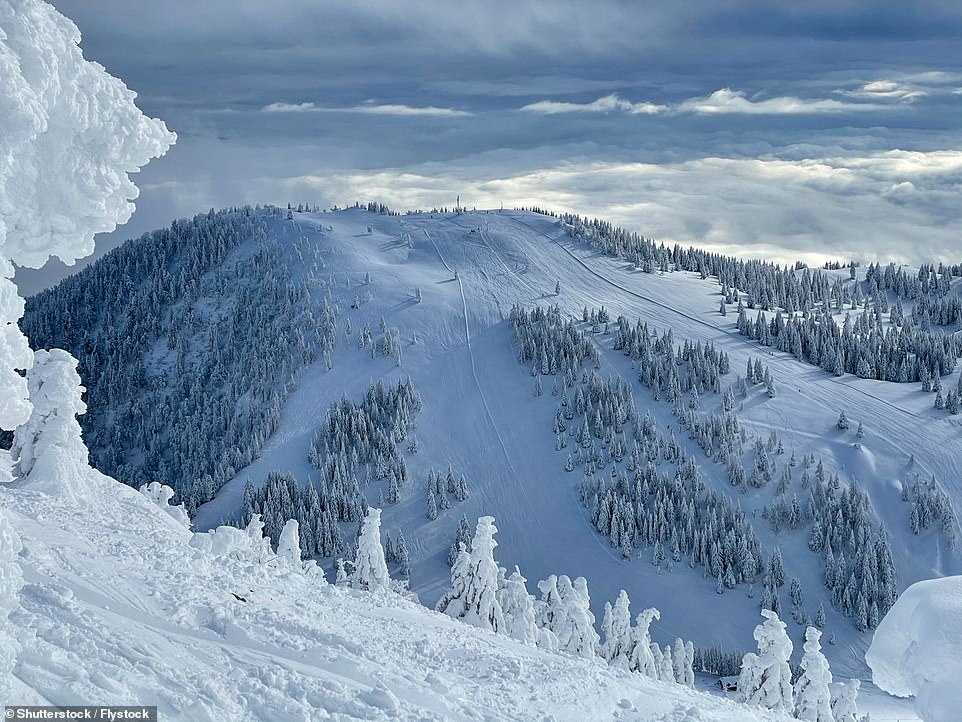 SLOVENIA: A HOTPOT OF CULTURES AND AN IDEAL HOLIDAY DESTINATION FOR BRITISH FAMILIES

Triglav mountain, which with a summit at 2,864m (9,396ft) is the highest peak of Slovenia’s Julian Alps mountain range

Nestled between Croatia, Hungary and Austria and sitting in the shadow of the Julian Alps mountain range, Slovenia measures just 7,827 square miles (20,271 square km) and boasts a population of just over 2.1million.

So not much quantity, but plenty of quality.

This Balkan country, just two hours from London, is a hotpot of cultures and influences – with Croatia to the south, Italy to the west, and Austria to the north – and is ideal for holidaying British families on a shoestring budget who don’t want to roam too far from home.

For much of its history, Slovenia was largely controlled by the Habsburgs of Vienna, before falling under Communist rule during the post WW2 period while it was part of Yugoslavia.

This varied occupation has influenced not only the food and architecture of the country, but the language. Slaviks pride themselves on their ability to pick up languages quickly and English is widely spoken throughout.

Dubbed the ‘Green Heart of Europe’, Slovenia prides itself on sustainable living – residents grow and cook their own vegetables and many of its Michelin-plate restaurants will only use food sourced from local producers.

Forests home to brown bear, wolf and lynx cover three-fifths of its surface area and the country’s forests hold the European record for C02 absorption, with nine tonnes of accumulated carbon dioxide per hectare per year.

At family-friendly Rogla, which has a top altitude of 1,517m (4,977ft) and attracts more than 200,000 visitors every year, I enjoyed my first day strapped to the skis under the watchful eye of Uros Martinsek.

His patience was second-to-none, even when I successfully managed to crash into the only two other people on an otherwise entirely empty ski run.

If you don’t fancy a full day of skiing, you can strap in and take a ride through the park on a toboggan roller coaster. 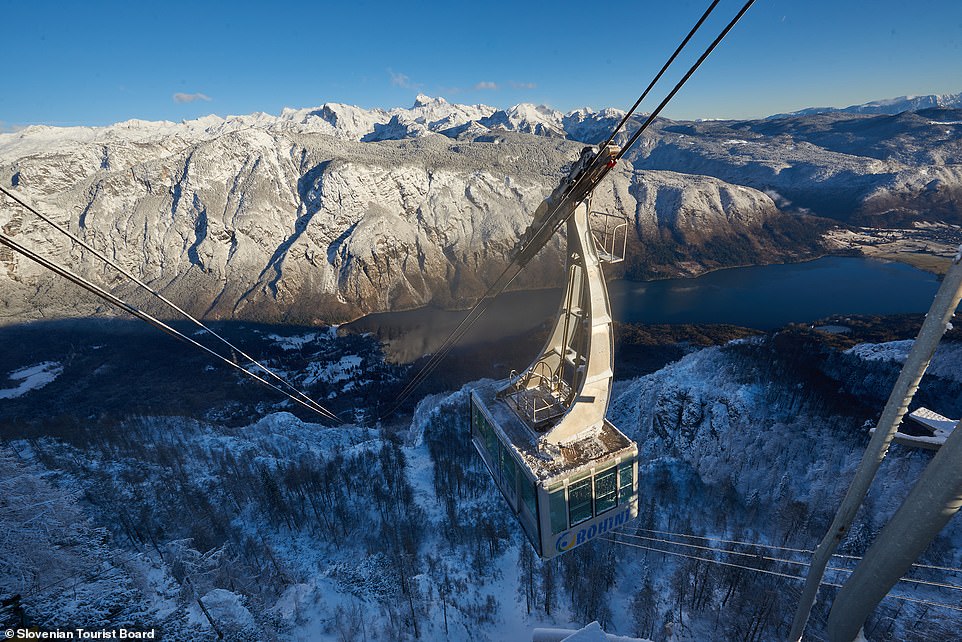 High life: The Vogel ski resort within the Triglav National Park can only be accessed by this cable car 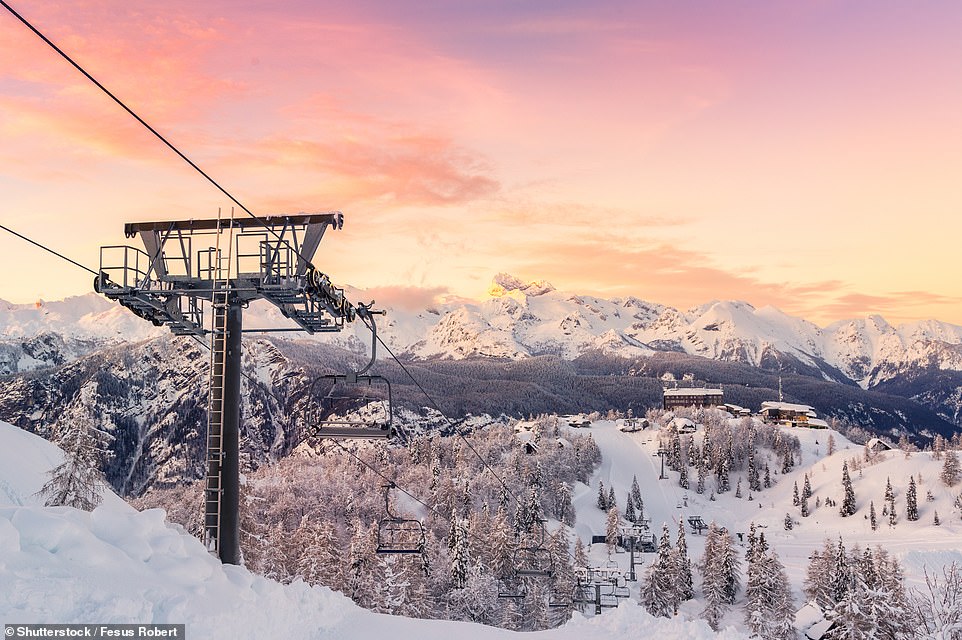 Amie’s favourite resort of the trip was Vogel (pictured), with ‘safe, wide ski runs where you can safely crash in the knowledge you won’t take anyone down with you’

This zero-waste bistro uses ingredients at their seasonal best, complemented with a selection of ecological wines, craft beer and homemade juices (monsterabistro.si).

Rogla also boasts a wonderful, invigorating treetop walkway, with 360-degree views at its summit over pine trees to the peaks and valleys of the Pohorje Mountains – and if you fancy another adrenaline rush, you can take a slide back down again.

Feeling brave? You can take a cable car to the summit, where you’ll be treated to breathtaking views above the clouds, and hurtle back down via a black slope.

And finally, reached only by cable car, there’s Vogel ski resort, which lies within the Triglav National Park above Lake Bohinj and has a peak elevation of some 1,800m (5,900ft).

Because it is in a national park, fake snow is banned.

My favourite resort of the trip, it was absolutely perfect for beginners and seasoned pros alike – with safe, wide ski runs where you can safely crash in the knowledge you won’t take anyone down with you.

Make sure to ask for a lesson with Jaka, if you can.

He was great fun, laughing with (or at?) me and, most importantly – pushing me out of my comfort zone.

As you look down a near-vertical ski run and wonder how on earth you will make it to the bottom alive and in one piece, he can somehow calm your nerves and make you appreciate the thrill of the sport.

Perfect for us ‘Bridget Jones’ skiers… 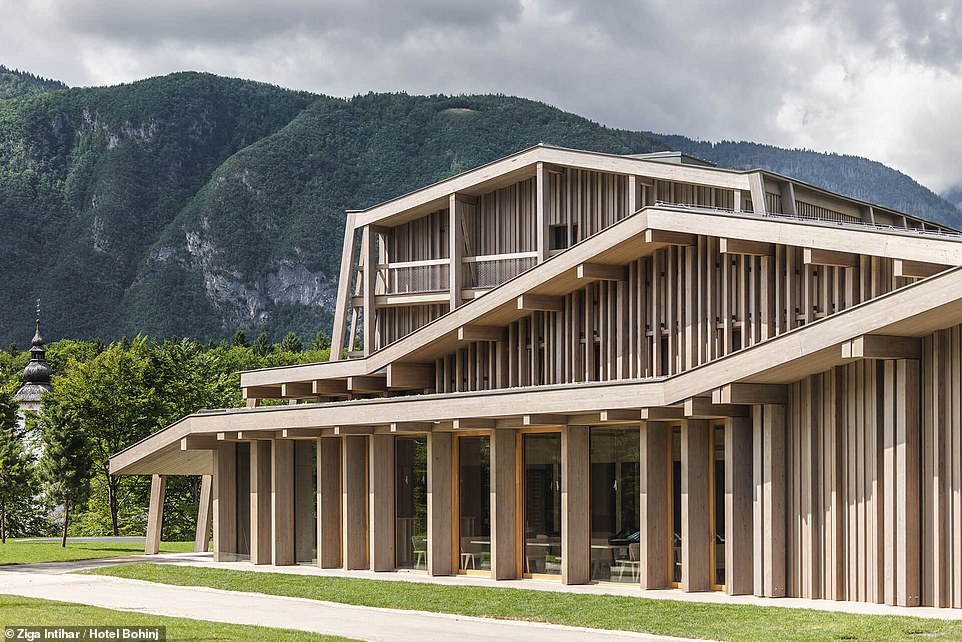 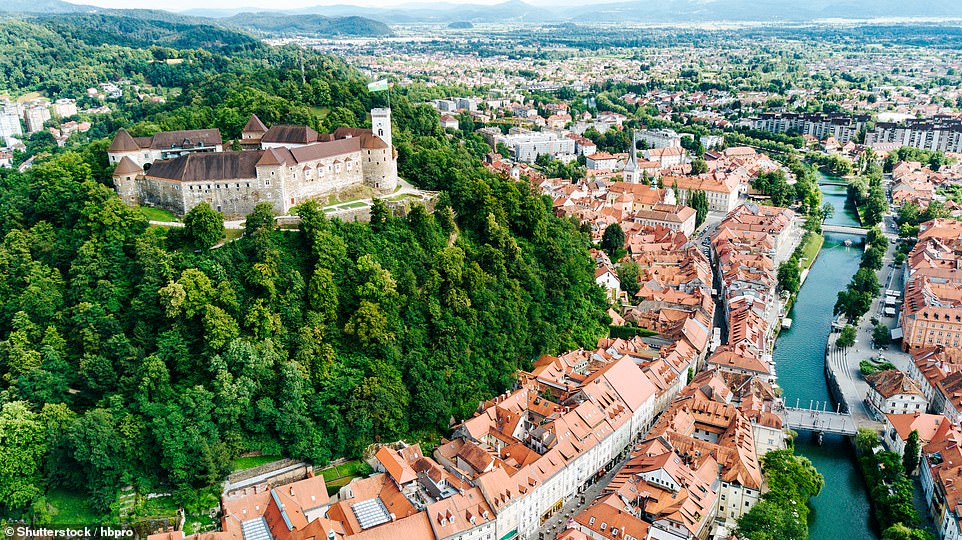