The UK’s best and worst airports ranked by Which? – ‘Doncaster Sheffield’ is No.1, Exeter and Liverpool John Lennon are joint second and ‘chaotic’ Manchester T3 comes last

Doncaster Sheffield Airport has been rated the UK’s best airport for the fourth year in a row thanks to its ‘helpful’ staff, ‘faultless’ service and management of queues through security and baggage reclaim.

The accolade comes ahead of the airport’s closure – its last flight is due to depart in the next few weeks. In second place, meanwhile, it’s a tie between Exeter and Liverpool John Lennon Airports, while Manchester Airport’s Terminal 3 comes bottom of the pile.

The rankings have been produced by a new survey by Which? Travel that asked nearly 7,500 travellers to rate their experiences at 29 UK airports and terminals over the past two years – and found that generally, smaller operations outrank their big-name rivals. 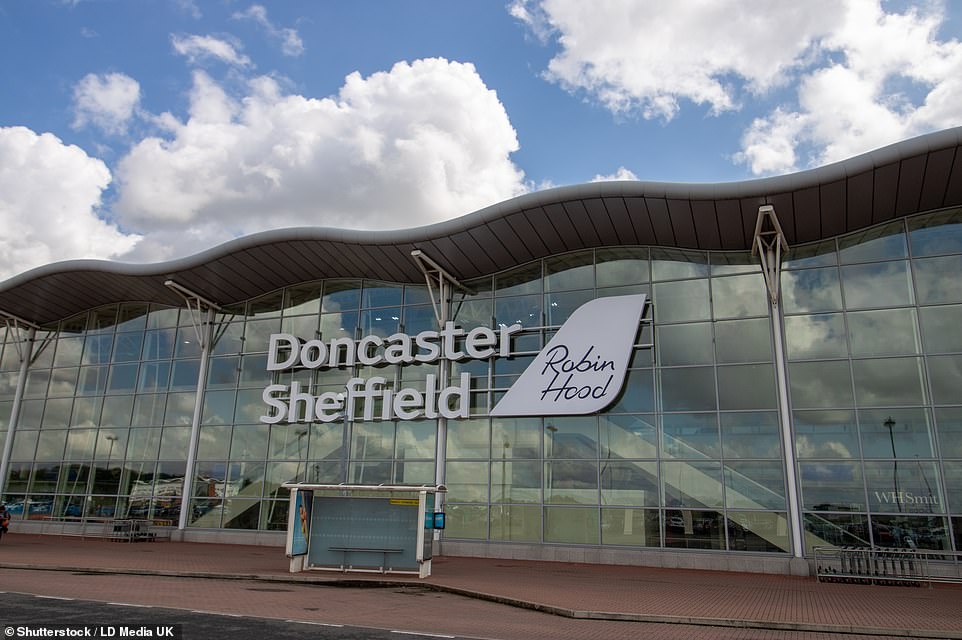 Doncaster Sheffield Airport is the UK’s best airport thanks to its ‘helpful’ staff, ‘faultless’ service and management of queues, according to a new survey by Which? Travel

Respondents ranked airports based on ten categories, including queue times at check-in and baggage reclaim, the standard of facilities, helpfulness of staff, and price of goods on offer.

First-place Doncaster Sheffield Airport earns a customer score of 85 per cent, with travellers awarding the airport’s employees a full five stars. The airport’s seating and toilet facilities were also praised, with one respondent enthusing their experience was ‘how air travel should be’.

The airport does, however, drop to four stars for queues at check-in and bag drop, while it receives its lowest ratings for the shopping experience offered – rating three stars for the price of goods, and just two stars for the range of shops.

Second-place Exeter and Liverpool John Lennon Airports have bagged a customer score of 83 per cent, with both airports earning Which? Recommended Provider status for the first time.

Which? Travel reveals that Exeter has scored a near-perfect set of five-star ratings, dropping to two stars only on the choice of shops available. Multiple respondents commented on the ‘small, friendly’ feel of the airport, with travellers praising the convenience they experienced, and notably, a lack of queues. 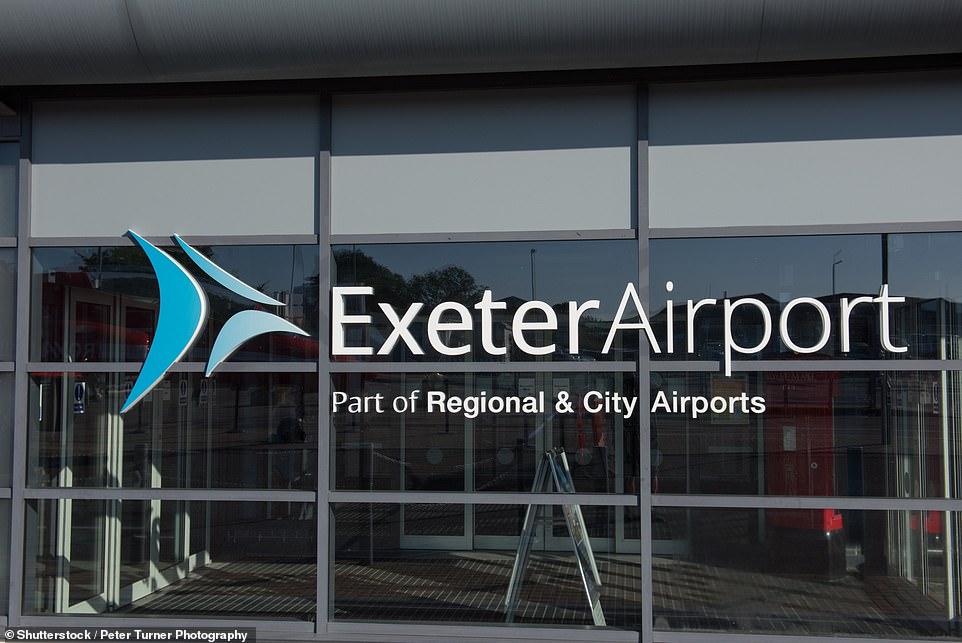 Travellers that visited Exeter Airport, which ranks joint second, remarked on the ‘small, friendly’ feel of the airport 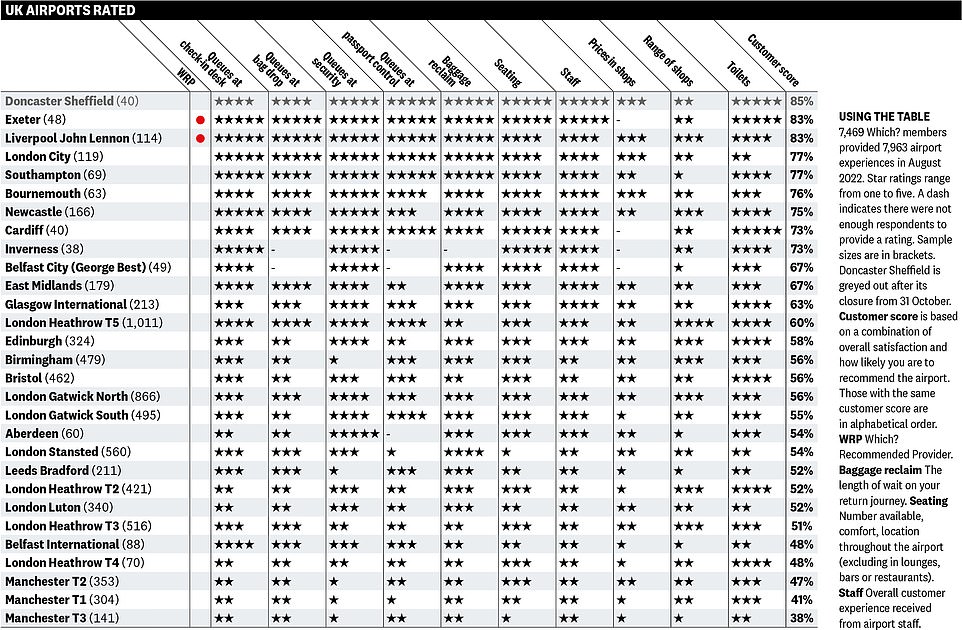 Which? Travel asked nearly 7,500 travellers to rate their experiences at UK airports over the past two years – and found that generally, smaller airports outranked their big-name rivals

It says that respondents praised the airport as ‘uncrowded’ with ‘minimal queues’ while also singling out an intuitive layout that made the space ‘easy to navigate’.

It drops one point to four stars on seating, staff, and toilets, however. And like Exeter, it has received its lowest star rating for the shopping experience on offer, achieving just three stars for both prices in shops and the range of outlets available.

Among London airports, City (77 per cent) comes out head and shoulders above the rest, achieving joint third place in the table overall (tied with Southampton), while also having the distinction of being the only London airport to make it into the national top five. 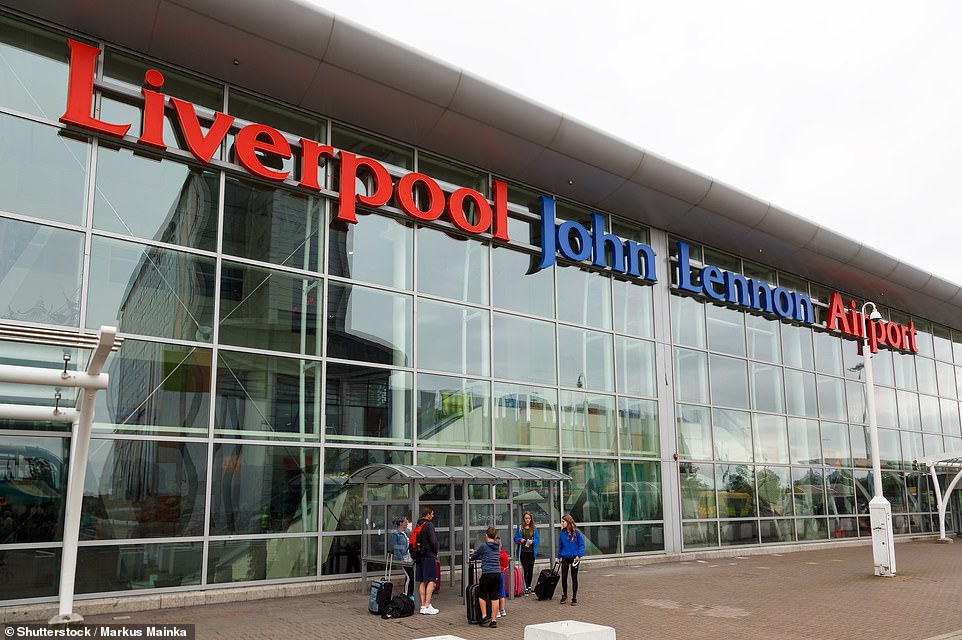 Which? Travel notes that it achieves an impressive five stars across all queue types – check-in, bag-drop, security, passport control and baggage reclaim. What’s more, it rates four stars for the quality of seating available and the helpfulness of staff.

Respondents who rated the airport highly praised their experience as ‘slick’, ‘pleasant’ and ‘painless’, and also commented on the convenience of its location, the watchdog reveals.

At the UK’s busiest airport, Heathrow, it is the ‘spacious’ and ‘modern’ Terminal 5 (ninth) that performs best, achieving a commendable four stars across all types of queues, and an overall customer satisfaction score of 60 per cent.

Its counterparts – Heathrow Terminals 2 (joint 14th, 52 per cent), 3 (15th, 51 per cent) and 4 (16th) – all languish in the bottom half of the table however, with Terminal 4 achieving a customer satisfaction score of just 48 per cent. It rates only one star for the variety of shops and two stars across all types of queues, as well as for the overall experience delivered by staff. One respondent shared that there was ‘much room for improvement’, while another remarked that the ‘queues were ridiculous’.

Manchester Airport, meanwhile, occupies the three lowest spots in the rankings. Last-place Terminal 3 (19th), with a customer satisfaction score of just 38 per cent, scores a lowly one star for queues at security, seating, prices in shops and the range of shops on offer. 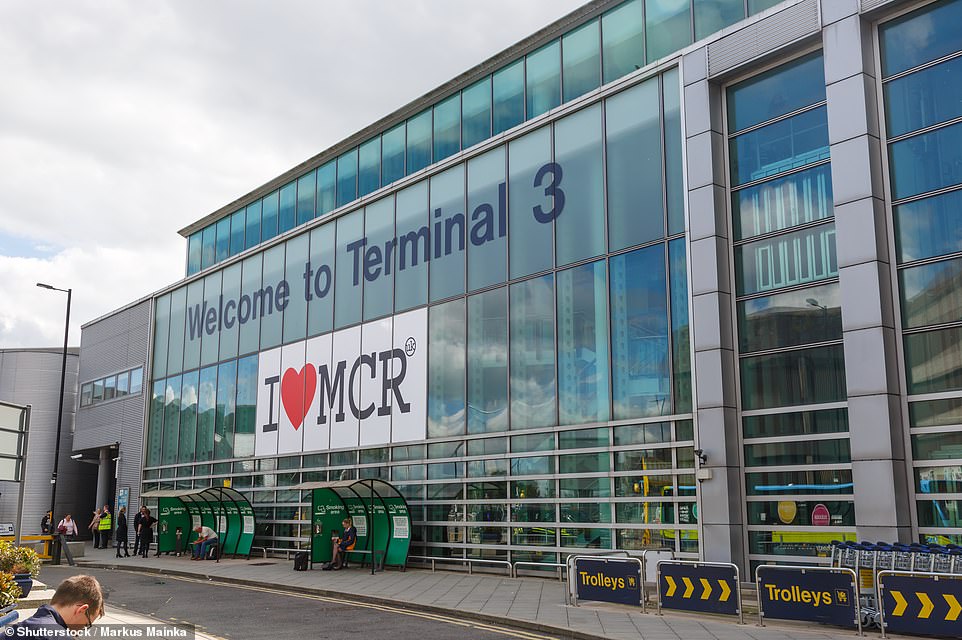 Last-place Manchester Terminal 3 scores a lowly one star for queues at security, seating, prices in shops and the range of shops on offer

AT A GLANCE: WHICH? REVEALS THE UK’S BEST AND WORST AIRPORTS

It manages no higher than two stars in any of the remaining categories.

Travellers dissatisfied with their experience at the terminal described it as ‘chaotic’, ‘heaving’, and ‘an end-to-end shambles’, with many expressing their disappointment at long queue times, not just through security, but even for refreshments, Which? Travel reveals.

Manchester Terminals 1 (18th, 41 per cent) and 2 (17th, 47 per cent) fare marginally better, with customer satisfaction scores of 41 per cent and 47 per cent respectively. Which? Travel says that like Terminal 3, they score just one star for queue times at security, though Terminal 2 distinguished itself as the only Manchester terminal to score three stars in any category, which it achieves both for seating and toilet facilities.

Commenting on the findings, Guy Hobbs, Editor of Which? Travel says: ‘This year we’ve witnessed unprecedented chaos at many of the UK’s largest airports. Travellers reported extensive queues and unhelpful staff, with resources pushed to breaking point.

‘Just a few years ago, travellers may have paid little attention to their choice of airport – but now it may just make or break your trip. Wherever possible, we’d recommend opting for smaller airports, which have generally offered a smoother and less stressful experience for their passengers over the past two years.’

A Manchester Airport spokesperson told Which? Travel: ‘We apologise to any customer who feels their experience was not of the standard we want to deliver over the past two years.

‘The pandemic was the biggest crisis faced by our industry in its history. At one stage passenger numbers at Manchester Airport dropped to just five per cent of normal levels and airports around the world had to cut costs just to survive. Earlier this year, the whole of the travel industry then faced unprecedented challenges as travel restrictions were removed and demand returned rapidly to the market, and Manchester Airport was no different.

‘The hugely competitive employment market and delays in training and vetting meant there were times when we were unable to keep up with passenger demand, which resulted in longer waiting times than we would like. As the summer progressed, and hundreds of new colleagues were welcomed into the business, service levels improved consistently and we are now in a place where we can provide a good standard of service to passengers. For example, in September, 97 per cent of passengers passed through security in under 30 minutes, and this improvement was delivered without the need to impose flight cancellations on our airlines, which meant more than 14million people travelled through Manchester this summer.

‘Airlines, baggage handling companies and others operating on our site faced similar challenges throughout the summer and we are aware this impacted some of the services they provide, such as check-in and baggage reclaim. Even though these are not services we deliver directly, we are closely managing the performance of our partners, making clear the standards we expect from them and providing support where necessary. We are looking forward to delivering a positive experience to all our passengers this winter, and into summer 2023.’

A Heathrow spokesperson, meanwhile, says the survey has ‘inaccurate and misleading conclusions’. They continue: ‘What is clear is that Heathrow has faced unprecedented growth this year, as passenger numbers rose faster and higher than any other European hub, with more than 18million passengers using the airport this summer. We have seen thousands of people joining or returning to work across the 400 companies that operate here. After the two years of international travel lockdown, this was always going to be a tough year and colleagues across the airport have put in a monumental effort to meet those challenges. Our focus continues to be on building back capacity so that we can deliver the consistent, high-quality service our passengers expect at Heathrow.’