From a Beyonce-inspired apartment block in Australia to a VERY skinny New York tower: The world’s 10 best skyscrapers of 2022 revealed in prestigious awards

Designing a skyscraper is a tall order, but the winners of this year’s Emporis Skyscraper Awards have clearly got the hang of it.

In the 22nd year of the annual awards, the top 10 were selected from an international pool of more than 600 skyscrapers that were completed in 2021 and stand at least 100m (328ft) tall.

The top prize goes to Valley, a multifunctional complex with three peaks in Amsterdam that boasts a ‘sheer glass facade and protruding stone-clad windows and balconies resembling a rocky mountain surface’.

The judges say: ‘Valley looks like an oasis in a business district dominated by regular office buildings. It is not only an outstanding architectural statement but also an excellent example of sustainable and climate-friendly building construction.’

Second place, meanwhile, has been snapped up by 111 West 57th Street in New York City, which holds the title of the thinnest skyscraper in the world. The bronze medal goes to the NV Tower in Sofia, Bulgaria, a building that takes its design inspiration from ‘natural crystals and mountains’. 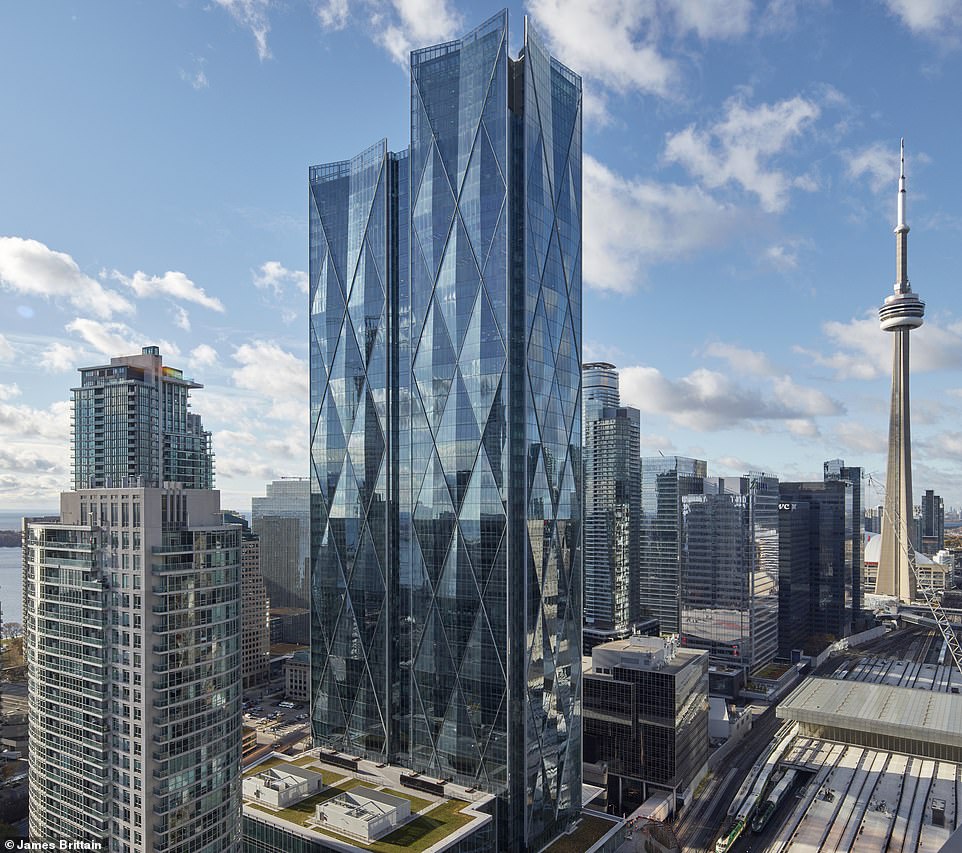 10. CIBC SQUARE SOUTH TOWER, TORONTO, CANADA: This 790ft (241m) building, by WilkinsonEyre and Adamson Associates, lies in the heart of Toronto’s financial district – and has an exterior ‘covered with diamond-shaped cuts of blue glass that reflect sunlight in different colours’ . The 52-storey complex consists of two towers, the second of which will be completed in 2024, a statement notes 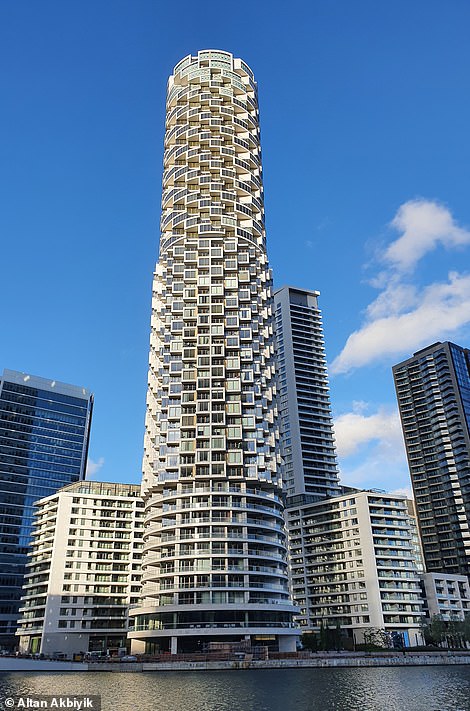 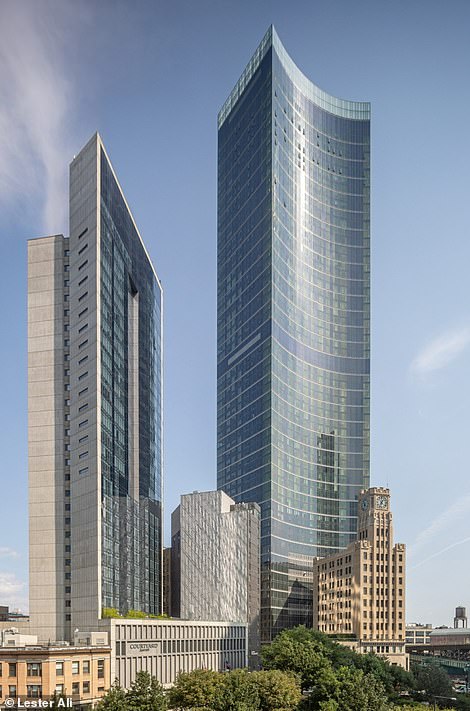 9. ONE PARK DRIVE, LONDON, ENGLAND (LEFT): Situated in London’s Canary Wharf district, this 58-storey residential skyscraper has a ‘distinctive cylindrical shape’, which ‘sets it apart’ from the office buildings in the area, a statement notes. Designed by Swiss architects Herzog & de Meuron, the building measures 672ft (205m) in height. 8. SVEN, QUEENS, NEW YORK (RIGHT): This structure, the work of Handel Architects, measures 672ft (205m) in height and spans 67 storeys, making it the second tallest completed tower in Queens, behind the 778ft- (237m) tall Skyline Tower. Its characteristic shape ‘arises from the concave shaped facade’, says the awards. Residents of the building have access to an app called Spireworks that allows them to change the colours of the lights at the top of certain buildings in New York, altering the skyline 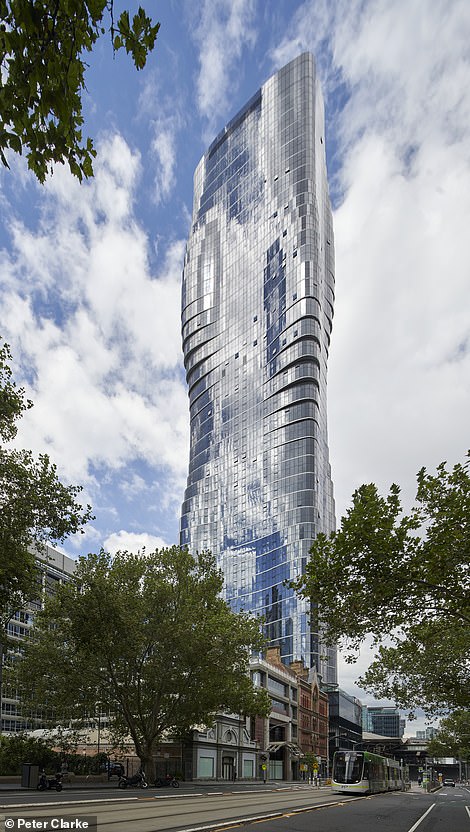 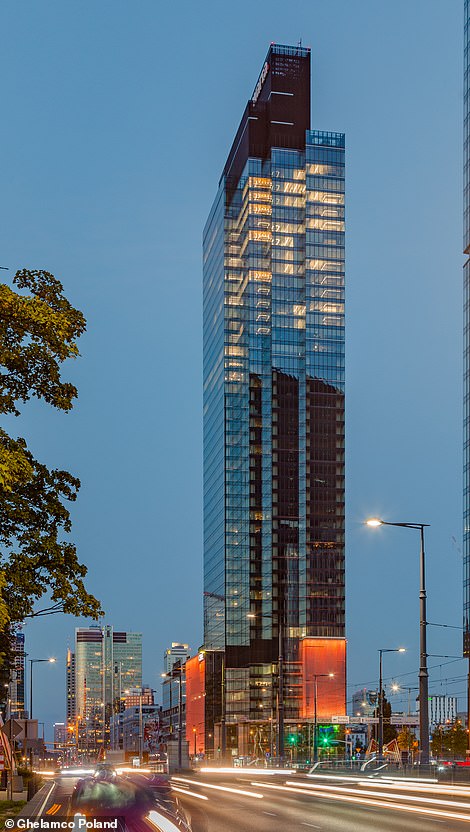 7. PREMIER TOWER, MELBOURNE, AUSTRALIA (LEFT): This 807ft- (246m) tall mixed-use tower – it’s part residential, part hotel – has a curvy shape that the Australian architect firm behind it, Elenberg Fraser, says pays homage to Beyonce’s music video ‘Ghost’. In this, the singer is seen wrapped in billowing black fabric and women writhe inside skintight sheaths. ‘Art and science? You betcha,’ says Elenberg Fraser. Residents of the apartments within the 78-floor complex have access to an exclusive club and luxury amenities such as a garden lounge, outdoor fitness park and a games area. 6. WARSAW UNIT, WARSAW, POLAND (RIGHT): The facade of this 46-storey skyscraper is covered in thousands of tiles that move with each ‘puff of the wind’. Due to the scale-like shape of each tile, the facade has earned the nickname ‘Dragon Skin’, a statement reveals. The 666ft (203m) structure features ‘state-of-the-art technologies such as UV lamps’ that disinfect the interior from viruses such as coronavirus, and it has a BREEAM certificate at the ‘Outstanding’ level, which is the ‘highest possible rating for ecological and socio-cultural aspects of building sustainability’, the awards reveals. Projekt Polsko Belgijska Pracownia Architektury is the architecture firm behind the design 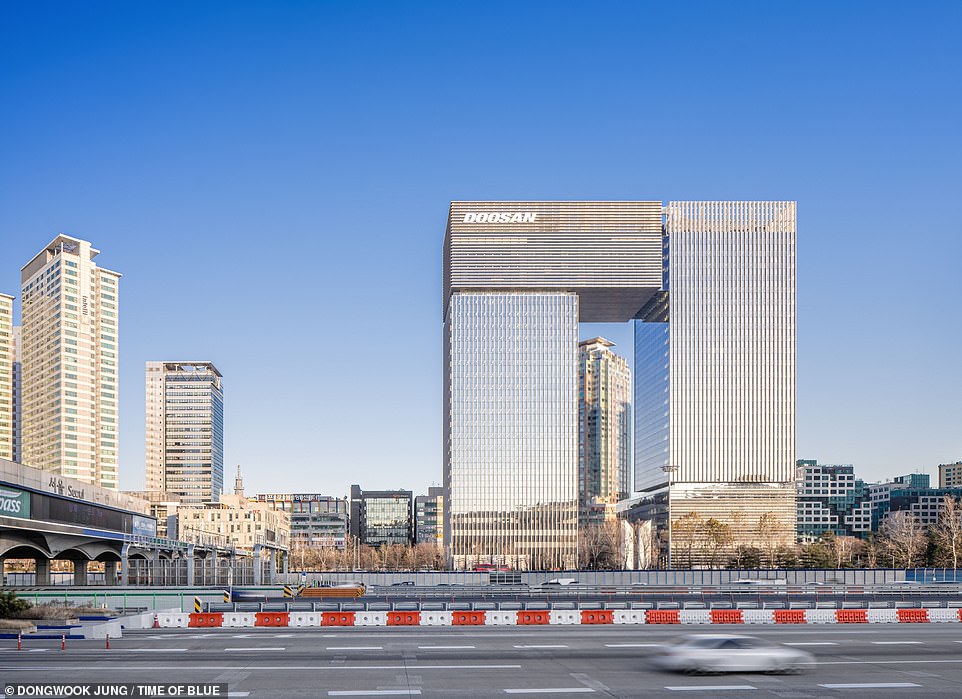 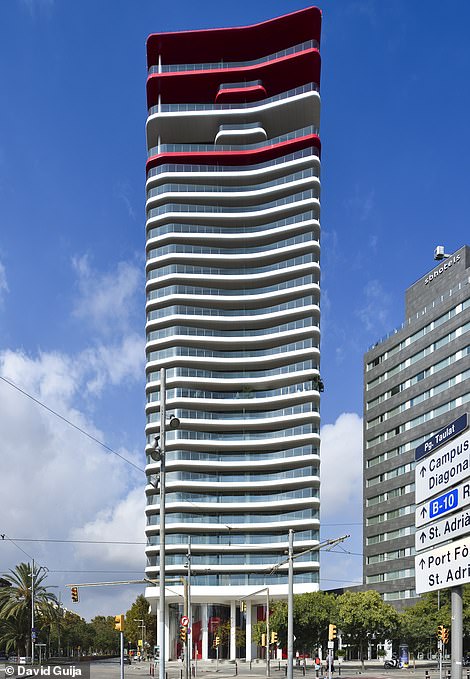 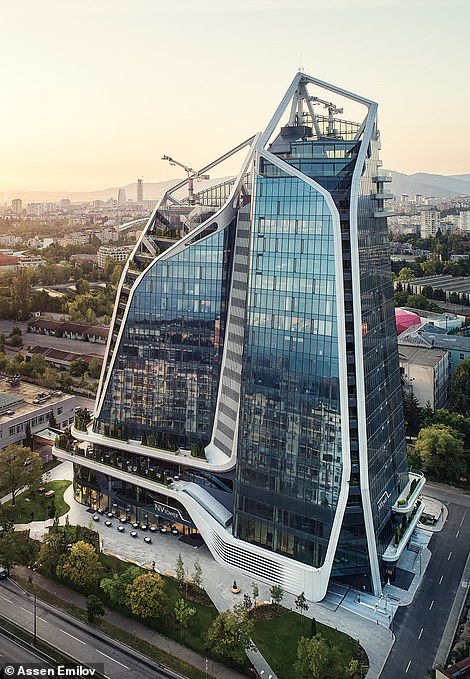 4. ANTARES TOWER, BARCELONA, SPAIN (LEFT): This 27-storey structure, the highest luxury residential building in Barcelona at 341ft (104m), was designed by Studio Odile Decq. A statement notes that it ‘offers great views of the Mediterranean, the Montserrat Mountains and Barcelona’. The judges add that the tower features curved red balconies on the upper floors, ‘which give the building a unique presence on the skyline’. 3. NV TOWER, SOFIA, BULGARIA (RIGHT): The design concept behind the 20-floor NV Tower, dreamt up by A&A Architects, ‘is closely related to mining, the primary activity of its developer, Minstroy Holding’. A statement explains: ‘The building showcases elements reminiscent of natural crystals and mountains and as part of this theme, each floor of the building is named after its own crystal and designed in the crystal’s respective colours.’ There’s landscaping on the roof and each floor has access to landscaped terraces. It’s sustainable too – the waste heat from the server rooms is used to heat the office areas and a recycling system collects and uses rainwater. The judges describe the skyscraper – which measures 351ft (107m) in height – as a ‘holistically harmonious project that architecturally reflects the surroundings and thus fits perfectly into the cityscape of Sofia’. This is the first time in the history of the awards that a project from Bulgaria has made it into the top 10 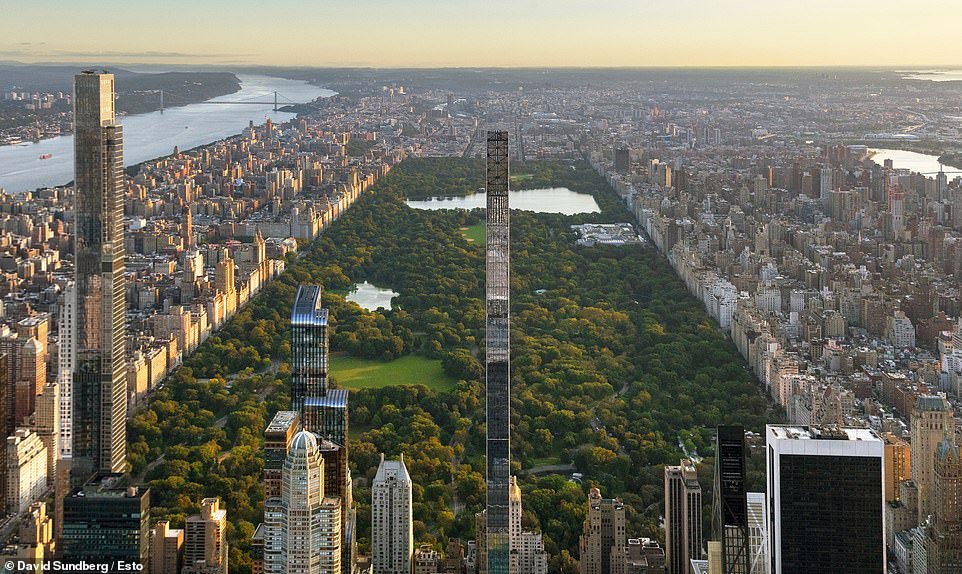 2. 111 WEST 57TH STREET, MANHATTAN, NEW YORK CITY (ABOVE CENTRE): At 1,427ft (435m) in height, this is the tallest skyscraper to make it into the top 10. What’s more, it is currently the third tallest building in New York City and is in the top 30 tallest buildings in the world. Designed by Shop Architects, the 84-storey residential tower is the thinnest skyscraper in the world with a ‘spectacular’ width-to-height ratio of only one to 24. ‘The needle-like tower was built as an addition to Steinway Hall, a historic building from 1925 known as the former home of piano maker Steinway & Sons as well as a concert hall,’ a statement explains. Nicknamed ‘Stairway to Heaven’ because of the shape of the tower’s pinnacle, the structure is embellished with a bronze and terracotta facade, which makes reference to New York’s Art Deco history, the statement notes. The jury was particularly impressed by the building’s ‘elegant and at the same time dramatic shape’, noting that this ‘makes the skyscraper a modern masterpiece… a new landmark to Manhattan’s famous skyline’ 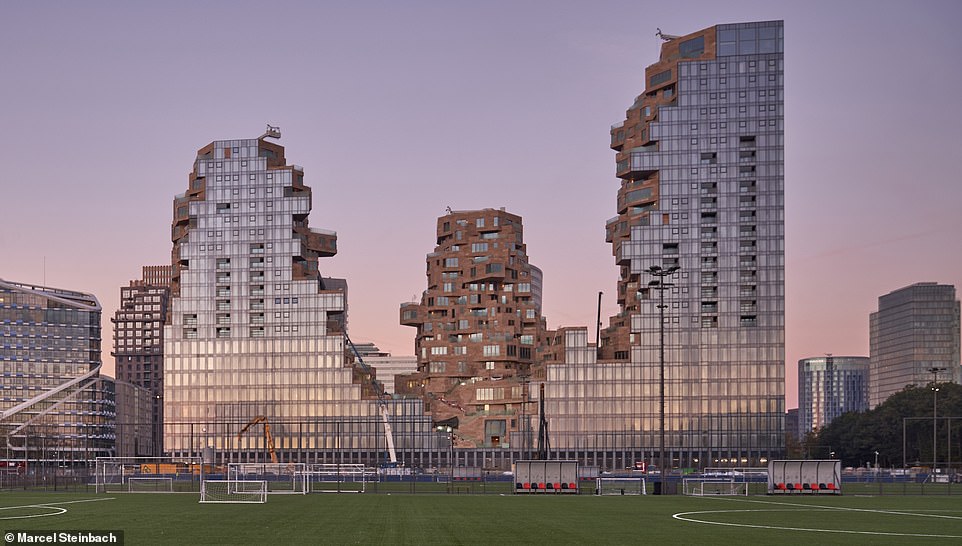 1. VALLEY, AMSTERDAM, THE NETHERLANDS: The gold-medal winner is a typically bold design by Dutch architecture firm MVRDV, which was recently mired in controversy with its disastrous Marble Arch Mound in London, commissioned by Westminster Council and described as ‘bringing shame on Westminster across the world’ by the leader of the council, Adam Hug. In contrast, ‘Valley’ earned lavish praise from the Emporis Skyscraper Awards jury, which said its design is ‘extraordinary and innovative’. The complex is formed of three towers of varying heights, the tallest of which is 26 storeys or 328ft (100m). All the structures have a ‘craggy look’ with ‘jutting elements’ that ensure some units are completely unique. The centre of the complex, which is located in Amsterdam’s Zuidas business district, holds a ‘publicly accessible terraced valley, from which the building owes its name’, a statement notes. Valley comprises offices, apartments, shops, cultural institutions and a bar that offers ‘panoramic views over the city’ – and it has been designed with sustainability in mind. The building will be embellished with 13,000 different plants and trees over the coming years