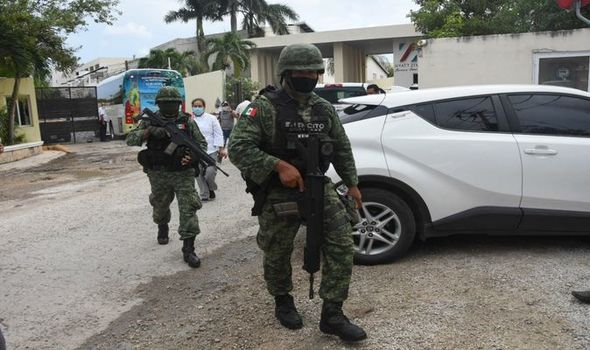 Two men were killed in the devastating violence. Authorities have said the gun violence was a confrontation between two rival drug dealers. It occurred at the Hyatt Ziva in Puerto Morelos, south of Cancun.

In Thursday’s gunfire in Cancun the authorities said no tourists were killed or seriously injured.

About 15 armed men burst onto the beach according to reports and killed a presumed drug dealer.

Local media reported a second presumed drug dealer tried to hide in the hotel but was also killed.

The terrifying incident frightened hotel guests who described running for cover from the sudden gunfire.

Mike Sington, a Hollywood executive, who was on holiday at the resort also tweeted during the incident.

He said: “All guests and employees were told to duck and we’re being taken to hiding places.”

Other guests said they had been enjoying a game of volleyball on the beach when the gun violence broke out.

The five star hotel had reportedly been holding a week of parties to celebrate the Mexican festival ‘Day of the Dead’.

Andrew Krop’s husband, Eric, was at the hotel to sing for an LGBT gathering as part of the celebrations.

Andrew told The Independent that Eric was returning to his hotel after a tequila when he heard about 20 gunshots ring out.

Andrew said: “He ran back into the hotel and ended up in some random room with one of the housekeepers.

“They barricaded the room with mattresses – there were two queen mattresses in the room – and just tried to stay as quiet as possible.”

The latest outbreak of violence follows another tragic gun attack in the Mexican resort of Tulum.

Two women, a California based travel blogger and a German tourist, were killed in the gunfire at the Tulum restaurant.

Anjali Ryot, an Indian national, had 42,000 followers on her travel blogging account where she shared photos of her trips.

Authorities said the shooting at the Mini Quinta entertainment zone was an “armed clash between criminal groups dedicated to the sale of drugs.”

Tourists in the area of the Cancun shooting have been advised to follow the advice of local authorities. The beautiful Cancun area is extremely popular with tourists but has sadly been plagued with violence between drug cartels.

Due to their strategic location and customer base, tourist resorts have become territory for cartels.

The UK Government has not updated its travel advice for British tourists following the incident but its advice on security in Cancun states: “The Mexican government makes efforts to protect major tourist destinations like Cancun, Playa del Carmen, Cozumel, Los Cabos, Puerto Vallarta and Nuevo Vallarta.

“These areas have mostly not seen the levels of drug-related violence and crime experienced elsewhere in Mexico.

“However, since 2017 there have been a number of reported shooting incidents and other incidents of violence in these areas, including in locations popular with tourists.

“If you’re visiting any of these areas, you should monitor local advice, remain vigilant and follow the advice of the local authorities and your tour operator.”