Stand on the secluded sandy beach in Happisburgh and you’ll be looking out across submerged Doggerland, an area that once connected Britain to mainland Europe.

Rising sea levels in about 6500 BC reduced it to a series of low-lying islands before flooding the entire region. Fishermen trawling this part of the North Sea – named after 17th Century Dutch fishing boats, or doggers – have since netted partial remains of mammoths, bears, hyenas and prehistoric tools and weapons.

And on the beach at Happisburgh (pronounced ‘Haysborough’), the earliest evidence of the human occupation of Northern Europe was discovered in the form of 900,000-year-old footprints. Now a recently developed hike, the Deep History Coast Discovery Trail, lets you follow in the footsteps of our ancient forebears and delve into the world they inhabited. 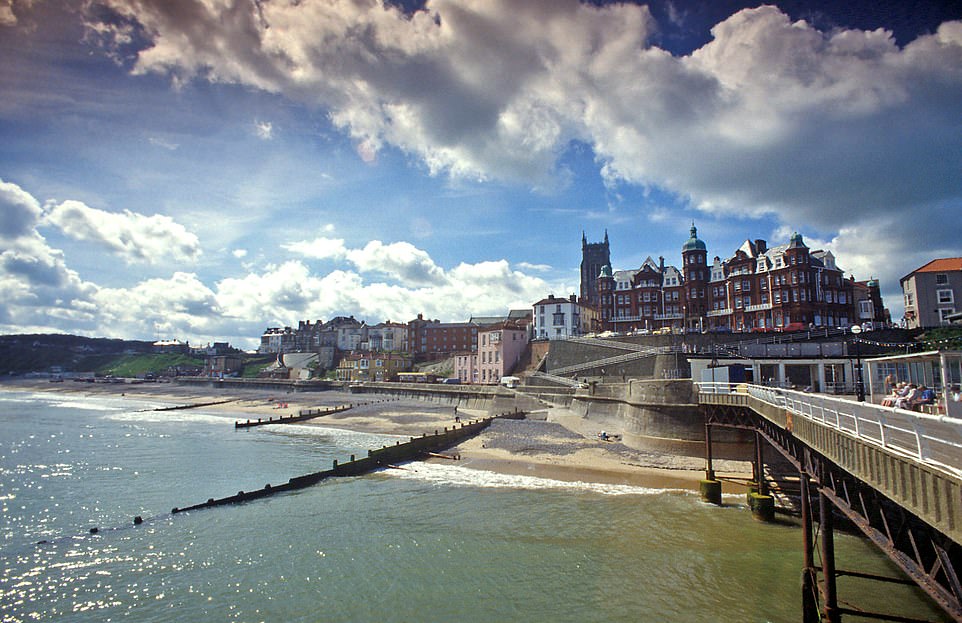 The trail begins at Weybourne, a pretty, shingle-beach resort on the line of the North Norfolk steam railway which, in season, puffs its way between smart Sheringham and quaint Holt. The trail stretches for 22 miles to Cart Gap, following the line of the coastal path.

The newly opened luxury boutique and spa hotel The Harper (theharper.co.uk), housed in the flint barn of a former glassworks at Langham, is a good base from which to explore.

The first leg of the trail takes you across a crest of cliffs stretching along the shoreline to the Victorian market town of Sheringham. From here, you climb a path to one of famously flat Norfolk’s biggest hills. The diminutive-sounding Beeston Bump – all 207ft of it – was formed by residual sand and gravel when ancient glaciers melted.

The trail dips down to West Runton beach, famous for its multi-hued, fossil-studded cliffs and a popular spot for fossicking. Look out for belemnites, fossilised sponges and tiny pieces of amber.

It was on West Runton beach 30 years ago that a couple discovered a large bone that turned out to be from a steppe mammoth.

This beast would have weighed ten tons and stood 15ft tall. Excavations revealed 85 per cent of its skeleton – the largest near-complete mammoth skeleton ever found in Britain. The West Runton mammoth is now on display in nearby Cromer Museum.

The Deep History Discovery Trail app allows walkers a virtual encounter with this 600,000-year-old beast. It also provides an interactive link with 11 discovery points along its route which delve into North Norfolk’s coastal heritage.

One, on the front at Overstrand, just east of Cromer, illustrates the importance of flint to the area. In the 18th Century, the gun-flint industry was thriving – flintlock guns were the main weapons of European armies – and it’s much in evidence as you stroll around the pretty village. 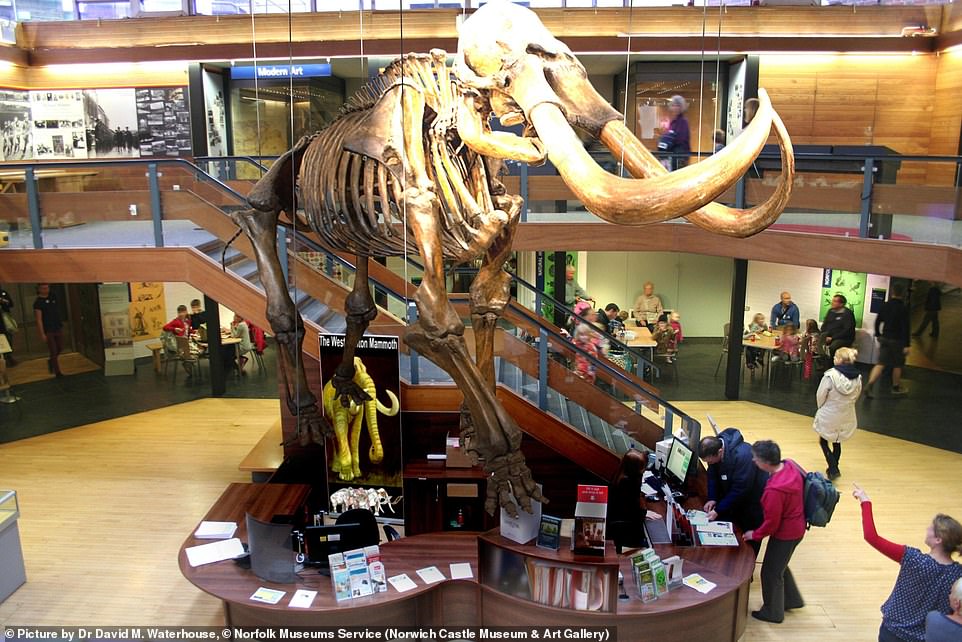 The West Runton mammoth is the largest near-complete mammoth skeleton ever found in Britain. It is on display at Cromer Museum

It was used to build houses, was set into paving and was incorporated into the tower of the church of St Martin and the walls of the imposing Overstrand Hall, designed by Sir Edwin Lutyens.

The Queen and Stephen Fry are among the area’s more recent residents, and newcomers are lured by vast sandy beaches, quirky seaside communities and picturesque market towns. Nearby Burnham Market boasts so many galleries, boutiques and trendy eating places that it’s become known as Chelsea-on-Sea.

Mid-way along the trail, the flinty tower of Cromer’s 14th Century church guides you towards the Victorian resort, where alleys bustle with pubs and restaurants serving famous Cromer crab.

No1 Cromer (no1cromer.com), a takeaway fish-and-chip shop with an upstairs restaurant, is the ideal place to tuck into a crab burger served with a view of the pier. The Victorian structure has survived storms, tidal surges and even a suggestion by the Government to blow it up during the Second World War to stop it being used by the Germans as a landing strip. 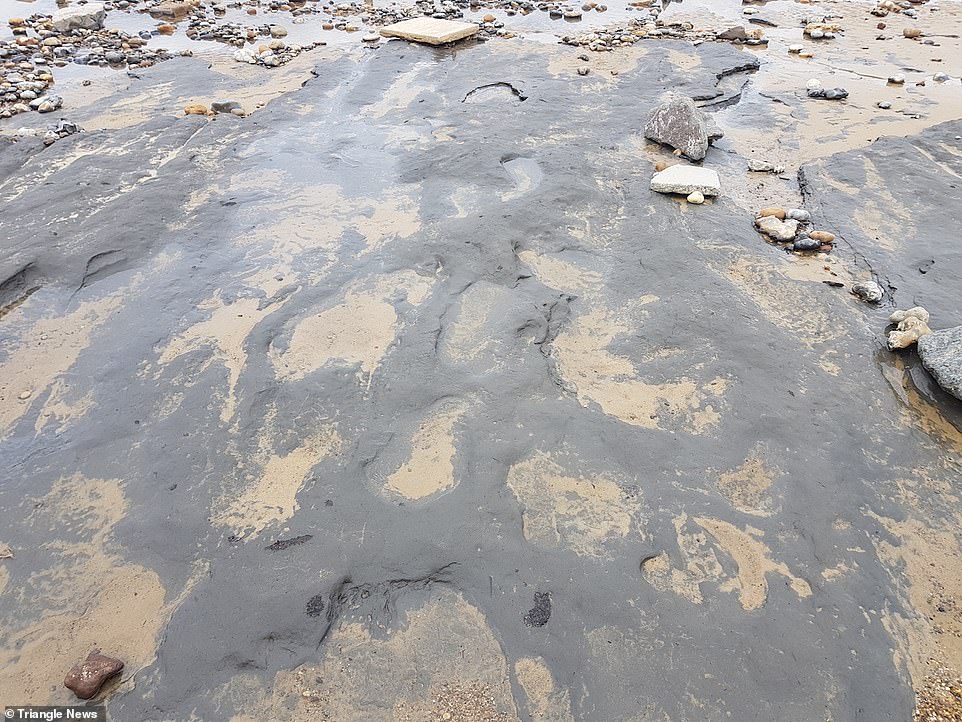 Sands of time: The ancient footprints at Happisburgh are said to be the earliest evidence of the human occupation of Northern Europe

A stone’s-throw from the centre but tucked away in its own gardens, The Grove (thegrovecromer.co.uk) is an elegant Georgian hotel, once home to the Gurneys, a prominent local Quaker dynasty. Look out for the flint-walled bathroom in one of the double bedrooms.

Much of the discovery trail can be walked along the shoreline, depending on tides. Get them right and from Cromer you can reach the pretty village of Mundesley, which boasts a tiny maritime museum housed in a former coastguard lookout and said to be one of England’s smallest museums. There’s also a huge mammoth’s tooth on display at the discovery point here.

The trail ends at Cart Gap, close to Happisburgh, where in May 2013 a storm exposed mysterious hollows on the beach. These were revealed as the footprints of a small group of human adults and children roaming the mudflats of what was a river estuary 900,000 years ago.

The discovery made Happisburgh one of the most important archaeological sites in Europe, and dramatic erosion has continued to lead to new finds. 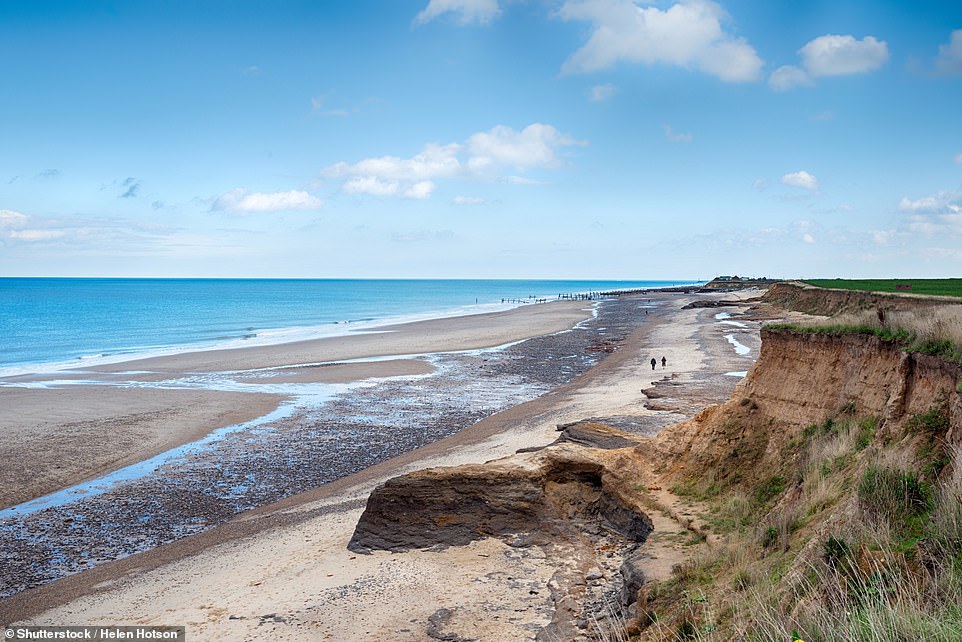 Stand on the sandy beach in Happisburgh and you’ll be looking out across submerged Doggerland, an area that once connected Britain to mainland Europe

On the cliffs above the beach is The Hill House Inn (hillhouseinn.co.uk), dating from 1550. Sir Arthur Conan Doyle stayed here and penned a series of Sherlock Holmes stories. The on-site microbrewery, The Dancing Men, is named after one of them, and you can order a pint of Dancing Men ‘Cliffhanger’ or stay in one of the self-contained annexe rooms.

The Deep History Discovery Trail is already attracting new visitors to the area. But the irony is that although erosion is revealing new archaeological sites, it is also threatening the very existence of Happisburgh and other towns along this stretch of coastline.

In about 25 years’ time, The Hill House Inn itself is likely to become just another chapter in North Norfolk’s recent history.