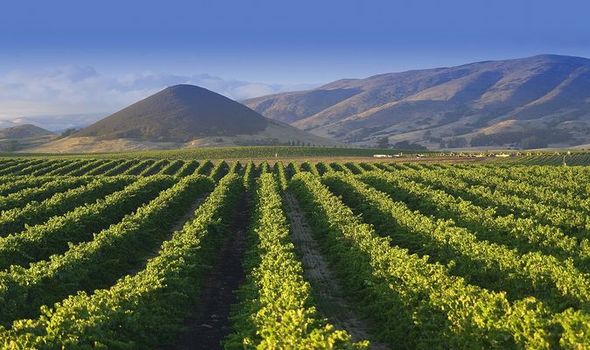 Situated on the Pacific coast midway between Los Angeles and San Francisco, its laid-back vibe is exemplified by its convenient abbreviation, SLO CAL. With its beautiful beaches, world-famous wineries and historic sites, the area is well worth exploring, either as a destination in its own right or as a stopover while making the classic Pacific Coast Highway pilgrimage between California’s twin big cities. Encircled by green hills, San Luis Obispo itself was founded in 1772 by Spanish Franciscans on land occupied by the native Chumash tribe.

The white mission chapel still stands at the centre of the low-rise town which retains a homely Hispanic feel, with no buildings higher than four storeys.

The three main streets are lined with ficus and eucalyptus trees, while independent coffee shops, craft breweries and art galleries abound, making the single token McDonald’s something of an anomaly. It can also get pretty lively thanks to the 21,000 students at the local Cal Poly university who make up half the town’s population.

Pre-pandemic, we stayed at the newly revamped Hotel Cerro which, with its exposed brickwork, vibrant local artwork and contemporary furnishings, typifies the blend of cool style and culture of SLO itself.

From its rooftop pool with views of the surrounding hills, to the outdoor “edible garden” which supplies veg for the kitchen, the attention to detail is outstanding, and no surprise when you learn that the British couple who run the place also developed Necker Island for Richard Branson.

Just outside town on Route 101 is another very different hotel, one so extraordinary it’s a tourist attraction in its own right.

Madonna Inn, opened in 1958, is a pseudo-Alpine styled confection where good taste has been replaced by chandeliers, fairy lights and excess all areas. It has 110 guest rooms, each decorated with OTT extravagance where the common theme is pink. Pink carpets, pink walls, pink lampshades, plus pink cakes and pink sugar in the dining room… it’s like being drowned in blancmange.

The room we were shown, with its eye-searing sofas and stone walls, looked like Mae West had been let loose on refurbishing the Flintstones’ house.

After all that you might need a drink to calm your senses and, with SLO CAL being wine country, you are spoilt for choice. More than 250 wineries are dotted around the county, and thousands of acres of hillsides are covered with vines producing worldclass cabernets in the warm, arid areas near Paso Robles and smooth pinot noirs nearer the Pacific-cooled coast.

Breweries, distilleries and cider houses are also booming and we made several visits to taste the local wares. From the dozens of craft beers at Firestone Walker in Paso Robles to the bourbon and whisky produced by the funky SLO Brew company, there’s no shortage of young entrepreneurs creating success stories as they blend traditional fare with new flavours.

As far as eating is concerned, our two most memorable culinary excursions were, coincidentally, both at restaurants masterminded by food fanatic Robin Covey and his ex-wife and business partner Shanny. At Robin’s – a cosy, restored adobe home in Cambria – I opted for a succulent lamb shank falling off the bone with a velvety 2015 pinot noir from the local Cutruzzola vineyard.

Back in San Luis, we dined at Novo, which has a sun-dappled terrace cantilevered over the local creek. The highlight was juicy seared scallops with braised pork belly and a bottle of fruity Aequorea pinot gris.

In an attempt to redress the calorie intake we took to the water for an hour’s kayaking at Morro Bay, a state-protected marine area in the shadow of Morro Rock, with an estuary enclosed by a spit of land created by the military in the Second World War to practise landing exercises. It teems with wildlife and we got up close to otters floating on their backs but kept a safe distance from the intimidating sea lions.

For many Californians, life revolves around beach culture and one evening we joined them at Grover Beach, a long stretch of sand where locals can drive their monster 4×4 trucks down to the water, light fires and shoot the breeze over a few beers.

We huddled around our blazing logs in the chill of a February night fortified by a tub of warming clam chowder from the nearby Splash Cafe. The off-roaders’ searchlights cutting through the sea mist was an atmospheric sign-off to the day.

Next morning, we headed north along Highway 1, stopping to marvel at the “town” of Harmony (population 18) and the Piedras Blancas elephant seal rookery, a beach crowded with bus-sized monsters and their offspring.

We then checked into the Cavalier Oceanfront RESORT in San Simeon with its sweeping views over the Pacific. It’s ideally situated for a visit to the top attraction in these parts, the magnificent and opulent, yet eccentric Hearst Castle. Built on a 1,600ft hilltop between 1919 and 1947 by publishing billionaire William Randolph Hearst, it is a staggering monument to unlimited spending power and unrestrained ambition (see below left).

Roaring Twenties and 1930s, Hearst would fly in Hollywood stars and political heavyweights to his private airstrip, then ferry them by car up the steep road he’d had constructed to his own personal Eden. There, guests such as Charlie Chaplin, Clark Gable, the Marx Brothers, Churchill and President Coolidge would dine, watch the latest movies in a private cinema, play tennis, swim in the dazzling pools and admire Hearst’s private zoo.

Now owned by the state, it is one of California’s must-see sights, but San Luis Obispo County. has so much more to offer – just don’t expect anything to happen in a hurry. As the local motto says, life is too beautiful to rush.